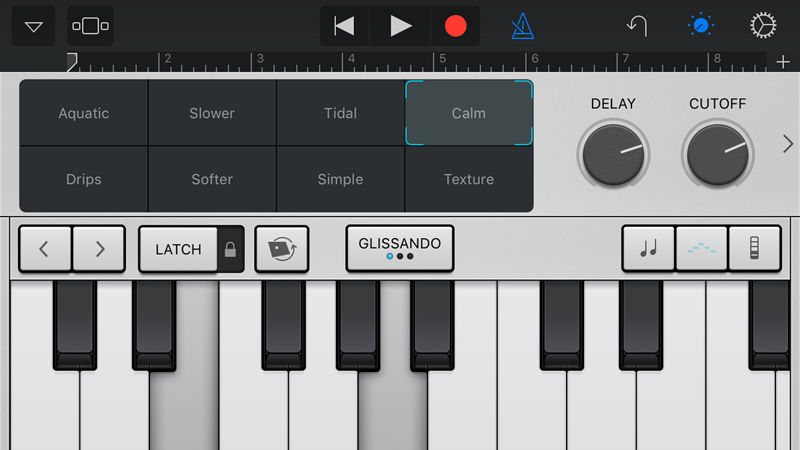 GarageBand is an app most people have probably played with at some point. For a great many iOS device owners, it’s free, and even for those who’ve not activated a device after September 2014, it only costs five quid. But GarageBand on iOS has also for much of its history sat in an awkward space, trying to be all things to all users. With this latest update, there’s a danger of complexity due to the app’s growing range of features, but the interface design continues to be strong, ‘hiding’ advanced controls from those who won’t necessarily need them, and retaining the impression of an app that remains approachable and straightforward. And with the new Chord Strips and sound browser in particular, GarageBand further cements itself as an essential app for anyone keen to get started in making music on iOS. But where GarageBand has made the biggest gains is in the pro space. It’s now packed full of contemporary synth sounds, has hugely improved track controls and effects, some highly useful round-tripping to Logic, and the potential for great things with AU support. There are still shortcomings – song arrangement remains a weak spot, and we’d kill for an ‘unmute/unsolo all’ button – but with this update we can confidently say GarageBand for iOS is now an essential app for jobbing musicians too.

Welcome to our GarageBand for iOS 2.2.1 review, in which we test, rate and review the performance, ease of use and new features in Apple’s music production app for iPad & iPhone. You may also be interested in our  Logic Pro X review, which looks at the latest update to Apple’s desktop music app.

On the desktop, GarageBand is more or less ‘Logic Not Pro’, a consumer-oriented take on music-making. Although it shares certain features with spendy cousin Logic Pro X, GarageBand is a freebie intended as an approachable entry-level tool for newcomers and a sketchpad for pros. Even so, many musicians find GarageBand’s usability and feature-set good enough for working up entire albums.

On iOS, things are different. There’s no Logic for iPad and iPhone, and so GarageBand bears the responsibility of catering for all. Initially a fairly ambitious digital audio workstation for mobile, GarageBand subsequently expanded in scope, adding features like configurable guitar amps and a beginner-friendly loop grid player.

For songwriters, there’s a capable multi-track recorder and MIDI editing. Those who play live are catered for by onscreen instruments to tap and swipe. And a helping hand for newcomers exists in the form of smart instruments that automate guitar riffs and ensure melodies remain in key.

But with version 2.2, GarageBand is pushing further at the extremes, with features designed to appeal to newcomers and pro musicians alike. In doing so, many perceived limitations of the app have fallen away. In short, this is an impressive update. Here’s why…

The sound browser – that carousel of instruments that appears when you add a track – had grown unwieldy. In this update, instruments are now intelligently grouped. For example, ‘Amp’ houses buttons for creating a new clean, distorted or bass guitar track. Under ‘Strings’ are options for Smart Strings, note-playing and scales. And ‘Keyboard’ offers Smart Piano, the sampler and the new Alchemy Synth.

Still, any shortcomings are forgotten on discovering the ‘More Sounds’ buttons. Tap one of those to rifle through available sounds for the current track type you’re considering, quickly selecting the one you want, rather than you first having to create the track, wait for it to appear, and only then get to pick your instrument. 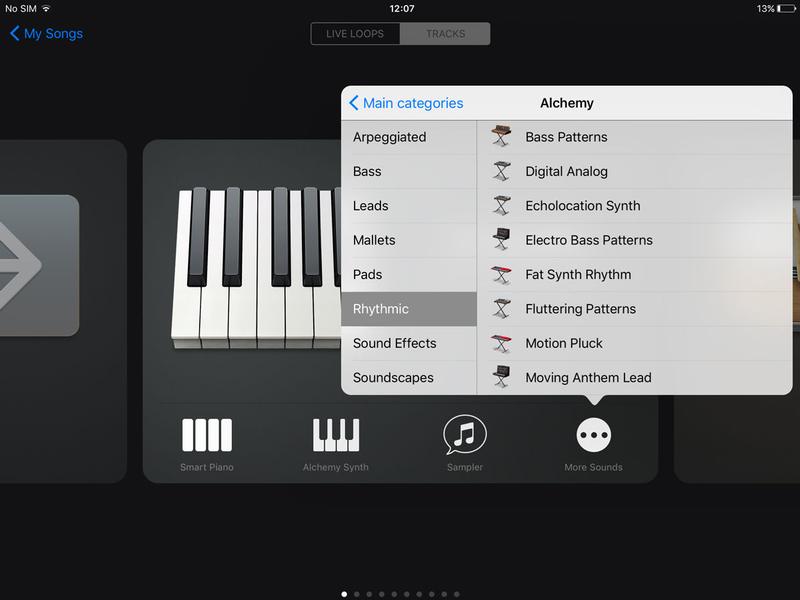 Logic Pro X users should be familiar with Alchemy. Previously a separate product that cost in the range of £200, it in 2015 was bundled with Apple’s pro music-making app. As far from a basic add-on as you can get, Alchemy is a serious heavyweight lauded by many as one of the best synths in existence. And it’s now inside GarageBand for iOS. Sort of.

In effect, Alchemy here is to the Logic version much like GarageBand itself is to Logic: a stripped-back, simplified take, designed to be usable and immediate. But that doesn’t mean it’s limited – you might not get all of the control and sonic manipulation enjoyed by Logic users, but Alchemy on iOS has a ton of presets, the same core engine, and plenty of buttons and dials to mess around with.

The end result heavily resembles what you get in the Smart Controls section of an Alchemy track within Logic itself. For each preset, you can adjust individual properties using dials, select or morph between variations on the sound using an eight-way transformation pad, and make further tweaks using two X/Y pads. Had Alchemy just been a bunch of new presets, that would have been impressive enough, dealing instantly with GarageBand’s propensity towards cheesy rather than contemporary keyboard sounds; but here you get a synth straightforward enough for newcomers, but with enough power for veteran knob-twiddlers to make the sounds their own. 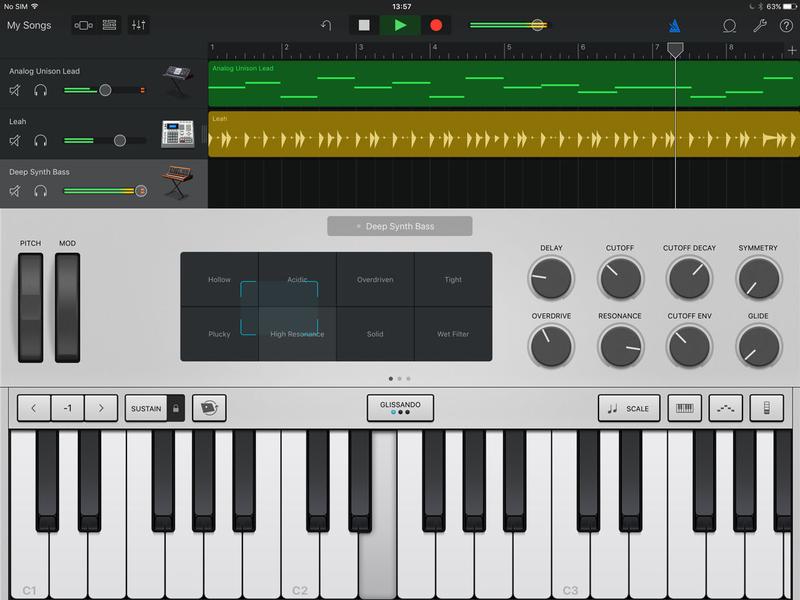 One of the weakest areas in GarageBand was effects. Tracks could have echo, reverb and a compressor applied, and that was about it. This has all dramatically changed. The Track Controls button now opens a slide-in panel that houses menus with plenty of expansion potential.

With Plug-ins & EQ, you can add up to four effects to any track, such as chorus, overdrive, and bitcrusher. And rather than a single slider, you get granular control – reverb, for example, has separate sliders for predelay, spread, reverb time, high cut and wet/dry mix. Visual EQ has also arrived from GarageBand’s Mac incarnation, and provides an intuitive, tactile way to adjust bass, mid, treble and gain settings on any track. If anything, it works better on iOS than Mac, due to you interacting with the equaliser settings using the touchscreen. 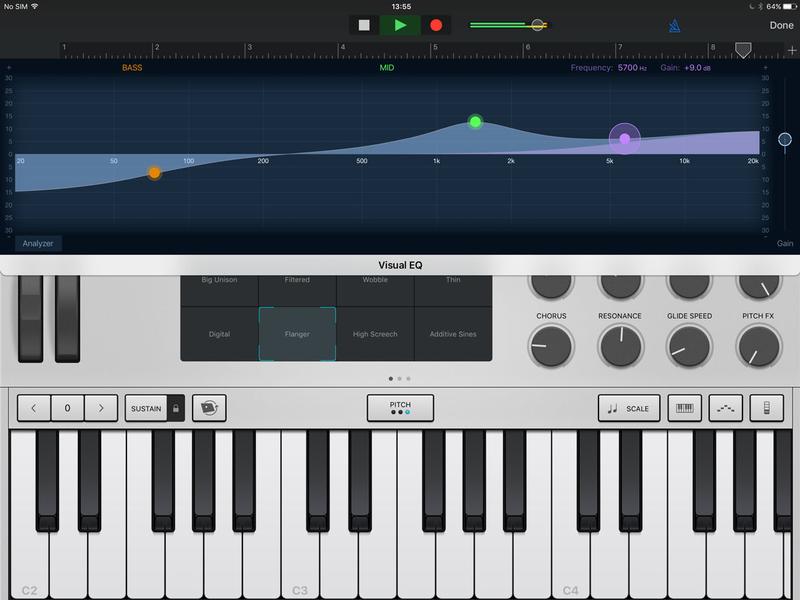 Elsewhere, there are new effects when recording audio instruments. Previously, you were stuck with eight, most of which were awful. These are now relegated to a ‘fun’ tab, and a new ‘studio’ section houses advanced effects setups for a wide range of input, from drums to vocals. These can be immediately tweaked using on-screen dials, but you can also make finer adjustments to each setup’s component parts using the aforementioned section within the Track Controls panel. 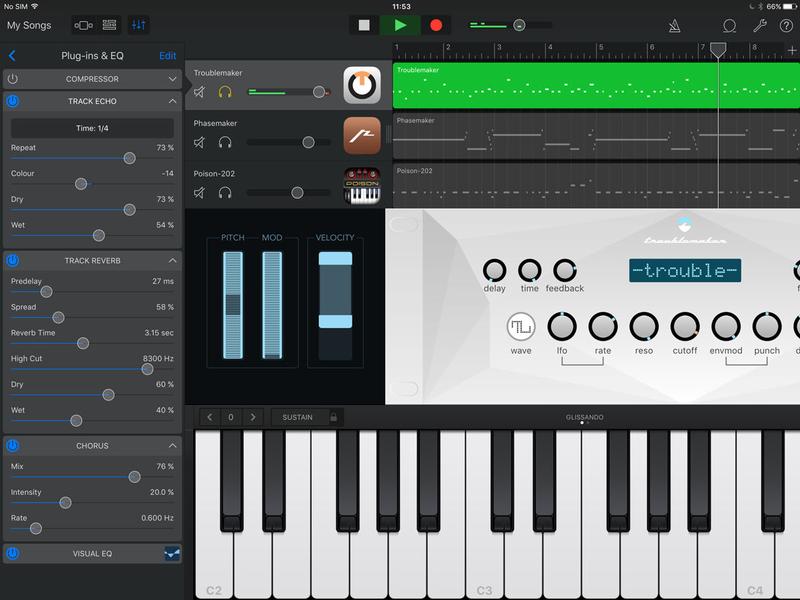 Read next: How to use the editing features in Garageband for iOS

Audio Units (AU) plug-ins process audio and are common on the Mac for integrating external instruments and effects into Logic and GarageBand. Now, GarageBand for iOS has added support – and that’s a big deal.

There had already been some integration of audio apps on iOS, with Apple’s Inter-App Audio and the third-party Audiobus enabling a certain amount of virtual wiring. But with GarageBand, this essentially resulted in recording external instruments as audio waveforms. With AU support, you can instead load such things inside GarageBand. 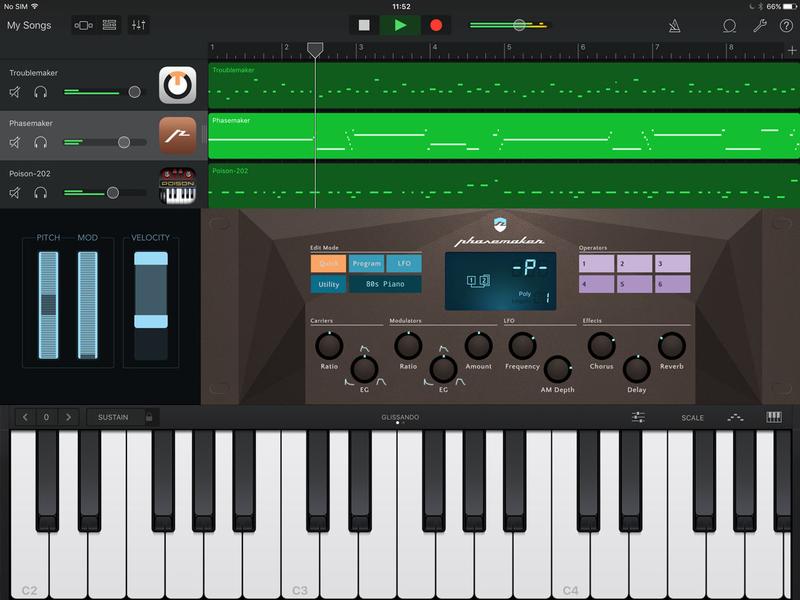 This means apps like Poison-202, Phasemaker and Troublemaker behave like any other GarageBand instrument, aside from using their own interfaces for things like selecting presets. Add them as AU tracks, hit record, and you end up with MIDI data rather than a waveform, which can be edited on a per-note basis, and then further enhanced by way of GarageBand’s effects.

AU support has the potential to transform the iOS music-making landscape, although it’s early days. There are few AU iOS apps, and so we very much hope the likes of Moog and Korg get on board soon. We also suffered some problems during testing. Adjusting presets in an attached AU effect was cumbersome and required removing and re-adding the effect in Track Controls. And although we got projects with several AU instruments happily running on an iPad Pro, some refused to open on an iPhone when said tracks were downloaded from iCloud. It’s possible this was due to memory limitations, with Audio Units pushing the host hardware too hard.

Read next: How to make a song with GarageBand on iPad & iPhone

When it comes to recording audio, the new GarageBand has innovations beyond AU support. Chord Strips replace the standard piano-style keyboard with strips that enable you to play chords with a single tap, notes that are always in key, or just stab autoplay and let GarageBand output pre-defined looping riffs. These have been in GarageBand for a while, as part of the Smart Keyboard track type, but are now accessible from any keyboard instrument. This boosts accessibility for beginners, but is also a potential boon for songwriters – after all, the Chord Strip’s chords can be edited. 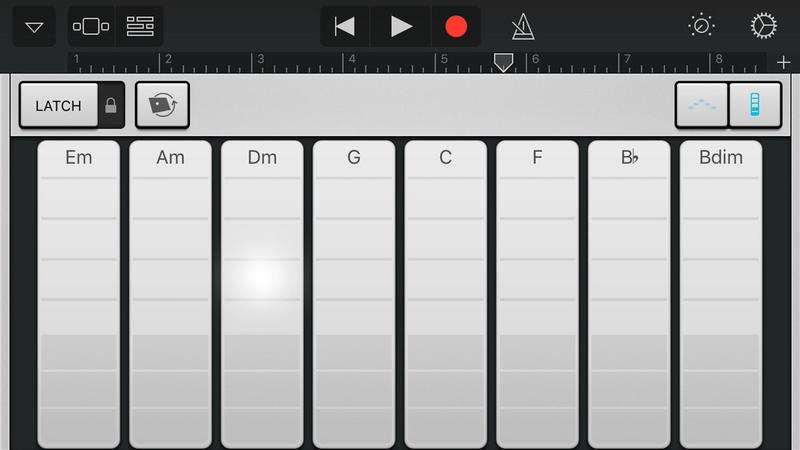 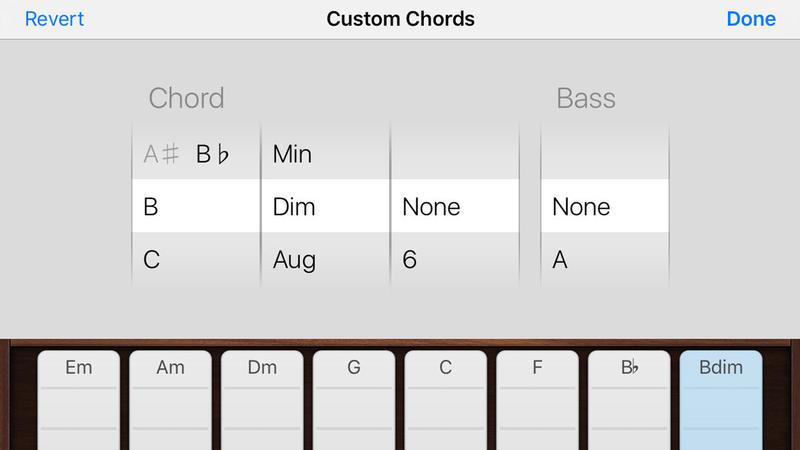 Elsewhere, GarageBand also finally gets multi-take recording. For some reason, it’s buried deep in Track Controls – tap that button, then Track Settings > Recording > Multi-Take Recording. Once you do so, you can loop a live recording, preview your takes, and ditch all but the one you want to keep (or retain several variants on a riff, until you decide on the one you want.)

This is particularly welcome when recording live instruments: MIDI data can later be edited, but it’s tougher to mess around on iOS with recorded waveforms (such as guitars and vocals). It’s great to be able to loop a vocal line or guitar riff, knowing that you don’t have to nail it the second you hit record.

GarageBand for iPad & iPhone review: The new notepad and some clever Logic integration

Two other new features warrant mentioning. GarageBand now includes a built-in notepad, which Apple suggests can be used to add comments or lyric ideas to your songs. It’s hidden away in the Settings menu and feels under-baked. On iPad – and especially iPad Pro – it’s ludicrous such potentially useful content can’t be displayed on-screen alongside whatever else you’re doing. And since GarageBand doesn’t support Split View, the notepad is something that could have been hugely useful. Right now, it just isn’t. 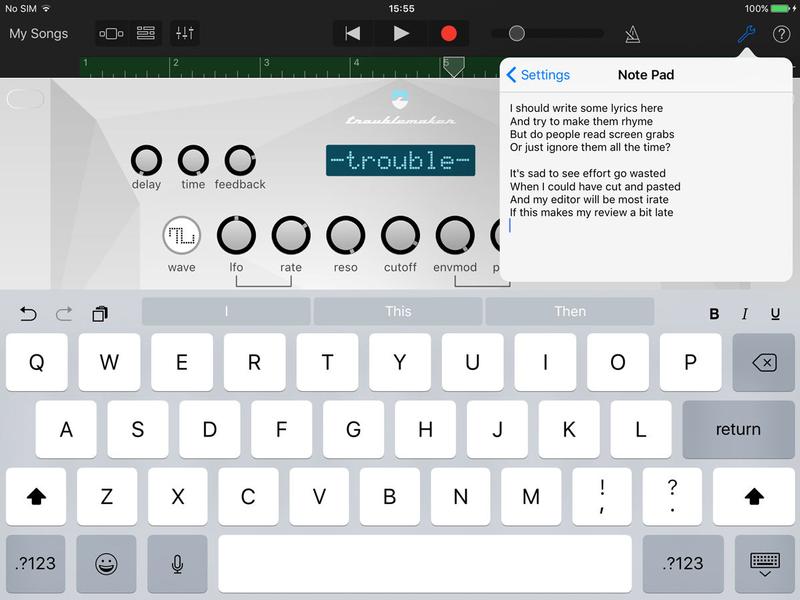 Much better is new round-tripping with Logic. Using the pro app, you can mixdown a song to iCloud, fling it at GarageBand for iOS, listen on the move, and add new parts. When you send all that back to Logic, new tracks show up in the project alongside existing ones, ready for further work. For musicians deeply immersed in Apple’s ecosystem, this is one of those ‘and another thing…’ features that could turn out to be huge; it frees up auditioning, basic editing, and updating Logic projects from the desktop, enabling you to do all those things right from an iOS device.