It’s disappointing that despite the upgrade to a faster SSD the Thunderbolt option only unlocks little more than half of its potential. The USB 3.0 connection picks up some slack though, not just faster in operation but essential if you need to connect a display to a MacBook Air, for example, since this would take over the only available Thunderbolt port. 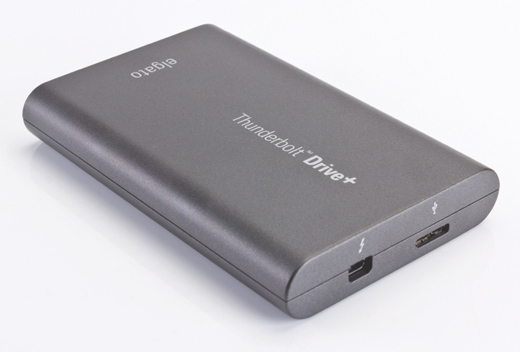 The Elgato Thunderbolt Drive+ is the newly revised edition of Elgato’s portable storage device, the world’s first bus-powered Thunderbolt drive. Originally available in either 120 or 240 GB form, the new plus version now comes in 256 and 512 GB capacities. The other principal change is the addition of USB 3.0 as an alternative to its single Thunderbolt port.

It’s a weighty affair, made from two solid shells of cast aluminium that encase a 2.5in SSD inside, all finished in dark metallic paint. Beware of knocking this one though, as the paint will chip. There’s no carry case included, but you will find one of each cable in the box.

The solid-state storage inside is now a faster SATA Revision 3 device, a Plextor M5 Pro that received the Best Buy award in a recent PC Advisor group test, and found to deliver over 540 MB/s sequential read speeds and greater than 100k IOPS.

This drive uses a Marvell controller, which allows Plextor to append its True Speed rating – quite unlike the previous SanDisk SSD that Elgato fitted, whose SandForce controller would slow down when tasked to write compressed media files.

Thunderbolt is by far the faster interface, but here we saw it as the poor relation against the drive’s newly available USB 3.0 option. With the latter connection this drive could muster 434 MB/s average sequential read speeds, and 357 MB/s for writes.

Using the Thunderbolt connection, the Elgato’s speed dropped to 380 reads and 328 MB/s writes. These are still usefully quick speeds, but considerably below what the bare drive and the Thunderbolt standard are capable of delivering, if they weren’t starved of enough bus power to include suitable supporting electronics.

In our random write test of small files, both connections showed excellent scores – averaging 179 (USB 3.0) and 170 MB/s (Thunderbolt). This indicates superb all-round performance and even suitability for use as a fast boot drive.