You’ll have to spend a few seconds reformatting it for use with your Mac, but apart from that it’s hard to fault the My Passport Slim. It’s very slim and light, and provides good performance, along with plenty of storage space at a competitive price.

The new My Passport Slim isn’t designed specifically for use with Macs, as some of Western Digital’s drives are, but it’s still a good option if you want a compact, lightweight backup drive for your laptop.

As the name implies, the My Passport Slim is the most compact of all WD’s Passport range, measuring just 12.3mm thick, 80mm wide and 110mm long. It only weighs 134g too, so you can slip it into a bag or a jacket pocket and carry it around with no trouble at all. It’s quite neatly designed, with a sturdy aluminium top panel that also matches the metal design of most current Mac models. Our only complaint is that the status light that tells you when the drive is in use is tucked right around the back, alongside the USB 3.0 interface, which means that you can’t see it clearly. 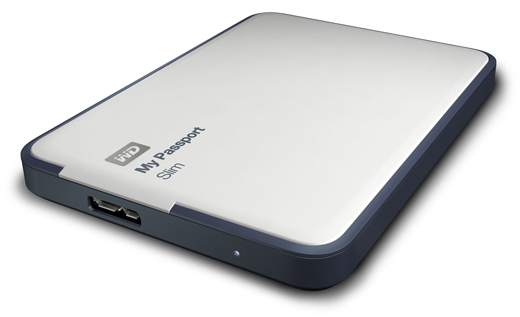 There is currently just one version of the drive available, with 1TB storage capacity. This costs £120.00 if you buy it direct from Western Digital’s web site, but we’ve seen it on sale at other online stores for around £80.00, which is a good deal for a 1TB drive.

The My Passport Slim arrives formatted using the Windows NTFS format, so you’ll need to use Apple’s Disk Utility to reformat it for your Mac, but that will only take a few seconds so it’s not a big problem. The backup software included on the drive is for PCs only, but the drive will work with Time Machine on your Mac just like any other USB drive. However, WD does remember to include a Mac version of its 256-bit encryption software that you can use to protect your files, as well as a diagnostic utility that can monitor the health of the drive and adjust settings such as the sleep timer.

And, most importantly, the My Passport Slim performs well too. With a 5GB batch of small MP3 files, the drive achieved read and write speeds of 122MB/s and 108.7MB/s respectively, while the larger files used by AJA System Test produced a consistent speed of 115MB/s for both read and write. You can get higher performance from a solid-state drive, but those scores make the My Passport Slim one of the fastest conventional hard drives that we’ve seen recently. And, of course, it’s cheaper and provides a lot more storage than a solid-state drive.

And while a slimline drive like this is obviously designed primarily for use with laptops, its 1TB storage capacity will probably be enough to use with many desktop Macs too. That makes it a good choice for anyone that simply wants an affordable backup drive for their Mac, while WD’s three-year warranty helps to provide extra peace of mind too.