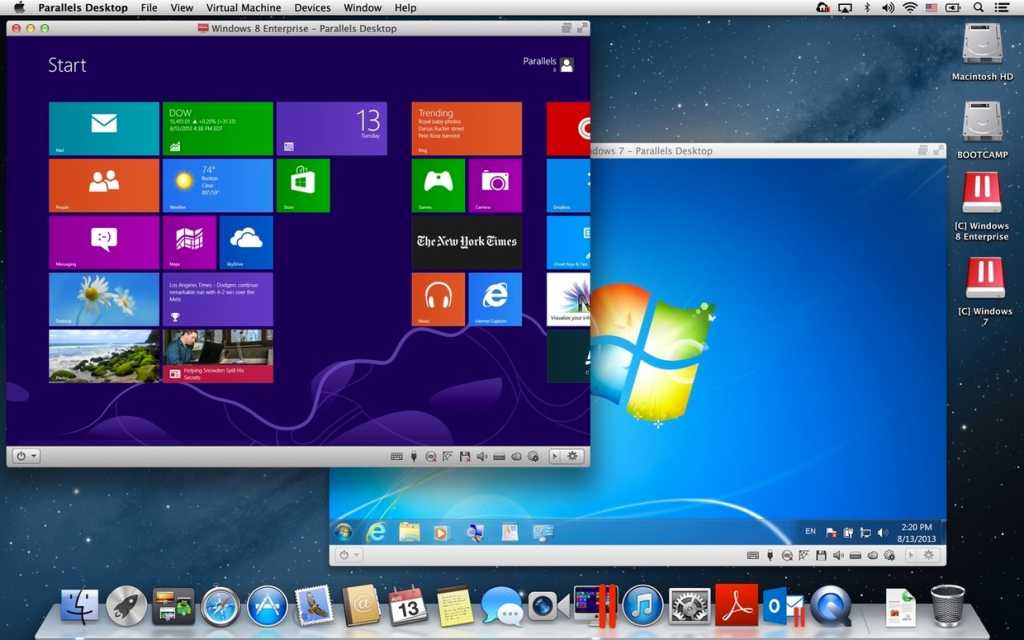 Parallels has added some useful new features to its Desktop 9 application, keeping it the highest-performance virtualisation package for OS X. Its support for OS X guests is embarrassingly poor but Windows and Linux both work very well, and with terrific graphics that make these VMs feel like native installs in full-screen mode. The app also deserves some praise for making Windows 8 usable out of the box.

One of the great things about using a Mac is its versatility in running all manner of software. As well as the best user OS in the business in OS X, a Mac can also run UNIX, Windows and Linux programs, the latter two quite effectively through virtualising an entire OS in a virtual machine (VM).

Three programs exist to do the job – Oracle’s Virtual Box, VMware’s Fusion and Parallels Desktop for Mac. The first option is powerful, and free to use, but not always the easiest to work with since it’s designed for experienced users prepared to learn its hidden foibles. By paying for one of the two commercial applications you may find it simpler to get up and running.

Parallels Desktop 9 for Mac is this year’s update to perhaps the most popular virtualisation program for OS X. Parallels is the slickest of all three, and is trying the hardest to cram in every possible features it thinks you’d want, along with several we wish it wouldn’t. In previous versions it’s been the fastest in operation, and at £65 is also the most expensive to buy; as well as to re-buy again whenever you’re tempted to pay the upgrade tax. So what does this year’s new version bring?

New features for Parallels 9 can be divided into two types. There are those added to complement or enable features found on the new host OS, namely OS X 10.9 Mavericks, plus the latest patch of Windows 8.1 as guest. And then there are the features Parallels has devised itself to swell the application’s scope.

Windows on a Mac

Word on a Mac 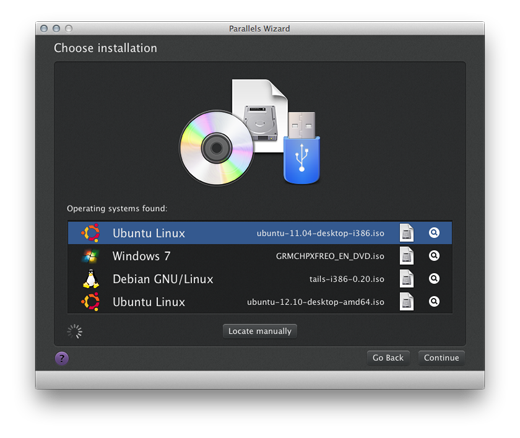 Installing an operating system from an image has been improved in Parallels 9, even if the list order is somewhat random

From the first list, Apple’s PowerNap now extends to Windows. PowerNap is a spin-off from Intel’s low-power mode that allows PCs with recent Core processors to entertain certain tasks when the computer is asleep; in the case of applicable recent Mac models this could include Time Machine backups, downloading software updates and checking for email.

Personally we find the idea of our computer periodically waking up and doing work unbidden a little creepy. And now you can extend the idea to let Windows apps do the same; an even scarier thought actually.

USB 2.0 has been supported from the beginning. More recently USB 3.0 has been included for manual activation with some success, depending on device. Now Parallels has added support for FireWire and Thunderbolt. In practice we found both worked as advertised with storage drives at least, if with a performance hit compared to native Mac connections.

With every revision to virtualisation software like Parallels there’s usually a promised increase in performance. The biggest delta advertised by Parallels is in disk performance, said to be 40 percent better than Parallels 8.

A useful synthetic benchmark to check processor and memory speed is the cross-platform Geekbench 3, although our Windows 7 guest machine was unable to run it in Parallels 9.0.23062. (More recently the 9.0.23350 update has now fixed this issue, albeit with results slower than Parallels 8.)

We ran a battery of other tests using the same VM of Windows 7 Ultimate 64-bit, and found a gentle lift in most areas.

Furturemark’s PCMark 7 is a Windows system performance test, which recorded 4412 points in Parallels 9, against 4363 for Parallels 8. That may look commendably better although it’s little more than a 1 percent increase in point score. Compare the results with arch-rival VMware Fusion and we see a wider gap, in Parallels favour. Fusion 5 and 6 scored 3963 and 4116 points here respectively, so that’s a 7 percent lead when comparing latest versions of these VM apps.

In essential system speed, it must be said that either of the main virtualisation packages today offer ample speed, close to a native install. 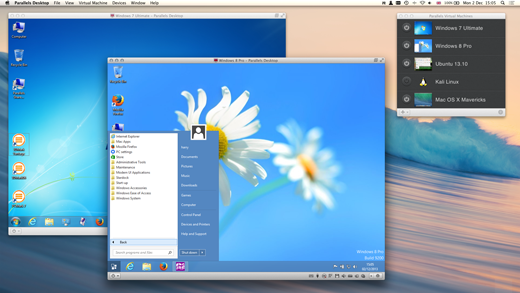 Time to max out your Mac’s RAM: subject to system resources you can run multiple virtual operating systems at the same time within Parallels

Graphics capabilities and performance have long been Parallels forté and version 9 proved no exception. Last year’s Parallels 8 update introduced experimental support for Microsoft DirectX 10.0, although we noted very patchy performance in parts of the PCMark 7 benchmark that employ this version of Microsoft’s graphics API. Parallels 9 fixes the flakey rendering and plays DX10 graphics cleanly, if slowly.

The Stalker: Call of Pripyat benchmark averaged 38 fps in DX10 mode (against 37 fps in Parallels 8). VMware’s Fusion package cannot use DX10 at all, and by defaulting back to DirectX 9, Fusion 6 actually played much faster, to 61 fps, if with poorer visual quality.

We also tried the Unigine Heaven benchmark with both apps, using again DirectX 9 mode. Average scores were about equal between Parallels 9 and Fusion 6 but with dreadful rendering in the latter that lost much quality. Scores here were 27.7 fps for Parallels 9 against 26.7 fps for Fusion 6.

Besides offering official support of Windows 8 and 8.1, Parallels goes further by making Microsoft’s unloved operating system marginally more usable. Even before the sticking plaster of v8.1, Parallels had included an option to let Windows boot directly into the regular desktop, rather than the original default of huge Metro tiles. And with the help of Stardock’s Start8 utility included with Parallels 9, the much-missed Windows Start menu returns too. If you do find Metro apps useful, you can also use them windowed within the classic desktop, to save you having to move to and fro inside the schizophrenic operating system.

Another new feature available to Windows VMs is the automatic mounting of your iCloud folder as a network sharepoint, without even being asked about it. Since we never gave Parallels our Apple ID password, it’s a mystery how it gained access to our private files and folders and made them available to Windows. The same facility is offered for anyone with a Google Drive or Dropbox account.

Installing VMs from disk images has become easier in Parallels 9, with the app automatically finding potential guest .iso and .dmg files on your local drives. You can also install from a connected USB thumbdrive now too.

Parallels Desktop 9 for Mac officially supports various flavours of Linux as well as some UNIX systems like Solaris and FreeBSD, plus the last three standard versions of OS X, from 10.7 Lion. Running 10.5 Leopard and 10.6 Snow Leopard is also possible but only in Server guise to comply with Apple’s licence terms.

Parallels provides a relatively painless way to run Linux, with a graphical script to install the essential tools for better performance and integration with the host Mac. It’s not terribly up to date though – for the key distro of Ubuntu, for example, guest support is officially extended only as recent as 12.04 Precise Pangolin from 18 months ago, despite two major releases since then which are not acknowledged by Parallels. In our experience though, even the latest 13.10 Saucy Salamander seemed to work perfectly well.

The same cannot be said of OS X guest support, which is becoming patchier with every new version of Apple’s OS. Drag-and-drop is still missing, although cut-and-paste of basic text works, if not files and folders.

Most troubling though is the continued absence of graphics integration. In contrast to Windows and Linux VMs which have rich, smooth graphics and butter-smooth screen animations, OS X guests have no graphics acceleration, leaving every on-screen movement rather juddery. This is becoming increasingly problematic as Apple offloads more of its on-screen rendering to the graphics sub-system. Mavericks relies on this much more now for headline new apps in OS X, namely iBooks and Maps, which simply don’t work within a Parallels VM. Nor does video content in iTunes. QuickTime Player X may just run but video output is unwatchable.

Similar problems exist with Adobe Flash – if you can download it at all through Safari, as we found a background WebKit process would continually crash. Shared Folders, which enables easy file sharing between host and guest, is also broken with OS X Mavericks guests.

Parallels told us that Windows and Linux have higher priorities and that it wasn’t prepared to invest in the work itself to make graphics work nor provide other integration features for OS X VMs, since it believes there are not enough people currently using it. Given the state of OS X guest support, we’re not surprised that so few people persevere. Which is a shame since sandboxed OS X guests would have many uses for developers, security consultants and everyday users who would enjoy the benefit of a sandboxed Mac environment.

When Parallels 9 first launched, upgraders found that the company had secretly shoehorned in its separate new Parallels Access application into the install process. Many users justifiably complained about this limited demo installing without permission, particularly as it was a remote-access program designed to open ports in OS X to allow a remote computer to take control of your Mac. Parallels quickly responded to the groundswell of complaints and a subsequent update removed this contentious automatic sideload.

Some liberties remain though. Without asking, Parallels will collect information about your computer and its software (both host machine and its VMs), and periodically send this data back to the company ‘to improve Parallels products and services’. It can be switched off in the app’s Preferences, when you dig down to an Advanced option, but we feel customers should choose this at setup, not be opted-in by default.

Parallels also tries to gain access to your Address Book for unspecified reasons. We can see no benign reason why it needs this. At least recent versions of OS X alert you when rogue applications try to compromise your privacy in this way, and allow you to block them.

Other annoyances include every new Windows VM being configured in Coherence mode unless you deselect ‘Express installation’ mode; and a bug that means Parallels continually creates an ‘Applications (Parallels)’ directory in the ~/ user directory, even when ‘Share Windows applications’ is deselected from the VM configuration.