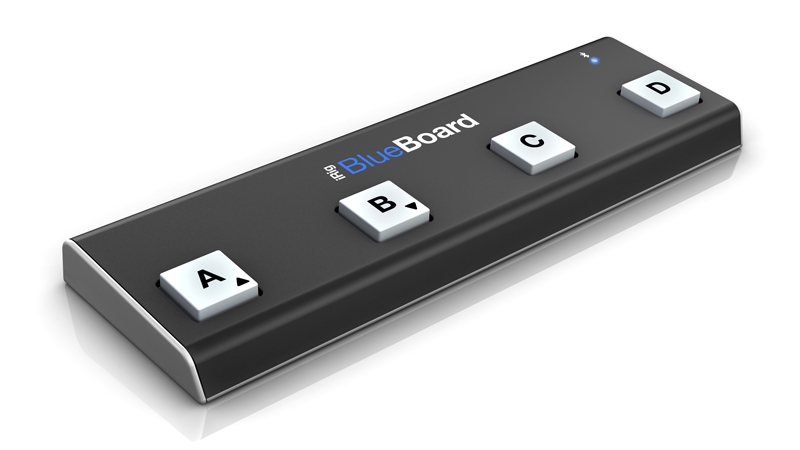 The iRig BlueBoard is a fascinating first attempt at making iOS devices a legitimate option for live music. It’s hit and miss in this regard due mainly to the plastic construction that we feel would not cope with the rigours of the road. For the more sedate player though, harking for a lightweight pedalboard, or anyone who wants to use their iPad for rehearsing or recording, the BlueBoard is a solid choice, especially if you’re a fan of Amplitube.

The past few years have seen a steady increase in the amount of apps for guitarists on iOS. It’s not surprising really, as there’s a long tradition of digital technology blending with the wood and valves of a gigging rig. Multi-effect units are central components of many working musician’s arsenal, and the power of an iPad or iPhone easily competes with that found in traditional offerings from Line 6 or Boss.

The major difference is that not even the most foolhardy player would lay a large, expensive slate of glass and silicon on a stage where energetic size nines are flying and occasional ales are spilled. Thankfully there may finally be a solution.

The iRig BlueBoard is a MIDI foot controller that connects to your iOS device via Bluetooth. It’s a compact unit that’s just slightly longer than an iPad and half as wide, adorned with four LED-backlit control pads. The principle is just as you would expect: link it to your iPad, launch your music app, then tap on the footswitches to change the settings. In reality though it’s a little more complicated.

The first thing to realise is that the BlueBoard is not an audio interface. To use it you’ll still need a separate unit to connect a guitar to your iOS device. These are plentiful nowadays, such as the iRig Pro that comes from the same stable as the BlueBoard, and the unit we’d choose here. You’ll also need to download the free BlueBoard app before you begin, as this allows you to pair the device to your iPad or iPhone. With all pieces in place you can start to experiment with the brave new world of foot-controlled iOS music.

Although its possible to use the BlueBoard with essentially any MIDI-controllable app, we had by far the best results when using various flavours of Amplitube. This is no coincidence, as the software is from the same company that makes the hardware, IK Multimedia.

The dedicated BlueBoard app does give you a considerable amount of control over the pad functions, so you could certainly make it work well with other apps, but you’d need to be prepared to spend some time manually setting it up.

The BlueBoard has two types of operation, between which you can toggle in the dedicated app. Program mode allows you to switch between presets patches in an app, while Control mode gives you access to individual elements within the patches. This means that once you’ve assigned the MIDI control to a certain effect pedal in the signal chain, you can turn it on or off by stomping on the pad, just like a traditional pedalboard.

It’s a little fiddly to set up, requiring you to tap and hold the pedal on the iPad until an option appears, then pressing one of the control pads to map it to the pedal, but it doesn’t take long. Beware though that if you decide to change the pedal model you’ll have to map the control pad again. The unit also has two additional 1/4in jack inputs which allow you to use a wah or volume pedal, so long as you calibrate it in the BlueBoard app.

Thanks to its plastic casing the BlueBoard is a lightweight portable unit, but the lack of real mechanical footswitches means it’s something you wouldn’t want to rely on in a live situation. With no tangible click, or visible light above the pedal, you can’t tell whether the button has engaged or not until you remove your foot. Yes, the sound will give it away, but if you’re preparing to launch into a solo it’s always reassuring to feel that snap under your shoes and see the red light come on before you throw yourself into the limelight.

For use in a home studio, allowing you to switch between sounds as you record, it could be a very useful addition indeed. The response times are fast and bright blue lights make the pads easy to see in a dimly lit room.