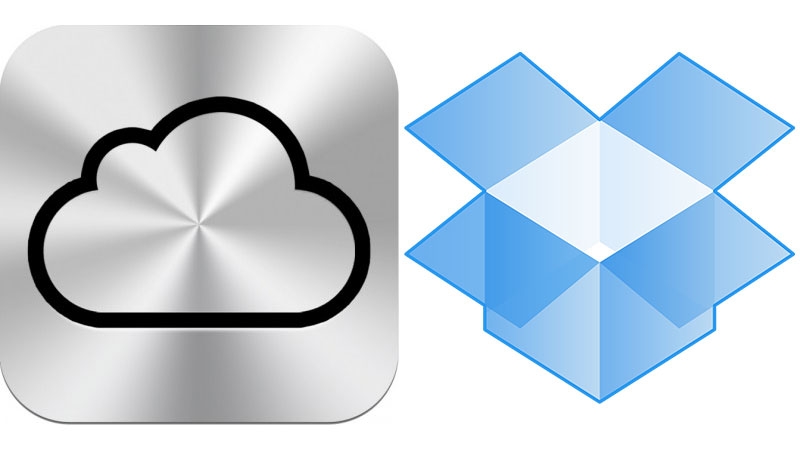 iCloud is a great service to have on your Mac and iPhone. But the only reason we’d pay for the additional service is to store multiple iOS device backups. When it comes to storing files online and sharing them with other people we suggest using a service like Dropbox over iCloud.

What’s the best cloud file sharing software? Is iCloud good enough, or is it worth paying for Dropbox? Find out, in our iCloud vs Dropbox comparison review.

In our iCloud vs Dropbox comparison review:

A decent cloud service is essential to any modern computer user. A good Mac OS X and iOS cloud service is a brilliant way to store all your files, documents and information on a remote server and access it anywhere.

As we increasingly use multiple computers: work, home desktop, home laptop alongside iPads and iPhones having all the information in one place becomes an essential part of computing.

Apple has an impressive service that integrates across Mac OS X and iOS called iCloud. iCloud enables you to sync all your information across multiple devices. You can sync your calendars, mail messages, contacts, reminders and a slew of other information. 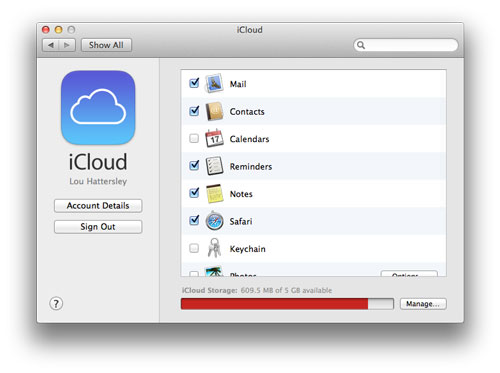 Recently Apple added Documents In The Cloud to the list of iCloud’s features. This integrates Apple’s apps: Keynote, Pages and Word with iCloud. It saves your files online instead of locally open a device, and any changes you make are adjusted online and all your devices are updated.

But iCloud isn’t the only cloud service available to Apple owners. There are a slew of other cloud services vying for your attention. The most popular service is Dropbox. Dropbox is a dependable cloud service that adds a folder to your Mac OS X computer, called the Dropbox, and anything you place in that folder appears on any other computer you have with Dropbox installed on it. And by installing the Dropbox app in iOS you can access your files on an iPad or iPhone.

Dropbox isn’t just for storing your own documents and files though: thanks to its enormous popularity many other apps and services use Dropbox to store data and app information. So it’s pretty handy service for Mac users to have around.

The good news is that both are free. You get iCloud when you sign up for an Apple ID and you get 5GB of space for free; Dropbox can be installed from the Dropbox website and you get 2GB free but can easily earn extra Dropbox space by setting up camera uploads and referrals.

See also: Set up iCloud and back up your iPhone and How to backup iPhone photos automatically: back up photos online without iTunes

iCloud is a catchall service that covers Apple’s entire suite of wireless synchronisation and backup services, with the aim of keeping all your devices, including iOS and desktop computers, on the same page. There are four main areas covered: document and data sync, mobile backup, location awareness, and purchase management. You set up iCloud in Settings on your iPhone or iPad, and in System Preferences on your Mac. You’ll need an Apple ID but if you haven’t got one by now you’re probably overdue one anyway.

Dropbox setup is slightly more fiddly, but not by much. You first sign up for a Dropbox account and install the Dropbox application. This places a new folder in Finder called Dropbox. As long as you’re connected to the Internet, you can use this like any other folder on your system; adding files, creating and deleting directories, saving documents and so on. The difference is that the folder’s online – stored on the Dropbox servers. The free version gives you 2GB of space to play with – which makes it ideal for office documents, but less useful for big media files. The $9.99 (about £6) a month option buys you 100GB of secure and guaranteed storage. 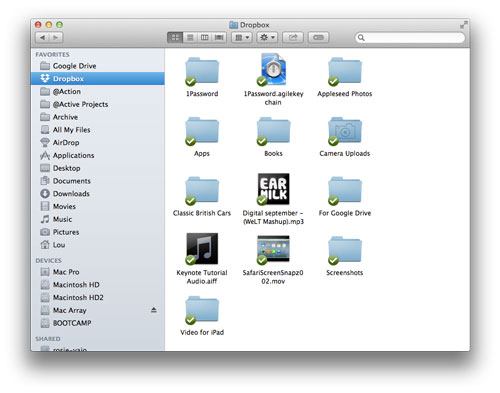 Both iCloud and Dropbox offer good integration with the iPhone for photos. Apple uses iCloud Photo Stream to transmit any photographs snapped with an iPhone to the Photo Stream where they can be access on other devices running the same ID. We find this particularly useful when snapping pictures on an iPhone and viewing them on an iPad.

But Dropbox has an ace up its sleeve in the form of Photo Uploads. Install the Dropbox iOS app and switch this on and any pictures snapped in your iPhone will be copied to your Dropbox. In many ways prefer this as we can then quickly view access the files and share them with other people. Another neat trick is that Dropbox can be set up to transfer any screen grabs you take to a specific folder, so you can install Dropbox on several computers and take screen grabs and have them all appear in the one place (a trick we use when creating our How To tutorials).

One thing worth considering is how secure your files are. Dropbox is very good at sharing files, but there have been persistent doubts thrown over its ability to keep them safe. Multiple stories regarding Dropbox security breaches have appeared over the last few years, and still continue to appear. In September 2013 it was revealed that the Dropbox looks at files uploaded to its service, although it has strict rules in place and only a small number of employees may look at files. Other services like Box.net tend to be favoured by indviiduals looking to maximise privacy.

iCloud is generally considered more secure than Dropbox. Apple uses a minimum of 128-bit AES encryption (used by banks) and as I write there is no practical way to crack this that I know of. Apple uses two-step verification for iCloud and unless you really are important nobody is going to get around two-step verification or 128-bit AES encryption on your behalf. We’d consider iCloud to be a more secure environment than Dropbox, and Box.net to be more secure than either. In this regards it depends on your desire for security verus you desire for frictionless sharing: Dropbox is undoubtedly better for sharing files. 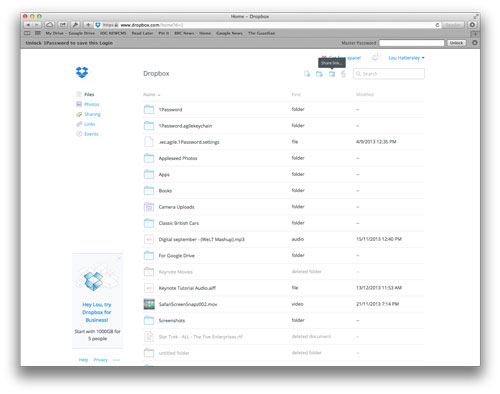 One of the neat things about Dropbox is the wide-ranging support from other apps. Dropbox itself offers a range of Developer SDK and App Support features, making it easy for devs to integrate Dropbox with their apps. Because of this you’ll often find iOS apps offer Dropbox support for storing files. Despite Apple offering similar support for Documents in the Cloud, Dropbox support is tremendously more widespread.

Dropbox has another killer feature in the form of native backup functionality. Files you delete from Dropbox remain backed up along with version control, so you can dive into the Dropbox web page and go through your history to undelete files. The Dropbox webpage itself is highly useful for downloading files. But above all dropbox is great for file sharing, enabling you to share files and folders with people. And users can get notifications when files have been updated, making the whole service pretty useful for working online together.

Another neat aspect to Dropbox (and a unique one as far as we can tell) is that it has LAN sync between different devices. So if your Mac and MacBook are both on the same network the files will sync locally much faster between the two devices. 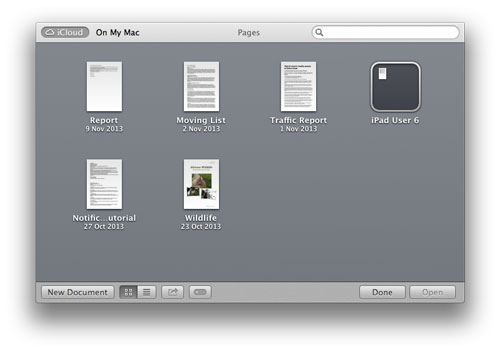 Should I get Dropbox or iCloud?

This is a bit of a tricky question as both Dropbox and iCloud offer a range of unique features. For its part iCloud enables you to backup your iOS devices, and makes it easy to sync data across your various iOS and Mac OS X apps.

Because iCloud offers 5GB for free and almost all of this will be taken up with iOS backups, you’re almost certainly better of getting the free iCloud and using that.

Where comparisons become more complex is document support. Both iCloud and Dropbox work differently with files. In iCloud the files are created by the app (say Pages) and then accessed from within Pages on other Macs or iOS devices. You don’t get to access the file in the Finder. While this is interesting we’re still finding it tricky to get used to Documents In The Cloud, and Dropbox’s Finder integration makes more immediate sense to us. 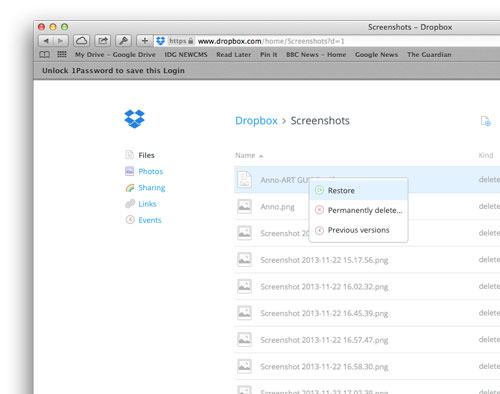 But the clincher is when it comes to file sharing and backups/version control. Dropbox simply nails both of these. It’s easy to share a file or folder in Dropbox and you can why it’s so popular. And the notifications are great when you’re working collaboratively. Plus, because Dropbox is so widespread you don’t need to go through the “have you got…” conversation with people. Most people already have, and know how to use, Dropbox. This alone should make it your first port of call for sharing files online.

The ability to go through your old deleted files and recover them is something that we’ve used with Dropbox frequently. When Apple rolls Time Machine into iCloud then we can talk, but for now our files would be stored on Dropbox.