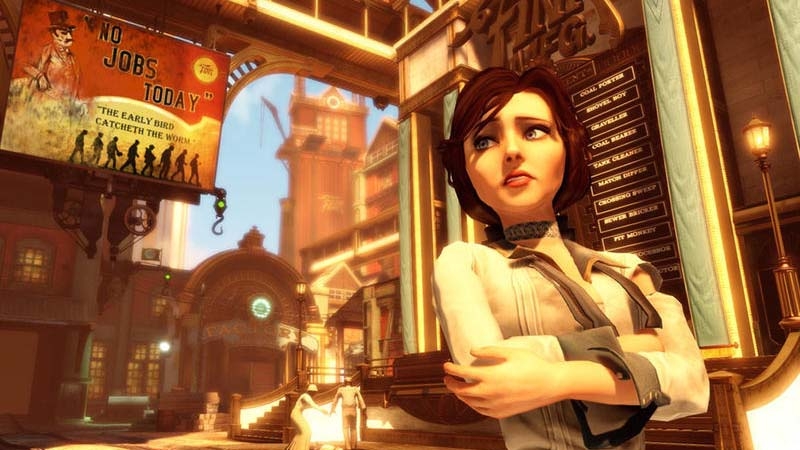 BioShock Infinite is an incredibly ambitious game both visually and thematically. The developers took the series in a bold new direction by moving away from the signature Rapture setting and find success. Any shooter fan will not want to miss this excellent title that satisfies both your trigger finger and your brain.

The title “BioShock” conjures up images of Rapture, the underwater city wherein the first two games take place. You even start the game on a stormy sea, reminiscent of the first BioShock. However instead of going to the deep depths, you go up, up, up in the sky to the lost city of Columbia.

Neither a prequel nor sequel to the other games in the series, BioShock Infinite takes place in 1912 as you assume the role of Booker Dewitt, an ex-Pinkerton agent sent up in the clouds to clear a mysterious debt by finding “the girl” and bringing her back.

BioShock Infinite takes its time setting the stage before any real violence occurs. You are free to wander around the streets and shops of the city, taking in the sights and sounds of this amazing place. Its awe-inspiring in some ways, and the people seem friendly and happy. But you can tell there’s something wrong, an undercurrent of menace lurking behind the cheer.

There are warning signs to beware of “the false prophet” and how “the lamb of Columbia” must be protected. What this means and how you fit into the story are just one of many intriguing aspects to the game. 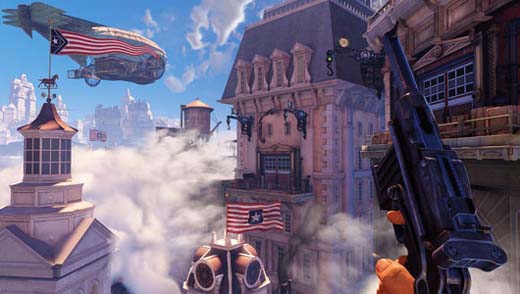 Even early on you view a lot of religious fanaticism and hints of slavery and racism. Heavy themes for a game no doubt, but BioShock has always been about interesting and challenging ideas. On top of all this is the political strife in which Booker gets caught up as he finds and attempts to escape Elizabeth.

Rapture had a sense of claustrophobia at times, being at the bottom of the ocean. But Columbia is all about expansiveness and makes use of its open and cloudy setting. A “sky rail” system lets you hook onto rails and zip around many levels at thrilling speeds. There’s a new sense of verticality to a lot of the combat and making use of your environment. It’s definitely a bit more frantic than previous BioShock games, and this is a good thing.

Combat has some minor changes and additions compared to the original BioShock and BioShock 2 games. You may only carry two guns at anytime, but you can change your gear – similar to tonics – as you please without needing stations. Additionally you have access to all your Vigors (Plasmids) with a convenient wheel menu.

The heady mix of religious and political fervor dominate the story, much of it revolving around the supernaturally talented Elizabeth. She is a captivating character who is at turns charming, innocent and frightening – animated and expressive in a way no non-player character has been before her. She is never directly involved in combat, but can support you by finding or tossing you supplies.

Infinite isn’t afraid to tackle big themes for a shooter, or any game for that matter. It aims high and often hits its mark. A few misses along the way are hardly noticeable as the narrative payoff is incredible while the game juggles racism, religion, sexism and corrupt societies.

Performance wise the game ran great on our mid-2010 iMac. Graphics and audio are both a treat here and you will enjoy the top-notch voice acting and dazzling visuals on display. It is worth it to take your time to explore Columbia and admire the views.