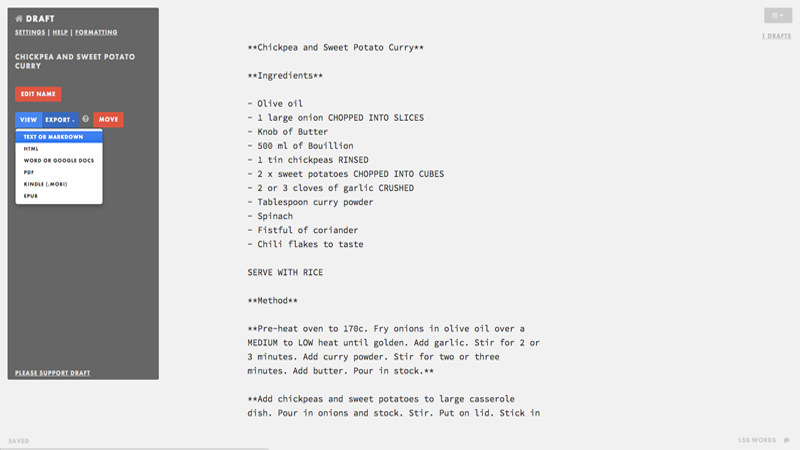 Draft is currently free to use as the developer, Nathan Kontny, improves and adds features. It’s the work of just one guy. You’re encouraged to subscribe to keep the project going – and we think it’s worth it.

Draft is a new online writing and editing tool that you access through your web browser.

Google Documents is the best known online word processor and it’s a tool we use daily. But although GDocs is full of useful features, it’s in danger of getting bloated.

Draft’s reduced set of features has been chosen to help you focus on writing – and we think it does the job beautifully.

You can do all the basic things you might expect from an online text editing tool, like create and edit documents, format them, share them with others for editing, add comments and export the results.

The writing view is clean and clear, free almost entirely of menus and other distractions. Instead, most formatting has been reduced down to a dozen easy to remember keyboard shortcuts. They follow standard word processor conventions so shouldn’t take anyone long to learn.

The document view uses a large, typewriter style font with a light grey background designed to minimise eyestrain. If you’re not too fond of this you can change both the typeface and the background colour in Draft’s settings.

There are a few features that better the competition too. There’s an onscreen word count, for example – a basic function that’s missing from Google Docs. Analytics tools help you to set writing goals and measure your progress.

The biggest attraction is built-in support for markdown, a method for formatting written documents that has become popular among programmers, technical authors and bloggers due to its support in content management systems. It enables you to format text on the fly using simple, inline notation. Google Docs doesn’t have it.

You can write documents using markdown, formatting as you go or you can continue to use the app’s built in shortcuts and then save to markdown. A word about import and export too. As an online service, Draft integrates with lots of other services. Though you won’t find support for iCloud, you can import text documents from Dropbox, Google Drive, Evernote and directly from a URL. You can also export to several text formats, including RTF, PDF, Kindle (.mobi) and MS Word.

Sharing documents is highly controlled. You can send a URL to any other Draft user, who can then add comments to and edit your work – but you have to sign off on the changes before they stick.

There’s one final feature to mention. Draft gives you much greater control over versioning of your documents than GDocs. While Google Docs saves frequent revisions (every autosave), Draft lets you save drafts as you go along. These can be used as version milestones for comment or correction – and they’re a reliable way to do so as, unlike Google Documents, they persist however many changes you make.