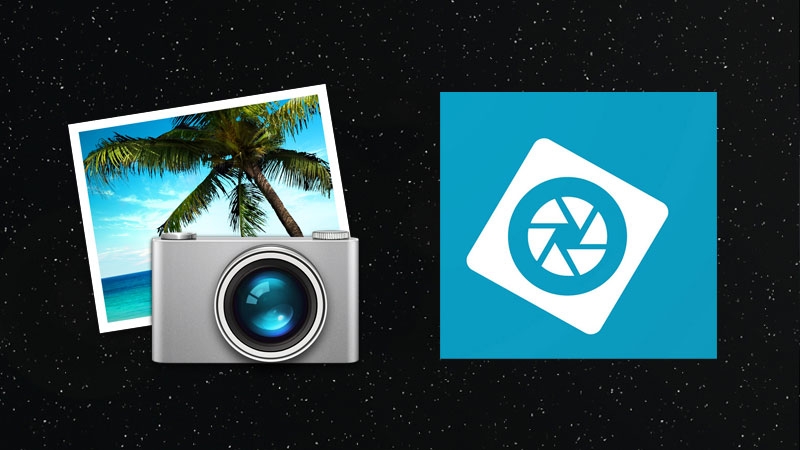 Apple has always said that iPhoto is primarily intended as a tool for organizing your photo collection, and on that score it really is hard to beat. Its automatic sorting options and uncluttered interface allow even complete beginners to organize their photos really quickly. In contrast, Adobe’s Organizer has lots of useful features but isn’t nearly as easy to use. However, iPhoto simply can’t compete with the more powerful editing and creative tools found in Photoshop Elements. If you just want to brighten up some photos that have poor lighting or colours then iPhoto will probably do the job. But if you want to go beyond that and create new images and effects with your photos then the wide range of editing tools and creative effects crammed into Photoshop Elements will be just what you need.

The great strength of iPhoto is the speed and ease with which it can help you to organize even really large collections of photos. Whenever you import a new batch of photos, iPhoto automatically organizes them into ‘Events’ that contain photos that were taken on the same date and time, such as a birthday party or wedding.

If your phone has a GPS feature then iPhoto can display a ‘Places’ map that shows the locations where you took your photos, and it can even use face-recognition technology to locate photos containing faces that it recognizes. When it’s done all that, iPhoto presents the Events, Faces and Places options in a simple list on the left-hand side of the screen, along with a few other options such as the ‘photo stream’ of photos from your iPhone or iPad. It’s all very straightforward and allows even complete beginners to get started very quickly.

Things are a little more complicated with Photoshop Elements. If you buy the full version of Photoshop Elements from Adobe (£78.00) you’ll find that it includes a separate Organizer program that has many of the same features as iPhoto. It can use events, faces and places to organize your photos, and it goes even further by helping you to organize audio, video and PDF files too.

The Organizer is a little more complicated than iPhoto, though, and has a rather cluttered interface that can seem confusing for new users. However, with Photoshop Elements 13, Adobe has introduced a new feature called eLive that is designed to provide extra help for new users. By default, the Organizer now opens with the eLive page on display, and this provides links to a number of tutorial videos on YouTube, along with information and tips for many of the key features in Photoshop Elements. You can browse through the eLive information if you want to, or go straight into the main Organizer by clicking on the tabs for People, Places and Events that are located at the top of the screen. The eLive content is also available within Photoshop Elements itself, so that you have extra help available whenever you need it.

There’s one other option available here too, as it is also possible to buy Photoshop Elements on its own – without the Organizer – from the Mac App Store for the lower price of £54.99. You can then set up Photoshop Elements so that you can carry on using iPhoto to organise your photos, and then just switch into Photoshop Elements when you want to do some more serious editing. The only disadvantage here is that the App Store is still selling Photoshop Elements 12. Fortunately, version 13 isn’t a major upgrade, so you’re not missing out on too many important new features if you go for this less expensive option. 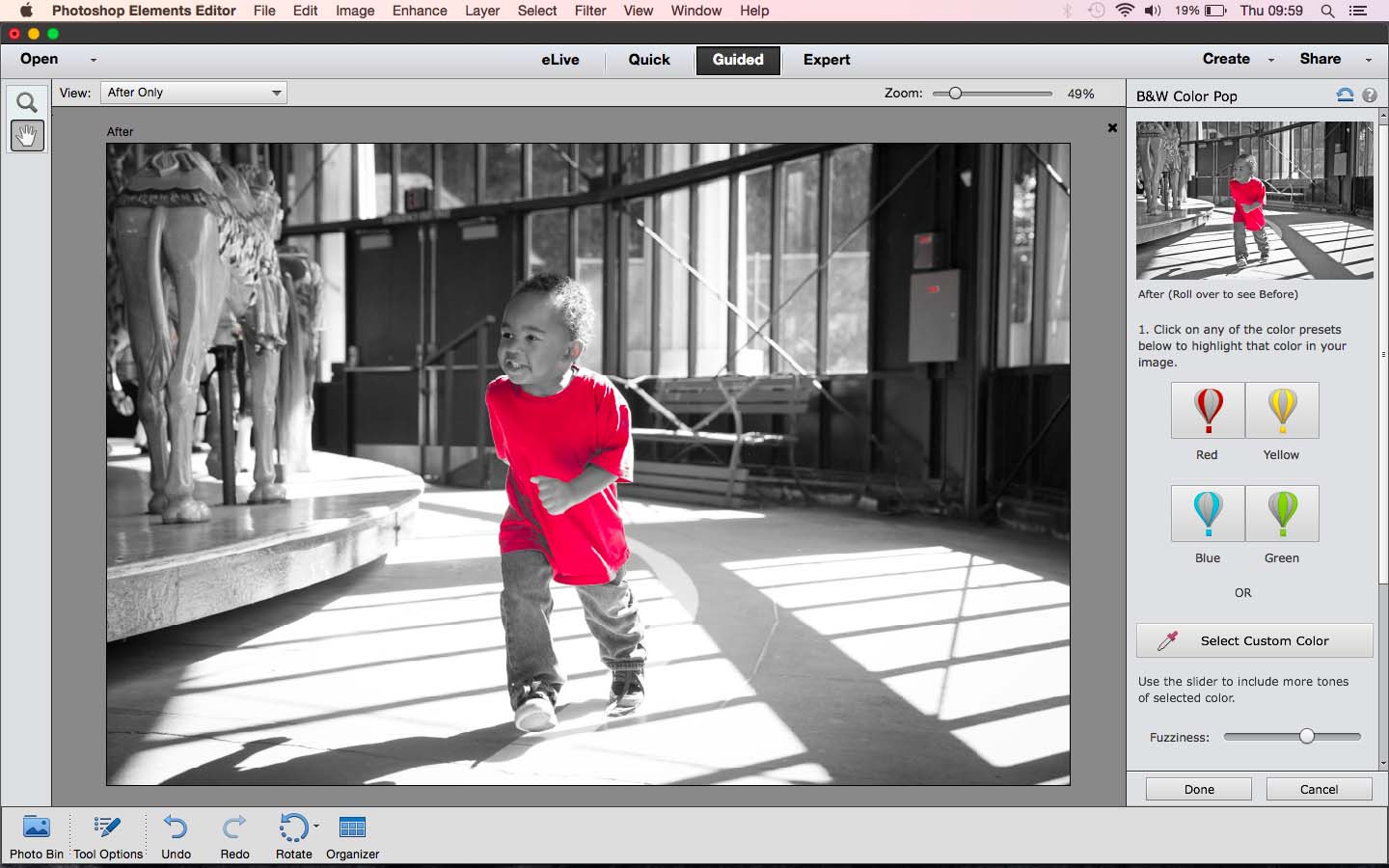 The editing tools in iPhoto are quick and easy to use, but they tend to focus on fairly basic tasks, such as adjusting colour, brightness and exposure, or fixing common flaws such as the dreaded red-eye. There are a handful more advanced tools, such as the Levels histogram that allows you to adjust highlights and shadows within an image, but this is so complicated that it will probably baffle most amateur photographers.

Photoshop Elements provides all those features and more, and it also does a really good job of catering for different levels of experience and technical knowledge. There are actually three editing modes in Photoshop Elements, starting with ‘Quick’ mode, which provides a simple set of tools for adjusting colour, brightness and exposure, along with red-eye removal and a tooth-whitening brush to make those smiles look even brighter. Photoshop Elements 13 provides some extra help here too, as its Crop tool now shows previews of four different cropping options that you can apply automatically with a single click of your mouse. The Selection tool has also been improved, with a ‘nudge’ option that allows you to delicately adjust the edges of a selected area for greater precision.

Once you’ve got the hang of these basic tools you can explore ‘Guided’ mode. This is a great option for people who want to know more about photography, as it provides step-by-step help for common editing tasks, such as touching up portraits, restoring old or damaged photos, or experimenting with depth-of-field and other photographic techniques. Version 13 of Photoshop Elements includes three new Guided Edits that all focus on black-and-white photography. There’s a basic Black And White effect that allows you to experiment with different lighting and contrast effects, as well as a more precise B&W Selection tool that lets you ‘paint’ the black-and-white effect onto specific areas. However, the option that will probably be used the most is B&W Colour Pop, which leaves one area – such as a face or clothing – standing out in colour, while the rest of the image is turned to black-and-white.

More advanced users can step straight into ‘Expert’ mode, which includes many advanced editing tools that Adobe has taken straight out of the full professional version of Photoshop. You can use its powerful selection tools to isolate specific objects or colours within a photo, or use layers to create composite images that combine elements from multiple photos. There’s also an option called PhotoMerge that is specifically designed to help you combine elements from a number of similar shots in order to create a final ‘perfect’ image. Photoshop Elements 13 further refines the PhotoMerge tools by allowing you to quickly resize elements taken from one photo so that they fit more effectively into the new photo. You can even hide parts of your selection – perhaps to make one person look as though they are standing behind someone else – and also match the lighting and colour settings so that the new elements you insert into your photo blend more effectively with the main image. 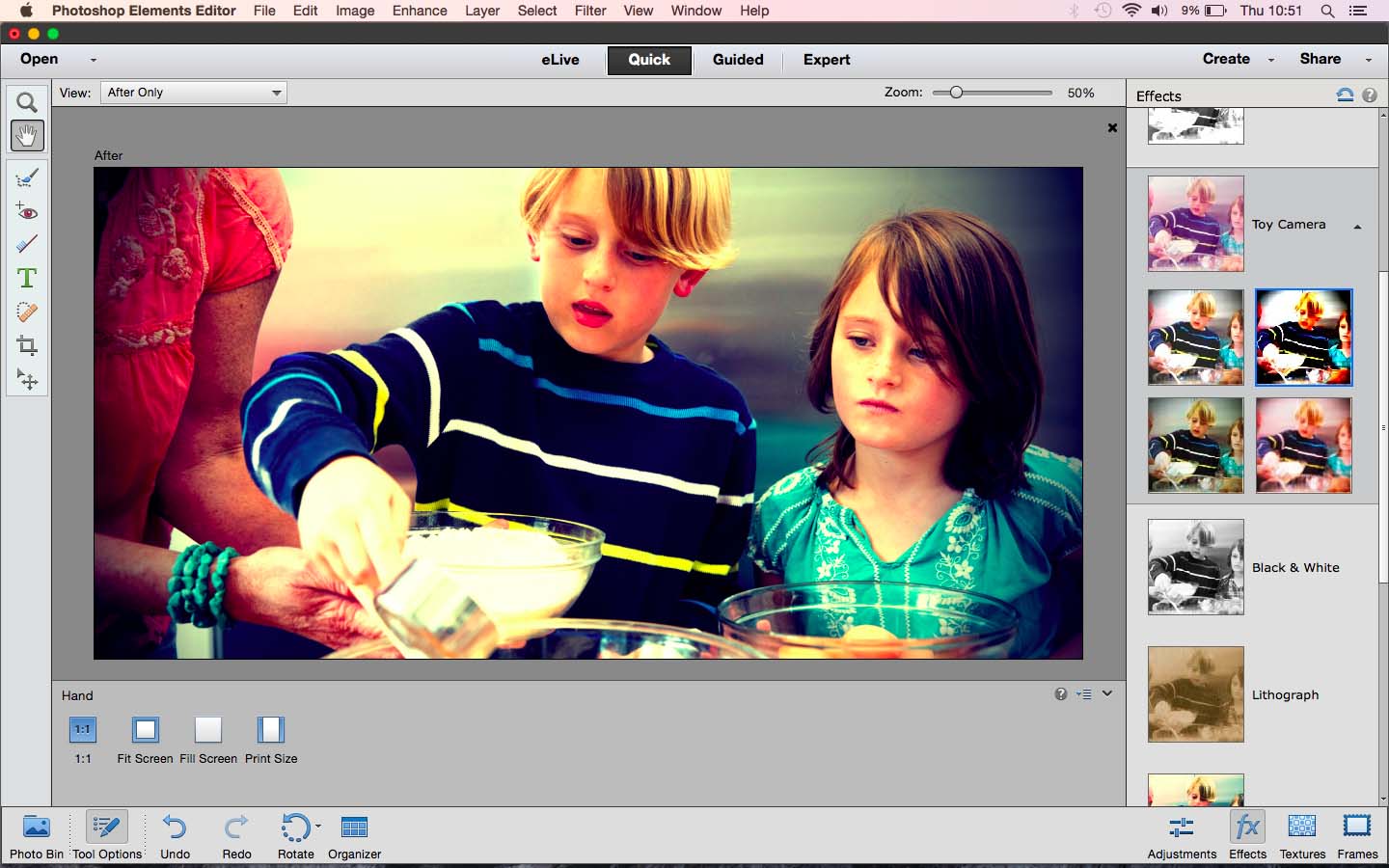 As well as editing tools that help you to improve the appearance of your photos, both programs also include a number of effects that can be used for more creative work. Again, though, it’s Photoshop Elements that wins hands-down here.

The effects on offer in iPhoto are very limited, mostly consisting of old favourites such as black-and-white or sepia and vignette effects. Photoshop Elements, on the other hand, includes dozens of different effects that you can experiment with. Some of these reproduce common photographic effects such as blurring or sharpening an image, and there are options within the program’s Guided mode that can help to introduce and explain photographic techniques such as the Orton or Lomo effects. Photoshop Elements 13 doesn’t include any major new photographic effects, but it adds a new set of five previews for each effect that show how different settings can change the appearance of your photos. You can then quickly apply the required settings simply by clicking on the preview thumbnail.

Other effects allow you to distort an image in various ways, perhaps increasing the size of a person’s head to create a cartoon or caricature. There’s also a wide range of artistic effects that can make your photos look like a hand-drawn pencil sketch, water-colour painting, or even comic book artwork. Photoshop Elements also provides a special editing mode for these effects, called the Filter Gallery, which allows you to modify the settings for things like brush strokes and the degree of distortion, so it’s easy to experiment and achieve the effect that you’re looking for. 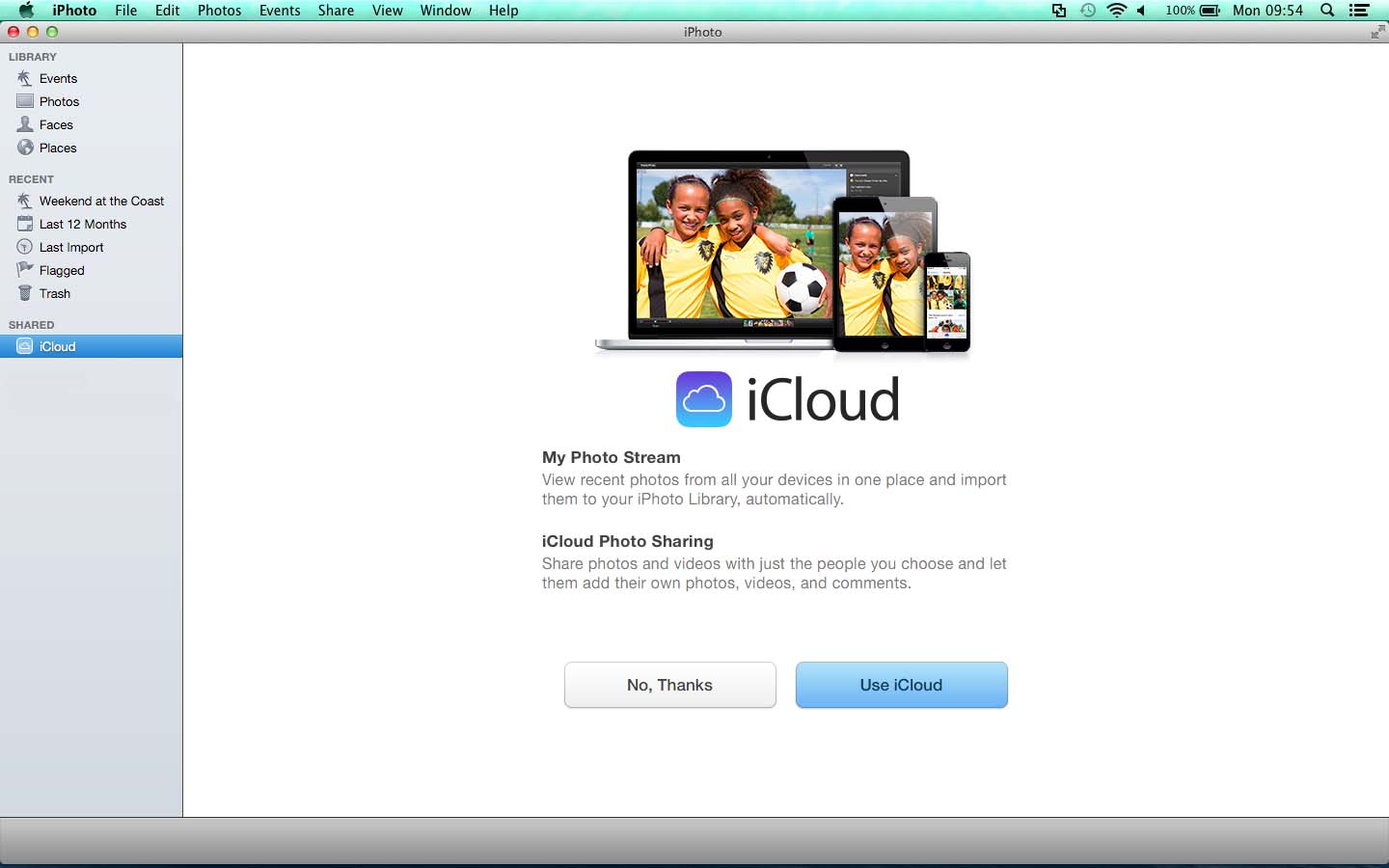 Once you’ve put the finishing touches to your photos you’ll obviously want to share them with your friends. Photoshop Elements and iPhoto are pretty closely matched here, as both programs include options for designing and printing cards, calendars and photo-albums, as well as uploading photos to social sites such as Facebook and Twitter. However, the latest version of Photoshop Elements does have one nice new feature for use with Facebook. If you select Cover Photo from the program’s Create menu you can create a customized cover photo for your FaceBook profile page. You can either select a single photo and then resize and position it so that your face is highlighted, or import multiple photos to create a collage effect.

You probably already know that iPhoto on the Mac has an option called Photo Stream that automatically displays photos taken on iOS devices that you own, such as an iPhone or iPad. However, the latest version of iPhoto also allows you to create shared photo streams so that you can invite other people to view your photos too.

Adobe hasn’t been left behind here, though, as it recently launched a service called Revel that works in a very similar fashion to iCloud. You can use Revel to share photos across multiple devices that you own, or to create online galleries that your friends can view.

However, you might have to pay to use Revel. You can upload as many photos into your Revel account as you want in the first month, and then 50 photos a month after that. If you want to upload more than 50 photos a month then you’ll need to pay a subscription fee of £3.99 a month. Most Mac users will obviously prefer to stick with iCloud as it’s free and works automatically with Macs and iOS devices. Revel does have one advantage over iCloud, though, as there’s a Revel app for Android devices, which means that you can share photos with non-Apple devices too.