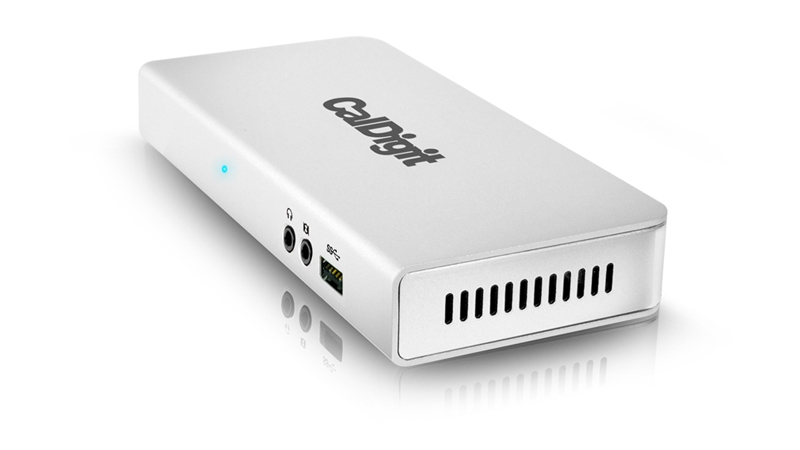 The CalDigit Thunderbolt station is a very useful addition for anyone with a Thunderbolt Mac that needs up to three USB 3.0 ports, or a quick way to connect all their peripherals quickly. Improved audio quality and consistent HDMI operation would make this product really stand out from the crowd.

The CalDigit Thunderbolt station is a Thunderbolt hub encased in stylish aluminium that looks right at home next to a MacBook Pro, iMac or Mac mini. It will give you access to many extra connections after attaching to your computer’s existing Thunderbolt port.

It is a solidly built metal box, and quite compact at 174 x 80 x 26 mm compared to the wider and deeper Belkin Thunderbolt Express Dock. On the back of the CalDigit dock is gigabit ethernet, HDMI, two Thunderbolt ports, two USB 3.0, a DC power inlet.

The front has a 3.5mm headphone socket, a 3.5mm audio input and one more USB 3.0 port. A tiny LED glows blue when the unit is powered and connected to a computer. The ends of the unit have grills for ventilation, and our unit did still get quite warm in use.

The CalDigit Thunderbolt station comes with a laptop-style 60 watt power brick which can be tucked away under a desk. We found that the CalDigit hub could power all USB and Thunderbolt portable devices tried, including four portable hard drives. Our colleague did however have a problem with a portable drive which would not power on with the CalDigit station, and there’s not enough current to charge an Apple iPad.

Connections to the rear of the CalDigit Thunderbolt Station

Thanks to its small size and modest 375g weight the dock is quite portable. The CalDigit does not come with any Thunderbolt cable, so you will need to buy one of these seperately.

Setting up the CalDigit Thunderbolt station is a breeze. Rubber feet underneath help keep the unit firmly in place and prevent desk scratches. Once you connect it to the power supply, and plug a Thunderbolt cable between it and your computer, you’re ready to go.

Drivers are not needed to use the unit with Apple Macs. For Windows 7/8 you will need to install various drivers to use USB 3.0 as well as the ethernet port, all available from the CalDigit website.

We used the CalDigit Thunderbolt station with a 27in iMac (Mid-2011) as well as a MacBook Air (Mid-2012). Both these machines can benefit from the CalDigit station, thanks to some very useful port options.

Our 2011 iMac does not support USB 3.0, nor does it have an HDMI port. The second may not be so crucial as any Thunderbolt port will double as Mini DisplayPort output, which can be turned into HDMI with a simple adaptor. But the addition of three USB 3.0 ports that should also support UASP (USB attached SCSI Protocol) is a real plus. This will be a benefit to anyone with modern USB 3.0 hard disks and flash drives that operate at higher speed.

We tested the speed of the USB 3.0 ports and found that they were as fast as the portable drive itself – a portable Integral Memory SSD maintained its maximum read speed of 296 MB/s.

Unfortunately this flash drive is not UASP-compatible so we can’t be sure of the CalDigit Thunderbolt Station’s full potential. But to many users a speed of around 300 MB/s should be adequate.

Meanwhile, our Macbook Air lacks wired ethernet, analogue audio input and HDMI. And Air models prior to the 2012 refresh had only USB 2.0. By attaching the CalDigit Thunderbolt Station you will gain all these ports. This could be especially useful in an office setting – you leave the CalDigit at the office, connected to the ethernet network, an external screen, keyboard and mouse, headphones, and external storage. When you arrive, just plug in one Thunderbolt cable to your Macbook Air and you’re ready to use all these devices.

In our test we found that it was best to plug the Thunderbolt cable only after opening the laptop’s screen and were logged-in, otherwise any external drives attached to the CalDigit were not automatically recognised.

We tested the ethernet performance and found it usually operated at near-maximum gigabit ethernet speed with incoming data (circa-110 MB/s) although it seemed to be operating at around half-speed with outgoing packets.

The HDMI connection proved rather erratic. It’s specified to HDMI 1.4 standard, which means it should be able to output video at 3840 pixels across at 30Hz. We tried it with a Dell UP2414Q monitor, a 4K display with 3840 x 2160 pixel resolution. Out of four Macs we tried, only two would actually work at correct native resolution – both 15-inch MacBook Pro notebooks of different generations – while a new 2013 Mac Pro and our MacBook Air refused to work with anything greater than only full-HD resolution.

Audio quality from the headphone port on the CalDigit is not good. You need to make sure you insert your headphone plug firmly, or you’ll hear signal from only one channel. Then we found that even when working correctly the sound was worse than that available directly from our Macbook Air. Music sounded very coarse and ‘digital’ and we wouldn’t recommend it for any comfortable listening.

More worrying was the presence of intermittent noises when any connected drive (SSD or hard disk) was being accessed. It would spell disaster if you were to use the input to record audio with all that nasty noise.

Two Thunderbolt ports makes the unit more flexible. It can be daisy chained at the beginning, middle or end of the line when connecting with other Thunderbolt devices.

In our tests this worked fine most of the time, although there was one case when an external G-Technology G-DRIVEev drive was not recognised when it was plugged into the CalDigit. Restarting the drive did not help.

To fix the problem, we had to use the CalDigit Thunderbolt Station at the end of the daisy chain. Fortunately this particular drive has two Thunderbolt ports. Strangely, it worked fine in any combination with the iMac.

Responsible for all original photography and video content onsite and on our social platforms, and rarely found without a camera in his hands, Multimedia Editor Dominik helps us to show as well as tell.