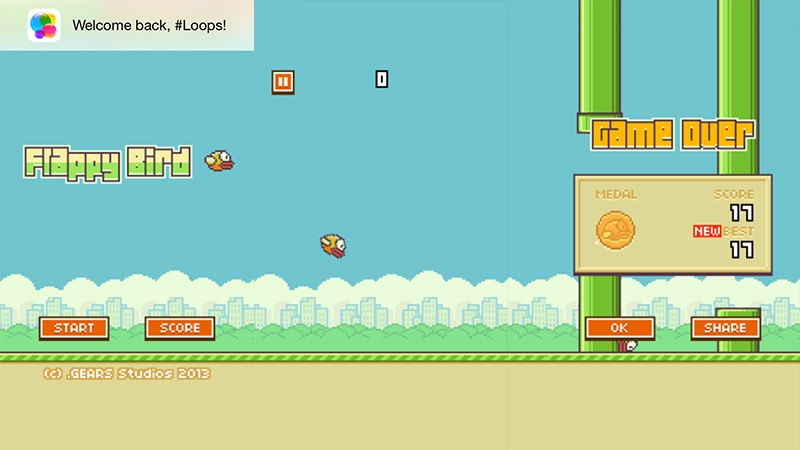 Flappy Bird is a terrible game, but it’s harmless fun. It’s got a high profile because of a so-bad-it’s-good quality, social media humour and is free. And it’s nice to see a free game rather than one that pretends to be free then shakes you down for in-app purchases. Flappy Bird is ruthlessly hard to play though, and each game is mercifully short. It’s nice when the video games industry occasionally throws these curveballs, and we’re sure some executives are cranking through numbers to see if this is the start of a new trend of “Tappy Flappy” games. We wouldn’t bank on it though. We think the meme here is more important than the game. For now it’s a meaningless diversion but in the long run we’d rather Apple’s App Store didn’t start to resemble a gaming equivalent of Meme Generator.

Flappy Bird is a free game by independent game designer Dong Nguyen that is currently topping the charts. Although several months old, Flappy Bird has suddenly shot to fame after a wave of social media exposure. But is Flappy Bird any good? Our Flappy Bird review checks under its feathers.

Update: Flappy Bird has now been removed from the App Store. However, you can still play Flappy Bird using a variety of workarounds.

How to play Flappy Bird

The gameplay premise of Flappy Bird is simple. You have a bird on the screen and tapping it makes the aforesaid Flappy Bird flap its wings and arc up and down. The background is a constant scroll and you have to flap the Flappy Bird through gaps made by large green pipes. If the Flappy Bird touches a pipe, or the ground, your game is over. You score a single point for each gap you pass through.

Flappy Bird is nothing if not frustrating. You’ll start by hitting the first pipe. After several Flappy Bird games you might be up to three or four points. Give it a few hours and you might top 20. You start to wonder if there really is method to the madness: “maybe I need to tap more regularly by counting”, “perhaps I should aim for the bottom of the first pipe”, “what if try double tapping?” This is the route to madness. There is no method here. It’s mostly luck and how good your reaction timing is.

The distance between pipes is narrow, and your control over the Flappy Bird is clumsy and imprecise. Our Flappy Bird record stands at 19 pipes; we imagine many people give up after hitting the first few pipes. On the other hand Game Centre is packed full of people with 9,999 pipes, which we assume is the limit of the game’s counter. Either that or they have a hack. Maybe they’ve found a hack for life that enables them to dodge gainful employment but become a 10th Dan Ninja Flappy Bird game player. Maybe it’s a zen thing. There are unanswered questions.

Is Flappy Bird any good?

Let’s just say this: no Flappy Bird is not a good game. We’re sorry if you’re actually a fan rather than in on the joke. There are upsides to Flappy Bird. Not many but we should outline them: it is surprisingly addictive; instant death games are quick to play and a typical game for us lasts around 10 seconds. So it’s ideal for those brief moments on the tube, or between classes or meetings. It is free to download and it isn’t trying to constantly shake you down via in-app purchases. It does have banner ads but they’re not especially intrusive. In this respect Flappy Bird is vastly more likeable than all of EA’s recent offerings, especially Dungeon Keeper which is currently being held up as the poster boy of everything that is wrong with the video games industry. (See: Developers given until 1 April to comply with new in-app purchase rules: How to stop kids buying iPad, iPhone apps & extras)

There are numerous downsides to Flappy Bird. I guess the main one would be that it’s technically and graphically poor. Actually calling it “poor” is being kind, it’s impoverished to the level of the North Korean tech scene. The visuals are low-resolution and of low quality, the Flappy Bird itself is a yellow ball with giant red lips and a single cyclops eye. The Flappy Bird has three frames of animation to complete the retro-gaming effect. The Start and Score buttons look like Flash-era web graphics. The ground is a rolling two-tone green barbershop pole; the pipes are from Super Mario Bros., the background is a static city made of, what looks like, clip art. It’s hard to imagine a designer choosing a worse font for the Flappy Bird logo: officially it is known as 04B_19 and is like Comic Sans without the self referential irony. The game is repetitive, bland and mediocre.

Make no mistake Flappy Bird is a terrible, terrible piece of software. If it weren’t so popular this wouldn’t be an issue. Flappy Bird could be a fine example of a developer still honing their craft and still better than anything most critics could develop in Objective-C. But it’s not: Flappy Bird is sitting at number one in the charts. Flappy Bird is more popular than games with huge intellectual property behind them, like Despicable Me: Minion Rush or games by long-standing expert publishers like Sonic Dash. Flappy Bird has almost 10,000 reviews and is rated by the App Store at 4 stars. Dungeon Keeper, in contrast, has 108 reviews and is rated at 3 Stars. The public has very much spoken and it likes this game. Flappy Bird is not alone either: the rest of the Free App chart is now overpowered with clones like Ironpants and Flappy Plane. A similar game called Copter Classic from 2012 has re-entered the Top 10. 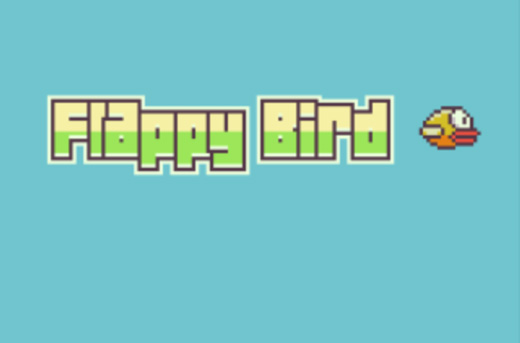 [ Read all our iPhone Reviews here]

Why is Flappy Bird popular?

When something like Flappy Bird is so inexplicably popular your mind starts to wander. Maybe the relentless tapping itself taps into how people feel about their meaningless lives; the lack of purpose serving as a mirror to our age of automation and redundancy of purpose; the relentlessly advancing pipes of death remind us that life is fleeting, and our lives are now spent navigating redundant technology: the Internet is made of pipes! I’m not alone in wondering complete nonsense about this game: “Why is everyone complaining that the game is unrealistic when, in fact, it is very realistic” says Action Reaction after scientifically dissecting the game’s physics engine. The Independent says “is Flappy Bird art?” and links it, hopefully ironically, to Chopin’s Fantasie Impromptu.

Flappy Bird was released in mid-2013 and immediately flew below the App Store radar where, we assume, a few close friends of the developer bought it and said “good for you”. Then a wave of Twitter #flappybird comments arrived, along with Instagram and multiple comedy reviews (the kind you often find on obscure Amazon products like the Three Wolf Moon T-Shirt). Is Flappy Bird simply a meme, an iOS equivalent of Doge? It doesn’t matter that it’s bad, because all memes are low-rent; they wouldn’t be memes if they didn’t have a homespun quality. Is Flappy Bird the equivalent of Wrecking Ball, on the surface fantastically bad but it becomes popular leading everybody to wonder if it secretly has something clever about it. Is Flappy Bird the iOS equivalent of Bizarro World, where up becomes down and bad becomes good and we can no longer tell the difference. A social media prank? The App Store’s equivalent of iTunes getting Killing in the Name Of to Christmas number one.

All of the meme stuff is true, but alongside that we have to also ask: is this now genuinely the sort of game people enjoy playing on the iPhone? Simple, quick, funny and above all free. There’s no purchase fee and no in-app fees here. Just a few ads that aren’t annoying given the brief nature of each game. It’s easy to pick up and play collectively, we imagine mostly in the classroom, because each game lasts just a few seconds.

There have been  some suggestions that the developer must have used bots to create artificial downloads and reviews. However, the accusation seems to have no merit and the sudden spike in downloads could just as easily be attributed to meme-like popularity. Once something gains critical mass its popularity skyrockets exponentially. For our part we believe that Flappy Bird is naturally popular.  Know Your Meme has a pretty good breakdown of how Flappy Bird spread virally.

Sometimes people get inexplicably lucky. Dong Nguyen, who comes from Vietnam, is the first to admit so. But Nguyen, has two other titles in the App Store top 10 free apps chart (Super Ball Juggling and Shuriken Block). Between the three titles he has an enviable position for an independent games developer. He must be doing pretty well from all that advertising revenue ( allegedly Flappy Bird makes $50,000 a day from advertising) and with that kind of money Flappy Bird could lead him to greater things. It will certainly cause other developers to take note.

Nguyen told Techcrunch: “I don’t know how my games can be so popular. Most of my players are kids in schools. I would like to thanks them for playing my game and sharing it to other people.” 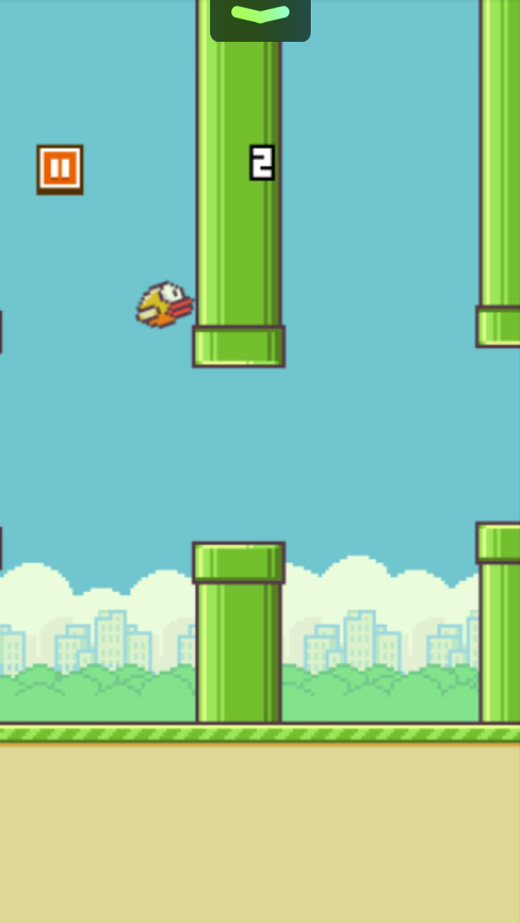 A Flappy future for games

Where one meme arrives others are sure to follow. There’s a lot of concern in the games industry about the effect of app stores on gaming. It’s proved fairly impossible to command a traditionally high price any more to enable the kind of high quality development that gamers are used to; and in-app purchases are notorious among parents and deeply unpopular among customers. We can’t imagine the hatred spawned by microtransactions leading to a good long-term business plan. But meme-based gaming is hardly the resolution we were looking for. While we enjoy memes we’re not comfortable with the App Store being swamped in them.

Apple vets and rejects many apps, but it is actually far more freewheeling than other games publishers. You’re not going to see Flappy Bird on the Xbox Store or sporting an Official Nintendo Seal any time soon. Mind you, you might not see the Official Nintendo Seal anywhere in the near future given the way the Wii U is selling. While Apple’s open approach to developers has allowed a million apps and endless variation, we don’t want the App Store to become the gaming equivalent of Meme Generator. We doubt Apple would let it come to that, but the question still remains: what is the games industry turning into?

At the end of the day Flappy Bird is still a one-star game. 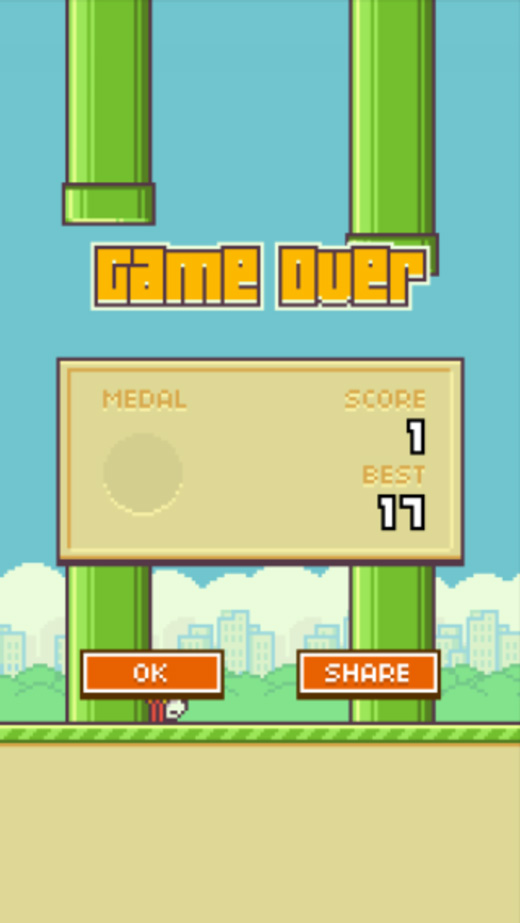