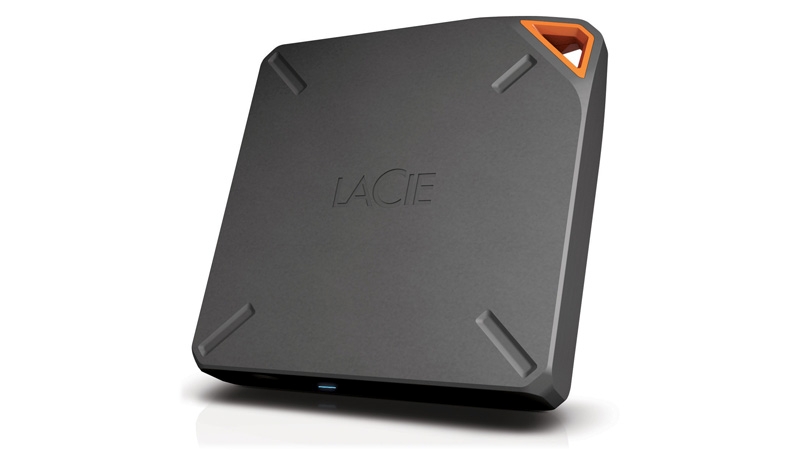 At £169.90, the Fuel is considerably more expensive than a conventional USB hard drive. However, it could earn its keep if you regularly shoot a lot of photos and videos on your iPhone or iPad. It will also be handy if you’ve got a lot of music and film downloads that won’t fit onto the limited storage on most mobile devices.

LaCie was taken over by Seagate about a year ago, but the two brands are being kept separate as LaCie is the more well-known name at the ‘premium’ end of the market (i.e. Mac users who don’t mind paying a bit extra for nicely designed gadgets). Inevitably, though, there will be some overlap between the two brands, and the new LaCie Fuel is essentially LaCie’s version of the Seagate Wireless Plus drive that we reviewed a few months ago.

At first glance, though, the Fuel looks completely different. The Wireless Plus has the rectangular design of a conventional hard drive, while the Fuel is a squat, square little device, with a carrying hook on one corner. LaCie seems to be going for a kind of outdoor vibe here, and its promotional video shows the Fuel sitting on a rock while wholesome American youths lark around shooting photos and videos in the great outdoors, which they then zap straight onto the Fuel. To be fair, the Fuel does seem quite sturdy, so while its £169.90 price tag means that it’s a bit more expensive than the Wireless Plus it’s probably the better choice if you are prone to that sort of outdoorsy activity.

See also: How to transfer Time Machine backup to a new Mac

Cosmetic differences aside, the Fuel and the Wireless Plus are identical in most other respects. Both devices provide 1TB of internal hard disk storage, and include a USB 3.0 interface for connecting to a Mac or PC, along with 802.11n wireless for mobile devices such as an iPhone or iPad. When it’s connected to a computer the Fuel works like an ordinary hard disk and draws its power from the USB interface – although it’s formatted in the Windows ExFAT format and can’t be used for Time Machine backups.

To use it with an iPhone or iPad you just need to press the power switch on the side of the Fuel to activate its built-in wifi. You’ll also need to download the Seagate Media app – that was originally designed for the Wireless Plus – in order to access files stored on the Fuel.

That might be a bit confusing for people who don’t know about the connection between Seagate and LaCie, but at least the app itself is straightforward and easy to use. The first time you run the app it will guide you through the process of initially connecting your mobile device to the Fuel’s internal wifi, and then show you how to connect the Fuel to an existing wifi network so that you can continue to use the Internet as well.

The app allows you to stream photos, music or video stored on the Fuel, and you can also transfer files between the Fuel and your mobile devices in order to free up some space on your phone or tablet. The Fuel also includes a rechargeable battery that lasts for up to 10 hours, which should be enough for a full weekend of larking around in the great outdoors.