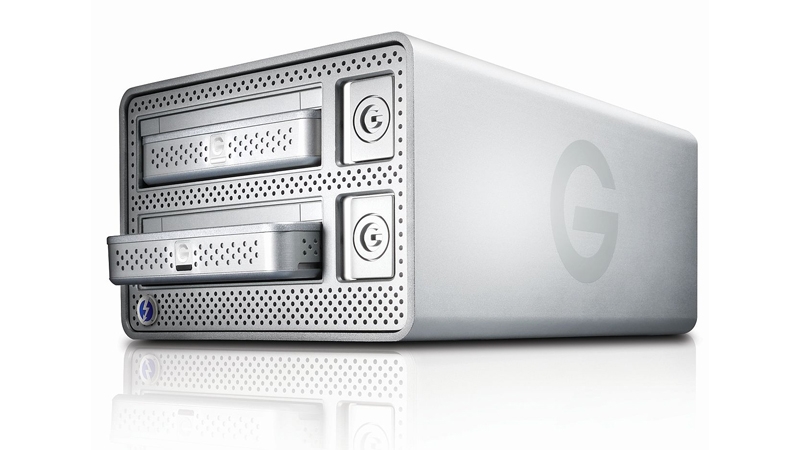 We found the G-Technology G-DOCK ev easy to use, and the performance was as good or better than you can expect from laptop disks, assisted by higher 7200rpm spindle speeds. Using the G-DOCK ev enclosure’s Thunderbolt connection or the individual drives’ USB 3.0 interface, we were seeing the top performance available from 2.5in notebook disks. With SSD storage becoming more affordable, we hope this could be an option for future upgrades too, even if that’s unlikely from a wholly brand owned by a hard disk manufacturer.

The G-Technology G-DOCK ev with Thunderbolt is an external storage solution made for the busy video editor and other professional users. The drive is a solidly built aluminium enclosure, which comes with two 2.5-inch portable hard drives that fit into two shuttered bays. These can be used separately, inside or outside the enclosure; or RAIDed together inside if required.

The case looks stylish and follows the design of other G-Technology drives, which in turn follow the classic Apple Power Mac G5 look – all satin white metal with perforations for cooling. On the back panel is a small fan (which in our tests ran very quietly), a DC power inlet, Kensington lock slot, power switch. And two Thunderbolt ports, which will let you daisy-chain onward to additional Thunderbolt devices if required.

The front of the unit has flaps to cover the two slots, into which you plug the supplied 2.5in drives. Large eject buttons sporting the company’s ‘G’ logo sit to the right of each slot. And at the bottom left of the front fascia is a small Thunderbolt logo to remind you that this indeed is a Thunderbolt drive.

This storage device is not like your regular desktop RAID drive – its two hard drives, similarly enclosed in aluminium, can be pulled out of the G DOCK ev enclosure and used as independent portable drives, thanks to their built-in USB 3.0 interface. Just make sure your Mac has USB 3.0 ports or you’ll be stuck with slow USB 2.0 transfer speeds. For the Apple MacBook Pro, that means finding a mid-2012 or later model for USB 3.0 compatibility. 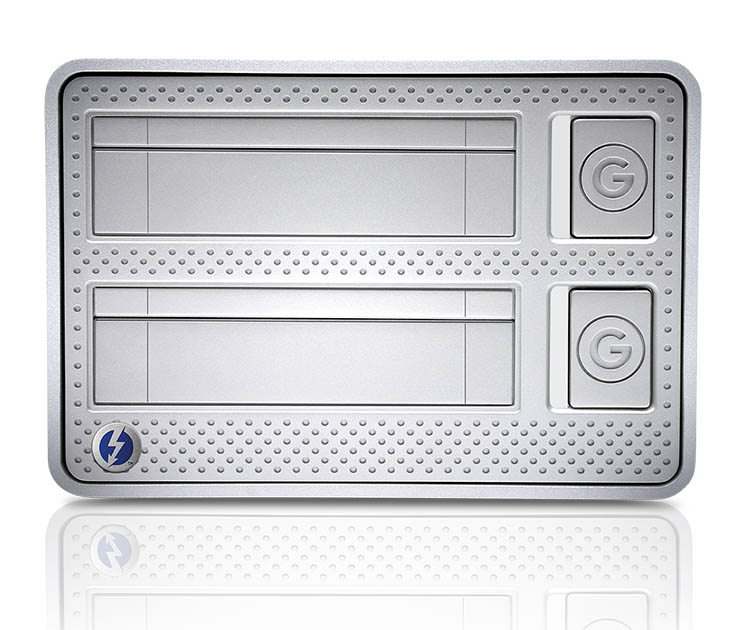 Accessories in the box include a small 12V power adaptor, two USB 3.0 cables, and one Thunderbolt cable. It’s nice to find cables already provided in the box, particularly Thunderbolt since those cables start at £25 each. The USB 3.0 cable is rather short at only 46 cm but that’s fine for portable needs; unfortunately we found that the 52 cm Thunderbolt cable was too short to be used with our iMac, as we needed to place the drive to the left of the computer’s foot. If you can accommodate the G-DOCK ev immediately behind or to the right, a 0.5m cable should just reach. You can obviously purchase a longer TB cable if you need to too.

The drives came configured to work with a Mac, formatted as HFS+ (you can format it to work with Windows or Linux) and are set up in JBOD mode (just a bunch of drives). This means you can access two individual 1TB disks. They can also be set up in RAID 0 (mirror) and 1 (stripe) modes for either redundancy or performance respectively.

The drive does not come with any special setup software although you can download G-Technology Assistant software from the G-Technology website to more easily help you to setup your drive for a specific mode. It’s not strictly necessary though, as the software still only points you to OS X’s Disk Utility app, which can be found in /Applications/Utilities.

G-Technology Assistant software can also install LED drivers so you can monitor the drives activity via front LEDs next to the eject buttons. These glow different colours to let you know when it’s safe to pull a drive out, or if there is a problem with the RAID array.

We are used to using Disk Utility to format and partition drives, but if you’re not so comfortable you can download a PDF setup instructions from G-Technology which guides you step-by-step. Do follow carefully if you don’t want to accidentally format the wrong drive.

So which RAID mode is best for you? Unfortunately there is no single mode that has everything. You need to decided before you start using the G-DOCK ev what is more importa nt to you: performance, reliability, or portability.

If you’re looking for sheer speed then you’ll be pleased to hear that the G-DOCK ev drive can deliver. We set up the drive in RAID 0 to see best possible performance, and also to access the full 2 TB of potential storage capacity. RAID 0 works by writing data across both drives (‘striping’) and we set up the disks in Apple Disk Utility with an optimisation for large file transfers, using the 128 kB Block Size setting.

In the lab we saw the drives combine to give a maximum speed of 254 MB/s for sequential reads and 244 MB/s for writes, tested using Blackmagic Disk Speed Test.

We also tried Quickbench to assess transfer of other file sizes. Averaged from 4 kB to 1024 kB, the RAID 0 read result was 27 MB/s while the write result amounted to 43 MB/s. Those are not great results, but since the RAID was optimised for large files, perhaps not too surprising.

Things got better with large files. In the same Quickbench test we saw sequential read speeds hit 260 MB/s and writes up to 356 MB/s, although the latter result was almost certainly assisted by some write caching; files larger than 10 MB which wouldn’t benefit here showed a more realistic figure, still up to 256 MB/s though, which is a great result from a pair of notebook drives.

In real-world use we found it fast enough to edit three streams of 1080p video in Final Cut Pro X, with two audio streams and one graphic layer, and without noticing any hiccups or delays.

If you’re more concerned about having your project backed up at all times, then RAID 1 (mirroring) will be the mode to choose. Here you also use both drives, but you only get 1 TB of storage because your data is replicated across both 1 TB disks. If one disk should fail you have an exact copy on the other. However performance was down at only 122 MB/s for reads or writes. That’s still very usable but note that it’s best-case performance – unlike RAID 0, this setup will get much slower as the disk fills up.

You might think that taking out one of the portable drives and using it on the go, then popping it back into the G-DOCK ev would quickly sync the data together. Unfortunately in our tests we found that this breaks the mirror RAID every time, and results in the G-DOCK ev trying to rebuild itself over again. This took 2 hours in our case, despite us only adding a 5GB file to the drive.

To take advantage of the portability potential, so you can carry and use one disk at a time via USB 3.0, you will need to set the G-DOCK ev in JBOD mode. This will also give you a total of 2 TB of space, and two separate 1 TB drives will appear on your desktop. As you’re using each drive separately, this again give you the 7200 rpm disks solo performance, which we measured at around 128MB/s with an empty disk.

However now you are free to take one or both drives out of the G-DOCK ev and use them with the USB 3.0 cable as portable storage – when you’re on a photoshoot and need to copy footage off the camera, or taking your project to show a client, or just editing your footage on the go. You can also keep organised by having different projects on different drives. Especially since additional 1 TB drives can be purchased separately. When you get back to your workstation you simply plug the drives back into the G-DOCK ev and they’re ready to go.

You could also have one drive as the project drive and the second one as a backup, using third-party sync software such as Carbon Copy Cloner. Then you can set the drives to always sync data, immediately after the drive is returned back into the G-DOCK ev enclosure. We would have preferred this obvious function to have been implemented into the G-Technology Assistant software.

Responsible for all original photography and video content onsite and on our social platforms, and rarely found without a camera in his hands, Multimedia Editor Dominik helps us to show as well as tell.