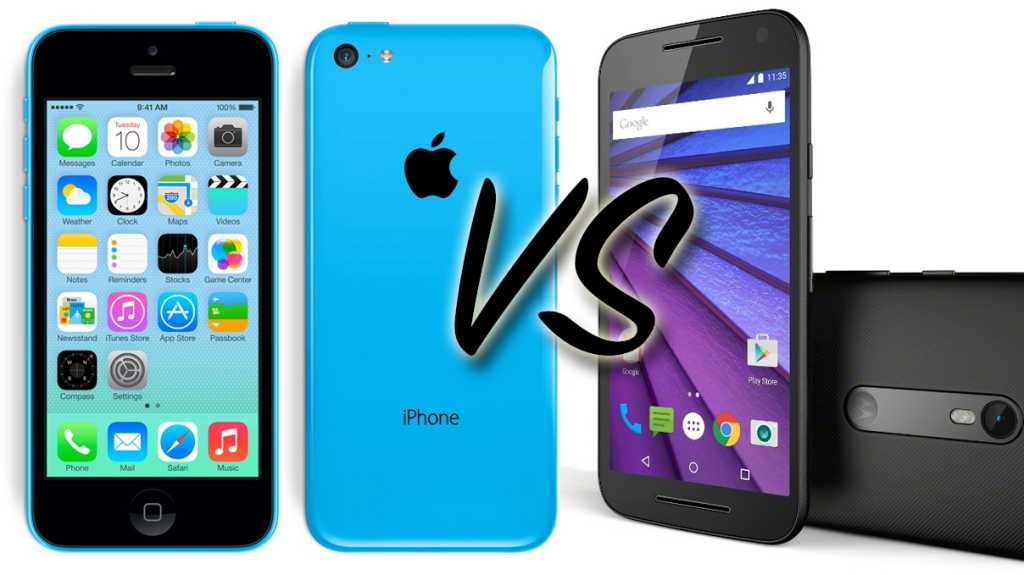 These two handsets are both great. We expect that no-one would be disappointed with the purchase of either. The Moto G is bigger and bulkier but has a bigger screen. You will, however, notice the extra money you have in your pocket after choosing the Moto G rather than the iPhone 5C. As mentioned, we prefer iOS to Android – although that is a subjective thing. If you want a budget phone, the Moto G wins. But for all other users the iPhone 5C may well be the better bet. Here comes the controversy: I don’t know why you would get the iPhone 5C. If cost is your concern, buy a true budget phone. If you want the best, get an iPhone 6. Opting for the iPhone 5C is a penny pinching compromise of the worst kind.

Why compare the Moto G and the iPhone 5C?

In another life I work for other publications such as PC Advisor, Android Advisor and Tech Advisor. As a consequence I take a broader view of the smartphone world than do some of my more Apple-focused Macworld colleagues. This means that I can appreciate how far Android had come. The more recent flagship Androids offer a truly premium experience, although arguably not quite to the curated level of iPhone.

Budget smartphones are undoubtedly improving, and here Android comes into the limelight. As the top of the market has become saturated with iPhones, Windows Phones and premium Androids from Samsung, Sony and their ilk, opportunities of growth have appeared at the bottom of the market. There are plenty of potential smartphone customers who want email, web-browsing and Facebook on their handsets, and would be prepared to pay £150 or less to get it.

Apple is unlikely to ever dip its toes into these murky waters. In its post-Steve Jobs II era Apple is a resolutely premium product maker. It makes great devices for those who can afford them, believing that true value can be found in longevity and quality. But in 2013 Apple did make one concession to the budget phone market. It offered customers a cheaper alternative to the then-flagship iPhone 5S in the form of the iPhone 5C, which is still available to buy from Apple today starting at £459.

The iPhone 5C is, in essence, a rebadged version of the iPhone 5. It’s not a budget phone, but it is the cheapest iPhone you can buy. So in the interests of understanding better how the iPhone 5C fits into the market in 2015, we compared it to the newest generation of one of our favourite true budget handsets. Cheaper doesn’t always mean better – in fact rarely does it. But what does the extra £160 get you when you choose the iPhone 5C over the Moto G?

As you’ll find by reading on it gets you a thinner and lighter phone with a better (though smaller) screen. Arguably it also gets you access to a better App Store and platform in general. But my personal view is that the iPhone 5C is neither premium enough to be worth the extra cash, or cheap enough to be considered a good deal. If it was my money I’d either get the iPhone 5S or save my money and go truly budget. (For a more in-depth view of the new Moto G, read PC Advisor’s Motorola Moto G 2015 review).

The new Moto G is a staggeringly good deal if you’re in the market for an Android phone. As you’re reading Macworld we rather suspect that you aren’t’, but it’s worth checking out the opposition from time to time. What you’re getting here is a mid-range Android phone at a budget phone price. You can pick up a Moto G with 8GB storage for £159. Step up to the 16GB model and you’ll need to find just £189.

The iPhone 5C is the cheaper of Apple’s current smartphones, but even though it’s almost two years old it’s still not cheap. An 8GB model (which is now your only option) will set you back £319. So you’d have to be convinced that the iPhone was the better bet than the Android phone to opt for that handset. As you’ll see from the following analysis, that is by no means an obvious decision to make.

Both are readily available to buy right now, but it’s worth noting that the Moto G was only released at the end of July while the iPhone 5C was first launched in September 2013 and could well be nearing the end of its shelf life as we approach the expected September Apple iPhone event. 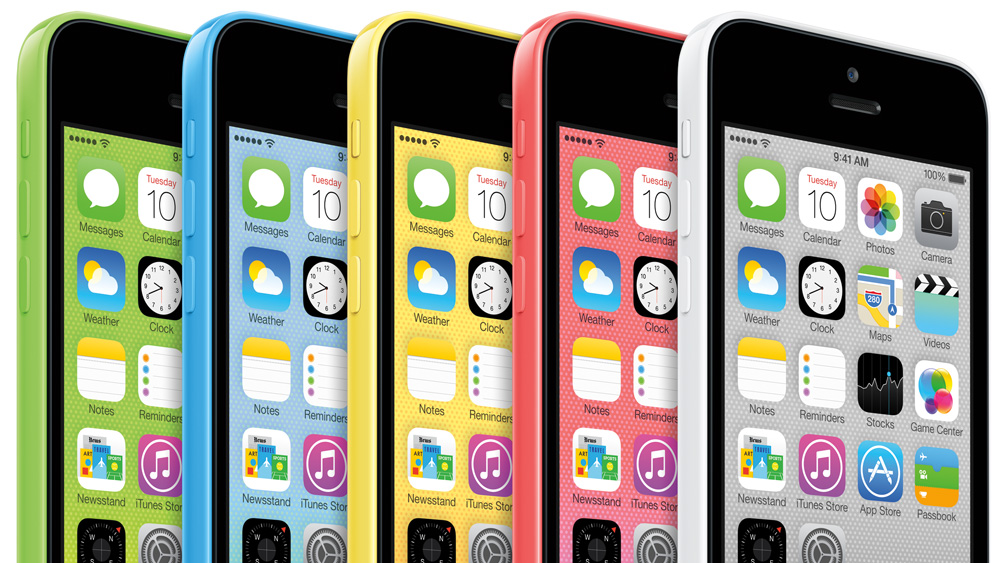 With the iPhone 5C Apple took its successful iPhone 5 handset and gave it a colourful new coat of paint and a plastic casing. There are five colour options: white, blue, pink, yellow and green.

The Moto G also offers a huge variety of colourful options, though they require you to buy through the Moto Maker service that costs an extra £20 but does let you pick exactly what colour you want each part of the phone to be. Otherwise you’ll get the option of white or black. There are interchangeable coloured Moto Shells available, too, or a ‘Flip Shell’ cover which instead of going over the existing rear cover and making the phone fatter, replaces it. 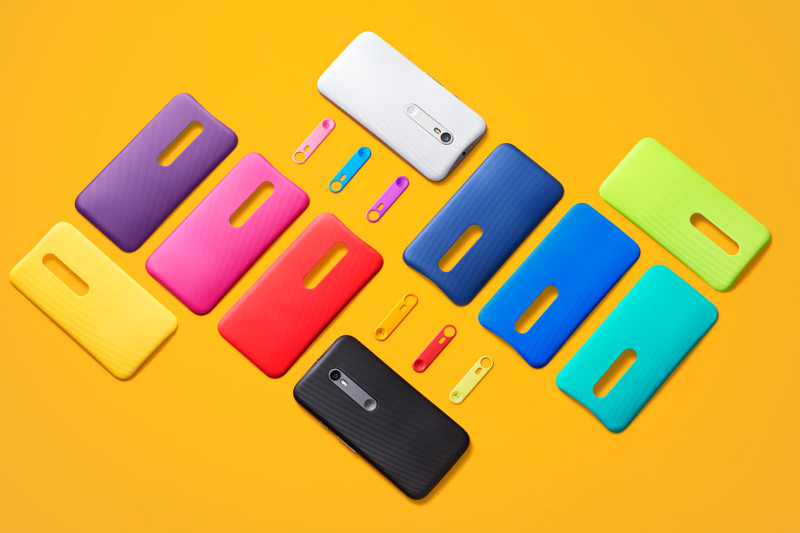 The iPhone 5C has a polycarbonate plastic casing. As a 9mm phone the iPhone is quite big for today’s superthin standard, but the 5C doesn’t feel thick or chunky in the hand, and we think it’s the most ergonomic iPhone since the 3GS. It weighs just 132g, too.

The Moto G is also made with plastic, and is neither particularly thin nor super light – 11.6mm and 157g – but feels nice in the hand and has been made to look more stylish than previous generations with the metal strip that houses the rear camera and the iconic dimpled logo.

Clearly this is a personal thing – the point is that both of these phones are well designed and built to withstand the rigour of regular use. The iPhone 5C is smaller, thinner and lighter, though. 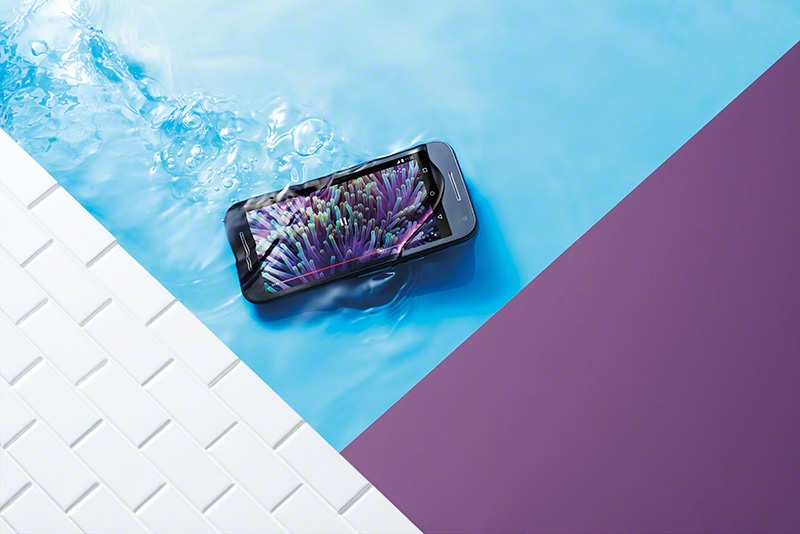 Where the Moto G really sets itself apart from the 5C when it comes to build is its waterproofing. It’s IPX7 rated which means you won’t have to worry if you spill your drink on it or drop the Moto G down the toilet. It can survive being submerged in up to one meter of water for up to 30 minutes. You certainly don’t want to try that with the iPhone 5C, though. 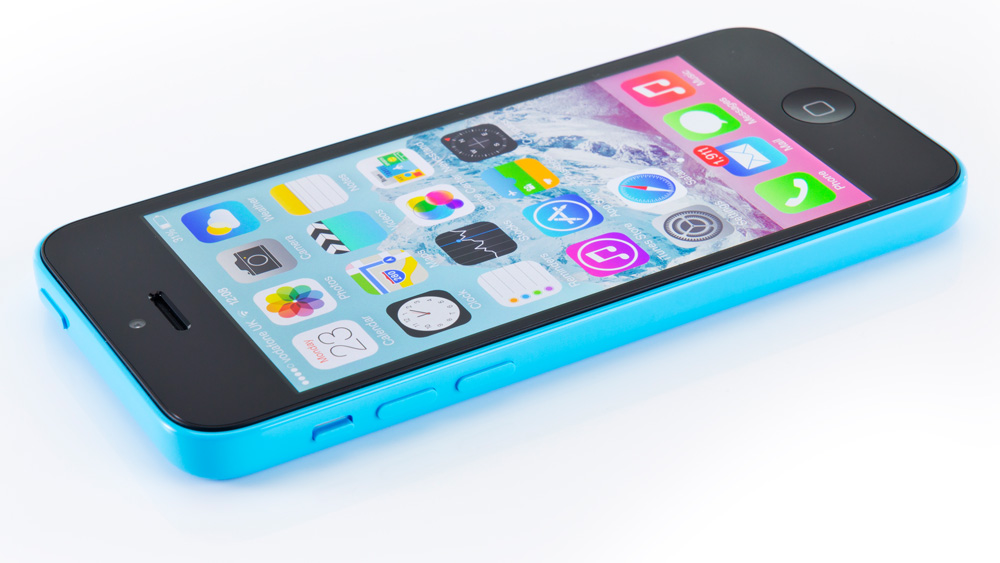 Screen size is a great way to choose between two smartphones – you’ll want to pick a size that’s comfortable for you personally. For under £200 the Moto G comes with a quite large 5in display with 720p resolution. That means a pixel density of 294ppi, which is a bit lower than the iPhone 5C. You’ll find, though, that the colours are punchy and the viewing angles are great.

The iPhone 5C’s screen is much smaller at 4in, which is quite rare among smartphones these days so could be a selling point for some people, but equally disappointing for others, depending on whether you prefer a smaller handset over more screen real-estate. It looks crisp and colourful, and offers a 1136 x 640 pixel resolution with a 326ppi pixel density.

The Moto G doesn’t have flagship hardware but it does have much higher specification than you’d expect from a phone that costs this little. A quad-core 1.4GHz Snapdragon 410 chip coupled with 1GB of RAM in the 8GB model or 2GB in the 16GB model. We’ve spent some time with the new Moto G and found performance to be good, but we’re in the process of running our full set of benchmark tests for a better comparison and will update this article with the results soon.

By contrast the iPhone 5C has an A6 dual-core processor with a 1.3GHz clock speed, coupled with 1GB of RAM.

iOS 8 running on the iPhone 5C feels smooth and responsive. Apps and web pages load swiftly, and panning around Apple Maps isn’t jerky at all.

With no expandable storage available on the iPhone 5C the Moto G manages to outshine it. Only the 8GB iPhone 5C remains on sale, and we really don’t think that’s going to be enough for most people.

The Moto G also comes with 8GB internal storage but that’s with a microSD card slot for up to 32GB more, and there’s also a 16GB model available with that same microSD slot.

The Moto G’s new camera set is impressive for a budget phone, with a 13Mp snapper on the rear and 5Mp on the front with a wide-angle lens for better selfies.

The iPhone 5C’s camera is less impressive, with a front-facing FaceTime camera that takes 1.2Mp photos and an 8Mp camera with a single LED flash on the back. It can also capture 1080p HD video and has similar modes to the Moto G including panorama, HDR, slow motion and burst mode. You an rest assured that the pictures and video will be high quality, but we’re not sure they can beat the Moto G.

It’s worth noting that neither the Moto G nor iPhone 5C has a removable battery. Each phone offers decent smartphone battery performance of one or two days with an average use. 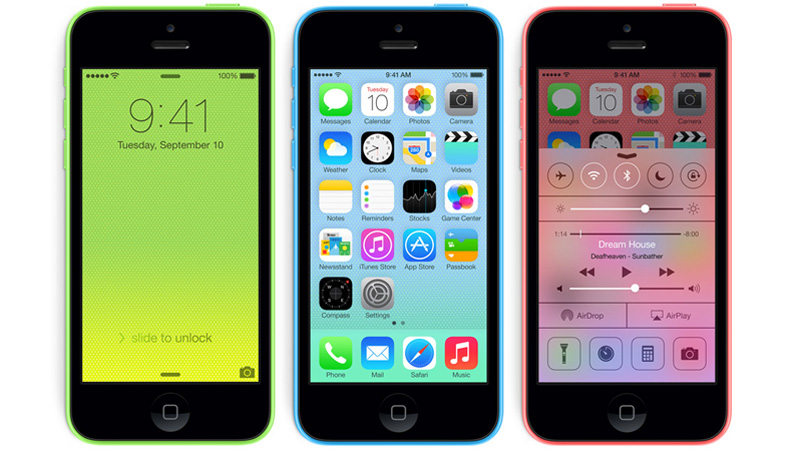 As you might know, the iPhone 5C is compatible with Apple’s latest mobile operating system, iOS 8. It’ll also be able to upgrade to iOS 9 when it arrives next month. You can find out more about iOS 8 here and iOS 9 here.

On the other hand, the Moto G runs Android 5.1.1 Lollipop, with a few added apps including Moto Assist for voice commands, Moto Display and Moto Actions.

You won’t regret choosing wither Android or iOS, but unless you have strong feelings either way it’s unlikely to be the factor on which you make your purchasing decision. We still think iOS offers the best mix of apps, stability and security, and the best experience overall, but there’s no doubt that Android has come a long way. As a Macworld reader we suspect you favour iOS, and that would tend to be our position.