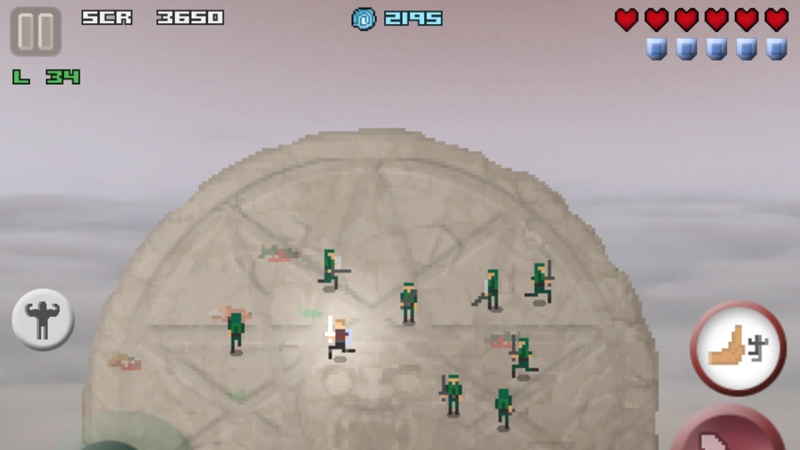 Only One is great fun, silly and characterful, and while we wish they’d simply charged £1.49 and tilted the power collection side more in favour of the player, it manages to avoid most of the worst aspects of freemium. It made this reviewer’s thumb sore, which is usually a good sign.

We’ve spent a lot of time lately writing about the problems with free apps and trying to convince iPhone and iPad owners to spend more money on software; not for ethical reasons, but simply because of the sorts of app the free model encourages. Free apps – and particularly free games – tend to be chores: FarmVille-style trudges which will do anything in order to encourage you to pay for time-skips and boosts and cheats. To pay not to play, in effect.

But that word ‘tend’ is important, and while the model seems innately predisposed towards dullness, not every free game is dull. Only One, for instance, is a lot of fun, even if the freemium model nevertheless makes its obnoxious presence felt every now and then.

It’s a retro-looking fantasy brawler that takes place entirely on a vertiginous cliff top. Little pixellated enemies – swordsmen, archers, annoying wizards who shoot fireballs – spawn periodically, and it’s up to you to chase them around and either slice them to death or knock them off. A green virtual joystick appears wherever you plonk your left thumb, and an attack button sits on the right. The combat’s surprisingly well-realised, too, with satisfying sound effects and a smidgen of tactical depth. 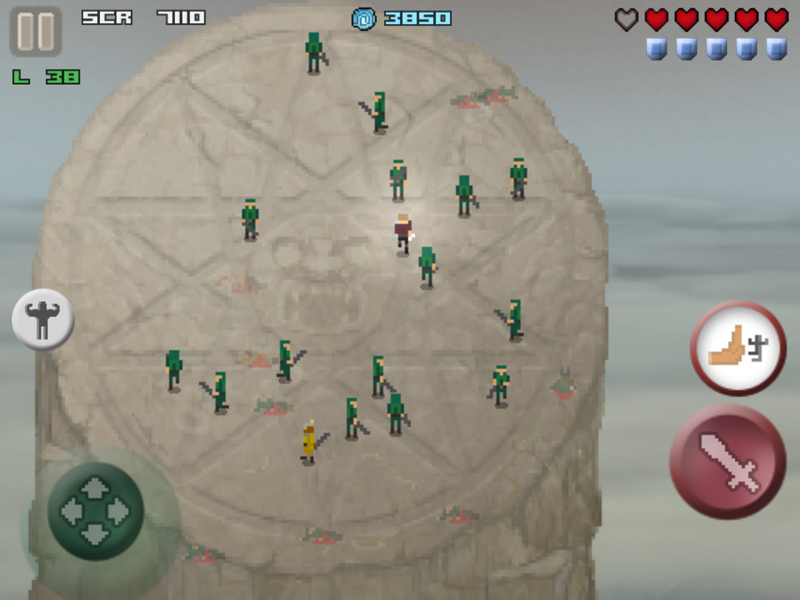 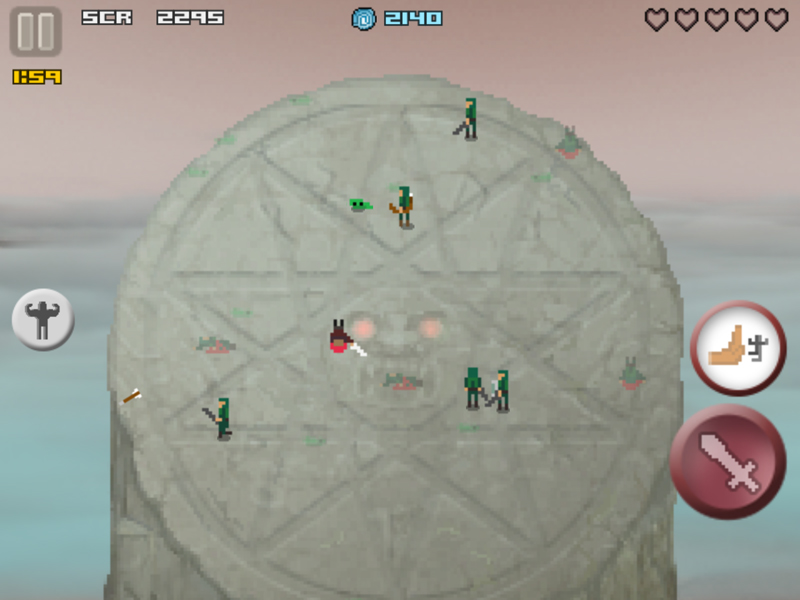 As they die, these enemies drop goodies for you to pick up: heart refills and shield power-ups, but most importantly power tokens that you spend on the upgrades (extra heart capacity, for instance, and special powers such as a Jedi-esque force push) that quickly become vital to your survival.

Power is the currency of Only One, and its driving motivation, to the extent that it influences your combat tactics: shoving baddies over the cliff is usually an easy kill, but since a foe slain in this way will take most of their trinkets down with them, the connoisseur tries to do most of his work more centrally. Knocking people off is still handy (and satisfying) for bringing down the numbers when a big mob appears, however.

And so you proceed, slashing, shoving, picking up, dying every now and then. The simplicity of all this is livened up by silly jokes and references – often shouted out by falling enemies – and the gradual introduction of new villains and purchasable abilities. And a real highlight is that every 10 levels you fight a boss, with visible health, an amusing name and a unique appearance and fighting style. (Beat the boss and from then on you’ll restart from that point.) 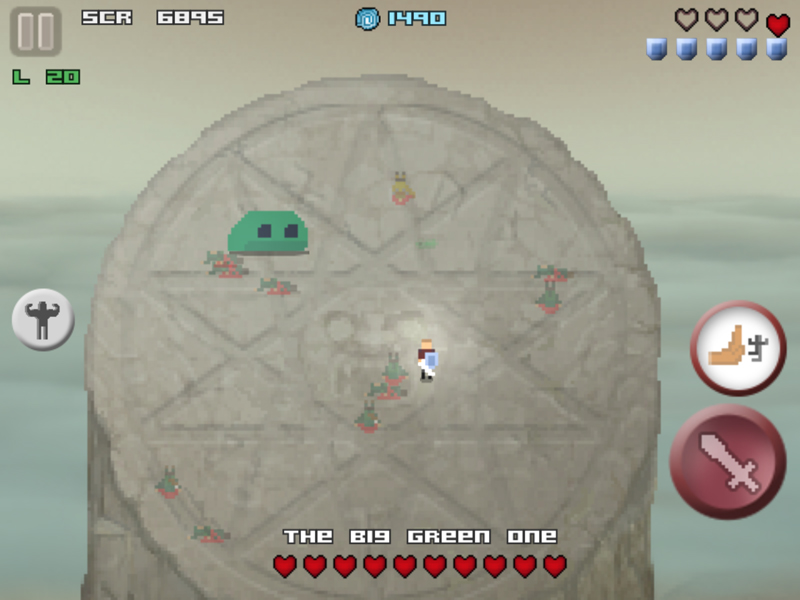 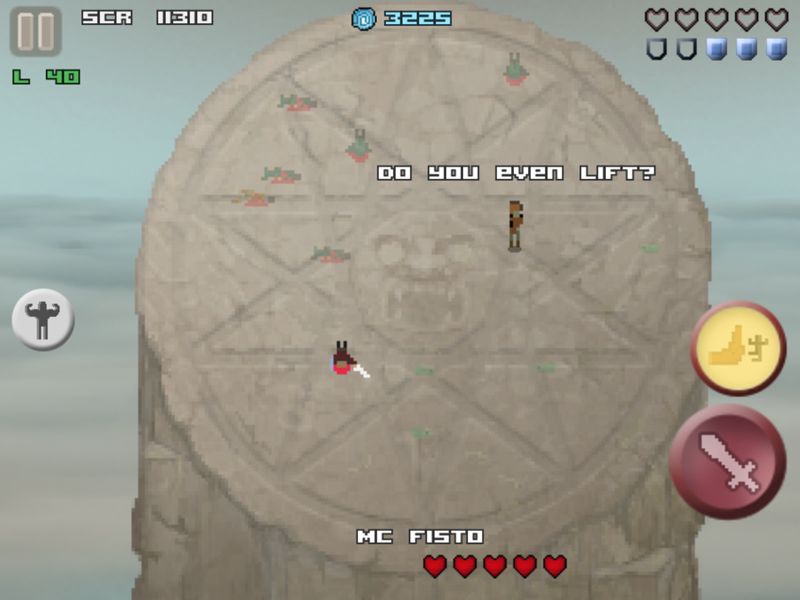 All of which is excellent. The only problem is the way it’s been weighted, which is quite obviously intended to lever open a few reluctant wallets. There just isn’t enough power on offer. Even diligent collectors will find that their supply of power is vastly exceeded by the cost of most upgrades, which leaves the obvious temptation of buying the stuff with real money.

There are two aspects to this that we applaud, however. One is that the prices are low; far too often developers merrily add buying options that only a madman, or someone in the throes of crippling addiction, would countenance. Dungeon Keeper sells a ‘Mountain of Gems’ for £69.99. Only One tops out at a tenth of that.

The other is the inclusion of a sensible compromise option. Buy Ultimate Power for £1.49 and your power is subject to a permanent 2x multiplier, and you get access to the full range of abilities, many of which are otherwise locked. Our advice would be to think of the game as a £1.49 purchase rather than free, and pay up. Most won’t, of course.

Mind you, some of the less savoury aspects of modern freemium gaming do make an unwelcome appearance. Only One fairly often requests a rating, and offers 500 power in return – a grubby (if understandable) approach, and one that sullies the game’s own values. At least it doesn’t specify a good rating.

It also guilts you quite shamelessly when you try to close the menu where you buy power. “Buying power helps improve the game and supports the developer!” it says. Then you have to click the green tick to exit, even though you’d previously used the red cross. It all feels a tiny bit desperate, even if we really do understand how difficult a market the App Store is for small developers. 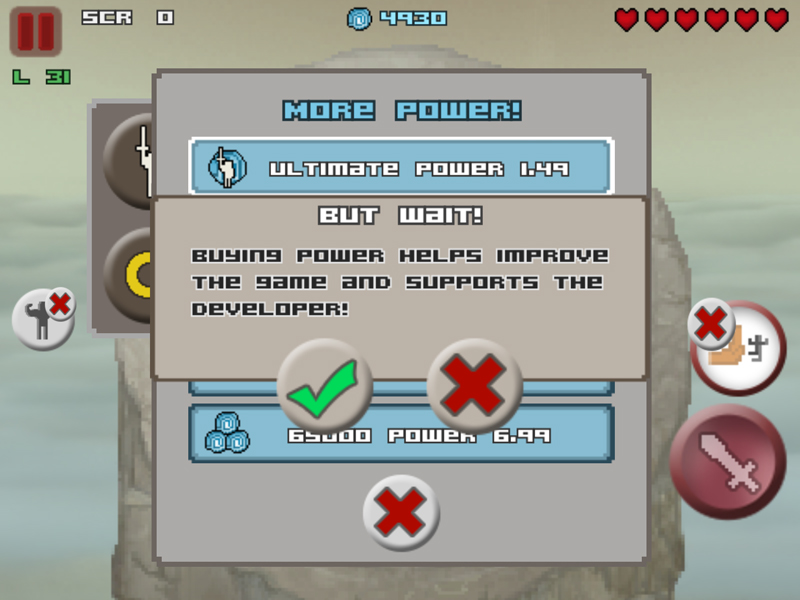 But let’s look past these small reservations and enjoy this for what it is: a nice, straightforward and quite funny fighting game that’s free without constantly begging for money. If we can’t get rid of freemium, it would be nice if we could at least have freemium games that are like this one.