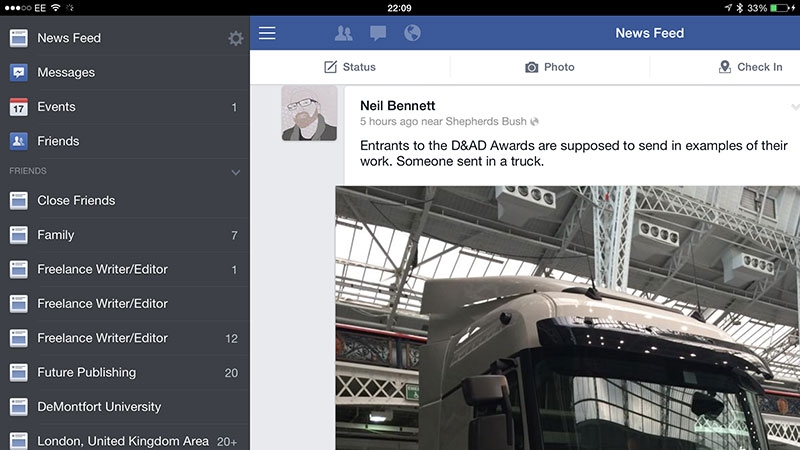 On the whole Facebook 8.0 for iPad and iPhone is a good step forward. The selective sharing features are an important addition to Facebook. Especially as Facebook has become such a part of our everyday life. Facebook for iPad and iPhone is a slick and clean app that is easy to use. There are some aspects of the desktop experience that are either missing, or hard to find, we find it hard to manage our friends lists on Facebook for iPad and iPhone.But it’s surprising how much of the whole Facebook experience is now wholly mobile. With this app installed you may hardly ever use the Facebook website again. While the new Facebook for iPhone and iPad isn’t as interesting as Facebook Paper it’s certainly more functional. And we’re glad to see Facebook improve matters with a slew of speed enhancements and bug fixes.

The Facebook app for iPad and iPhone is brimming with features and the latest version Facebook 8.0, is now available from the App Store. With the Facebook app for iOS downloaded and installed on your iPhone, or iPad, you have the full Facebook experience: view news feeds, add status updates, upload photos. Everything you need to share every aspect of your life with friends and family.

Our Facebook for iPhone and iPad review looks at the following:

Is this the best Facebook app for iPad and iPhone?

There are times when some features in Facebook for iPad or iPhone seems obscure. The Option to show stories by Top Stories or Most Recent is tucked away in a Settings cog next to News Feed in the sidebar. You can view your News Feed by Close Friends; but we can’t find a way to view stories from just Friends (as opposed to Friends and Pages). We follow a lot of Pages, so couple this with the sponsored advertising, and we do seem to have to hunt for status updates from real people. Your mileage may vary depending on how many people you’re friends with, versus how many pages you Like.  Having said that, Facebook has done a good job with Facebook for iPhone and iPad. Facebook for iOS is a clean, smart and easy-to-use app.

Is the Facebook app for iPad and iPhone worth downloading?

Facebook has a clean blue and white interface. The news feed takes up the horizontal space and you scroll down to view status updates. The interface is generally simpler and cleaner than the web-based Facebook site. It doesn’t have the Trending and Sponsored sidebar from the web app (although Sponsored posts appear frequently in the main News Feed). On the whole Facebook is increasingly visual, and photos are large and easy to view. Tapping on a photo opens it full-screen, and it is easy to Save and Share photos.

Inserting a link to a web page automatically pulls in images from that page. Tapping on a link opens it within the Facebook browser (rather than bouncing to the Safari app). When you use the iPad in horizontal model a list of your favourites appears on the right-hand side.

Slide your finger in from the left of the display and you’ll see a list of Favourites, Friends, Apps and Settings. You can Like and Comment on posts from pretty much any point in the app.

Meanwhile at the top of the Facebook news feed sits Status, Photos and Check In buttons. The first two do pretty much as you’d expect. If you’re a newcomer to Facebook for iPhone or iPad then you might not have used Check In as often. This searches for nearby areas (such as bars, hotels and businesses) and you can Check In to let people know your current location.

Tapping one of these opens a Messages pane, and their head appears as a floating circle on the right. So it’s far easier to use the Facebook app for iPad/iPhone than in previous apps. On the iPhone Facebook also has an additional App called Facebook Messenger that is used to send and receive Facebook messages.

When you’ve finished chatting you can drag the floating face icon to the Close icon at the bottom of the screen. This doesn’t actually end the conversation (which is considered to be ongoing) but it does remove the floating head icon. We like to use Facebook for chatting: Facebook offers a quick and easy interface, most of our friends are on it, and the floating heads system lets you quickly move between different chats. Photos are presented in a larger format that sticks out from the news feed updates, and if multiple photos are attached to a post you can slide left and right to scroll through them.

The current version of Facebook available on the App Store is Facebook 8.0. This replaces Facebook 7.0 (released in September 2013). According to the official documentation these are the new features:

The third one is important: improvements for reliability and speed is probably the most wanted Facebook feature for regular users. For a long time now we’ve found Facebook to be one of the clunkiest apps on our iPads. The new version seems (to our eyes) to run much more quickly. there are less instances where it doesn’t load news feeds, or web pages that we’ve clicked on (far too often in the old app we would be faced with a blank white screen). It certainly feels a little slicker and more secure to our eyes, but Facebook for iOS is not perfect. 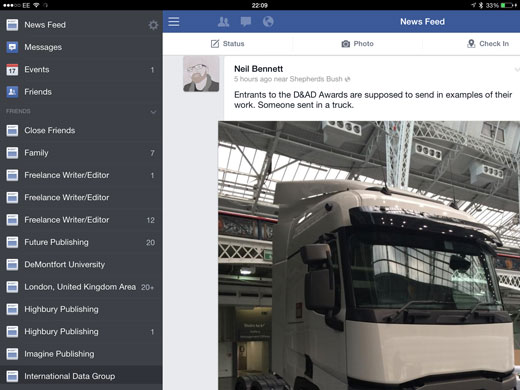 One of the most important new features in Facebook for iPhone and iPad is that you can now selectively share your posts. When clicking the Status button a new area marked To appears. Tap this and you can choose from Friends (the default) to Public, Friends, Friends except and a whole list of new Friend options such as Close friends, Acquaintances, and specific people YOu can even post a status update just to yourself.

In some ways this reflects the growing nature of Facebook on the whole. Many people no longer just have actual friends in Facebook, but more a mixture of friends, family, work colleagues and people you may once have known. Audience Settings in the Facebook for iPad and iPhone app goes a long way towards protecting your status updates. 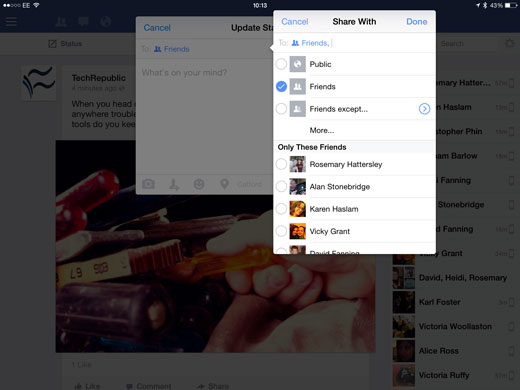 Facebook for iPhone and iPad has a new photo album interface. You can create and share multiple photos from the iPhone. The Facebook app’s integration with the mobile camera on the iPhone and iPad is one of Facebook’s key draws.

This ability to lock sharing by audience also extends to photo albums. When creating an album you can choose who to share it with. This ability to lock down photographs to groups of people will be welcomed by many a drunk student. Sadly you can’t seem to go back and change albums already on Facebook, it only applies to new albums. But it’s a welcome step in the right direction for Facebook.