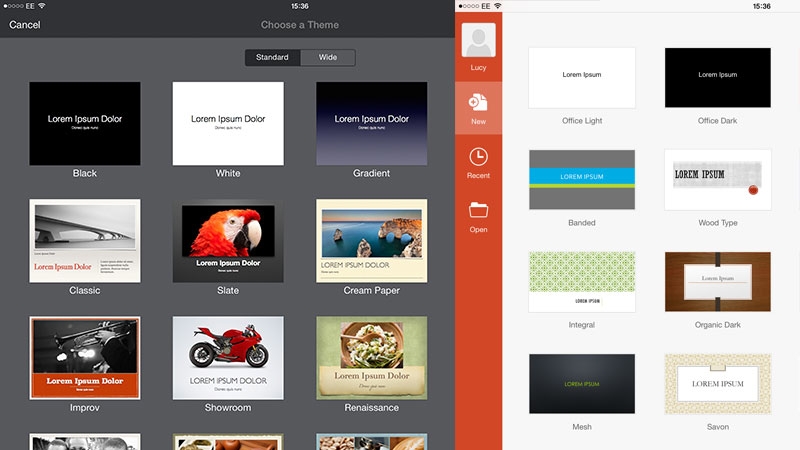 We’d take Keynote over PowerPoint hands down. Both apps perform largely the same function, but Keynote makes better looking presentations to our eyes. We have created, and sat in front of, countless presentations and Keynote is the one to go for. Your audience will thank you.

Should you use Microsoft PowerPoint or Apple Keynote for iPad when creating a presentation? It’s a tough question: both Keynote and PowerPoint apps are now available for the iPad, and both are used to create and show off presentations. The iPad is a killer device for showing off presentation slides, so it’s important to pick the right app for the job.

Presentations can be a hit-or-miss affair, and most people want to look great talking in public. While Steve Jobs’ Keynote speeches were the stuff of legend, many office workers and school children are crushed by dull PowerPoint presentations. This review looks at two of the biggest presentation programs in existence. Read about the latest updates to iWork: Pages, Keynote and Numbers, and troubleshooting advice

In this review we look at:

Both Microsoft PowerPoint and Apple Keynote offer the same kind of basic function. Both apps are used to create presentations: a sequence of individual slides that are often displayed behind a person as they give a speech. Presentations are sometimes displayed via a projections screen in a office, but increasingly people are using them with the small iPad screen to go along with a chat.

The slides you create typically contain text, images and charts. The presenter typically displays one slide, talks about its contents, and then taps the iPad or a remote control to flip to the next slide. Sometimes presentations are set to run automatically and act as point of information displays.

Presentations are created in Keynote and Powerpoint for iPad in a similar manner. You start by choosing a theme: Keynote comes with 30 themes, PowerPoint has 18. Both Keynote and PowerPoint allow you to create presentations in Standard (4:3) format and Widescreen (16:9) format. Standard is usually for displaying on an iPad or projector; widescreen is normally for displaying on a computer or HD television display.

When you’ve chosen your theme, it’s time to start adding text. In both cases you start with a blank introduction slide, and two text boxes marked “double tap to edit”. You then start to replace the dummy text with your own presentation copy. 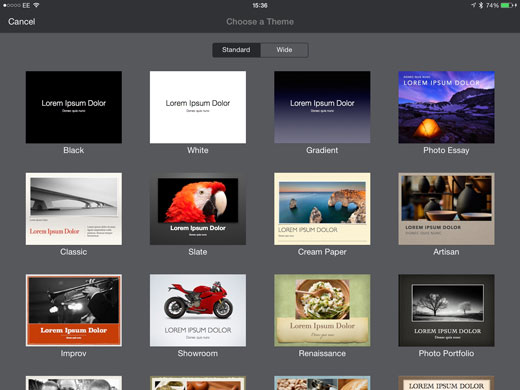 The template selection in Apple Keynote for iPad 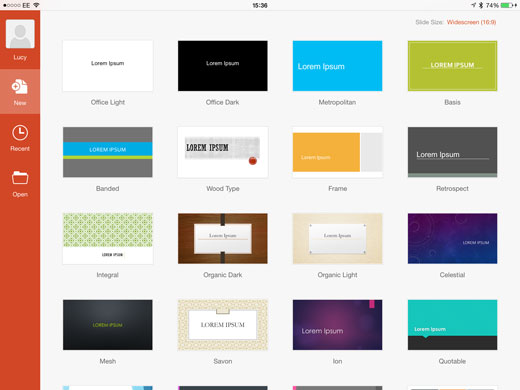 The template selection in Microsoft PowerPoint

As you use Keynote and PowerPoint you’ll add more slides to your presentation. Tap on the Add Slide icon in Keynote and you will get an additional 12 slide layouts to choose from. These are generally a mixture of text, lists, and image layouts. Between them you build up a presentation of slides that will all thematically hang together as your presentation. You replace the dummy images with ones of your own (from the Photos app) and continue to add replace any dummy text with your own words.

In PowerPoint you tap the New Slide button to add additional slides. PowerPoint had more slide layouts in our test: 17 to Keynotes 12. But the slides didn’t have dummy images included, so they tend to look a little bare compared to Keynote. In Keynote you can see instantly how a presentation could look, and then replace the images with your own picture. But in PowerPoint you just get a general square shape where your photo will go. 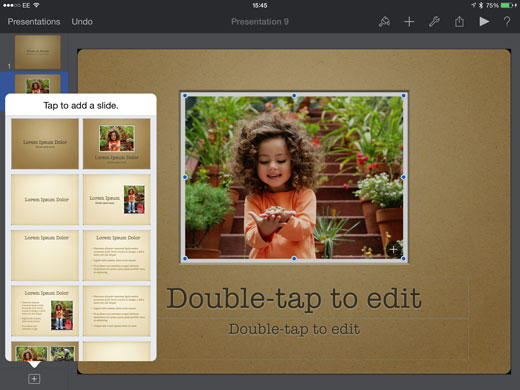 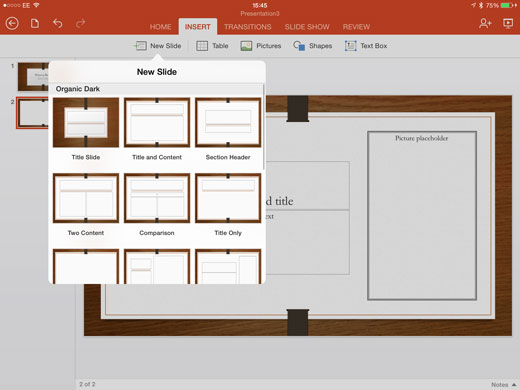 When it comes to navigating both apps, we found PowerPoint to make slightly more sense than Keynote. PowerPoint features regular menu items, such as Home, Insert and Transitions. And additional menu items (such as Photo or Shape) appears depending on the selected object.

Keynote, on the other hand, features Apple’s small iWork icons in the top-right of the display. These enable you to drill down into further options (again depending on what is selected).

The menu items in Keynote seem oddly obfuscated to us, which is a ongoing problem we have with iWork apps on the iPad in general, all of the many items require you to hunt around in the visual icons in the top-right, and it lacks some of the immediacy found in Microsoft Office for iPad.

But once you’ve got the hang of adding text, and images, it’s pretty easy in both apps to continue to add slides, change text and images. Using these basic features just about anybody can build up a basic presentation.

You can adjust the Style of an item by tapping it in Keynote and choosing the Format and Style option. The Style Options adjust based upon what you have selected (Text, Image and so on).

In PowerPoint you select the text and tap on Home, then tap on the Font menu. You can also choose from a range of pre-defined styles by tapping the Text Styles.

It’s possible in both apps to add video clips to a presentation. In PowerPoint you choose a slide, then click on Transitions > Transition Effect and choose a an option from 46 different transition. These are grouped into three different categories: Subtle, Exciting and Dynamic Content.

In Keynote you tap on a slide and choose Transition from the pop-up menu. Then choose from a list of 40 transitions. There is also an option called Magic Move that moves an object you select onto the next slide. Oddly, for Apple, the transition effects are provided as a simple list rather than a graphical demonstration. You can however get a quick preview of each option by tapping the Play button.

When you are finished with your transition you can press the Play button in the top right of each app. The presentation will begin to display on the screen, and tapping, or sliding, the iPad display moves to the next slide. If you have your iPad connected to an external display using the Apple HD Adapter, or an Apple TV then it will play on the external display.

Both PowerPoint and Keynote feature a fake laser pointer option, so if you tap and hold the display a laser pointer graphic appears. Both apps also enable you to scrawl around your presentation, to add circles, arrows and so on while you talk (these graphics are removed when you finish the presentation.

There’s really not much technically that’s different between PowerPoint and Keynote. There are other options, like Prezi, that have a very different approach to presentations. These display a single large image that zooms around from point to point. We mention Prezi because it’s worth noting that there are completely different styles of presentation around.

Finally we come back to a familiar issue with iWork versus Office, which is that of compatibility for each other’s files. You can send each presentation from one app to the other. Neither program particular enjoys opening each other’s files though, especially with regard to effects like transitions, transparency and tables or charts. With Word and Excel, this situation is clearly weighted in favour of Office, because it has the more widespread use. But we find many people like to use Keynote as their primary presentation tool of choice, so much depends on your office setup.