It’s not cheap for an iPad game. We should probably acknowledge that. But FTL: Faster Than Light is well worth the money, thanks to its gripping, merciless gameplay and rich depth of content. (This game incorporates the Advanced Edition that PC gamers will be familiar with.) Highly recommended.

Some say that video games have got easier since the 1980s. But they are only half-right.

The truth is that, afraid to put off the all-powerful casual gaming market, most games have got easier, incorporating gentle tutorial levels, omnivisible quest markers, achievements for trivial tasks and the ability to pay to progress. But that’s not the whole story; defiantly, and on a smaller scale, a parallel cult of masochistic difficulty has arisen in response to the general decline. Tell someone who just died on Dark Souls II – or just scored -0.6m on QWOP – that games are easier these days, and they might stop crying long enough to laugh at you.

FTL may just be iOS’s Dark Souls.* This strategy roguelike (and we will explain what that means in a moment) is so tough, so relentless in exploiting the smallest tactical error and so brilliantly cruel in the punishments it enacts, that many will be put off, or play (as your reviewer did for a while, to his shame) on Easy mode. But when you succeed it feels glorious. No cheap victories here. You don’t ‘finish’ this game, like someone time-serving their way to the conclusion of a book. You really do ‘beat’ it. Indeed, it’s one of the few cases where I could hear that phrase without wincing. 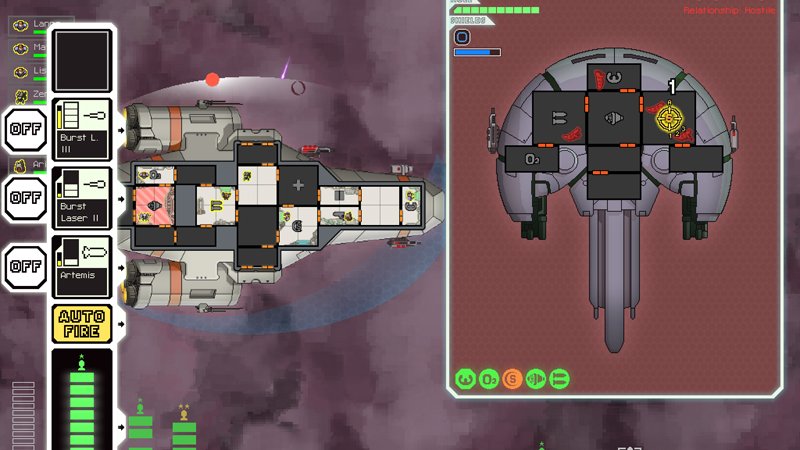 FTL is set in space, and puts you in command of a small vessel sailing through the galaxy, trying to courier vital military data to the Federation fleet while rebels give chase. Time is therefore crucial, but it’s effectively turn-based, at least on a macro level: each time you jump to a new point on the map the pursuing ships move forwards one step. (You also use up another unit of fuel, the dwindling supply of which can cause considerable stress.)

So you move across the map, trying to stay one step ahead of the rebels but also trying to collect enough resources as you go to improve your ship’s armament and equipment, and of course to stock up on fuel, as well as missiles, droid parts and running repairs. 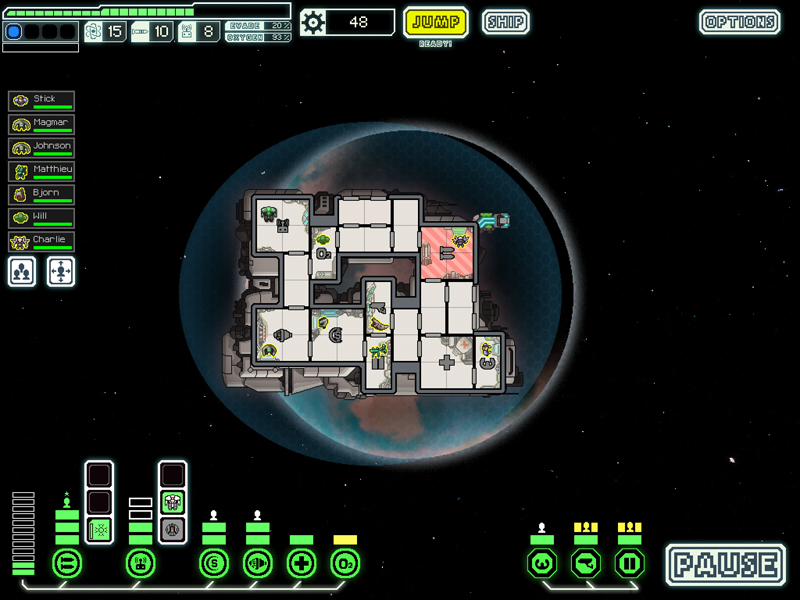 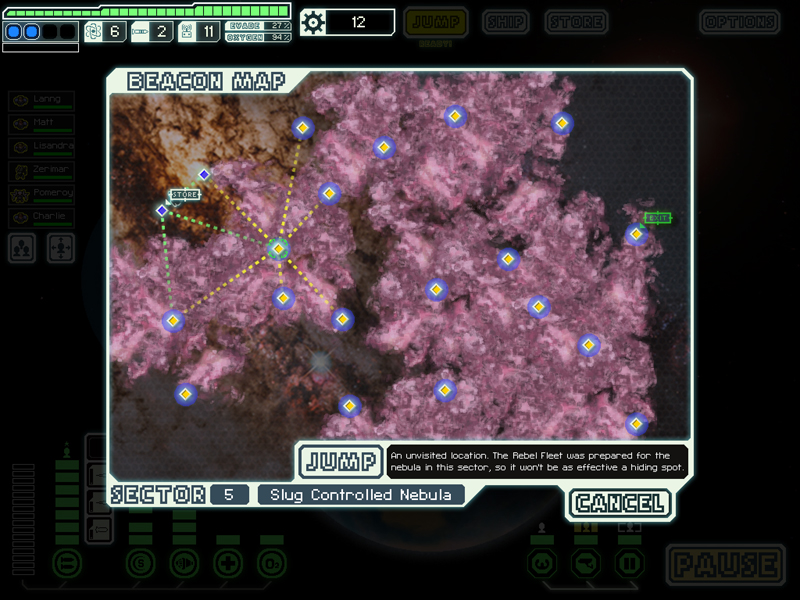 I said this was a roguelike, and it is – sort of. What that means, normally, is an RPG: roguelikes are mostly simple, randomly generated dungeon crawlers that don’t let you reload from a saved game after you die (something referred to as ‘permadeath’). There are no dungeons in FTL, but the map is randomly generated each time, so no two games are quite alike. (And unless you buy a cloning bay, any crew members who perish in combat are gone permanently – something that also applies to the entire ship if you suffer too much damage.)

Each new location on the map has the scope to be a friendly encounter – with Federation sympathisers, say, or potential new crew members. It could be a merchant willing to sell you new gear in return for some of the scrap you’ve picked up. More likely, it will be a battle with an enemy vessel.

Combat is one of the many areas where FTL shines, not least because of the high stakes and unbearable tension that permadeath creates. This part of the game runs in real time, although the ability to pause while issuing commands lends it some of the mannerisms, if none of the calmness, of turn-based strategy. You see the various compartments of your ship (and, if your sensors are sufficiently high-powered, those of your foe), complete with the little crew members working away at their control panels.

Each crew member has a name – randomly generated, but you can rename them if you want to re-enact Red Dwarf – and slowly gains skill points relevant to the job you give them. Already, I hope, you are imagining how much this game is going to hurt you. 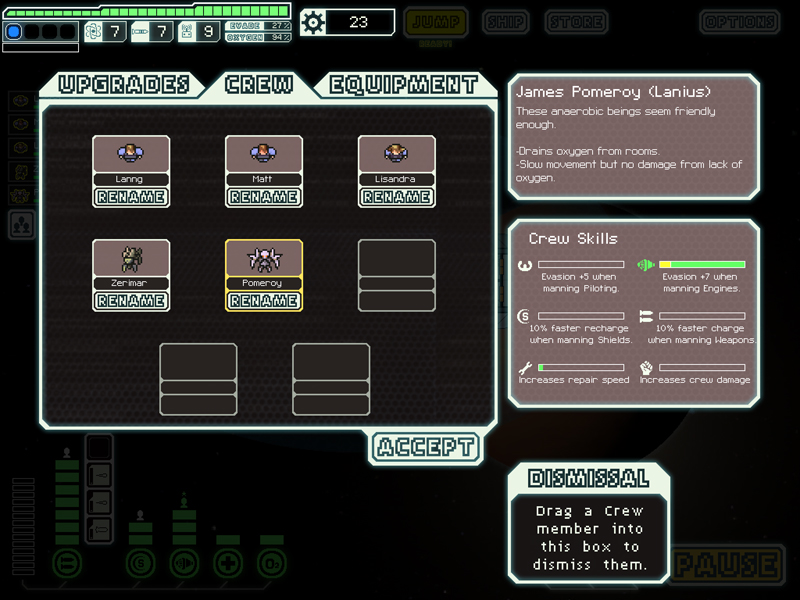 You choose which compartments your guns, droids and missiles attack; you choose which rooms your crew move to, in order to repel boarders, receive medical attention, put out fires, repair stricken systems or simply refocus your capabilities; and of course, in time-honoured Star Trek tradition, you control the ship’s overall power supply: “Divert all power to shields!” Well, you can do that within the limitations of how much you’ve upgraded each system, at least. 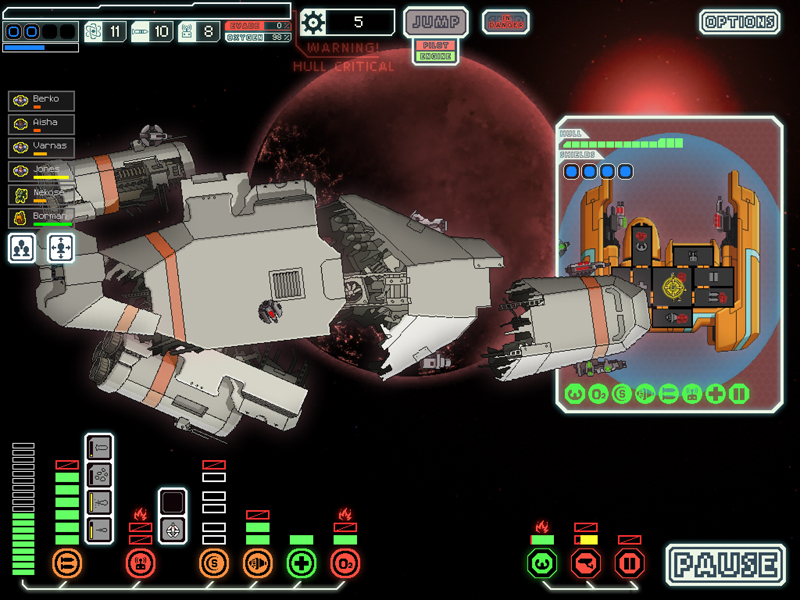 All of which adds up to a glorious whole, but one which doesn’t take it easy on you for a second. On Normal difficulty or above (and even for much of the time on Easy), you’re constantly fighting fires, metaphorically and occasionally literally. How can I get more fuel? How can I get enough scrap to afford a droid control system? How can I upgrade my shields? How can I get out of this sector alive? And how will I ever have a powerful enough ship to take down the enemy flagship?

FTL shares the grinding and upgrading aspects of an RPG, but in those games you can almost always hang around in the low-level areas until you’re happy with your gear and skills. Here, while the beginner is strongly advised to make the most of the early sectors (which contain easier bad guys), you’re always working against a countdown.

The graphics are extraordinarily evocative (if, for the most part, retro-flavoured), and the soundtrack plays its part too. And there’s a wonderful depth of stuff, ranging from weapons and droid systems, medical upgrades and exotic alien crew members to entire ship types to be unlocked. But the real guts of FTL comes down to the simplest of decisions – to investigate the abandoned space station or not; to buy the clone bay or the backup battery; to keep fighting or cut your losses and run. It would almost work as a text-based adventure. 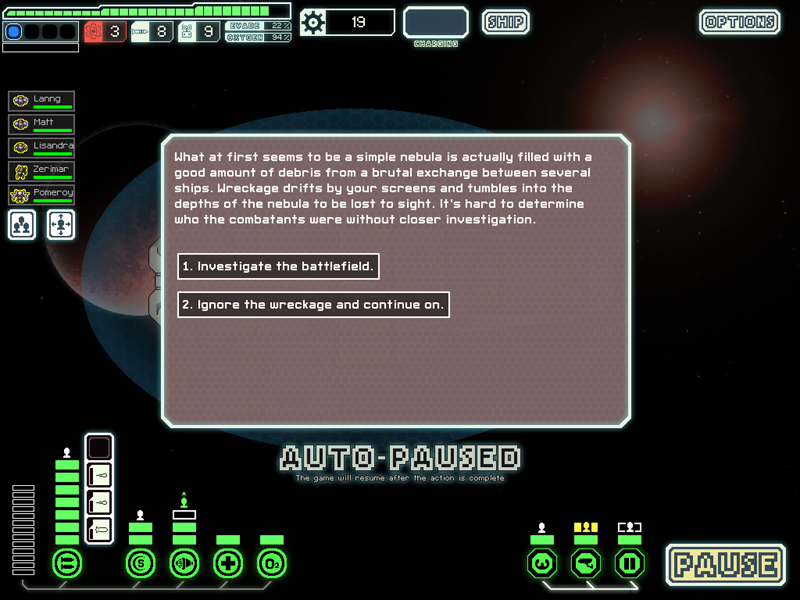 * Before you say it, no, Flappy Bird is not iOS’s Dark Souls. Flappy Bird represented difficulty through design limitations, rather than through malicious intent, and thus had far more in common with the unimaginatively hard arcade games of the golden age than with most of its contemporaries.