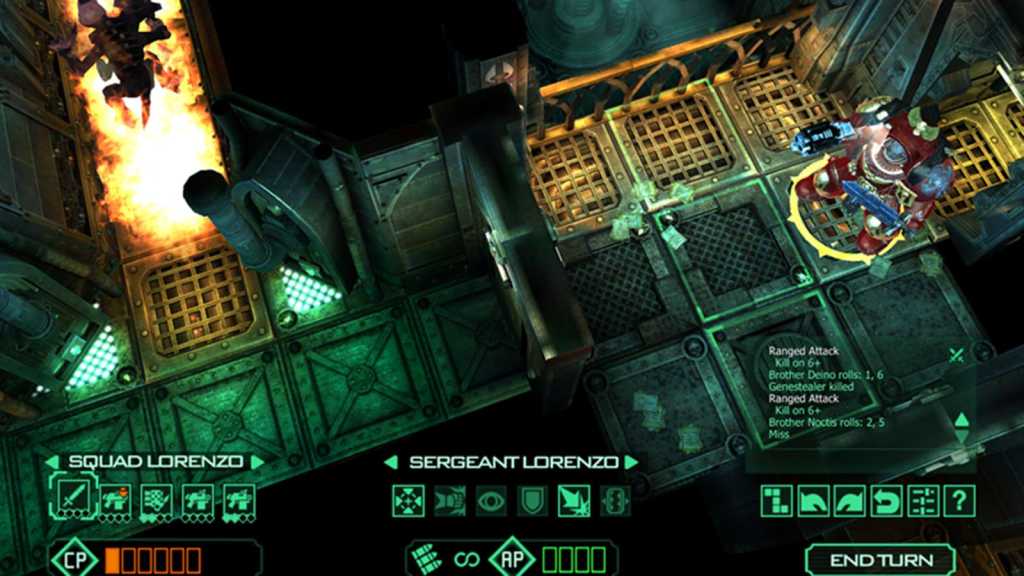 Space Hulk for iPad is a solidly crafted digital port of a classic board game, retaining the tension and much of the elegance of the original. It’s not perfect, but many of the complaints about the PC edition – the glitches, the unskippably slow animations – strike us as far less of an issue here. Recommended.

We review the Space Hulk game for the iPad, as Games Workshop’s masterpiece of turn-based tension arrives on iOS.

Nerds of a certain age are sure to have fond memories of Space Hulk, one of the great board games of the late 1980s. Set in the same grim, futuristic universe as Games Workshop’s Warhammer 40k tabletop wargame, Space Hulk is an altogether tighter experience: Warhammer’s grand, sprawling battles condensed into a claustrophobic system of ducts and corridors. It’s a game of rare simplicity, elegance and tension.

Space Hulk was originally for two players, although in the iOS version you can play against the computer. (There’s also local and online multiplayer, although the latter can involve a certain amount of tedious waiting around.) One player controls the humans: a handful of space marines in massive suits of armour, clanking around the derelict space ship of the game’s title and trying to accomplish their quest objectives. The other gets to play with a literally unlimited number of vicious, six-limbed aliens (named Genestealers because of their parasitical lifecycle – as you may come to observe, Space Hulk owes something of a cultural debt to the Alien films), and does their best to overwhelm the good (ish) guys and claw them to pieces.

Oddly enough, while the presentation of the concept is mostly excellent in this iOS port, the two sides appear to have been rendered to differing standards of graphical polish. The space marines are stunning, their juddering menace and baroque machismo captured perfectly. But the Genestealers seem more polygonal, somehow, and perish in a relatively limited number of gun-death animations that you could tire of (but probably won’t). 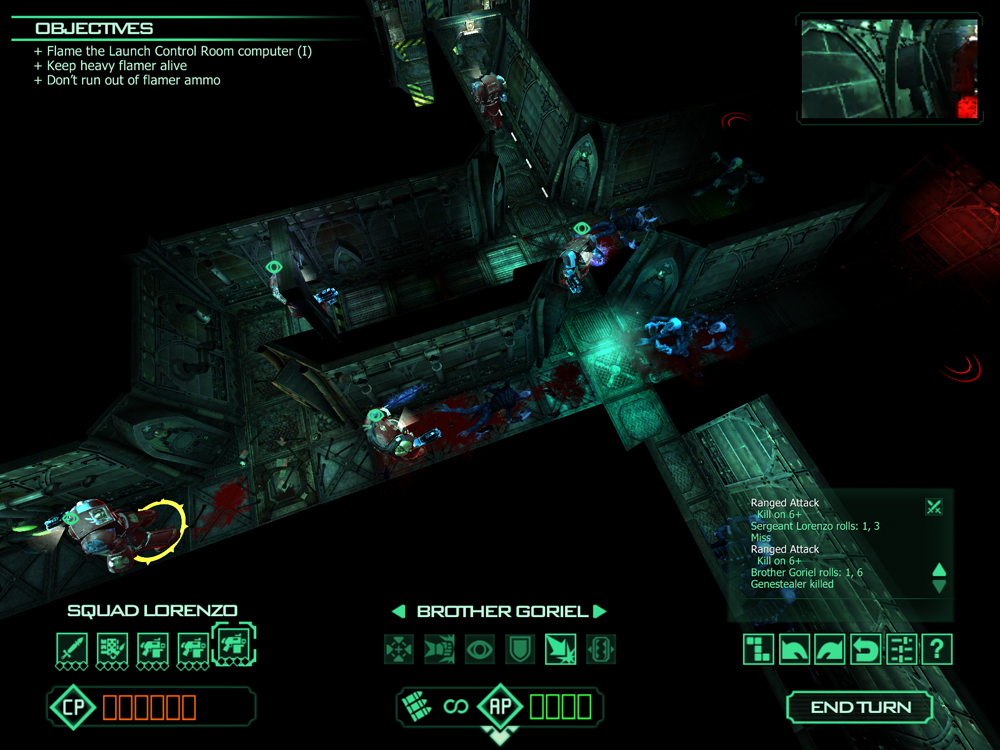 The “marine’s eye view” camera at the top right gives the action a marvellously claustrophobic flavour. Click to enlarge 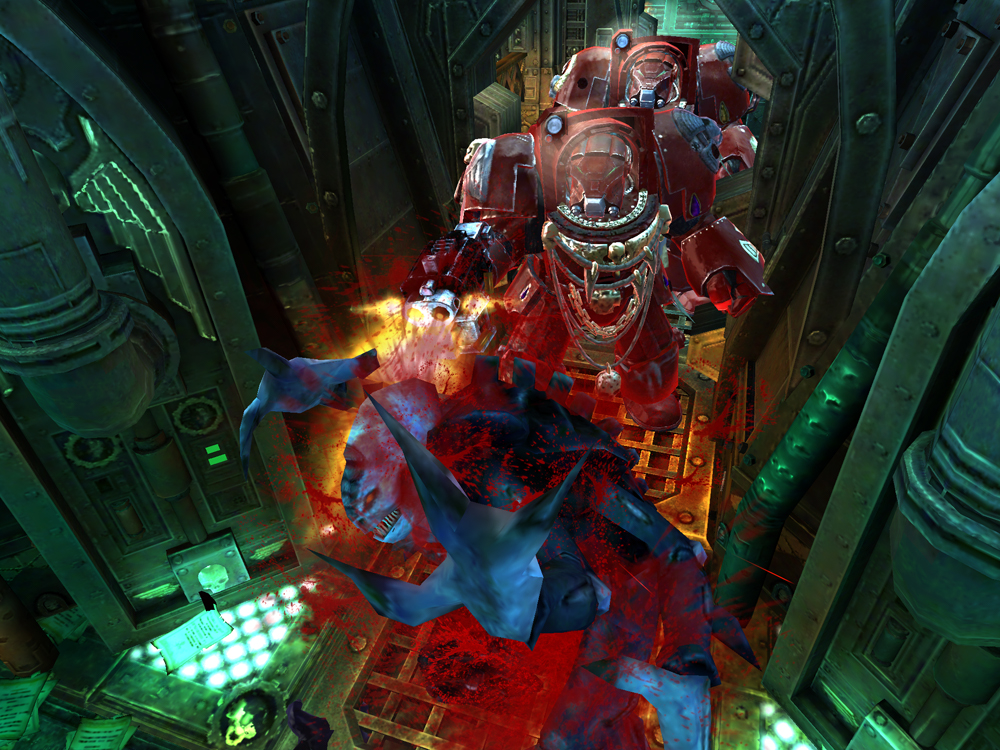 An experience like this, however, lives and dies by the gameplay, and we were delighted to find that it’s as nerve-shredding as ever, with all the original’s clever design touches replicated here. In one inspired gameplay mechanic, for instance, the Genestealers aren’t represented by individual sprites but by smoothly animated motion-detector ‘blips’ which may turn out (when a marine gets line of sight) to be one, two or three aliens, leaving the human player in constant doubt as to where the greatest threat will emerge. In turn, the marines are given a random number of bonus action points each turn, and this number is only revealed to the Genestealer player when they run out.

Perhaps the greatest source of stress, however, derives from a wonderful mechanic called overwatch. As well as spending a single action point (each marine gets four per turn, plus those communal bonus points mentioned previously) to move one space, turn, open a door or shoot at a Genestealer, space marines can spend two to ‘go into overwatch’, which is a mode in which they will fire reflexively in response to any visible movement. This can lead to heroic rearguards in which a single lucky human guns down half a dozen Genestealers as they pop their heads round the corner. Or, if the dice fall badly, the weapon may jam and leave him red-faced and doomed. Yikes!

I’ve just given away one of Space Hulk’s secrets, however: that quite a lot of the game is dependent on dice rolls. (It might even have been nice for the app to acknowledge this by showing the dice more visibly and dramatically, instead of listing the numbers as a small notification in the game’s log.) This is both blessing and curse, of course. It does make every game different, and means beginners always have a chance. And because you never know if an action will succeed or catastrophically fail, nothing can ever be taken for granted.

But it can also be frustrating, as in the situations where (to take a completely imaginary example) you spend all four of your action points shooting fruitlessly at the same infernal Genestealer and keep rolling low numbers. Indeed, the importance of luck in Space Hulk means that fans of the ‘Euro’ style of board game – low-luck, low-conflict, high-strategy – are unlikely to be won over. Still, you’ll generally find that sound strategy wins out in the end, and that luck evens itself out over the course of a game. 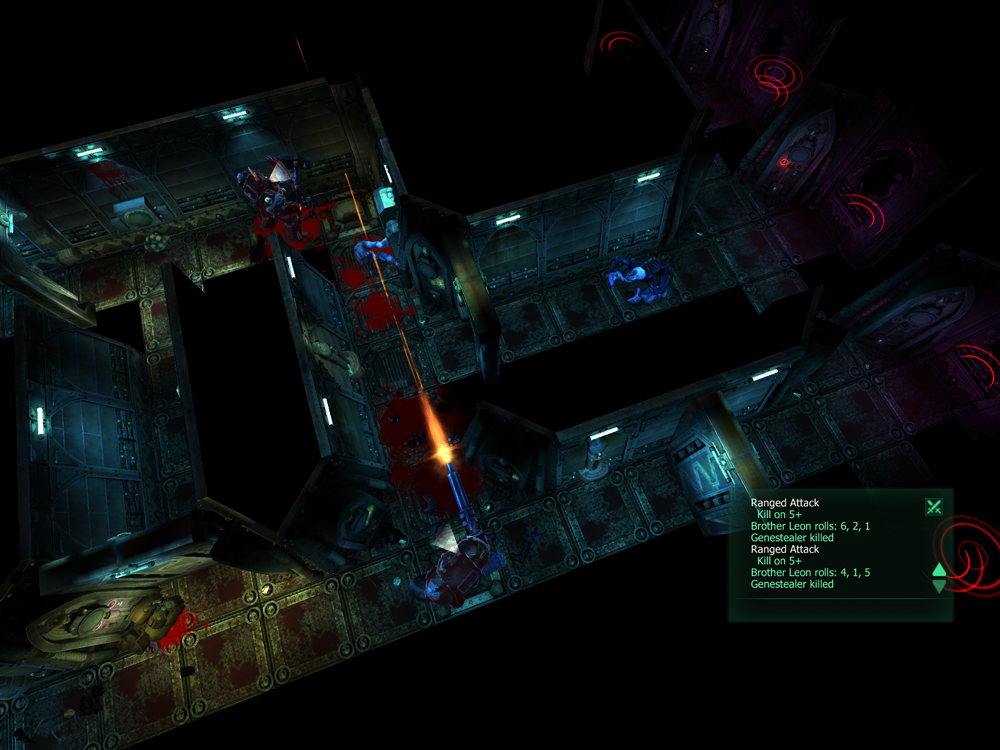 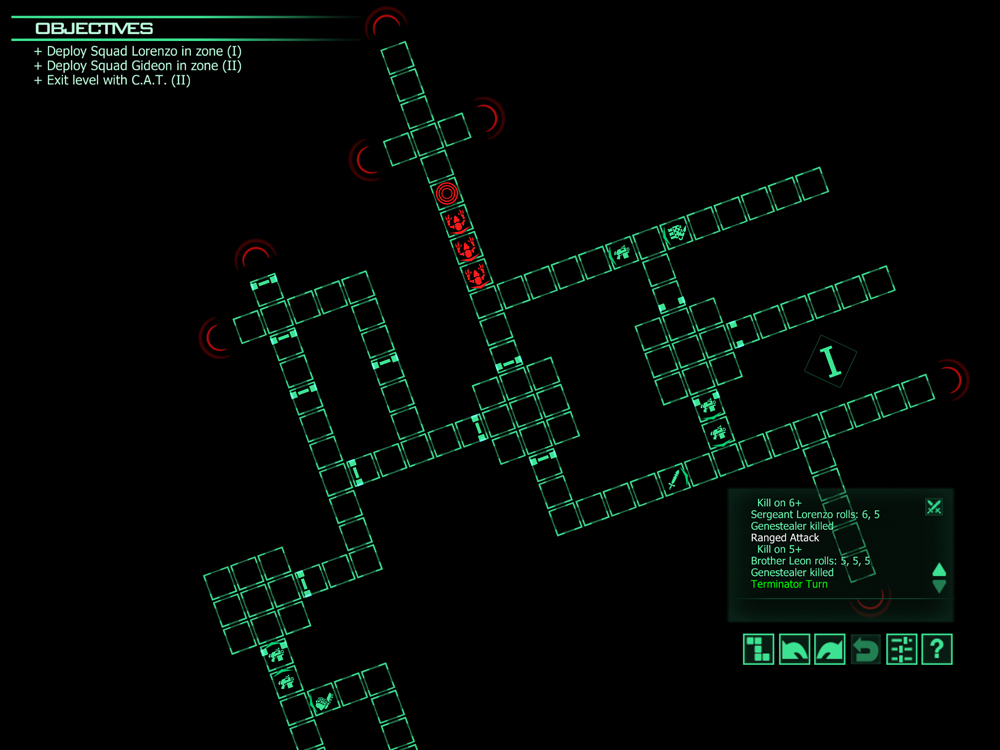 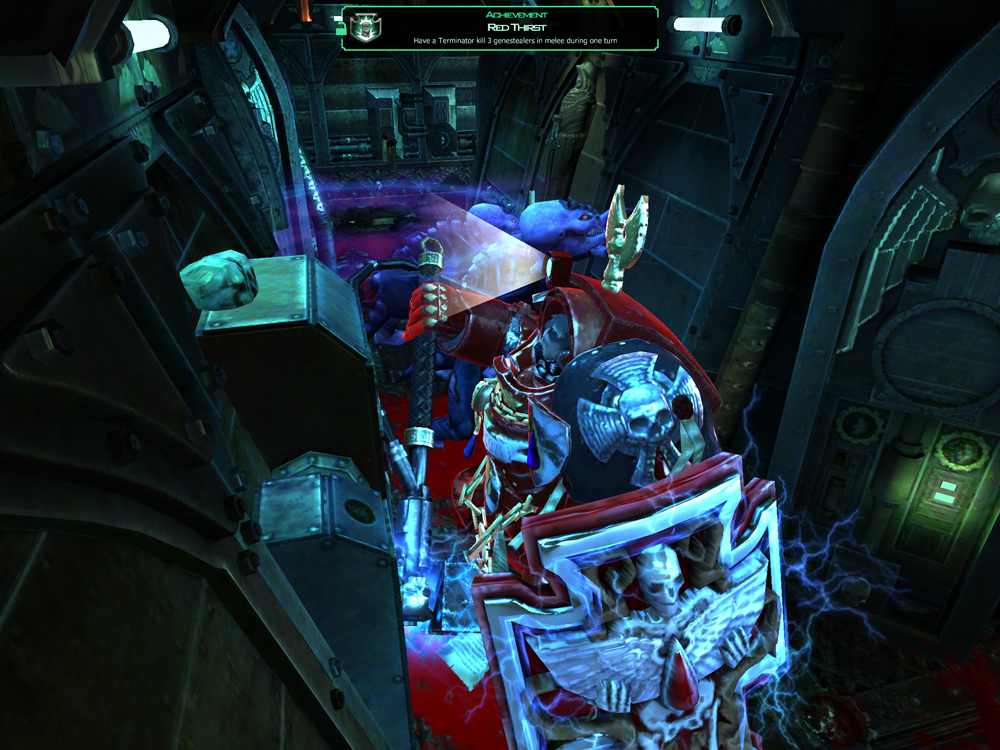 One other well-known weakness of Space Hulk is that playing as the Genestealers is less compelling than controlling the marines, with far less tactical depth and fewer options – which is presumably why the AI player always takes on that role. Physical board gamers have traditionally played each scenario twice, swapping sides at half time, and you may wish to do something similar when playing friends here.

Finally, it’s worth acknowledging that this isn’t a cheap game by iOS standards, with a starting price tag of £6.99 and further (relatively costly) in-app purchases to unlock additional missions and other DLC. But the bundled missions are a decent selection that should last you a fair time, and £6.99 is for me a fair representation of what a deep, beautifully realised game is worth.

Because, despite these minor reservations, as an emotional experience Space Hulk is hard to match. On top of the source material being superb, this is a strong adaptation for the iPad – not a flawless one, granted, but with many of the weaknesses of the PC edition expunged – and we’d happily recommend this as your next iOS board game purchase. 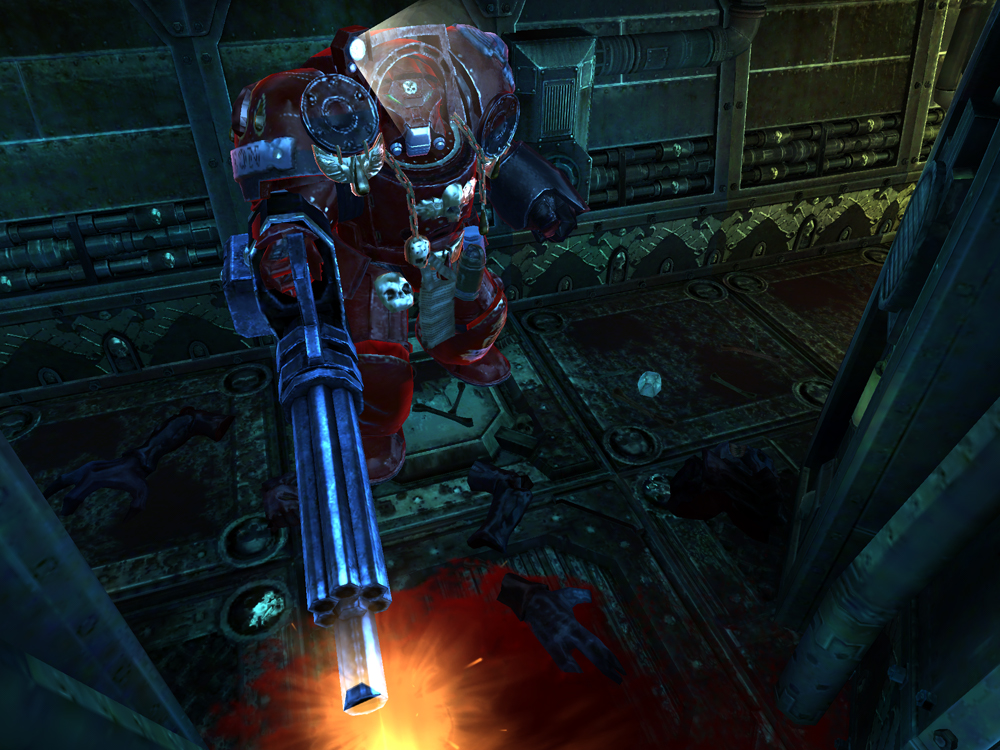 XCOM: The obvious, and some would say superior, alternative to Space Hulk. XCOM too has its roots in the gaming culture of several decades ago, as a remake of an early-90s PC game called X-COM, and blends turn-based ground missions with real-time base building, squad recruitment and tech research. Our reviewer praised its “tense, terrifying battles” and insisted that XCOM is well worth its high price tag.