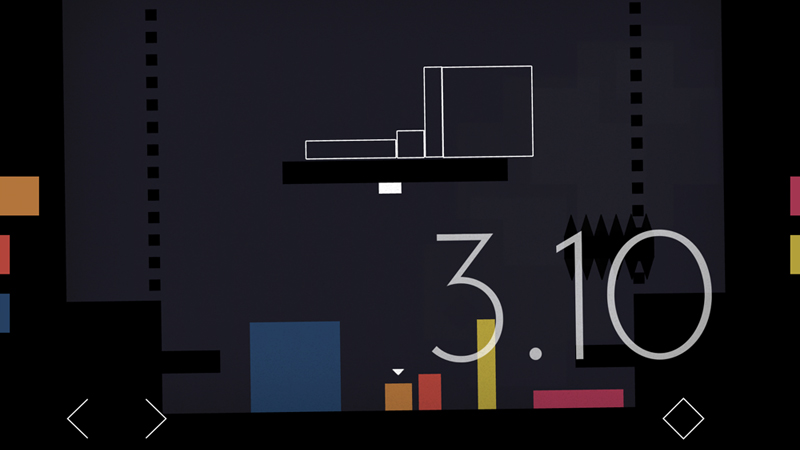 Thomas Was Alone is artful without graduating into a full-on art game, and an accomplished piece of game design: an attractive, thoughtful and original series of platforming puzzles with an unexpectedly satisfying (if light) story popping its head in from time to time. A fine iPad game.

Arty puzzle-platformer Thomas Was Alone is one of the great indie gaming successes of recent years, now brought to the iPad. Here’s our review.

This might not sound like a compliment, but it almost feels like Thomas Was Alone was made to win a bet: I bet you can’t create something emotionally compelling out of a collection of jumping rectangles. But it is a compliment, a reflection of how ambitious this game is. It’s hard to think of another game that’s so willing to impose limitations on itself, and then triumphantly transcend them.

You start off controlling Thomas, a small red rectangle who can move around and jump a bit. Your job, in traditional puzzle-platform style, is to get across a level strewn with obstacles, and reach the exit – an outline of Thomas’s shape. You do this via onscreen left and right controls, and a jump button. 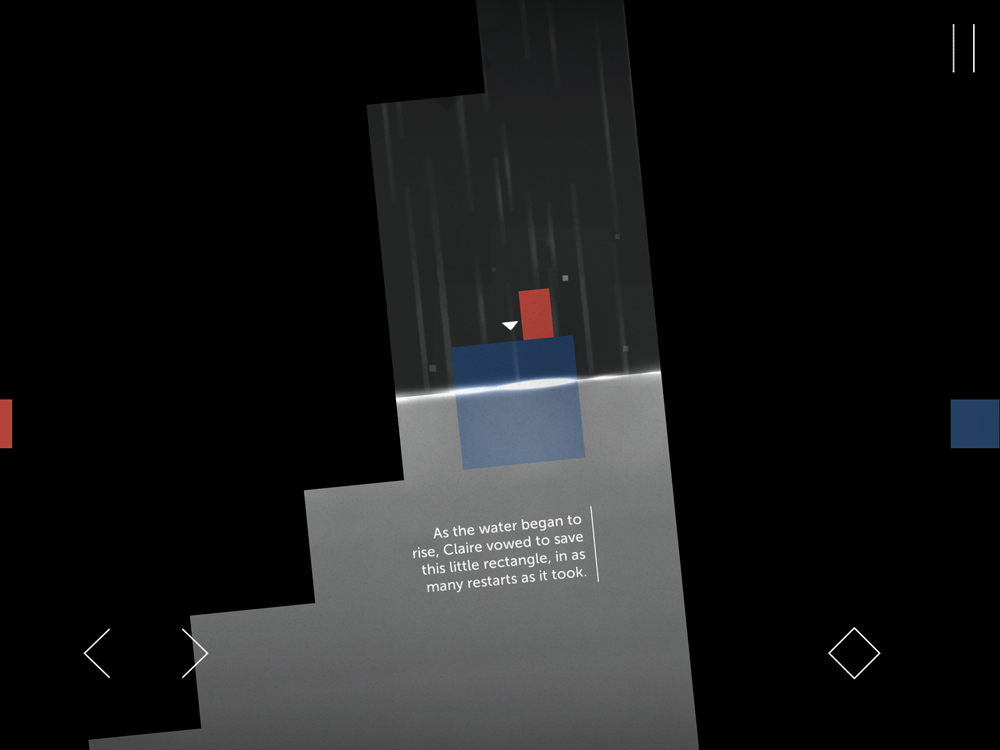 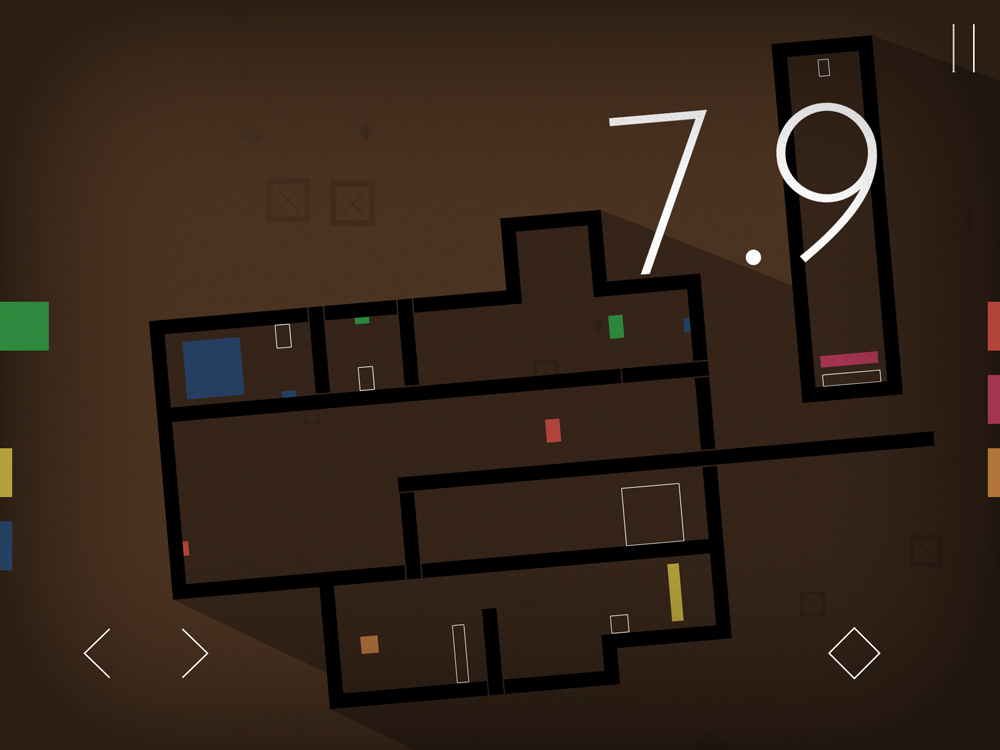 As you progress through the levels, more and more shapes are added, each of them a slightly different quadrilateral with slightly different capabilities: the first two are a squarer shape that can hardly jump any distance at all, and a long thin one who can jump miles. Later characters can float, reverse gravity and so on. The challenge is to combine the characters’ abilities in such a way that all of them are able to reach their respective exits. (You control one character at a time, swapping between them by tapping their colours on the side of the screen.)

So far, so mechanically satisfying; and it is certainly an accomplished piece of design, with a finely graded difficulty curve and neatly interacting physics effects. But TWA aims to be more than a dry series of puzzles. It’s a story, too – with characters, a plot (involving computer algorithms becoming sentient), relationships, emotions and motivations. All of it expressed via the medium of rectangles.

That this is achieved at all, given such childlike ingredients, is impressive. And while you shouldn’t expect Lawrence of Arabia, Thomas Was Alone does draw you into its little world. Mind you, it could be argued that the actual game – the characters you control, and their challenges and achievements – are very rarely the hook. Instead, the swelling soundtrack and jaunty voice-over (which won the TV comedian Danny Wallace a Bafta) do the narrative heavy lifting. They could almost be separated from the game and broadcast as a leftfield radio play.

Nevertheless, the overall effect is pleasing. There’s a strong sense of neatness in the way everything has been put together, in the way it’s all presented. It’s a very self-contained piece of work. The game knows exactly what it wants to achieve on its own terms. 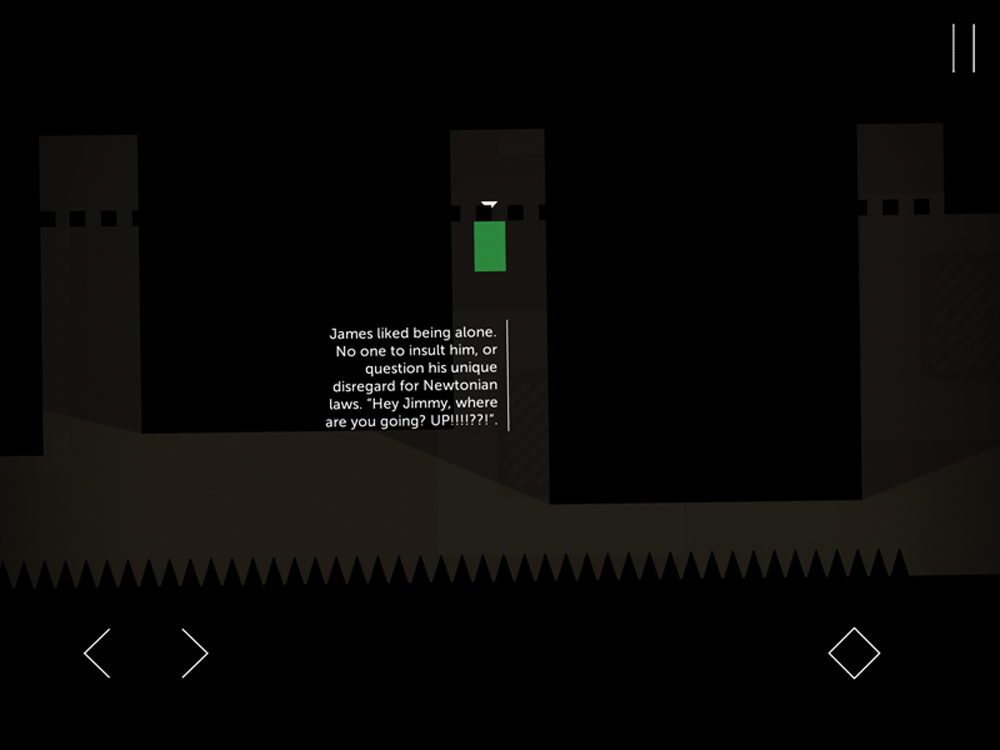 Limbo: Another puzzle-platformer with a strong sense of story and its own original look – although Limbo is far, far darker.

They Need To Be Fed ( 1 & 2): These games offer more straightforward platform action than Thomas Was Alone, but they’re pretty great. Also visually strong.