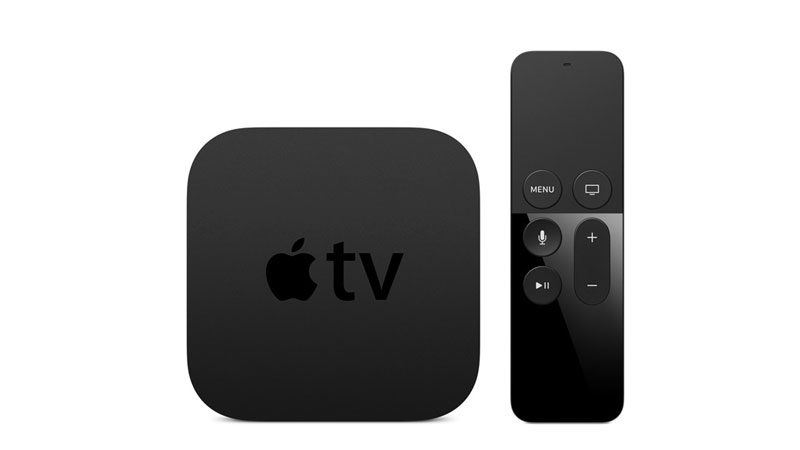 We had such high expectations for the 4G Apple TV that we have to admit to being a little disappointed with it on launch day. However, many of our main complaints seemed easy to rectify, and updates to tvOS and the Remote app have indeed resolved several significant niggles. Things still aren’t perfect – there’s far more potential here than is being fulfilled at present – but as of the tvOS 10, we’re prepared to raise our review score for the fourth-gen Apple TV from 3 to 4 stars out of 5.

The fourth-generation Apple TV, launched in 2015, includes an A8 processor (a significant upgrade from the A5 in the older Apple TV), a Siri-enabled remote, a revamped user interface and a brand new App Store for third-party applications and games. It’s an impressive package and there are some great new features, but there are also some annoyances.

When you first start up the new Apple TV, you’ll notice some similarities to the older Apple TV in terms of interface, but some significant differences. The older interface was quite cluttered with ‘channels’ that chances are you would never have watched (such as KORTV, Wall Street Journal Live, or MLB.TV Premium).

The only channel most people paid attention to on the old Apple TV was Netflix and when you first turn on the 4th generation Apple TV you might initially be concerned to see that Netflix is no longer one of the apps on the home screen, but fear not.

You populate your home screen with any apps you choose to download from the App Store, and Netflix is there (we do have some issues with this Netflix app, though, as you will see in the cons section).

Speaking of content, there is some good news: along with the likes of BBC iPlayer and Sky GO, Apple announced that Amazon Prime Video will be coming to the Apple TV with tvOS 11 due out later this year. However, the UK remains a long way behind the US when it comes to TV and movie streaming on the Apple TV.

We definitely prefer this new personalised layout. We always felt that the old home screen was cluttered, and until Apple made it possible to hide channels that didn’t interest you it was packed full of ‘channels’ that meant nothing to us. (Mind you, there were considerably more channels available in the US compared to the UK.) But that’s all in the past. 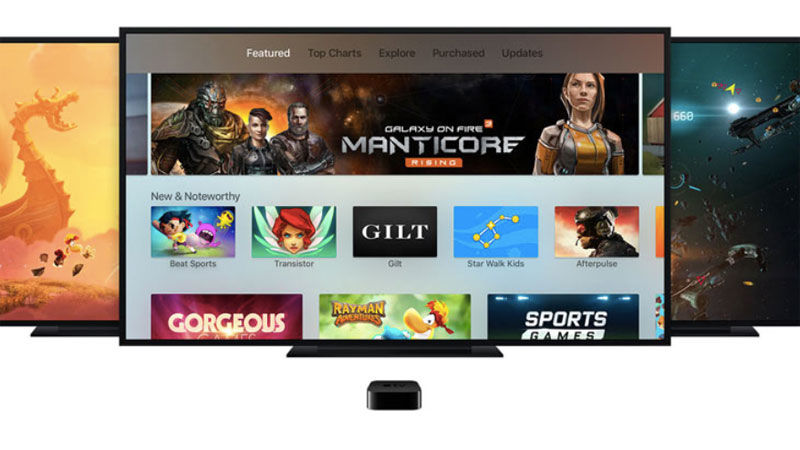 Now there are more than 1,000 apps on the tvOS App Store for you to choose from. Adding apps from the App Store is relatively easy, as long as you know what you’re looking for and don’t mind adding your iCloud password (more on that below).

Once you’ve downloaded the apps you want it’s easy to move app icons around on the TV interface, including placing the ones you use most frequently in the top row – previously Apple reserved this row for its own apps.

Apps in the top row also get to present their wares in the content preview space above. So if you click on Netflix you’ll see Netflix content in the preview box for a quick jump to what you want to watch.

We think you’ll enjoy the little touches that are typical of Apple interface design, like the way the screen dims after a while, leaving the app you’ve selected highlighted, or the impressive aerial view slideshows. 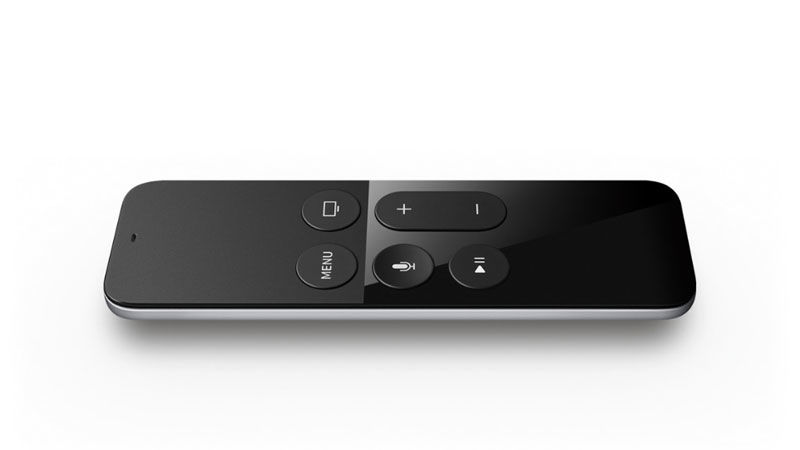 The Siri Remote does more than react to your voice. You can now control your TV volume using the Apple Remote, assuming you have a TV new enough to support HDMI-CEC (and the chances are, you do).

If your TV supports this standard you’ll be able to adjust the volume and even turn your TV on and off. To turn on your TV you need only to wake up your Apple TV.

This means there’s no fiddling around turning on the TV, then switching to the HDMI input that your Apple TV is plugged into. If your TV or receiver doesn’t support HDMI-CRC, all is not lost: you can still teach the Siri Remote to communicate via infrared.

Apparently Apple is focusing on making sure Siri understands the different pronunciation of actor names in different regions, so some countries are out of luck for now.

Yet there are some pretty nifty commands you can give to Siri such as statements like “What did he say?” or “Skip back 10 seconds”.

The battery in the Siri Remote should last for months, according to Apple. When you want to charge it you use the Lightning cable provided (or the one that came with your iPhone or iPad) and find a spare USB slot on your Mac or the power adaptor that came with your iOS device. Apple told us a full charge will take a couple of hours.

The things we hate about the new Apple TV

Apple’s Remote app, which you probably already have installed on your iPhone if you own an older Apple TV, wasn’t supported by the 4G Apple TV at launch, but  version 4.2.3 of Remote adds support for the 4G Apple TV.

This is great news. We’re pleased to hear, too that tvOS (see more on this below) also lets you sync with a Bluetooth keyboards – another thing that wasn’t possible at launch in 2015. But a number of our gripes remain.

The absolute worst thing about the Apple TV 4 is having to enter any search term or password. The onscreen keyboard is no longer a grid system; instead, the alphabet is laid out in one line, with capitals, lowercase and numbers on different screens. You have to swipe left and right, inevitably over-swiping until you want to cry.

Luckily there are a few shortcuts when using the onscreen keyboard, for example, you can press and hold a lowercase letter to get the capital letter, and there is a way to enter frequently used phrases, but it’s still incredibly frustrating to use. We wonder what possessed Apple to make this part of the experience so excruciating.

The only redeeming thing is that you can hopefully use Siri for most of the occasions where you would have typed in a search term – assuming you live in one of the countries for which Apple has released Siri for Apple TV. 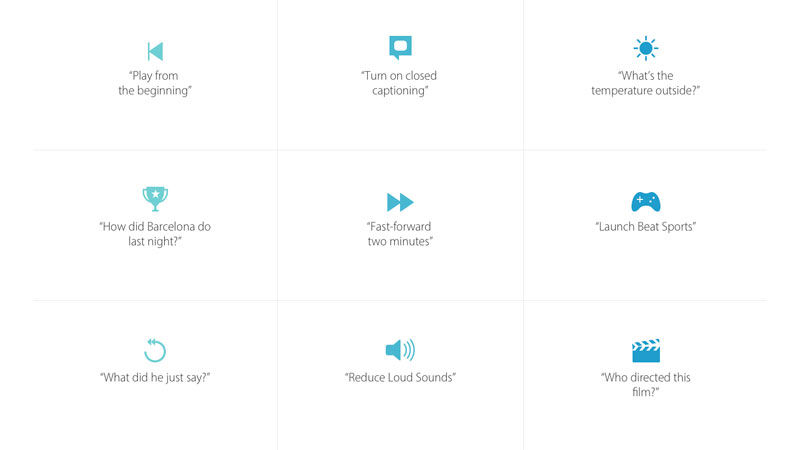 Siri didn’t work with Apple Music at launch, but that’s since been added, along with HomeKit support.

As we mentioned earlier, it’s great that the Netflix app is available on the App Store, and we like the fact that we can now pop it in the top row and see various Netflix shows along the bar at the top of the Home Screen.

There are more disappointments with the new Apple TV. If you were hoping to grab a few controllers for multiplayer gaming on the new new device you’ll be disappointed to learn that it only supports two Bluetooth controllers at a time.

You can also only use one Siri Remote per Apple TV, so multiplayer gaming using two Siri Remotes is also impossible (mind you, at £65 a pop you’ll probably be looking for cheaper alternatives anyway – by contrast the SteelSeries Nimbus Wireless Gaming Controller costs £39.95). 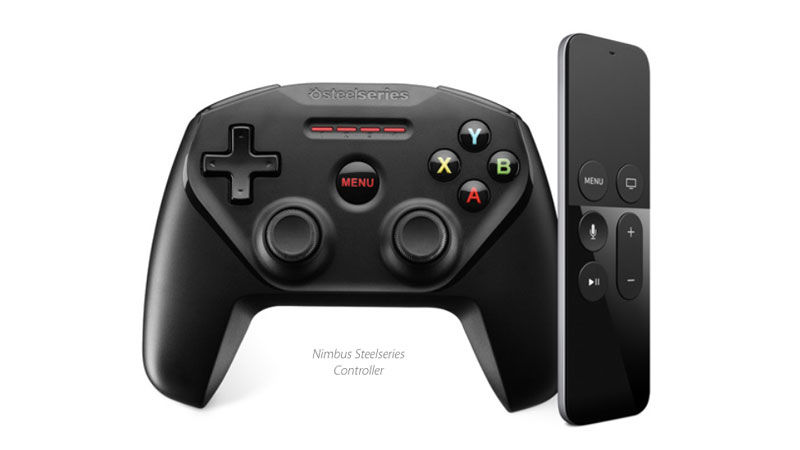 Speaking of gaming… the Siri Remote isn’t great on that front. It’s light and awkward to use and the trackpad is too small to be useful – it’s a quarter of the size of the touch screen on the iPhone, after all. So we anticipate that serious gamers will invest in a joystick.

The App Store is both a benefit and an annoyance of the new Apple TV.

Want to find an app that isn’t presented in the provided categories? You have to search for it typing its name on the frustrating-to-use keypad.

Now that the apps are a little more discoverable, you may be included to fill your Home Screen up with all sorts of games and entertainment. While Apple didn’t initially provide a way for users to organise installed apps, it introduced iOS-esque folders to the Apple TV with tvOS 9.2.

What if your shopping escapades on the tvOS App Store fill up all the storage of your 32GB or 64GB Apple TV? Unfortunately it’s not easy to find out how much storage you have available. The only way to find out is to go to Settings > General > Manage Storage (under Usage) an add it up yourself (you can delete things pretty easily from this screen).

Finally, we have to mention the price here. At £139 for the 32GB model and £179 for the 64GB model there is no escaping the fact that this is an expensive device in terms of what is available from the competition right now.

However, it depends on how you look at it: were you to compare the price of the Apple TV with that of the PlayStation or Xbox, the Apple TV is significantly cheaper, and offers apps that you won’t find on those devices. And whereas the games on those devices are obviously more impressive, they are considerably more expensive too.

You can buy the Apple TV from the Apple Store here or from John Lewis, Currys and more third-party resellers.

The Apple TV is based on the tvOS operating system. Like iOS and Mac OS, this can be updated for free whenever Apple releases a new version, provided your hardware is rated as compatible.

In this way you’ll gain access to additional features and interface tweaks beyond what was offered when you first bought the device; it will also patch bugs and vulnerabilities that have been discovered.

Want some of that action? Then read  How to update tvOS on your Apple TV.