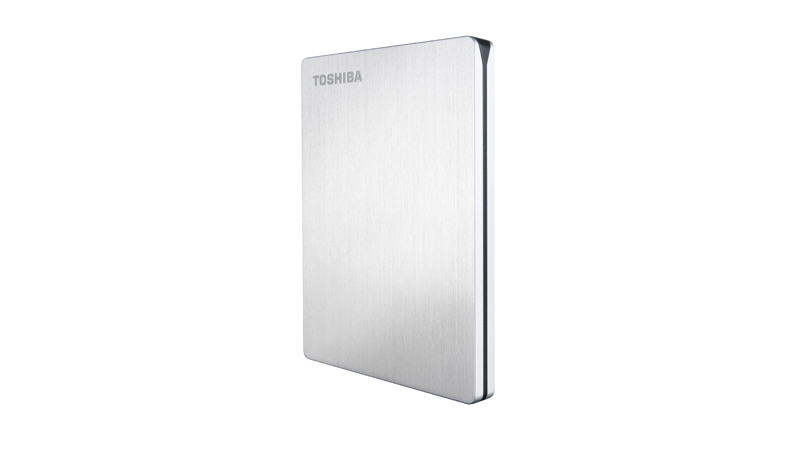 The Toshiba STOR.E Slim for Mac is relatively tough and affordable. It’s generously sized internally at 1000 GB, while modestly sized externally, taking very little space in your bag or pocket. Performance is as good as any notebook hard disk.

Toshiba’s STOR.E Slim for Mac is a little portable USB 3.0 hard drive that packs plenty of storage capacity. Inside this smart metal-skinned drive, slimmer than a pack of playing cards, is a 1 TB disk, ready formatted in HFS+ for use in OS X.

This must be the physically smallest drive of this capacity, a USB 3.0-connected device that foregoes the usual separate SATA-to-USB circuit board inside to enable the smaller form.

Build quality is good, while the metal finish belies the low overall weight of just 150 g. Rather than the milled-from-solid approach that some high-quality drives takes, the STOR.E Slim for Mac has a thin aluminium skin that gives a more mass-produced feel to it. But nonetheless the metal top and bottom should help it shrug off casual scratches well.

In use, it’s also very quiet despite the spinning disk inside. Whether idling or actively reading and writing data, we found the STOR.E Slim blissfully low in noise.

Thanks to a USB 3.0 interface that doesn’t slow the intrinsic speed of the disk within, the STOR.E performed as well as an internally mounted 2.5in hard disk.

For a fresh, unused and empty drive, we saw average sequential transfer speeds of 115 MB/s for both reads and writes. Looking at the small-file results for data sized between 4 kB and 1024 kB, sequential reads and writes now averaged 86 and 79 MB/s respectively.

Also included with the drive is Pogoplug software, costing £18, designed to allow outside network access to the drive while its connected to your computer. The Pogoplug package also includes 10 GB of Pogoplug’s own server space for free.