The new 21.5-inch budget Apple iMac is every bit as good in its quality of design and standard of build as the more expensive quad-core iMac range. To reach the lower price, economies are made primarily in the processor and storage configurations. And while the drop in processor speed will be of little impact in many daily computing tasks, the loss of the flash drive found in the comparable MacBook Air translates into a computer that feels much more sluggish to use. Since the storage drive is not an officially upgradable component after purchase, we would recommend specifying at least the Fusion Drive model from the outset. And if you have the £1099 budget for this model, do not be tempted to plump instead for the cheaper 21.5in iMac with faster 2.7 GHz Intel Core i5 quad-core processor – that system will be similarly hamstrung by the slow hard disk that comes as standard with its £1049 price. But configure the new budget iMac with the speed-restoring Fusion Drive and you’ll experience the snappiness that’s now effectively standard across nearly all modern Apple Macs.

The new 21.5-inch iMac released in June this year is the second revision of the new-style all-in-one desktop PC with the vanishingly thin screen edge.

First launched in late 2012 with an Intel Core i5 running at 2.7 GHz (from the series codenamed Ivy Bridge), the slim-screen 21.5-inch iMac then received an internal upgrade to a Haswell-generation 2.9 GHz Intel Core i3 in autumn of 2013.

This new entry-level model for 2014 also takes a Haswell processor but with the much lower clock speed of just 1.4 GHz. Crucially though it also forsakes its solid-state storage drive, and instead takes a slow laptop hard disk, all enabling a price drop that sees a starting point of just £899.

We tested not the most basic version with 500 GB notebook hard drive, but one available as a configure to order (CTO) option with 1 TB Fusion Drive. This should side-step the main performance issue with the new model – not the reduction in processor power, but the loss of the best storage drive in the business, now that Apple fits PCIe-attached flash drives across most of its Mac line.

Trading up to this Fusion Drive model is not cheap though, adding £200 to the price for a total of £1099.

Read: review of the entry-level 21.5-inch iMac without Fusion Drive

The new 1.4 GHz iMac represents something of a departure in choice of processor. Since the eye-catching redesign of late 2012 that introduced the new one-piece thin-edge display with low-reflection coating, all Apple iMacs up until this model had been fitted with quad-core CPUs running at closer to 3 GHz. In fact the 1.4 GHz processor used here is the same chip that powers Apple’s current MacBook Air to such good effect, enabling very low power consumption and minimal heat output.

In our test of raw processor performance using Geekbench 3, the new iMac unsurprisongly returned similar results as those Mid-2014 MacBook Air models – fractionally faster though with 2838 points for a single core and 5464 points for multi-core operation; the 11-inch MacBook Air scored 2762 and 5392 points respectively, giving the iMac an insignificant advantage of around 2 percent.

In the Cinebench R11.5 test of single- and multi-core performance, the 2014 iMac scored the same as the MacBook Air as well, returning 1.13 and 2.58 points respectively. Turning to the more recent Cinebench R15 benchmark, we saw 98 and 240 points for the two sub tests, against 97 and 236 points for the 11-inch MBA. So a tiny increment difference in the benchmark results, perhaps reflecting more optiomal conditions for the processor in a desktop machine, where power is more plentiful and cooling is easier. A new iMac may be set to launch this summer. Read about the 2015 iMac release date here, plus there’s a new Retina iMac that’s even cheaper, read our preview here: 3.3GHz Retina iMac review. 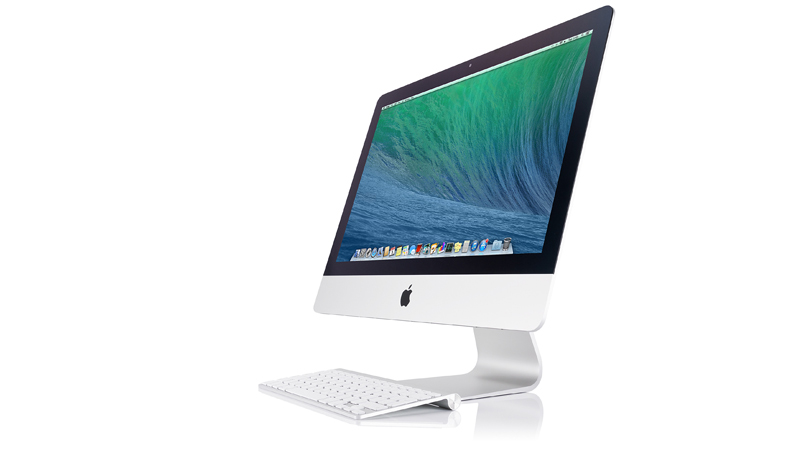 When Apple last revised the iMac range in September 2013, the upgrade to Haswell chips also saw the removal of a separate nVidia graphics processor, to rely on the increasingly capable Intel integrated graphics built into the main CPU.

Also known as Iris Pro, the Intel HD Graphics 5200 graphics processor was the same as that fitted to the entry-level 15-inch MacBook Pro with Retina display. For gameplay, this was indeed a step up from the discrete nVidia GeForce 650M before it.

With the new low-price iMac we find graphics performance has inevitably been reduced again, now powered by an Intel HD Graphics 5000 solution as you’d find in all current MacBook Air models.

But while the OpenGL section of Cinebench R11.5 showed the same 22 fps graphics capability for both laptop and desktop machines, the entry-level iMac pulled ahead slightly in Cinebench R15’s graphics test – 21.7 fps against the MacBook Air’s 18.5 fps.

Turning to some real games, we found our first choice would not comfortably run on this iMac. Tomb Raider (2013, Feral Interactive) warned us when we first tried to run the game that the computer did not meet minimum requirements for the game. And sure enough, even running at reduced ‘1280 x 960’-pixel resolution and Low detail we saw a just-playable average framerate of 29 fps. (1280 x 720 was strangely absent as the logical option for this 16:9 aspect-ratio screen, although the game rendered on-screen correctly to fill the widescreen display.)

Batman Arkham City also played with similarly borderline framerates. Set to the proffered 1280 x 960 resolution and the game’s Medium detail setting, it ran at an average framerate of 29 fps. That’s around the same performance as we saw on both 11- and 13-inch MacBook Air models from mid-2014.

Apart from the slow hard disk, the new budget iMac can be seen as a MacBook Air that’s taken root to the desk, and one fitted with a much larger screen.

And what a screen it is. It may lack the Retina level of ultra-sharp pixel density that we enjoy from iPhone, iPad and the MacBook Pro, settling instead at 102 ppi on its 1920 x 1080 full-HD panel. But thanks to a similar single-glazed construction process as the latter Retina MacBooks, it’s mercifully low in annoying screen reflections.

As an IPS panel, once only the preserve of deep-pocketed graphics professionals, it also impressed with vivid life-like colour and superb all-round viewability from any angle.

We put it through our lab display tests with a Datacolor Spyder4Elite to put numbers to the great image quality we were seeing. Crucially, it hit the required 100 percent coverage figure of the industry-standard sRGB colour gamut. The more demanding Adobe RGB gamut was also covered well, up to 80 percent.

Colour calibration out of the box was superb, with pre- and post-calibration screen images looking very close when judged by eye. And colour accuracy was another forté, showing an average Delta-E deviation figure from 48 swatches of just 1.79. Remarkably, the highest single-colour deviation (1F, teal) was itself at a relatively low value of 4.83.

We did notice some colour banding occasionally though, seen as bands rather than a smooth gradient in the drop shadow of focused windows over plain-colour desktop backgrounds.

The model we tested included two drives, combined together in software by OS X’s Core Storage technology to create what Apple calls a Fusion Drive. Here this comprised a 128 GB SanDisk SSD attached by PCIe, and a 1 TB Hitachi Travelstar 5K1000 SATA disk.

To get an idea of how the new budget iMac would perform with both its Fusion Drive and with a standard hard drive only, we partitioned the internal drive and cloned the entire operating system to the second partition. The first original partition benefitted from the flash-drive acceleration, while the second partition worked like a typical hard disk-only system.

In the Windows world especially, boot times are bandied around as sign of computer performance. For Windows PCs that need frequent rebooting we can see why needless waiting here is frustrating, even if it’s almost a non-issue for Apple Mac computers: they recover from sleep mode perfectly every time, and system updates are fewer and less likely to require a complete restart.

Nonetheless, we compared the boot time between standard and Fusion Drive setups. With just the hard disk, OS X took 1 min 13 sec to start up; with the Fusion Drive, only 11 seconds.

A typical daily task may be to duplicate a large file on the computer. We found a large .app application and compressed it to .zip to create a single homogeneous file, final size around 12 GB (12,271,495,421 bytes). With a standard disk this duplicate-in-place process took 5 min 20 sec, while with the Fusion Drive setup it took 57 seconds.

Conversely, you could look at the increased time you would be left waiting on a hard disk-based iMac to carry out our chosen daily chores, compared to one with a flash/disk hybrid setup: 228 percent longer to unzip a large directory of files; 561 percent longer to duplicate a large file; and 660 percent longer to wait for the system to boot.

These latencies in purely disk-based computing also reflect the tardiness we felt in the core user experience, in tasks such as launching applications, and opening and saving files. 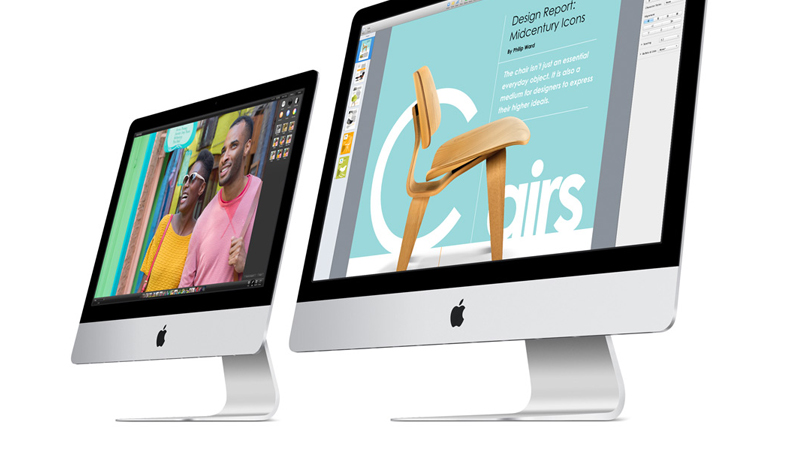 Other features in the new iMac

The Wi-Fi system in the new 2014 budget iMac appears to be the same as used in last year’s iMac upgrade, and is therefore capable of connecting to the latest 802.11ac routers. Unlike that found in the MacBook Air though, this wireless configuration is the superior three-stream MIMO (in other words, with three antennae) rather than just two, so is capable of better wireless range and throughput than the MacBook Air.

Power consumption of the budget iMac is very low for a complete all-in-one desktop PC. At its peak – with screen brightness set to 100 percent, and graphics and CPU under full load – the iMac drew up to 70 watt of power. At its lowest idle level though – with screen set to a more comfortable 120 cd/m^2 and no user processes active – it consumed just 19 W.

At no time under testing did the iMac get remotely warm, and we never heard any cooling fan. Nor in fact did we hear the sound of the spinning hard disk within. By putting our ear to the back plane we could barely hear a whisper that could have been disk or fan. But this iMac is effectively silent, one of the positive attributes of most Apple Macs that make them so easy to live with.

As noted already, the 2014 budget iMac has much in common with this year’s revised MacBook Air range in internal specification, although we noted one other subtle difference, in the audio sub-system.

While the latter 13-inch MacBook Air can play up to 16-bit 96 kHz digital audio, the new iMac has 24-bit 48 kHz capability. That still leaves both types of computer short of true high-resolution 24/96 playback, but both are also specified slightly higher than the old 16/44.1 standard used by CD.

There is no audio input included with this iMac, but an external USB microphone or A-D converter will handle such needs.

Update: an external audio input is available using the 3.5 mm headphone port, which allows an in-line microphone to be used from headset earphones and headphones.

Additionally, with headphones plugged in the audio system is capable of 24/96 operation, as qualified by OS X’s Audio MIDI Setup application.