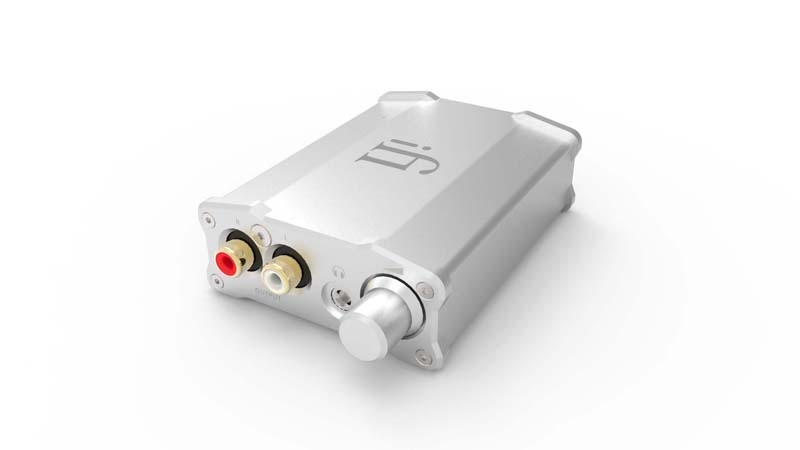 The iFi nano iDSD serves as a great upgrade to the headphone sound of MacBooks, iPhones and iPads. It’s superbly made and brings a major upgrade to CD-level sound, as well as open up the many possibilities for real high-resolution music that are now available from computers and mobile devices.

Headphones and earphones have had a surprising explosion in popularity, inspiring people to find new ways to enjoy their personal audio. Perhaps less time and money goes into the link in the chain immediately before the ’phones though. We usually plug straight into a smartphone, laptop or tablet, and there’s typically less scope for improving the headphone output from your music system.

While it may be true that the electronics that make up the average headphone stage on modern portable devices is rarely terrible, even the best in town can benefit from an upgrade, if you’ve got the ears and the money.

The nano iDSD from iFi Audio is one such accessory, a portable battery-powered headphone amplifier with its own digital-to-analogue convertor (DAC).

iFi Audio is a sub-brand of British hi-fi manufacturer Abingdon Music Research (AMR), and we tried a sample kindly loaned to us by UK high-end audio distributor Select Audio. 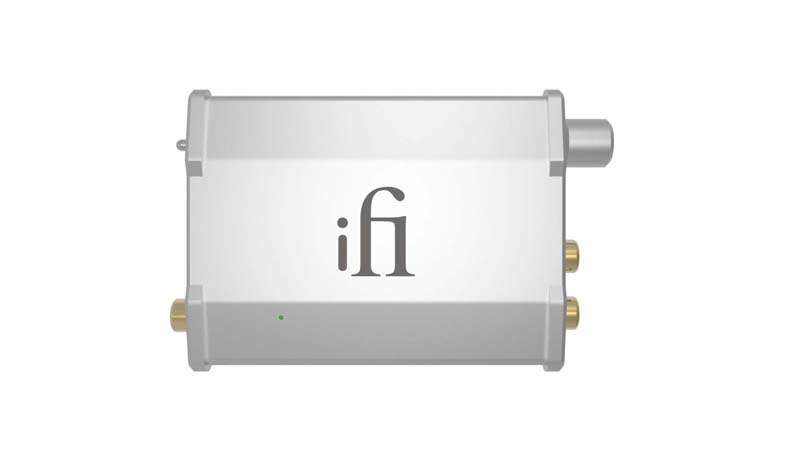 The nano iDSD measures just 87 x 68 mm, and is 28 mm high in its all-metal case. But it’s quite capable of decoding the highest-quality audio formats currently available.

There is but one input, a USB 3.0 port on one end, through which it can accept the digital output from a laptop, a desktop PC, and even a smartphone or tablet with the right lead.

Inside the tough and very solid-feeling extruded aluminium case is a Burr Brown/TI D-A convertor that can take on traditional PCM digital audio, up to 32-bit and 384 kHz sample frequency. Most high-resolution PCM audio files are set at 24/96 or 24/192, and this lies right within the nano iDSD’s comfort zone.

The full 32/384 files are very rare outside some audiophile mastering studios, where it was given the name DXD, designed as a more editable surrogate for the format that gets many computer audiophiles really excited – Direct Stream Digital.

DSD was the late ‘90s result of another co-operative project between Philips and Sony, inventors of the Compact Disc. As the CD format neared the end of its patentable life, they created a higher-quality replacement they called Super Audio CD, or SACD.

After around eight years of production between 1999 and 2007, and with most consumers satiasfied by the convenience and zero-cost price of MP3, the SACD format was nominally abandoned by its inventors. But in the last few years the music archived to the SACD format is now being being unlocked into digital files that can be played on computers and media servers, giving the high-end format a new lease of life. And the iFi Audio nano iDSD will play all such DSD music.

In fact, it’s equipped to play a more recent upgrade of the original DSD64 format (from ‘64x the sample frequency of CD’), up to DSD128 and even the quad-rate DSD256. To be clear though, these latter two derivations are extremely rare from anywhere but a few audiphile labels. 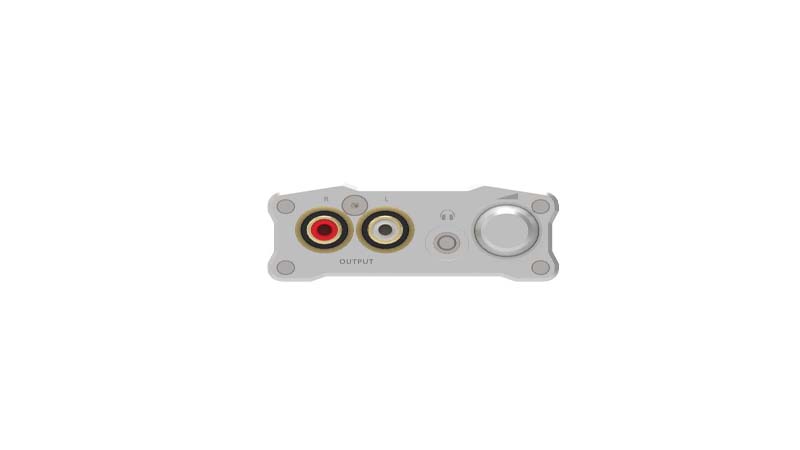 OS X has great support of high-resolution audio built into its Core Audio framework, and consequently there’s no need to install any proprietary drivers to enable operation even at the highest sample frequencies. We had some initial teething problems with connection to recent MacBooks, but this was solved with a firmware update to the unit. Currently sold models should be up-to-date, which is just as well for Mac users as the only recourse for firmware patches is with a Windows PC.

The real fun can be found plugging into an iPhone or iPad though. It’s now possible to plug an iPhone or Android into such a DAC, and play better-than-CD resolution audio by bypassing the phone’s limited audio stages.

For the iPhone you’ll need Apple’s Lightning to USB Camera Adapter (MD821ZM/A), or its 30-pin counterpart for earlier pre-iPhone 5 models. (For Android you need a USB on-the-go [OTG] cable.)

These adaptors and cables ensure that only data is being passed between devices, with no attempt to draw DC power over the USB bus from the phone.

To play hi-res audio you’ll also need a suitable player app. Onkyo’s HF Player for iOS works well here. After tweaking the app’s settings, it can be set to output a native DSD datastream using the required DoP protocol to play .dsf and .dff files, enabling an uncanny playback of SACD-quality audio while you’re on the move.

For Onkyo’s app, the initial download is free but it costs £6.99 to unlock its hi-res audio playback. And note that Onkyo will remotely monitor your use of the app, harvest your data and send it back to the company. You can restrict this while on 3G/4G at least by deselecting Onkyo from Settings/Mobile/’Use Mobile Data For’ on your iPhone or Pad.

It can take several seconds to switch to DSD mode from PCM. Another minor foible is a zipping noise, just audible when changing volume while music is playing. Neither are serious issues, and on the whole the unit is easier to use and live with than, say, the Chord Hugo with its unmarked buttons and unlabelled light arrays.

That said, it can still be useful to understand the nano iDSD’s colour codes: when the little top LED glows green, you’re in standard-definition audio territory of 44.1 or 48 kHz sample frequency. When yellow, it’s decoding 88.2 or 96 kHz; cyan for 176.4 or 192 kHz; white for 352.4 or 384 kHz. When lit in blue or magenta, it’s working on DSD formats, traditional DSD64 and DSD128 respectively. 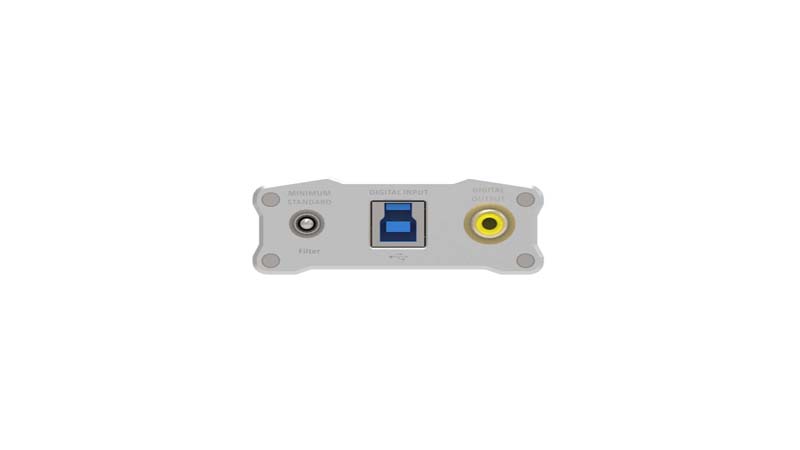 You also get a red light for low battery, and no light means you have a flat battery.

To use the nano iDSD, you can either switch it on first with its switch-clicked volume control – which forces it to its purely lithium-battery operation – or plug into the USB port of a computer, and then switch on, which puts it into a charging mode while you listen to music.

If you’re using with a mobile device (which does not supply power over the USB bus) you will need to power on before plugging in. Battery life is specified at 10 hours playback, and in use we wouldn’t quibble with that estimation.

As a clue to the nano iDSD’s capabilities, we fitted it into a full stereo system as a line-level DAC, using the stereo phono outputs rather than its headphone socket. But it also drove all headphones we tried well and to decent volume. There was also negligible background noise  apparent, even with sensitive earphones.

Perhaps the most popular high-resolution format worthy of the name is 24/96, and here we started with some heavy rock from Led Zeppelin’s recent remasters.

‘Your Time is Gonna Come’ has a challenging open, with its churchy tonewheel organ and its low-level distortion within the recording. A wide stereo soundstage is an audible highlight of ‘Dazed and Confused’ played through the nano iDSD, with plummy electric bass and double-tracked guitar picking out the slow descending riff. Compared to higher-end convertors there was a little less of the enveloping bass foundation but the performance sounded very fine indeed, a real step up from what you’d hear from an iPhone’s headphone jack.

On the same end as the USB port and a digital coax socket is a two-position switch to adjust the DAC’s digital interpolation filter. Changing filters had a small but audible effect. In standard mode the sound was a little calmer as witnessed through the energetic cymbals on Jimmy Smith’s 24/96 The Cat album, while switching to Minimum enlivened the sound through the HF and opened the soundstage a little to a wider sound that sounded more like our reference DACs. 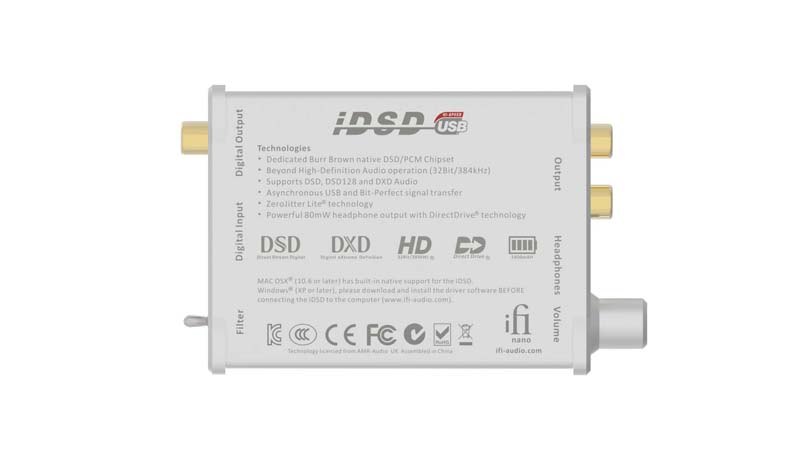 From the Eagles’ ‘Journey of the Sourcerer’, solo banjo notes hung lifelike in the air, with superb stereo steering audible as background plucking swung left and right. Only when the bass guitar and drums struck up did we notice a little less weighty bass foundation here, again compared to more expensive designs.

Yet the nano iDSD can certainly take on more expensive digital convertors, a genuine testament to its quality. But only up to a point of course – we compared it directly to the Chord Electronics Hugo, at around eight times the price, and here could hear how the last layers of detail would be lost to the iFi unit, obscuring some of the insight into the music that high-end reference units provide.

The nano iDSD was slightly greyer, with a less colourful mix of tones to work with. But given the far more accessible price of the iFi Audio headphone DAC, there’s no room for complaint in its performance for the money.

DSD playback is the real ace up the sleeve though, and the nano iDSD is to our knowledge still the most affordable way to hear some of the magic that this audio format can deliver – a more analogue-like and articulate sound that makes many traditional digital recordings sound somewhat cramped and spitty in comparison.