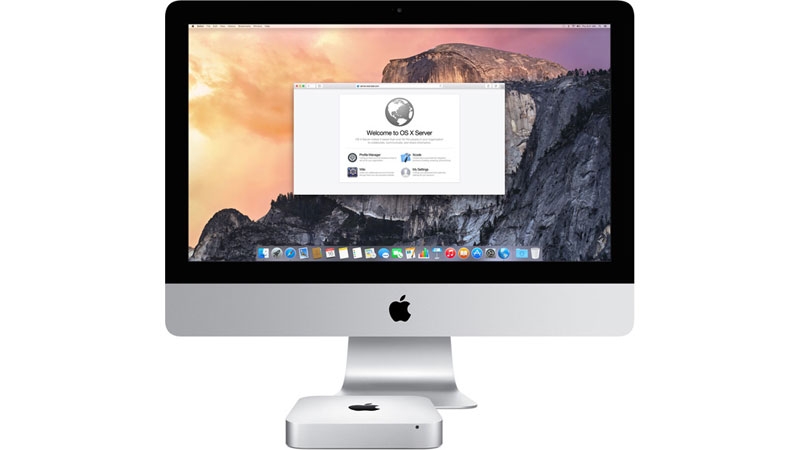 For enterprises that rely on Macs and iOS devices, OS X Server crams in a lot of very useful features that simply aren’t found elsewhere. It lacks Active Directory support, however, so you may still need a Microsoft server to administer Windows clients. Support from Apple for OS X Server starts at £4,709 for up to 10 enterprise-level support incidents within the space of one year (12 hours a day, 7 days a week), with a four-hour response for priority one issues (such as server down). However, DIY support can be found at Apple’s forums, or via a Wiki. For the more ambitious home user who’s overseeing a household full of Apple hardware, a basic setup of a Mac Mini plus a 1TB Thunderbolt drive provides a cheap, powerful and easy-to-use server that can serve files, cache updates, and act as a Time Capsule amongst other things. A basic working knowledge of security certificates and networking is required but there simply isn’t the insanely steep learning curve that accompanies using Linux or Windows under the same circumstances.

OS X Server comes as an add-on for any Mac and installing it is simply a matter of opening the Mac App Store, using the search function, and clicking to pay the £13.99 it costs. That’s not a typo – OS X Server really does cost less than a round of drinks. The download is surprisingly small and once completed a single new icon is added to your Applications list and Launchpad.

Running it starts the Server setup procedure, and in future the same icon provides access to virtually all the server’s functionality (although some features, such as Profile Management, are configured via a web browser). Setup completes quickly without the need to enter a scrap of information and all required details are probed. For a basic server setup you might need to configure your router to resolve your server’s hostname, however, or simply edit your server’s hosts file to this end. OS X Server includes a DNS server you could also use.

It’s during setup you’ll encounter a key new feature of OS X Server – Internet reachability probing. Apple will now tell you which network ports on your server are accessible from outside the network (in other words, the ports your firewall and/or router aren’t blocking). Read our review of Yosemite.

Read about the Yosemite updates and the problems with WiFi here. 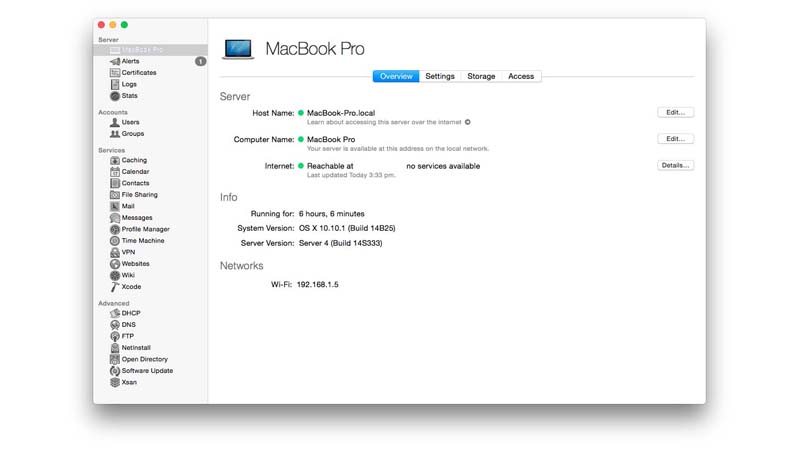 Once the main program window appears you’ll see four headings at the left: Server, Accounts, Services, and Advanced. The Server heading provides access to logs, statistics, alerts and diagnostic info, as well as security certificate management (viewing, importing and creation). The Accounts section lets you add users and groups to the system.

The Services and Advanced section let you activate the various features provided by OS X Server. In most cases this is a matter of clicking the large on/off switch at the top right of the window and inputting configuration details, if required, although very often they aren’t. Services that are currently running show a small green dot to the left of them.

Within each section clicking a clearly labelled link opens a help file providing beginner-level information about that topic, as well as step-by-step tutorials in plain English for typical tasks. See also: Yosemite tips

Although OS X Server brings with it traditional open source server tools such as the Apache web server, plus FTP, DHCP and DNS servers, they’re best ignored because the versions of the software are already a little old. Apple isn’t known for making timely software updates – and upgrades fix security bugs, of course. Put simply, that kind of thing is better handled by a Linux box.

However, server can act as a capable local fileserver for Macs, Windows and Linux computers. Yosemite brings support for SMB3, which features end-to-end encryption, as well as Apple’s own AFP and the older SMB2 (necessary for older computers, including Windows 7). Considering most new Macs feature insanely fast Thunderbolt ports, and Thunderbolt disk drives can be daisy chained, this means a Mac server can be expanded to provide almost infinite amounts of fast network storage.

Where OS X Server excels is in offering services geared specifically towards other Macs and iOS devices on the network. On a very simple level its Calendar, Mail, Contacts and Messages server components let you effectively create a private iCloud for your users, although here you can specify your own hostname, such as that of your business. Configuration is truly as simple as it can be – activating the Messages server, for example, involves simply creating user accounts and then turning it on. Mac and iOS devices then need to be configured to access the server, which is done via the Profile Manager on OS X Server. This outputs a .mobileconfig file that your users then install and which automates all configuration. (iOS devices will also need to install a chat app that supports Jabber because the built-in Messages app is locked to iMessage and SMS.)

Device Management lets you configure or even lock and wipe Macs and iOS in your organisation or household. The steps required are somewhat long-winded and involve enrolling in the Apple Deployment Program, which involves generating a security certificate on the server and pairing it with one of Apple’s certificates, but each step is explained clearly and links provided to the relevant websites. Perhaps more importantly, there are no additional costs, so the procedure is open to just about anybody.

Read: How to manage Macs on a Windows-based network 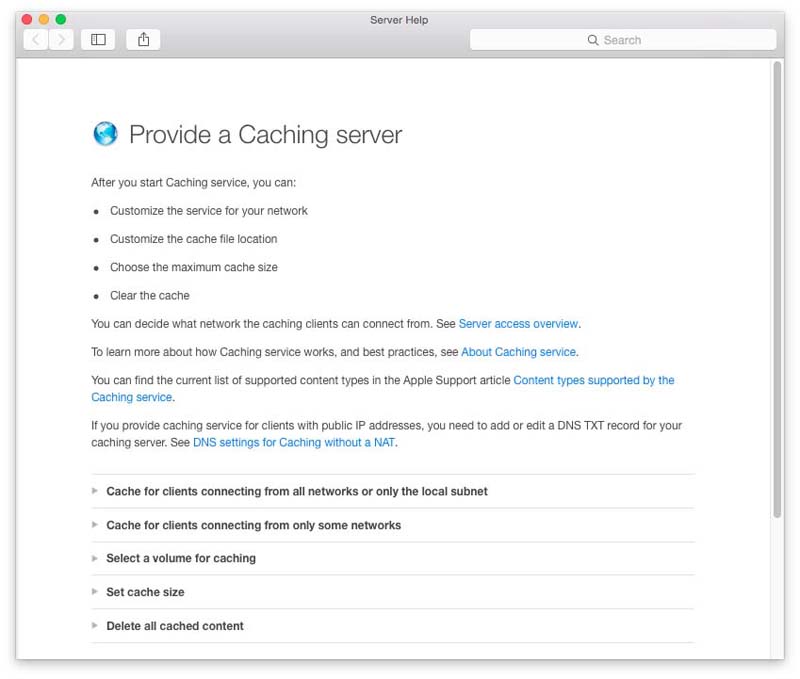 OS X Server can act as a Time Machine repository for Macs, essentially turning it into a Time Capsule to which you can again expand almost infinitely. This is simply a matter of turning on the feature and specifying a folder to be used, after which your server should automatically appear within the Time Machine section of System Preferences on Macs on the network. See also: Pros and cons of Yosemite

The Caching feature of OS X Server lets you turn the server into a central repository for App Store and iTunes content. This includes the ability to cache system updates. How this works is typically simple – once one device requests an app or update, OS X Server downloads it and then caches it for future requests from other devices. This can save gigabytes or even terabytes of bandwidth when an iOS update is released, for example. Setup is again instant and Macs or iOS devices on the network will automatically detect and use your server. Notably, for this feature to work the server must be connected to the router via an Ethernet cable. Read our advanced Yosemite tips

Read How to use Safari on the Mac, Yosemite Safari tips