There is a lot to like about the new Mac mini, not least its lower pricing and modern processor. However, you should note that the older models from 2012 offer exceptionally good processors, and are upgradable, so if you can get your hands on one we recommend that you do.

In October 2014 Apple finally updated the Mac mini. In this comparison review we look at the new Mac mini and compare it to the old Mac mini, which offered many features that are not available with the new model.

It’s been a long time since Apple last updated the Mac mini. Two whole years. Actually the old Mac mini wasn’t a bad machine even towards the end. It had an excellent Intel Core processor – sure it was the previous generation, Ivy Bridge, but it was efficient and powerful. As you can see from the spec comparison below, the older Mac mini looks pretty fast in comparison, despite it’s older processors.

There were a few other points in favour of the old Mac mini and the main one was the fact that it had a spin-off hatch on the underside that you could remove in order to add your own upgrades. Unfortunately the new Mac mini model is a lot more difficult to get inside, and once you do, there is a lot less flexibility for updates and upgrades. Check out the Mac mini on Apple’s web store: here.

Updated with news that Apple now offers a 2TB Fusion Drive option on the top of the range Mac mini.

The spec for the new Mac mini models are as follows:

There are also the following build to order options for the 2014 Mac mini:

Apple has recently added an option that allows you to get a 2TB Fusion Drive for and extra £80 when you buy the £799 model, bringing the price to £879. Only the top of the range model has this option.

The 2012 Mac mini server version included a 2TB hard drive (actually two separate 1TB hard drives), which made it a popular choice among those looking for a media server, so Apple’s decision to offer this 2TB fusion drive is likely a reaction to this. We’ve been told that these drives have only recently become available in a smaller physical size, likely Apple was waiting for this new drive before offering the option for the Mac mini.

As you can see, aside from the entry-level model, the older Mac mini models offered faster quad-core i7 processors along with 2TB storage in the server model. The only improvement on the new Mac mini is the 8GB RAM as standard on the mid and top of the range models.

Getting inside the Mac mini

As we mentioned above, the old Mac mini had an easy to remove base that allowed you to get inside to update components such as the RAM. The new Mac mini is a lot less accessible. All is not lost however; we discovered that you can still get inside the new Mac mini, once you get past Apple’s tamperproof screws on the underside.

The black plastic lid can still be pulled off, but behind that there’s now an edge-to-edge circular steel bulkhead in place, sealed down with Torx T6T security screws. Apple really doesn’t want you to get inside, but with a bit of effort you can get past these screws. 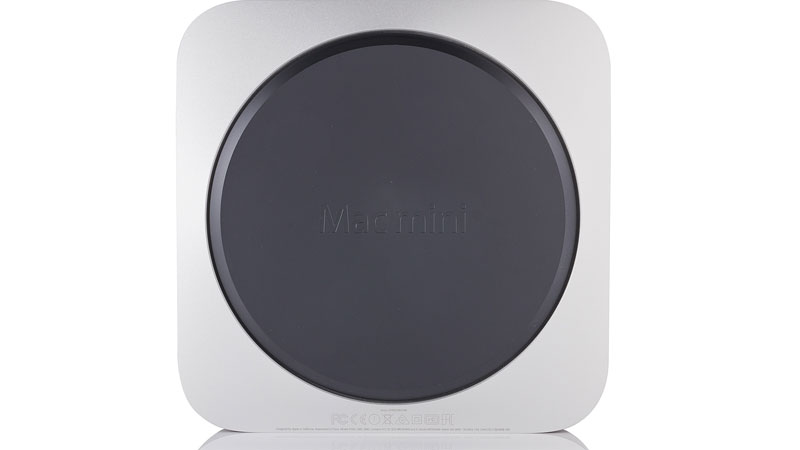 Updating the RAM in the Mac mini

The old Mac mini shipped with 4GB of memory but crucially you could upgrade it to as much as 16GB – not only as a build to order deal when you purchased the machine – you could buy your own RAM and upgrade it yourself.

Recent Macs are notorious for having their RAM soldered onto the motherboard so there is no way to upgrade them later should you decide 4GB RAM isn’t enough. For example, the RAM isn’t upgradable in the entry-level iMac, or any of the MacBook Air models or the MacBook Pro with Retina display. So if that’s what you have you are out of luck.

The bad news about the new Mac mini is that its RAM is now soldered on.

This means that if you want to have more RAM in your Mac mini you need to make that decision at the time you buy it. When you purchase the Mac from Apple you can choose to add more RAM, adding 8GB to the entry level model adds £80 to the price, while adding 16GB adds £240 to the entry level, or £160 to the other options that already ship with 8GB. 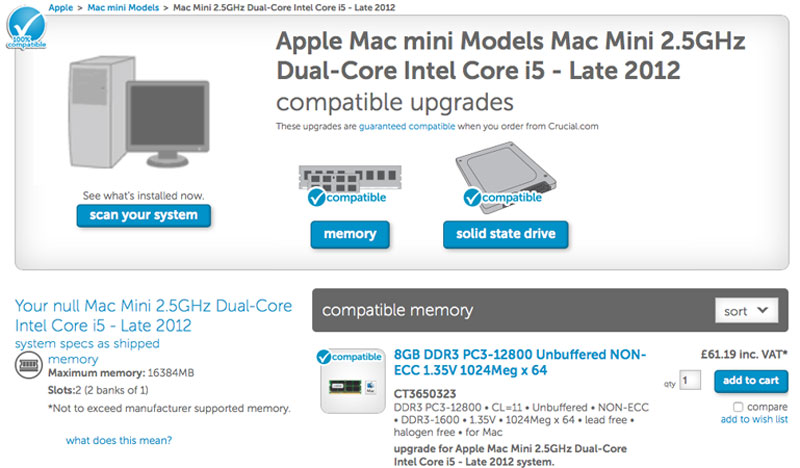 Updating the storage in the Mac mini

It’s not all bad news though. You can swap the internal disk for something much faster, should you wish to. You won’t be able to use the proprietary PCIe-attached flash drive connector, but if you purchase a mini with a standard hard disk, you can remove that and use that port for storage of your choice.

You could buy the cheapest Mac mini and update the storage to a fast flash storage, for example. Just make sure that the storage is compatible first. 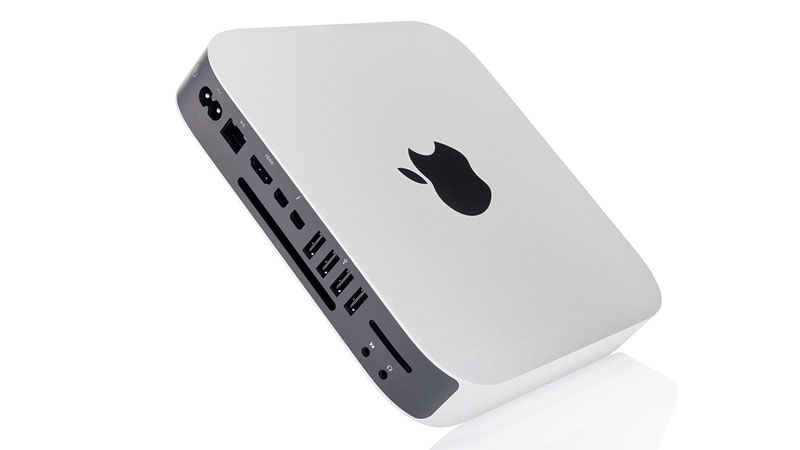 One reason we were so excited to hear that Apple had updated the Mac mini was that the 2012 models were running what is now quite an old Ivy Bridge Intel processor. These models featured a 2.5GHz dual-core Intel Core i5 at the entry level, and a 2.3GHz quad-core Intel Core i7 processor at the high end.

Throughout 2013 Apple updated its other Macs to run Intel’s Haswell processor, and boosted these even more in 2014. Understandably the Mac minis were looking quite out of date by the time Apple finally got around to updating them.

The cheapest Mac mini now has the same 1.4GHz dual-core processor and integrated graphics chip as the MacBook Air and the entry level iMac. Therefore it was no surprise that the new Mac mini’s processor and graphics performance was close to the current MacBook Air range and practically identical to the new £899 iMac. The MacBook Air has the edge due to its flash storage, while the Mac mini and iMac still feature a hard drive as standard.

The other two Mac minis offer Intel dual-core i5 2.6GHz and 2.8GHz processors with Intel Iris Graphics. These are comparable to the processors inside the 13-inch Retina MacBook Pro, but as with the MacBook Air, you can expect the faster flash storage to give these models a boost.  The 21.5-inch iMacs offer 2.7GHz and 2.9GHz quad-core processors, so even expect them to be significantly faster, even with the burden of movable storage.

How do the new Intel processors compare to the ones in the 2012 Mac mini models? As we mentioned earlier, those processors might have been two years old, but they were fast, and, with the acceptation of the entry-level model, they were quad-core Intel i7 processors.

Now the Mac mini offers only Intel i5 dual-core processor options as standard, there are i7 processors available at point of sale, but these are still only dual-core. We have run full tests comparing the previous generation with the latest generation of Mac minis and you can see the results here: Mac mini 2.8GHz review.

In those tests the new ‘best’ Mac mini scored 3363 points in single-core mode, and 7208 points in multi-core mode. The 2012 ‘best’ Mac mini (2.6 GHz Intel Core i7) scored 3308 points single-core, and 12927 points multi-core. So today’s Mac mini showed a 1.7 percent positive increase in point score when mono-tasked; but scored only 56 percent of the older model’s speed with multi-threaded applications.

Read: What’s the difference between Intel Core i5 and i7

Things you don’t get with the Mac mini

The old Mac mini featured FireWire 800. This is now gone, replaced by an extra Thunderbolt 2 port. This means that the only remaining Mac to feature FireWire is the non Retina MacBook Pro, which costs £899.

Nor will you get a DVD drive – the Mac mini hasn’t featured a SuperDrive since 2011, but you can purchase a SuperDrive from Apple for £65. Read our SuperDrive review.

Nor do you get a mouse, keyboard or display with the Mac mini, so when you consider the price you need to factor these in. You may already own a display that is suitable for the Mac mini. A lot of people use the HDMI post to plug the Mac mini in to their TV, making the Mac mini their entertainment hub. 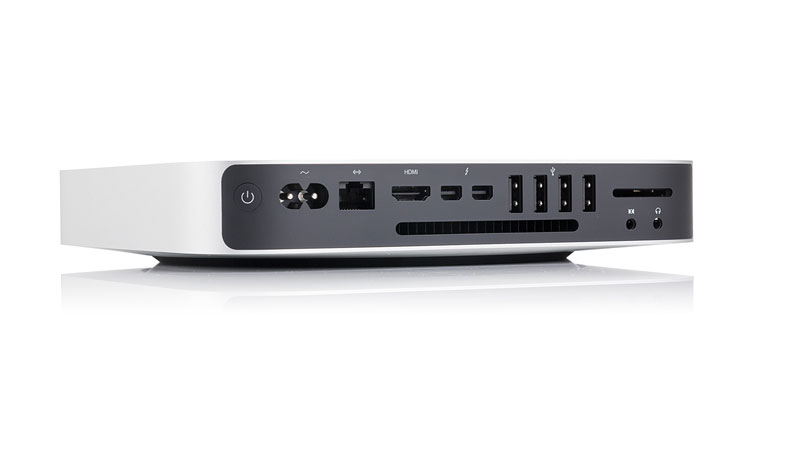 The 2014 Mac mini starts from just £399, and while this isn’t the cheapest price Apple has ever sold Mac mini for (the PowerPC G4 version of 2005 started at just £329) if you allow for inflation it is effectively the least amount of money you have ever been able to pay for a brand new Mac. The other 2014 Mac mini models cost £569 and £799.

There is definitely a psychological advantage in the lower pricing. When you consider that the Mac mini costs the same as the 16GB iPad Air 2, and only slightly more than the 8GB iPhone 5c, we can imagine that a lot of people will be considering spending £399 on a new Mac.

However, you can get a Mac mini for even less than that if you are happy to choose a second hand model. Mac minis come up from time to time on Apple’s refurbished store, although there were none when we looked. You may also be able to pick up a second hand Mac mini on ebay

Read: Connect your Mac mini to a TV: turn a Mac mini into a media hub.