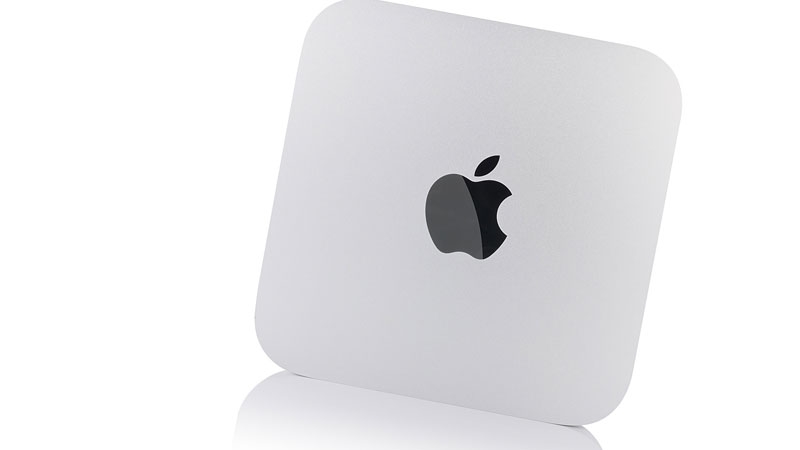 For power users that need that extra processing headroom, the quad-core Mac mini is already sorely missed. For single-threaded applications, the processor performance is little changed, even though we expected the 0.2 GHz advantage to give this model an unequivocal edge. And despite Intel’s advances in faster processing at lower clock speeds, the 2014 generation does suffer in out-and-out multi-threaded speed when compared to the quad-core Mac minis made two years earlier – it may come as little surprise that two cores still comfortably beat four. In its favour, system IO has increased in other areas through the implementation of faster storage drives, improved Wi-Fi and more focused Thunderbolt 2 technology. The adage about steps forward and backward really comes to mind for the new Mac mini, and your personal needs will suggest how many this one’s taken in each direction.

This is our review of the late 2014 top-end 2.8GHz Mac mini which Apple continued to sell until October 2018. As of November 2018 it is no longer on sale, however, you may still be able to find it on sale or as a refurbished option from Apple.

Note that the prices we quote throughout this review were correct at the time of writing, but Apple since put the prices up across the entire Mac range in the UK, meaning that the £799 2.8GHz Mac mini is now £150 more expensive, at £949. To find out more about the recent price hikes, take a look at this article: Apple raises price of its Mac range in the UK

Sure as death, taxes and data loss, there are some givens in this world. One of which is that next year’s PC will be faster than last year’s.

But there is an argument that for the majority of users the desktop PC has already reached ‘fast enough’ – in terms of processor speed at least, even if it’s now apparent that flash storage makes a bigger perceived difference to how quick a personal computer can feel.

However one thing we don’t ordinarily expect is for a newly revised computer to appear which computes more slower than the model that it replaces. Particularly when there’s been not one but two long years between the now-obsolete and shiny new editions.

That’s exactly what’s happened with Apple’s 2014 model of the Mac mini though. Today’s 2014 Mac mini range is in many respects slower than the 2012 range it replaces. Read: 2014 Mac mini v 2012 Mac mini comparison review and our Which Mac? Best Mac buyers guide.

With the entry-level model [read: Mac mini (Late 2014) 1.4 GHz review] there was the distraction of finding the price slashed by one-fifth, from £499 to £399, to sweeten the deal. Inside this new starter model is effectively the same computer as a MacBook Air, albeit working much slower due to the little mini’s reliance on a hard disk rather than solid-state flash storage.

That’s fine for people working to the tightest budgets who don’t require more computing power than is necessary for office duties and some modest creative work. But since the Mac mini launched in 2005 it has developed a cult following from delighted owners who have found the little chap capable of so much more.

The Mac mini has been pressed into service as a graphic designer’s workstation, a home media centre for the family, and as a web server for hosting entire commercial websites.

It’s been ably assisted in these latter kind of duties with the introduction of the Intel Core i5/7-Series processors – and in particular the quad-core editions that first appeared inside the Mac mini in 2011. This was also the Mac mini range where Apple actively encouraged promoting the little mini into front-line server action, issuing a slot-less server edition that packed two hard disks.

Now with October 2014’s updates we find no more quad-core models are available. Standing at the top of the prêt à porter range is the ‘best’ Mac mini with 2.8 GHz Intel Core i5. Given the intervening two years and the upward graph that is the progress of processor performance-per-clock, this model ought to crush the 2.6 GHz-powered ‘best’ of 2012. Let’s see…

Check out the Mac mini on Apple’s web store: here.

In the new corner we have the current best of three off-the-shelf configurations of Mac mini for 2014, here with 2.8 GHz Intel Core i5-4308U dual-core processor, Intel Iris Graphics 5100, 8 GB 1600 MHz memory firmly soldered in place, and a 1 TB Fusion Drive.

(None of the following tests involve measuring the storage speed, and in our experience the higher memory quota makes fractional differences in measured performance when only a single benchmark application running.)

The first test is the cross-platform Geekbench 3, which measures raw processor and memory performance. The application feeds a computer a series of difficult sums to work upon, such as cryptographic routines, lossless file compression/decompression, ditto for JPEG and PNG graphics, blur/sharpen filters and some Mandelbrot fractal crunching.

Today’s best Mac mini scored 3363 points in single-core mode, and 7208 points in multi-core mode. And here, ‘multi-core’ means dual cores with Hyper Threading Technology, which can give the effect of a virtual quad-core chip when using many modern applications.

As an aside, it’s worth noting that the Geekbench 3 benchmark test itself is calibrated with a Mac mini, the 2011 model with 2.5 GHz Intel Core i5-2520M processor. The benchmark was adjusted to make this reference model earn 2500 points in single-core mode for each of the sub-tests of integer, floating-point and memory performance; and it reaped 5112 points overall in multi-core tests.

The top Mac mini of 2012 scored 1.44 and 6.76 points respectively, with an indicated multi-thread speed-up of 4.7x. So here the later Mac had a 4 percent slower single-core speed, and had a little over one-third the latter’s score running multi-core.

In the two years between Ivy Bridge and Haswell generations of processors (2nd- and 4th-generation Core chips), Intel has diverted more attention to the graphics engine that now resides in most of these chips. These graphics solutions now approach what was once only possible with dedicated discrete graphics from nVidia and AMD – especially in the case of the top Iris Pro versions.

Today’s 2.8 GHz Intel Core i5-4308U includes Intel Iris Graphics 5100 (not to be confused with Iris Pro though), with a lower base clock of 200 MHz and maximum clock of 1200 MHz. However the number of pipelines (‘execution units’) has increased from 16 to 40 in the later processor. Which of these graphics engines is more powerful may depend on the application, our results suggest.

From the Cinebench OpenGL test routines, the older Mac mini played the car animation sequence at 24.1 and 17.4 fps, with Cinebench 11.5 and 15 respectively.

The newer Mac mini played the same tests at 28.4 and 25.5 fps, vindicating the new graphics architecture with these results showing up to 47 percent faster framerates.

Turning to our standard Mac game tests of Batman: Arkham City and Tomb Raider 2013, however, we found the trend less certain.

For Tomb Raider 2013 (using Legacy OpenGL mode), we kept the same half-HD resolution and saw results of 34.8 and 23.9 fps, for Low and Normal detail settings. These framerates were barely improved upon by the newer Mac mini, now up to 35.1 and 24.1 fps. It’s less than a 1 percent improvement, but at least not measurably slower

As another gauge of graphics performance, we ran the Unigine Heaven synthetic benchmark test on both systems. The older Mac averaged 17.9 and 8.7 fps, for 720p and 1080p respectively, with Medium detail. The newer Mac averaged 24.2 and 11.8 fps in the same tests. These results showed a 35 percent increase in the available average framerate in the new Mac mini with Intel Iris Graphics 5100.

Where later Intel chips have made breakthroughs is in reduced power consumption, a pivotal trend that is still improving for the sake of mobile battery-powered computers.

As we mentioned, it’s not all about processor speed, especially if you don’t intend running a web server or editing video.

The common bottlenecks that effectively slow down your computer’s speed come down to IO – data input/output – and here there is better news for 2014’s Mac mini.

Wireless speed using Wi-Fi has potentially doubled, thanks to the implementation of 802.11ac in the current series. Where maximum data transfer with three-stream 11n would be up to around 300 Mb/s, 11ac can currently deliver up to around 600 Mb/s. Bluetooth 4.0 is unchanged since 2012, as is the collection of four USB 3.0 ports that made their debut that year. But now replacing the FireWire 800 port is a second Thunderbolt port, with both now uprated to Thunderbolt 2 specification.

The total available speed of Thunderbolt 2 should be no different to the original Thunderbolt, as its 20 Gb/s specification equals the 2 x 10 Gb/s of the first iteration of Thunderbolt. But in real-world use there will be applications where a single higher speed channel can be put to better use than two half-speed links.

Besides Thunderbolt to connect a display or two, there’s still an HDMI port available on the back panel. This makes it easy to hook up a Mac mini to full-HD televisions and monitors, for example, although it’s less suitable for the emerging ultra-high definition displays now available.

This port is now based on the HDMI 1.4 standard from 2009, and while it can output at resolutions up to 4094 x 2160 pixels, it is limited in refresh rate to just 24 Hz. At the UHD resolution of 3840 x 2160, it should manage 30 Hz, but this is still too low for practical use as a computer monitor, where refreshes slower than 50 or 60 Hz typically show conspicuous trails to mouse cursors, for instance.

Storage drive performance has improved thanks to the upgrade to PCIe-attached flash drives. Like previous generation best off-the-shelf model, storage is based on a 1 TB laptop-class hard disk, plus an additional solid-state drive of 128 GB capacity, these united to form a hybrid Fusion Drive. The difference now is the use of PCIe-attached flash, which means this section is now around twice as fast as it was with a Serial ATA-attached SSD.

Our sample of Mac mini was fitted with a 128 GB Samsung PCIe flash drive, and in our tests the larger samples of the same drive can comfortably read and write at around 780 MB/s

In other areas the spec remains the same – gigabit ethernet is still the current standard for wired networking, even if 10 GbE is seriously overdue as a network connection outside of industry. The memory card slot supports SDXC cards, the current state of the art, while the audio sub-system seems to be the same as before too, with 3.5 mm input and output jacks, and digital convertors that support up to 24-bit 96 kHz digital audio.

Finally, we must remind a prospective buyer of the change in memory upgrade policy. Where before Apple made RAM changes simplicity itself with a bottom twist-off hatch, it now locks you into one configuration for the lifetime of the product. The core RAM specification is very similar, clocked at 1600 MHz, but is a new low-power (LP suffix) type, intractably soldered to the logic board.

As standard this model is fitted with 8 GB memory, but if  you anticipate pushing it into hard service, or just want to help safeguard its longevity, you may be advised to configure this at time of purchase to 16 GB, for an additional £160. But this brings the Mac mini dangerously close to a four-figure £1000 price, and it becomes harder to justify that when we know that this Mac mini has less than half the full-bore speed available from the older quad-core model.

UPDATE: The Mac mini has gained a new build to order option.

The 2012 Mac mini server version offered a 2TB hard drive, which made it a popular choice among those looking for a media server, so Apple’s decision to offer this 2TB fusion drive is likely a reaction to this. We’ve been told that these drives have only recently become available in a smaller physical size, likely Apple was waiting for this new drive before offering the option for the Mac mini.

Read: Connect your Mac mini to a TV: turn a Mac mini into a media hub.