Photos is like a younger, hip sibling of iPhoto and brings the Mac up to date with Apple’s existing vision of photo management already seen on iOS. It doesn’t really advance the field of image storage or manipulation, though. Is it a swap-in for Aperture or other pro-level image tools? Good lord, no. Professionals will look at Photos, declare it cute, and then type www.adobe.com into their web browser, sighing as they realise there’s simply no avoiding Creative Cloud. Thanks Apple! However, for basic to moderate photo management, and quick image tweaking, Photos is both very usable and shows a lot of promise for upcoming versions.

Photos stands defiantly on the smouldering heap not only iPhoto but also Apple’s enthusiast/pro-level Aperture product. Both have disappeared from the app store.

Considering iPhoto was one of the original Jobsian babies, Photos is a flag bearer for the new, new Apple. But is the death of the older apps premature? Let’s find out.

Upon first use, the app converts your existing iPhoto or Aperture library to make it accessible via Photos. Don’t worry – your library is still accessible by the older apps. However, edits or additions made using them won’t be reflected in Photos.

You’re also asked if you want to start using iCloud Photo Library. Assuming you answer positively then Photos begins the lengthy background process of uploading. My existing library is 40GB and, as I write, Photos is still uploading it, having started a week ago. Photos’ uploads appear to be pegged at around 120Kbits – very annoying, but arguably a criticism of iCloud rather than Photos.

If your iCloud space isn’t big enough, and it probably won’t be, Photos prompts you to upgrade. I needed to switch to the £2.99/month 200GB package. Is it possible Apple’s hoodwinked us into accepting a subscription model for “free” upgrades to OS X? 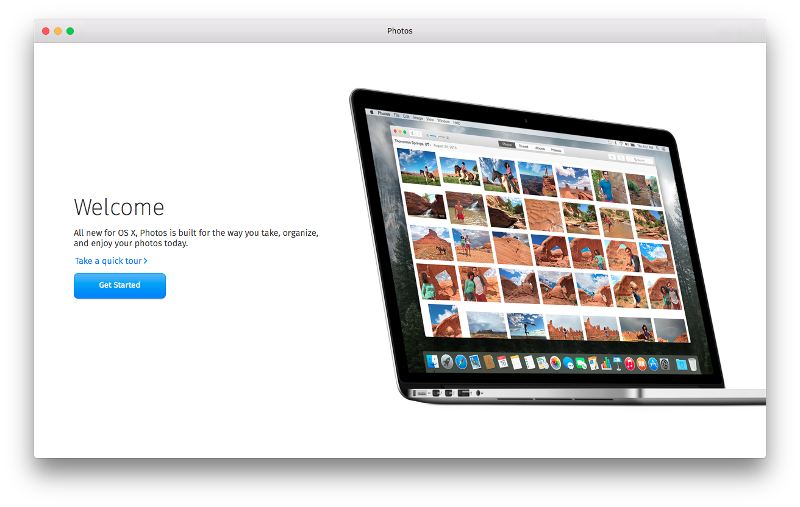 The app has four view modes, represented as tabs at the top of the window: Photos, Shared, Albums, and Projects. The Photos tab is default and hierarchically arranges your pictures and videos into the same Years, Collections and Moments as on iOS.

Clicking the Album tab shows any albums you’re created (including imported iPhoto Events), as well as a handful of built-in albums that automatically filter your pics by whether they’re panoramas, or burst-mode photos, or videos etc. There’s also an All Photos album that simply presents a thumbnail list of your photos from oldest to newest, sans grouping by location.

To create new albums, or indeed to create anything, you’ll need to click the Plus icon at the top right of the user interface. As with iPhoto you can also opt to create Smart Albums that automatically contain pictures matching certain criteria, such as the camera used, or focal length. There appears to be no way to create albums based on geographical location.

You can also create album folders, into which you can collate albums. Strangely, this option is shown only on the File menu and not via the Add button.

Facial recognition takes a back seat in Photos but is still there within the special Faces album. Identifying people in a new picture is a little fiddly – you either click the View > Show Face Names option, which will circle any faces Photos has identified and place a label below, or you click the (i) icon to show an info box and then click the Add Faces button. The latter option lets you click to identify a face even if Photos hasn’t autodetected it. 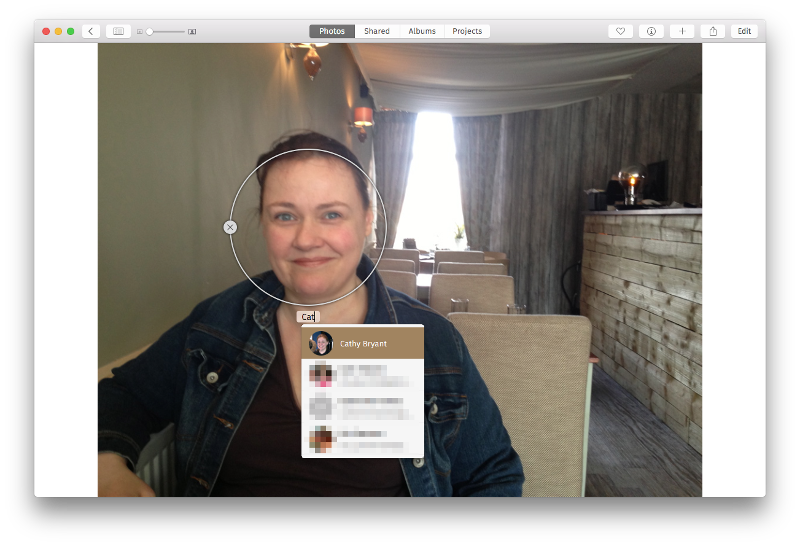 The Shared tab in Photos lets you view photo streams you’ve created via iOS, or that you’ve been invited to view. Clicking the face icon at the top right of the interface shows information, such as who else  can view the album, and whether you should receive notifications when pictures are added, liked or commented by others.

Within Photos you can only create Shared iCloud Albums. These are identical to shared photo streams in that people can be invited via email address, for example, or shared online via the iCloud website. Quite why the nomenclature is different remains a mystery. 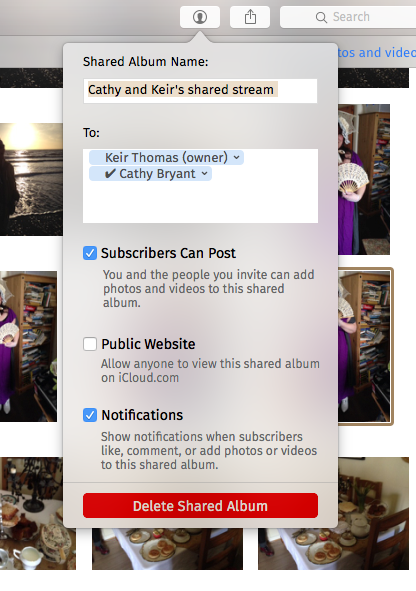 You can create shared albums but although identical to photo streams, they’re not longer referred to as such

Editing is the other side of Photos’ coin and the tools are functionally when you click the Edit button are an expansion of that found in the iOS Photos app. You can apply the exact same Instagram-like filters, for example, or click the dial icon for the same Light, Color, and Black and White sliders. What’s new in the Mac version of Photos are additional tools like Histogram display and Levels adjustment, or additional sliders for Sharpness, Definition, Noise Reduction, Vignette and White Balance. These appear only when you click the Add button and select them after selecting the adjust tool.

There’s also a Heal tool that worked superbly in our tests. Forget about Apple’s previous efforts that merely left behind a murky and/or blurred spot where you click. Hold down the Alt (Option on some keyboards) key and you can define a spot to use as a source for healing – ideal if the autodetection doesn’t work so well. Despite appearances this is not a clone tool. Wherever you subsequently click, Photos will still try and mix the existing area with the origin point you selected.

Heal tool aside, there’s an absence of pen or brush-based tools in the Edit toolkit. You can’t sharpen or blur individual spots in the picture, for example, or fix the brightness/darkness of regions of the picture. Nor can you add text or shapes, or make selections.

Aside from the ability to create slideshows – for which the options are near-identical to those in the older iPhoto – the purpose of the Projects tab is to help you create prints, calendars, posters, photo books and cards. All come direct from Apple.

If you’ve an album or series of photos already selected and opt to create a project then these are automatically used. However, selecting further photos for a project is downright annoying in that you can’t switch to albums you’ve created, or make use of the Faces album to track down pics of an individual. Instead you must choose from the same time/location based listing as you see in the main Photos view. Do you like scrolling? You’ll be doing a lot of it.

There’s a competitive market for photoproducts online and Apple’s prices are as high as they come. Then again, you can order with just a few clicks within Photos. Is convenience worth a 30-50% mark-up? 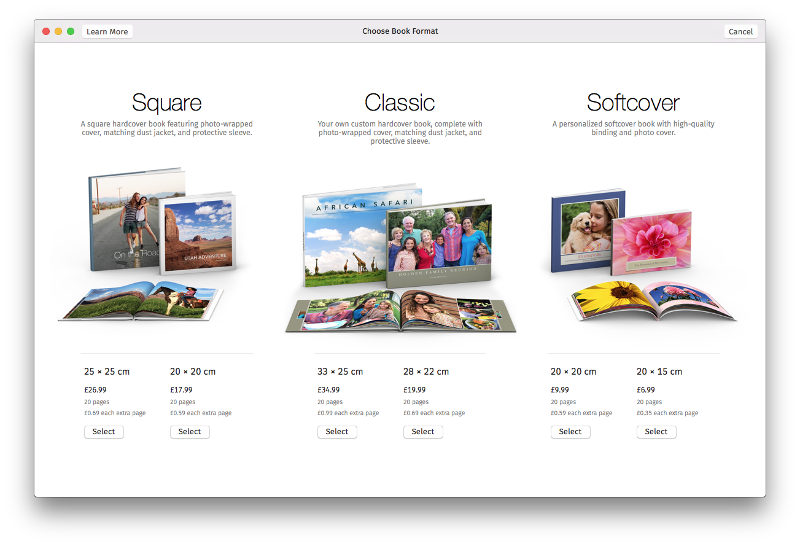 A wide variety of photo products are available directly within Photos although nothing is cheap!

Despite its decade of evolution, iPhoto was always slow. Photos fixes all that. Even on our old Mac testbed we never had to wait more than a second for an album to appear, or for images to appear when we scrolled up or down. Image tweaks were instant. This is impressive.

Put simply, performance is perhaps where the most effort has been invested by Apple. If you hate waiting around then it might be the killer feature involved in your switch from iPhoto.

If you hate Photos, here’s how to uninstall Photos for Mac.