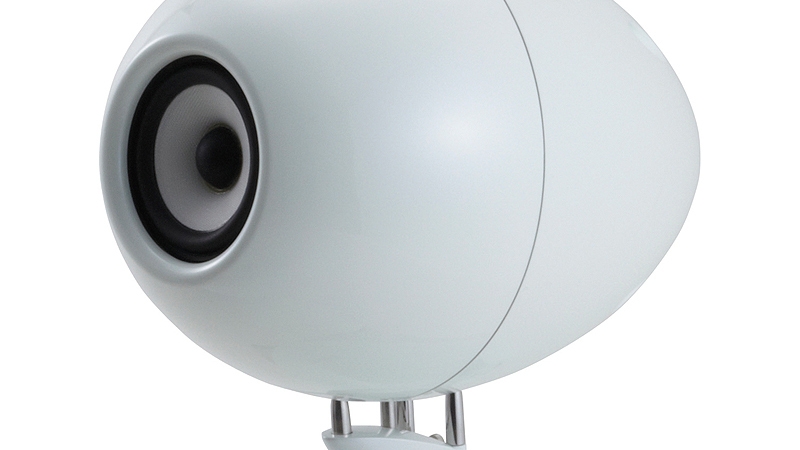 Sounding fast, tight and uncannily well-timed, the Eclipse TD508MK3 is a rare hi-fi loudspeaker that has been clearly designed for music enjoyment and a temporally authentic sound, rather than blindly ticking the usual textbook boxes. Married to a good amplifier these Eclipse speakers can open your ears to the purity of single-driver musical bliss.

Most loudspeakers are designed as a means to an end, to bring sound and music into the home. And that’s traditionally meant a square and flat-sided box with two or more drive units facing the front. Not so the Eclipse TD508MK3, which like others in the Japanese brand’s range resembles nothing less than a large egg with a beady eye looking out at you.

While it has the irresistible streamlining that might catch the eye of discerning aesthetes this is no boutique model just to please the eye. The curved cabinet is soundly styled for its acoustic properties, removing any parallel surfaces that are the starting point of internal standing waves, causing resonances that in turn lead to unwanted exaggeration of notes at certain frequencies; usually at the lower end of the scale. Hence classic box speakers can honk on particular low notes, masking the sound of music higher in frequency along the way.

Rounded cabinets like this have another useful property. It reduces the deleterious effects of a phenomenom called diffraction, where higher frequencies radiating from the speaker unit are bent off beam as they are emitted from sharp-edged lines.

But when it comes to innovative approaches to the classic engineering challenges of an accurate in-room transducer, the egg-shaped box is just the beginning.

Principal among the unusual ideas that have been poured into the Eclipse ’508 is the main – and only – speaker drive unit. For the TD508 has but one speaker unit in each cabinet, to cover the full range of audio frequencies that it can reproduce. Here, that’s a nominal 52 Hz to 27 kHz, albeit with a somewhat reduced –10 dB tail-off at each extreme.

The aim is to use a single driver rather than two or more, since splitting sound into dedicated woofers and tweeters introduces other insidious problems in the way music is reproduced from the speaker.

Eclipse TD508MK3: thinking outside the box

A two-way speaker demands a crossover network to split the sound into two frequency ranges – essentially bass notes to the bass driver and treble to the tweeter. Unfortunately the split is almost always made at some point in the midrange frequencies, where our ears are particularly sensitive to the subtleties of sound (in no small part as that’s where human spoken language is focused).

The crossover network introduces mild distortions to the music signal, especially in terms of the phase – or timing – of the signal. So removing the crossover and using one single driver to cover many octaves at a stroke also removes many of the long-standing issues of accurate sound reproduction. So why aren’t more speakers made this way?

Part of the problem has been the hi-fi drive for maximum bandwidth, to cover all the frequencies audible to the ear. That’s typically stated as 20 hertz to 20 kilohertz, and old-school engineers and spec-chasers will be tempted to plump for the product with the widest available frequency range.

Eclipse TD speakers – where the TD stands for time domain – are instead focused on the timing accuracy of music rather than the widest possible bandwidth. Finding a single driver that can cover the nine or 10 octaves of sound that we can hear is not easy, although advances in materials and design methods has made the task more approachable in recent years.

In the case of the Eclipse TD508MK3, the driver cone is 68 mm in diameter and made from glassfibre (measurably smaller than the 80 mm that Eclipse specifies), backed up by a powerful magnet system. In fact, the magnet is one area that has been upgraded from the TD508II to this MK3 model, specified with 17 percent greater flux density. Another change from its immediate predecessor is a larger overall volume for the TD508MK3 cabinet, up ‘approximately 37 percent’. 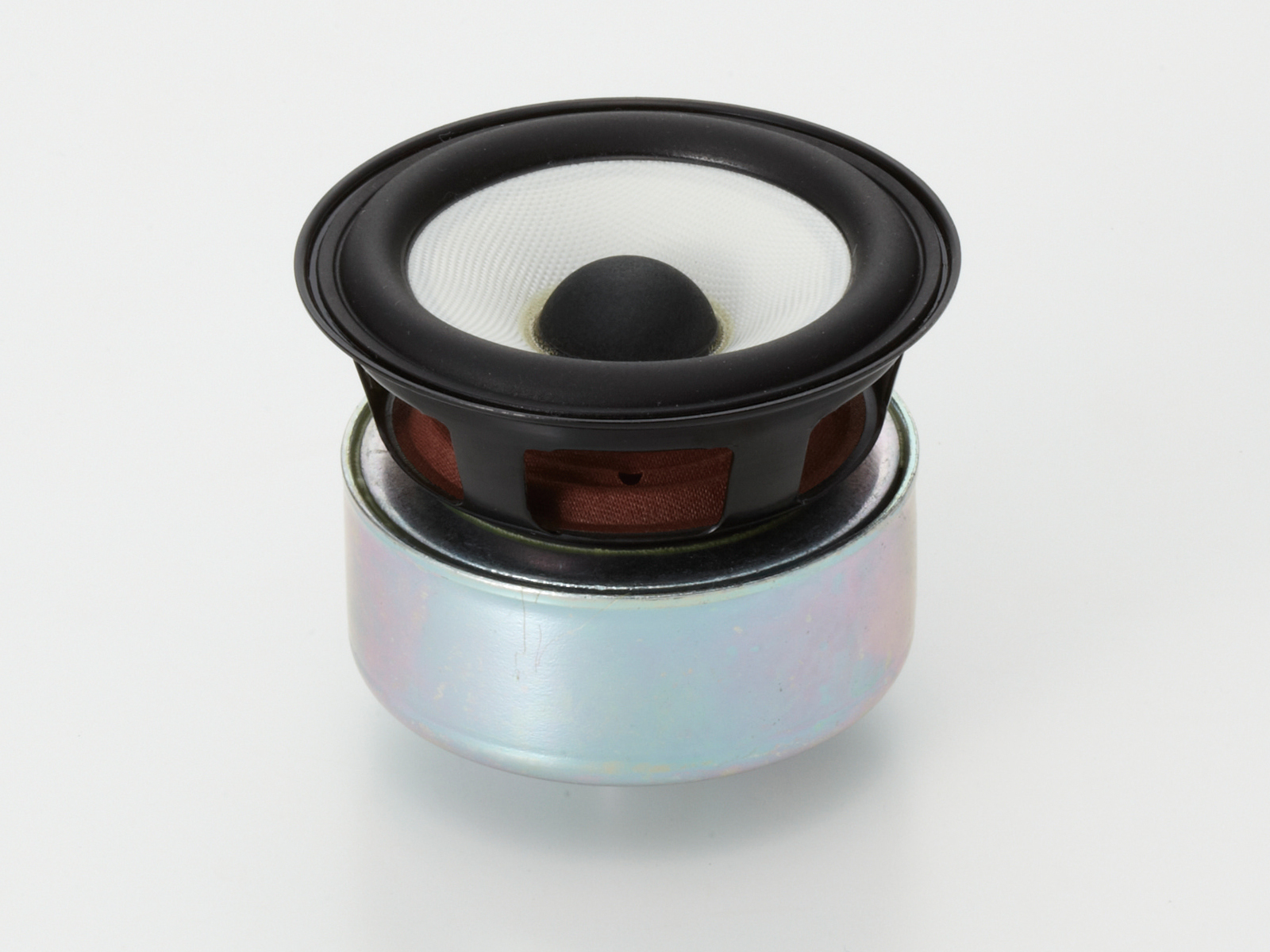 You can find these speakers in three colour finishes – white, black and silver. Our review samples were the latter, although with a strange spotted patina as if there was a defect in the spray or lacquer process.

Whereas most speakers mount the drive units into the cabinet front baffle wall, Eclipse speakers have a smarter system of fixing the highly energetic driver directly to the speaker’s pedestal stand. The cabinet is then compliantly mounted around this assembly, an acoustic cloak that forms an enclosed chamber into which the driver’s rearward radiation is contained.

The cabinet itself is not sealed (‘infinite baffle’) but rear-ported, which helps overall efficiency and bass extension. Although with an overall sensitivity given as 82 dB/W, these speakers are still unusually insensitive and so require a good, powerful amplifier to give their best. 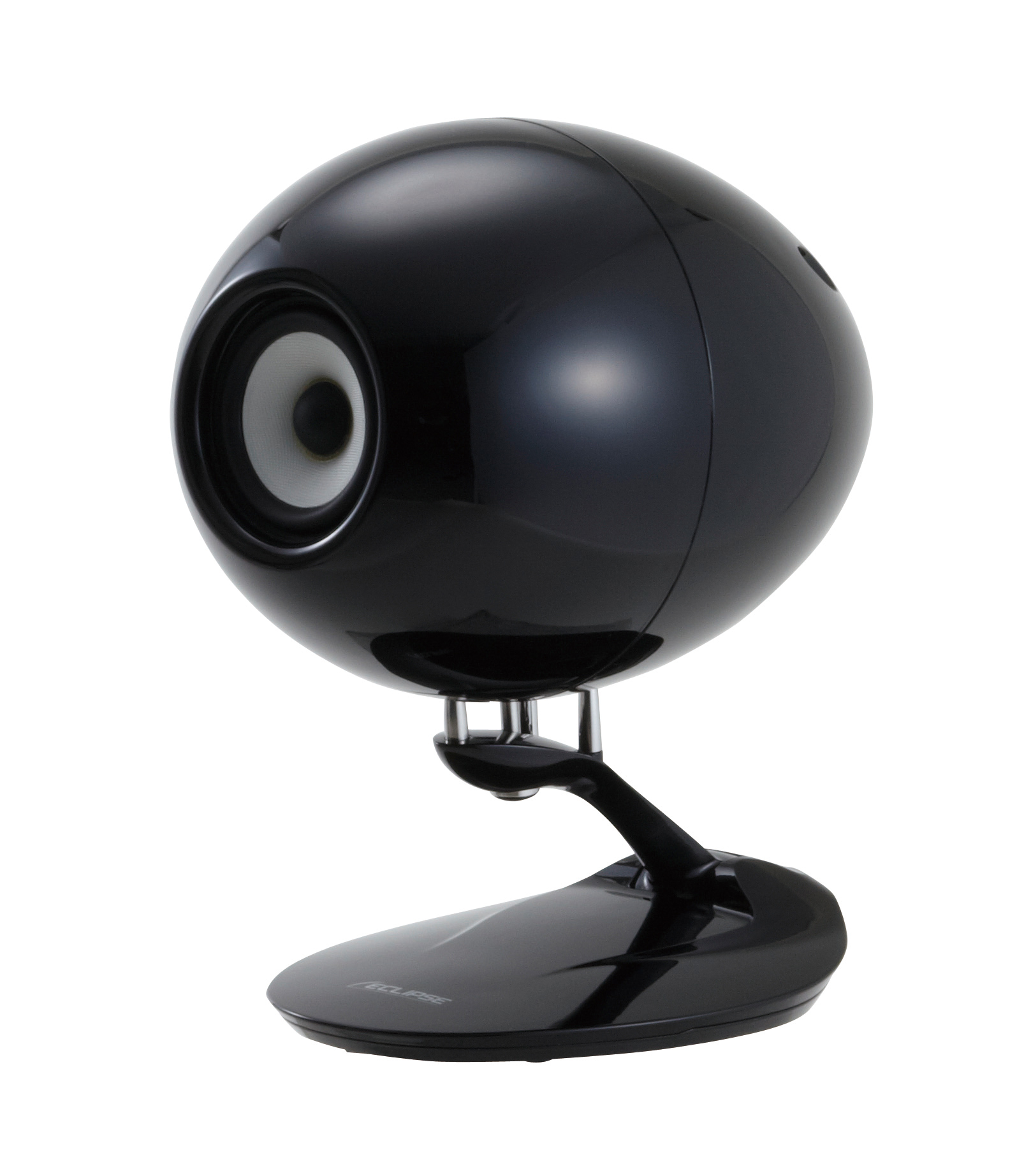 Construction is first-class, based on ABS plastic hemispheres for the main cabinet and sturdy steel chassis beneath. There’s scope for adjusting the height on their small pedestal stands, as well as their angle. Wall mounting is possible; we tried them atop a pair of Target steel/concrete stands designed for the BBC LS3/5A. Eclipse also makes dedicated pillar stands for the TD508MK3, a slim pole 773 mm high that provides perhaps the least intrusive way of siting the speakers on the floor.

On first acquaintance, you may notice a slightly dulled sound tp the TD508MK3 speakers, with their reduced sparkle and glitter compared to familiar betweetered loudspeakers. Get past this though – and your ears do adjust in a short time, like your eyesight when moving into a slightly darkened room – and you may start to appreciate just how ‘right’ the music now sounds.

There are manifold tidyings to the sound, the kinds of details that allow musicians to spot the differences between different designs and vintages of concert grand pianos, for instance.

It is in the leading edge of notes that so much information about an instrument can be heard, and this is where the Eclipse speaker seems to reward in its rendering of transients so faithfully.

With a jazz trio playing away, it became easier to find the pace of the piece – the subtle timing shifts as the band explores a theme, moving tempo back and forth.

The character of voices becomes plainer to hear, and where voices in unison or harmony overlap we found it simpler to pick out individual personalities.

In audiophile terms the soundstage was cleary defined, from three musicians in the wide foreground in the latter example’ but playing in a real room with believable acoustic reflections forming the reverberant physical space. Compared to other speakers the effect is a little muted, with reduced HF extension to spell out the space but arguably overall in a more natural fasion.

We tried the TD508MK3 speakers with a range of amplifiers, starting with the Arcam A19 integrated which powered them to good effect in a more affordable system; but such was the time fidelity of the speakers we found them becoming a go-to choice with more costly designs such as our reference Leema Acoustics Tucana integrated and Chord SPM 1200C power amp. The best sound we heard though was found with a pre/power combination from Gamut Audio, the D3i pre-amp and 220-watt D200i stereo power, where the sweet valvey treble of the amps instilled a little more welcome shimmer and sparkle.

The Eclipse speakers did have a little euphonic lift audible in the upper bass which helped lend weight to the sound along with a trace of chest to male speakers. Besides this they sounded commendably flat in frequency response right through the main musical passband.

Reasonably high volumes were possible, given a good clean amplifier, and as we played louder there was a little dynamic compression apparent alongside some blurring of sound images. You’d need to be playing well beyond the speakers’ comfort zone to be troubled by this though.

Some aspects of the Eclipse speaker’s subversive approach to speaker design are worth pointing out. We found them incredibly telling of the rhythm and timing of music, as noted already, and this spell was cast over close-up initimately miked guitar-and-vocal pieces as well as full-scale orchestral pieces. But with the latter there was a hint of an older flavoured sound through its mid-focused voicing and tailed-off frequency extremes.

A hint of congestion could be found in denser scores, which may benefit from an auxiliary sub-woofer such as one of the two the company makes. The TD520SW is the smaller and cheaper choice but at still three times the price of the main speakers it could be a harder addition to justify.

For us though, we loved the purity of the TD508MK3 playing solo into a medium-sized British living room, with every kind of music and source heard deliciously alive and quite literally unphased.