Come back when both watches have been released for a full verdict.

Even though the smartwatch game started pretty slowly, as time goes by it seems like every man and his brother are bringing out smartwatches for both Android and iOS. Pebble, who successfully funded their original smartwatch on Kickstarter back in May 2012 has headed back to the platform to get funding for the next generation Pebble Time (and Pebble Time Steel).

Apple has also thrown its hat into the smartwatch ring, announcing the Apple Watch at its iPhone 6 event back in September 2014. In the months that followed, there was much speculation about the specifics of the Apple Watch and what it could do. Apple put the discussion to bed when it announced the Apple Watch launch date and specs at the “Spring Forward” announcement in March 2015.

In this video the Macworld team discuss the Apple Watch launch event:

The Apple Watch and Pebble Time are very similar in their offerings. But just how similar are they? Well…

Design wise, the Pebble Time has gone on a diet as its 20 percent thinner than its predecessor, measuring in at only 9.5mm thick. It can be worn on both your left and right wrists, which is handy because not everyone wears a watch on the same wrist. There is only one size of Pebble Time available – it is 40.5mm tall.

When the Apple Watch was first unveiled, there was concern that it was right handed only, but the watch face rotates, so it can also be worn on both hands. The Apple Watch is 10.5mm thick, so slightly chunckier than the Pebble.

There are multiple versions available of both watches. The Pebble Time comes in three colours; black, white and red and the Pebble Time Steel comes in stainless steel silver, gunmetal black and gold. They support interchangeable watchstraps so that you can personalise your watch for different occasions.

There are more variations of the Apple Watch than Pebble Time. There’s the standard Apple Watch that will be available with stainless steel or space grey steel cases, as well as the Watch Sport with anodized aluminium in silver or space grey. Apple’s also created the Watch Edition for those of us with money to burn (prices start at £8,000), which comes in an 18 carat gold body in either yellow or rose gold. As well as the different variations of the watch, each one also comes with two screen sizes as Apple combats the issue of many smartwatches being too large for slender wrists.

As well as colour options for each Apple Watch, they also offer a variety of interchangeable straps customised for each type. The Watch Sport, for example, comes with more colourful and durable straps than the Watch or Watch Edition for obvious reasons. There are a total of 38 available combinations of watch face and strap available.

The Pebble TIme will offer a number of straps of its own and third parties will also be able to sell straps too. 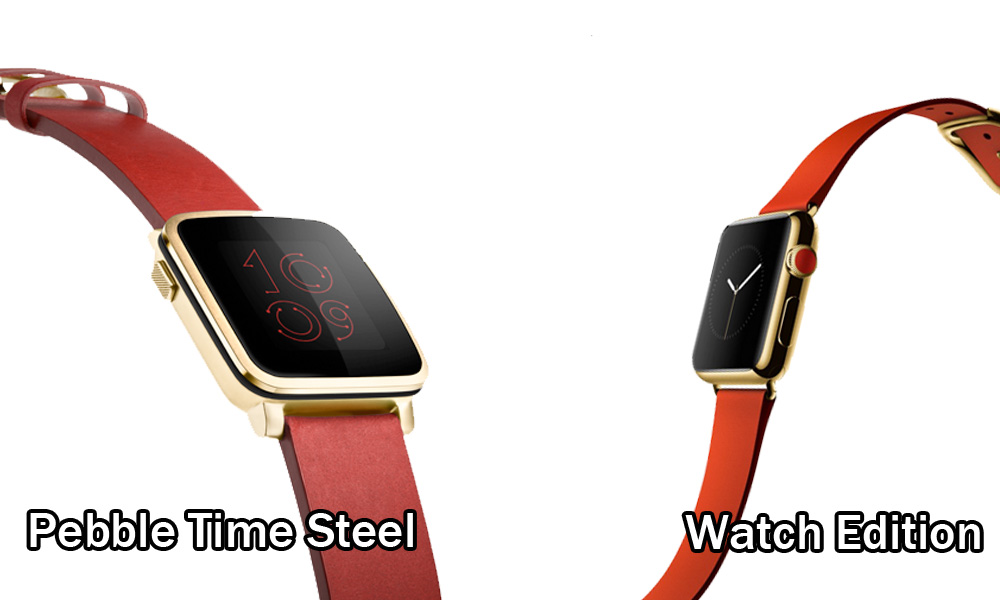 When you compare the photos of the Apple Watch Edition and the Gold Pebble Time Steel, there’s an uncanny similarity between the two. Is Pebble actively going after potential Watch Edition customers and offering them a cheaper alternative?

The display is really where the difference between the Apple Watch and Pebble Time is noticeable. Pebble has decided that like the first generation smartwatch, the Pebble Time will have an ePaper display. The only difference is that this time its injected a boost of colour into the screen. The display isn’t touchscreen though – the input is solely from the buttons on the side of the watch.

If Pebble wanted to use a colour screen, why not use LCD/OLED screens similar to other smartwatches? Simply put, the eColour screen consumes far less battery power than a standard smartwatch screen and in doing so, allows the Pebble Time screen to stay on constantly and last up to seven days on a single charge.

Apple, on the other hand, has gone all out on the Apple Watch display. Boasting an incredible pixel density around 330ppi, the Watch and Watch Edition have a sapphire display. Sapphire is one of the hardest transparent materials in the world – second only to diamond. The Watch Sport however comes with lighter, strengthened Ion-X glass.

It also has touch screen input technology that can sense force and tell the difference between a tap and a hard press – technology that will be critical to using the Apple Watch.

With all this technology and limited battery power, the Apple Watch won’t have an always-on screen like the Pebble Time; instead the screen will turn on whenever you raise your wrist to use it.

Apple can’t compete with these kinds of battery life stats, with Tim Cook reassuring us that the Apple Watch should last up to 18 hours with regular usage. Apple defines regular usage as “90 time checks, 90 notifications, 45 minutes of app use, and a 30-minute workout with music playback from Apple Watch via Bluetooth, over the course of 18 hours.” Apple also offers an inductive charger (or “wireless charger” as people are calling it) with MagSafe technology that’ll snap into place with ease. This is ideal for charging your watch in a dark room before you go to sleep and negates the need for visible charging ports. 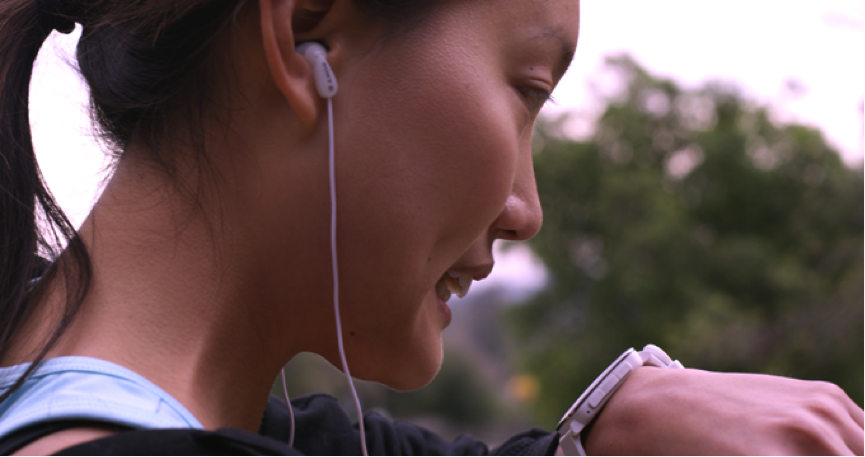 One feature that the Pebble Time has is that, unlike the Apple Watch that requires the user to have an iPhone for the setup and most features, it has the ability to work with both Android and iOS. That’s not to say that it performs equally on both platforms, though.

Using the Pebble Time’s built in mic with the Android OS enables you to send voice replies to incoming notifications (SMS, WhatsApp, Facebook Messenger, etc), whereas on iOS, it’s limited to voice replying to Gmail notifications.

Similarly you can use Siri on the Apple Watch to send voice messages and dictate replies.

The Apple Watch introduces technology not used in any Apple product before: the Taptic Engine. According to Apple’s website, its “a linear actuator inside the Apple Watch that produces haptic feedback”. 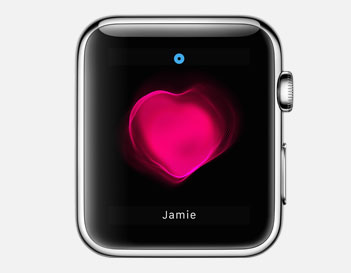 Translated into simple terms, you’ll feel a tap on the wrist when you have a notification – not like the over the top vibration that other smartwatches have that seem to notify everyone else in the room as well as yourself. It’ll give you a recognisably different sensation for different kinds of interaction and it even allows you to send your heartbeat to someone, for them to feel it on their wrist. It’s almost sickeningly romantic, but still a pretty cool feature to have.

Content plays a huge part in the success of any smartwatch. No one would be interested in a smartwatch that has a lack of good content (apps, information) no matter how good the watch may look. The Pebble Time has the added bonus of being compatible with the 6,500 apps & watchfaces that were available for the first generation Pebble. Apps include a range of fitness and sleep trackers. 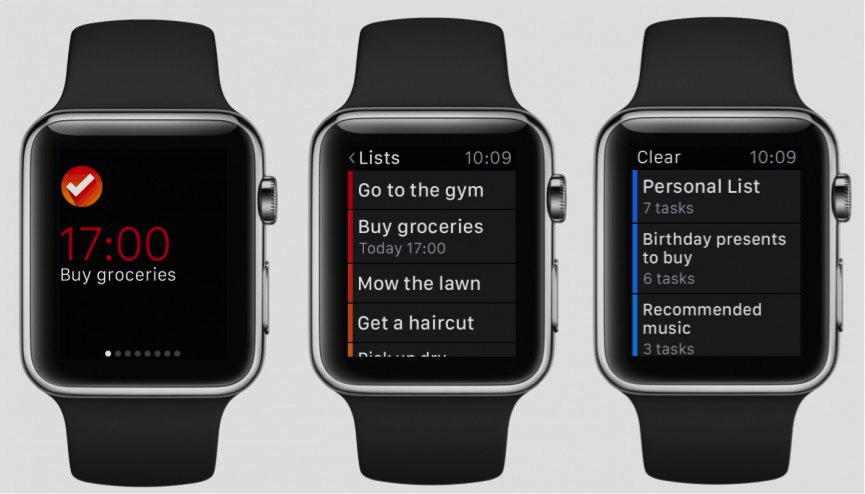 However the Apple Watch has no previous generation and therefore no existing material to port over. That doesn’t worry Apple though – the company released the Apple Watch API to developers months ago in the hope that there will be content available from day one. These won’t be native apps, as you’d expect, but rather extensions from the parent iOS app – for example, if you have Clear installed on your iPhone, you’ll be able to check off points from your lists from your Apple Watch.

You’ll also get a dedicated health and fitness system with the Apple Watch that’ll collect data via sensors on the watch and sync with your Health app, available in iOS 8. It’ll serve up daily goals, as well as a customised weekly report with new targets for you to beat.

While there is no direct support for a health and fitness system on the Pebble Time, it does have an API that develops can (and do) use to turn the watch into a fitness tracker, feeding information to your phone about workouts, steps, sleep, etc. The Pebble Time is compatible with RunKeeper, Misfit and Jawbone just to name a few.

Pebble Time marks the release of an updated Pebble UI called “Timeline”. Instead of all your notifications being hidden inside their own apps, like they are now, they’ll now be laid out chronologically. With a single click you’ll be able to see what you’ve got coming up – the watch connects to calendars, alarms and apps, organising all the most relevant information for you. Similarly, you’ll be able to do the same for the past and scroll back to that missed notification or recall how many steps you took yesterday.

The Apple Watch offers notifications that you’ll be alerted by, by a tap on your wrist. You’ll then be presented with actions that you can select directly from the Watch, such as favouriting a tweet that you’ve just been mentioned in, similar to how notifications work on iOS 8.

The Apple Watch user interface utilises the digital crown, a second button below the crown and the touch screen. The watch face is touch sensitive and reacts to taps and swipes as well as the level of pressure you are using, distinguishing between a regular tap and a hard press, which will access different menus.

The crown, typically used to adjust the time on a watch has been reimagined for use with the Apple Watch. It’s now the primary control to navigate around the Apple Watch interface (apart from the touchscreen but we’ll come to that).

There are three buttons on the side of the Pebble Time that are your key to navigation. These buttons allow you to browse through the smartwatch, generally using the top and bottom buttons to scroll through various menus with the middle button reserved for selecting. There’s also a single button on the other side, which presumably has the same purpose as it did on the previous generation – to go back a step and therefore completely negate the need for a touch screen.

Due to the response that Pebble has had in regards to the Pebble time (over 64,000 backers), it’s entirely possible that the release date will slip – especially for those that waited to back the project as it’s organised on a first come, first served basis.

The Apple Watch will be available to preorder on the Apple Store website on 10 April before its general release on the 24April. It’s not a worldwide launch though, as the Apple will only be available in Australia, Canada, China, France, Germany, Hong Kong, Japan, the UK and the US.

If you’re unsure of whether you like the Apple Watch, you can go to any Apple Store from 10 April and go hands on with the various Apple Watches. As well as Apple Stores, you can also go to Galeries Lafayette in Paris, Isetan in Tokyo and Selfridges in London.