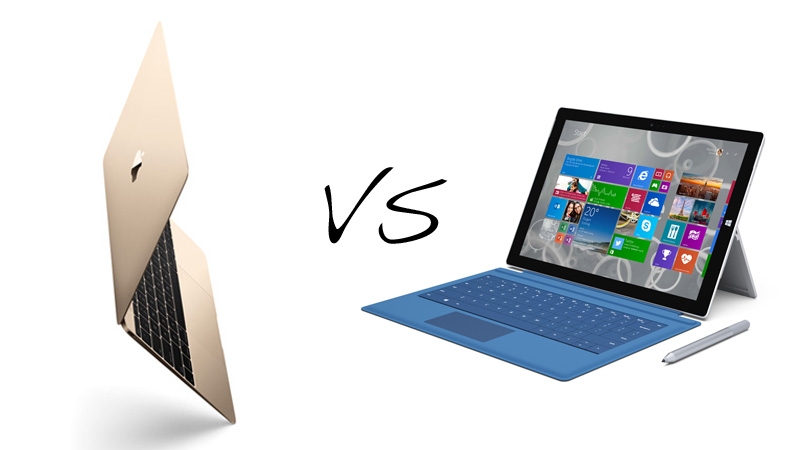 It’s a tough choice between the MacBook and Surface 3 Pro. Both have their strong points and weaknesses, but overall we’d have to choose the MacBook. The amount of attention to detail that Apple has and the features that the MacBook has makes it the better choice of the two. As we said, it is a tough choice and really it comes down to the individual and their portable computing needs. The Surface 3 Pro boasts some great features including its touch screen and thinner, lighter form factor but it just doesn’t feel comfortable to use over long periods of time.

While the Microsoft Surface 3 Pro is technically a tablet, Microsoft claims that it can meet the needs of a regular laptop user. When it was announced, it was compared a lot to the MacBook Air. But since then, Apple has announced the MacBook – how does Apple’s latest offering compare with the claimed laptop killer, the Surface Pro 3? Read on to find out!

Let’s start by comparing the prices of the MacBook and the Surface Pro 3. The cheapest version of the Surface can be picked up for as little as £579, but note that the initial price doesn’t include the £109 keyboard, so lets say the cheapest Surface 3 Pro is £688.

It’s still considerably cheaper than the MacBook, with an entry-level price of £1049 – but it also has a higher spec than the entry level Surface 3 Pro, with double the RAM and four times the storage.

As you can see that once you add on the extra £109 to the Surface Pro 3 line-up, it starts to get expensive pretty quickly. In fact, the title of most expensive model surprisingly goes to the Surface, even after the original price took a £250 price drop.

It’s also worth noting that the highest spec Surface only matches the spec of the MacBook, it doesn’t beat it. That’s not suggesting that it’s not worth the extra money – with the Surface, you get a device that can be used as a notebook and a tablet, with the added bonus of a stylus.

Though the purpose of the MacBook and Surface Pro 3 is quite similar, the two couldn’t be any more different in terms of design. The MacBook is the thinnest laptop that Apple has ever created and is actually 24 percent thinner than the MacBook Air. The MacBook measures in at 3.5mm at its thinnest point and 13.1mm at its thickest, a feat of design and engineering that shouldn’t be disregarded.

However 9.1mm thick Surface 3 Pro is both the thinner and lighter option of the two, weighing at only 1.76lb compared to the 2.03lb MacBook. However it should be pointed out that the without the Surface 3 Pro’s Type Cover, it’s pretty much a tablet and some leeway should be allowed for the Macbook’s non-detachable keyboard.

The Surface Pro 3’s Type Cover, which magnetically snaps into place, provides you with a full keyboard and track pad. The good news is that the Type Cover is, in Microsoft’s own words, “one of the thinnest mechanical keyboards available” that only adds 5mm of bulk to the Surface when it’s attached.

Like the MacBook, the Type Cover is backlit, a massive plus for working in dark environments. It’s also available in five different colours: red, purple, blue, black or cyan – all of which compliment the black and grey colour scheme of the Surface Pro 3.

The MacBook on the other hand is made from aluminium and is the first Apple laptop to come in more than one colour. As with the iPad Air 2 and iPhone 6/6 Plus, the MacBook comes in a Silver, Space Grey or Gold finish.

It features a full keyboard that Apple had to completely redesign to fit. The biggest improvement to the keyboard is the underlying mechanism – traditionally, keyboards use a scissor mechanism that makes keys wobble around the edges. Apple decided to reinvent the mechanism and designed the Butterfly mechanism, which is made from a stiffer material and allows for a more stable, responsive experience.

Comfort wise, we’d have to say that the MacBook provides a better typing experience than the Surface Pro 3, especially when being used on your lap. This is mainly because of the fact that the Surface Pro 3 is naturally a tablet, and while it has a built in kickstand with different angles available, it’s just not as stable and solid when sat on your lap.

Up until now, Apple fans have had to decide between an 11.6” screen and a 13.3” screen for their laptop, but that all changed with the MacBook. The MacBook boasts a 12” Retina display with IPS technology and an amazing 226 pixels per inch.

The Surface Pro 3 also has a full HD 12” display with ClearType technology built in. ClearType is Microsoft’s answer to sub-pixel rendering technology, which aims to improve the appearance of text on screen but sacrifices colour accuracy at the same time. The resolution of the Surface Pro 3 is slightly smaller than that of the MacBook too, at 2160×1440 and 216ppi.

The touchscreen also enables stylus use, which Microsoft has also thought about. While a stylus for the MacBook would be a pretty useless accessory, Microsoft offers its own branded stylus, the Surface Pen. The Surface Pen is a battery-powered stylus that you can use with the touchscreen for more accurate input – a huge bonus, especially for graphic designers and the like.

While we mentioned the processor speeds when discussing pricing, here’s a better look at the internals of both the MacBook and the Surface 3 Pro.

The MacBook will of course run Apple’s latest OS, OS X Yosemite, software that works hand in hand with other iOS products. OS X Yosemite gives you access to the Mac App Store, as well as other intuitive features, including the ability to make and receive calls/texts from your iPhone directly on your Mac.

Unlike Apple’s tablets that run a unique OS, the Surface Pro 3 runs a full version of Windows 8.1 Pro, which is designed to be used with a touchscreen. It essentially allows you to install and use desktop programs, such as Photoshop or Microsoft Word, on a tablet.

In terms of battery life, both Apple and Microsoft claim that their respective products will last around 9 hours when wirelessly browsing the web. Of course, this will vary depending on what’s running – using processor hungry programs will cause the battery to drain a lot faster.

Interestingly, Apple claimed that its MacBook Air would last around 12 hours on a single charge but would often last longer, which makes us wonder whether the MacBook will follow in the Air’s footsteps.

Connectivity wise, both the MacBook and the Surface Pro 3 offer Wi-Fi 802.11ac but are also compatible with 802.11a/b/g/n. They also both have Bluetooth 4.0 wireless technology, but that’s where the similarities end.

The MacBook has a single USB-C port. Just one. The good news is that USB-C has been specifically designed to be able to handle charging, video output and data transfer all at once. Pretty impressive stuff, right? The bad news is that the redesigned USB-C port means that adapters will be needed if you want to plug in any USB 2.0/3.0 devices.

The Surface is more prepared with connection options, boasting a full size USB 3.0 Port, MicroSD card reader and Mini DisplayPort. This may be the deal breaker for some people; especially those of you that have and use USB powered accessories regularly.

In regards to the camera, the new MacBook has a rather underwhelming 480p FaceTime camera just above its screen. It’s interesting to note that Apple chose to use a 480p camera when a 720p FaceTime HD camera is available on pretty much every other current Apple laptop and desktop.

The Surface Pro 3 definitely comes out on top when it comes to cameras, boasting not only one but two HD cameras – one on the front, one on the back. The resolution is better than that of the MacBook too, with both cameras boasting 5MP sensors. This means that Skype video calls, selfie taking and general camera use should be an all around better experience on the Surface Pro 3.