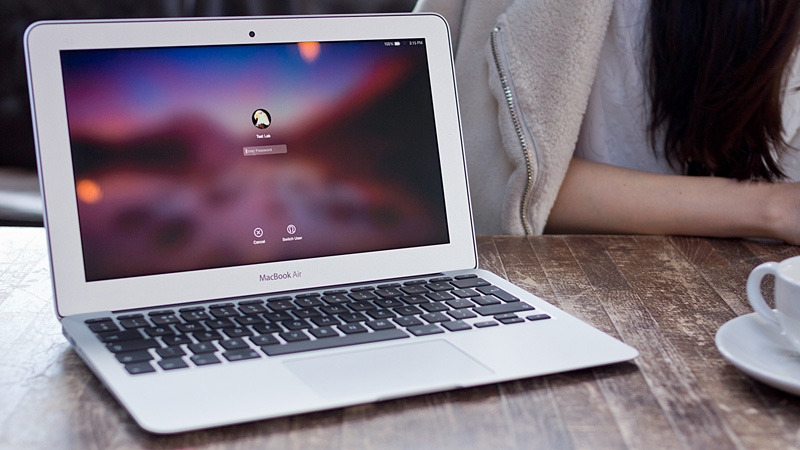 Available at the same price as last year, the new 11-inch MacBook Air has the same super-fast storage as before, and around 10 percent increase in processor performance. Gaming performance was always borderline, and now we find it no better and even fractionally slower. But overall battery runtime increased by almost a third in our tests, a very useful upgrade on the already very decent 10 hour-plus battery life of the previous generation.

Our new MacBook Air (11 inch, early 2015) review explains and analyses the changes Apple has made to its MacBook Air ultraportable laptop line-up (such as improved specs and consequent enhanced performance) and the things Apple has kept the same (such as physical design and the screen). We also look at UK pricing and availability of the new MacBook Airs, and consider whether they represent good value for money.

The 11-inch MacBook Air, the smallest of all Apple Macs, received a modest update in spring 2015, at Apple’s Spring Forward launch event for the  Apple Watch. Like its 13-inch counterpart (our  13-inch MacBook Air review is here), the little notebook computer gained a new Intel Broadwell-series processor and Thunderbolt 2 connectivity. But in contrast to the original-size MacBook Air with 13.3-inch screen, the entry-level Mac notebook keeps the same two-lane PCIe-attached flash drive as before.

In all other respects the Early 2015 MacBook Air is the same laptop as the last main refresh of October 2013. (Although there was a minor upgrade in April last year, when the main Intel processor received a running upgrade from 1.3 to 1.4 GHz.) Still, it remains a compelling deal: at £749 this is the cheapest Mac portable you can buy. 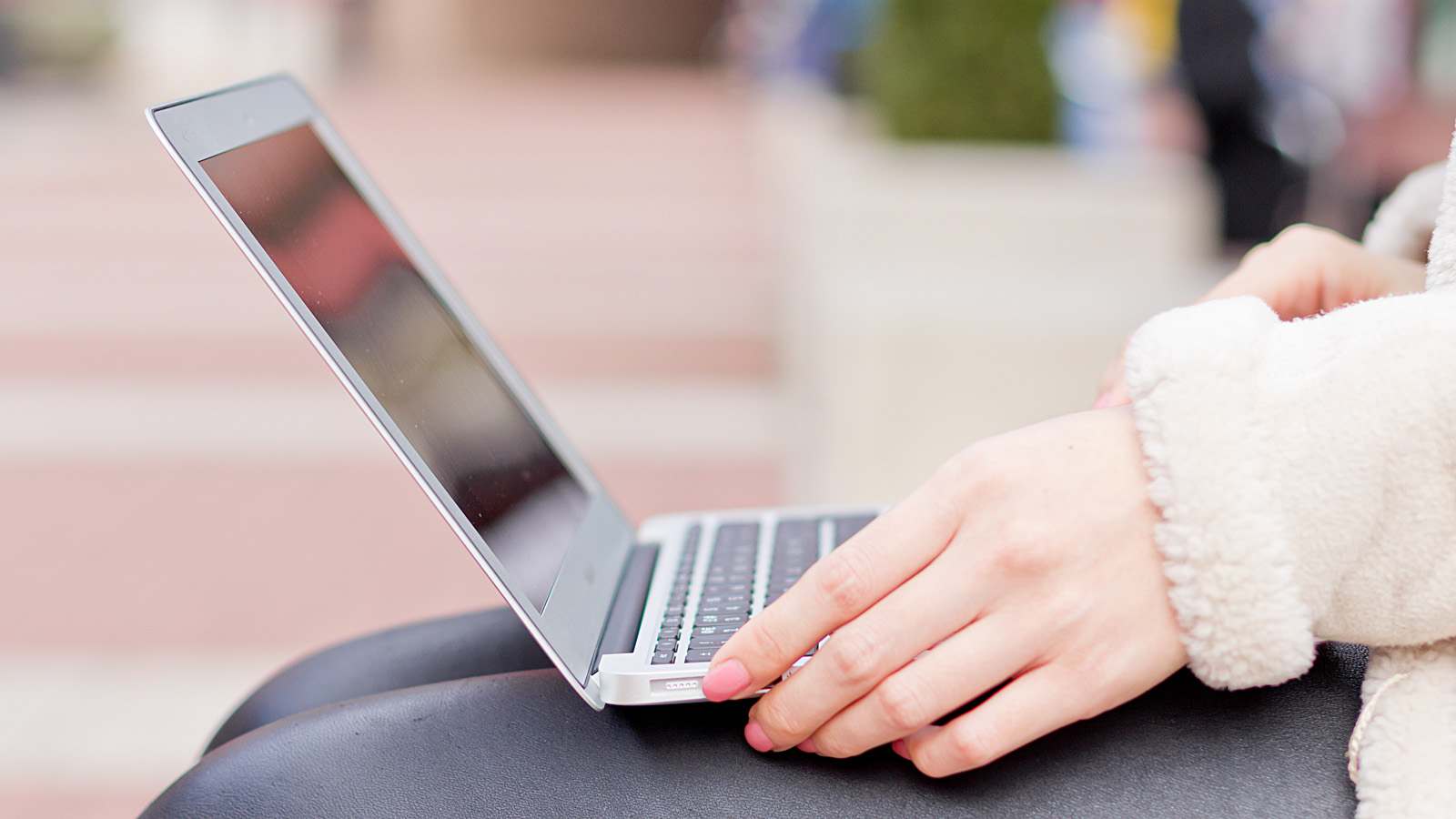 Let’s look at physical design first of all – which won’t take long because of the lack of change here. Like the 13-inch Air, the 11-inch Air for early 2015 has the same chassis as we saw in the previous generation.

That means exceptional build quality and stunning looks, admittedly, but it’s hard not to be a little disappointed by the lack of change on these machines when the 12-inch MacBook got such a radical rethink. (Not everyone likes that radical rethink, of course. Read: Here’s why it doesn’t matter that the MacBook is expensive, underpowered and only has one port.)

We have the same sturdy yet lightweight chassis milled from solid aluminium, and an 11.6-inch TN LCD screen, which stands apart from all other Mac computers and displays – it’s the only 16:9 widescreen display in the range. All other Macs made in the past nine years have had 16:10 aspect ratio, a shape that’s more versatile for both productivity and entertainment.

Like the 13-inch, it has one USB 3.0 port on each side, plus MagSafe 2 and headset jack on the left; and Thunderbolt 2 port on the right. One minor difference in specification is the absence of an SD card slot, which can be found on the 13-inch MacBook Air.

The 13-inch MacBook Pro mostly embodies the same cautious design ethos, with one exception: it did at least get the cool new Force Touch trackpad. The new Air doesn’t even get that – or the ‘butterfly mechanism’ keyboard from the new 12-inch MacBook, for that matter. 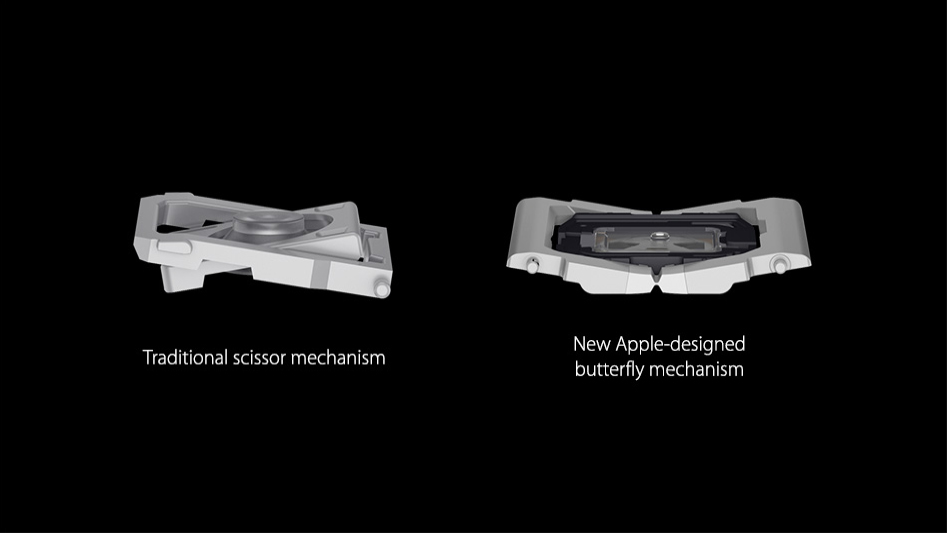 The Air’s screen, too, is essentially unchanged, even though there have been endless rumours about Apple adding Retina-class displays to this line. The 11-inch Air model actually has an 11.6-inch screen, to be precise, with a resolution of 1366 x 768 pixels and a pixel density of just over 135ppi (pixels per inch).

(Apple doesn’t list pixel density on the Airs’ tech specs page, which one might take as an indication that it’s not terribly proud of it. We had to work it using the Pixel Density Calculator.)

Our sample 11-inch MacBook Air included a display from Samsung, with very similar performance to the LG/Philips panel we found in our sample of this year’s 13-inch model.

Colour gamut indicated by a Datacolor colorimeter was limited to just 40 percent sRGB and 30 percent AdobeRGB, but we did find a just-better contrast ratio of 440:1. Colour accuracy was almost the same, with an average Delta E figure of 5.4, just below and thereby better than the 5.9 Delta E we measured on the 13-inch version.

It’s not an particularly impressive display when set against the Retina panels on more expensive Macs, although the key contrast-ratio figures are strides ahead of budget displays on Windows laptops, which often come in at 100:1 or worse. 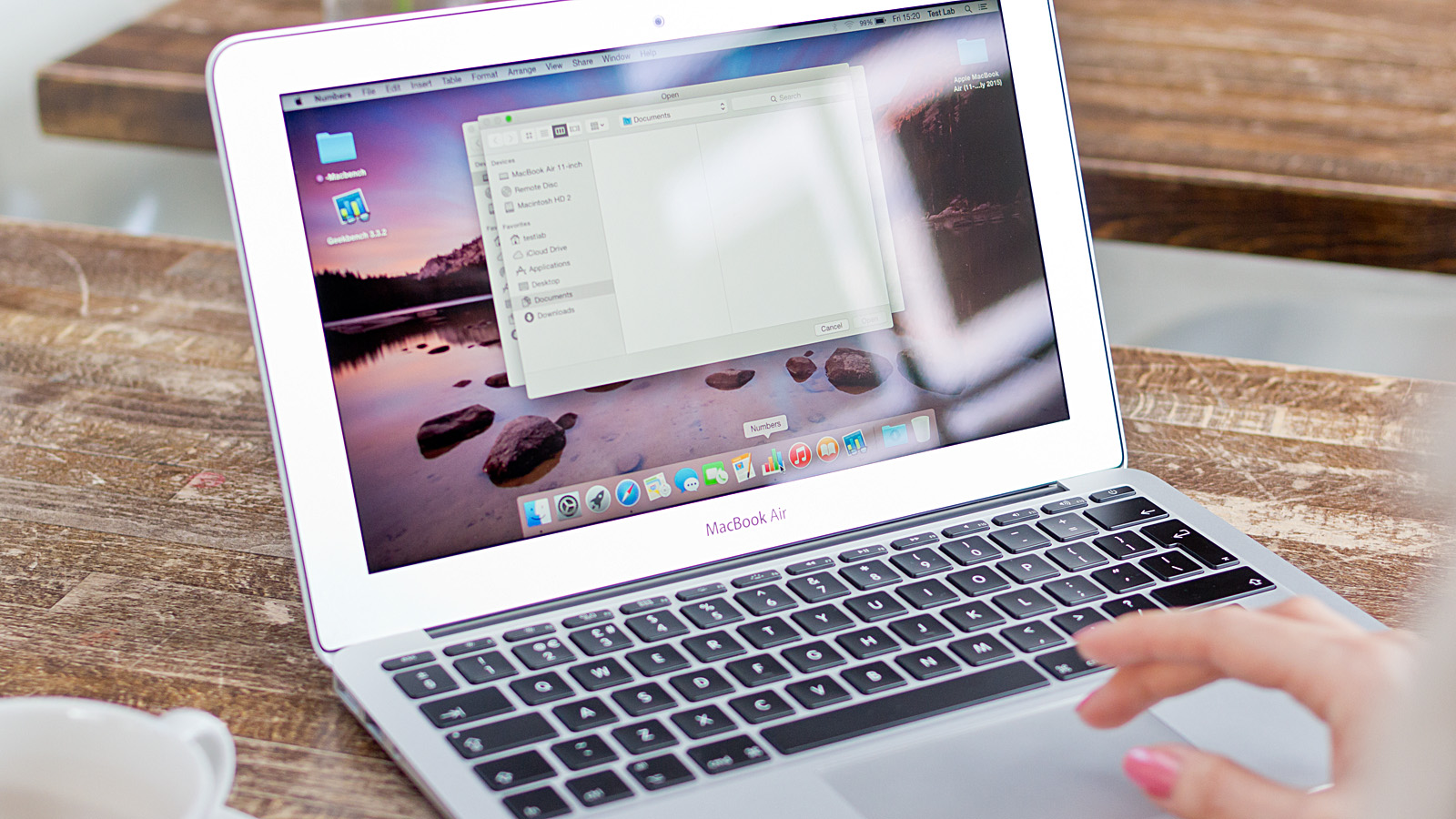 We’ve mentioned some of the key specs, but let’s compare the full set of the specs for the 11-inch MacBook Air (early 2015) with those of the mid-2014 11-inch Air. We’ve marked the specs where it’s possible to pay more for a higher spec with an asterisk.

As you can see, there are only three differences between the specs of this year’s and last year’s 11-inch Air, although they are pretty important ones.

The early-2015 Air gets a newer, faster processor chip (one that’s part of Intel’s Broadwell generation of processors, and should therefore offer superior power-efficiency); a better graphics setup; and Thunderbolt 2, replacing the Thunderbolt port in last year’s Air Thunderbolt 2 offers theoretical data transfer speeds that are twice those of Thunderbolt 1: up to 20Gbps. (The 13-inch Air gets a fourth upgrade – faster flash storage – but the 11-inch model misses out.)

Interested in that solid-state storage? Here’s what the 11-inch MacBook Air looks under under the hood: 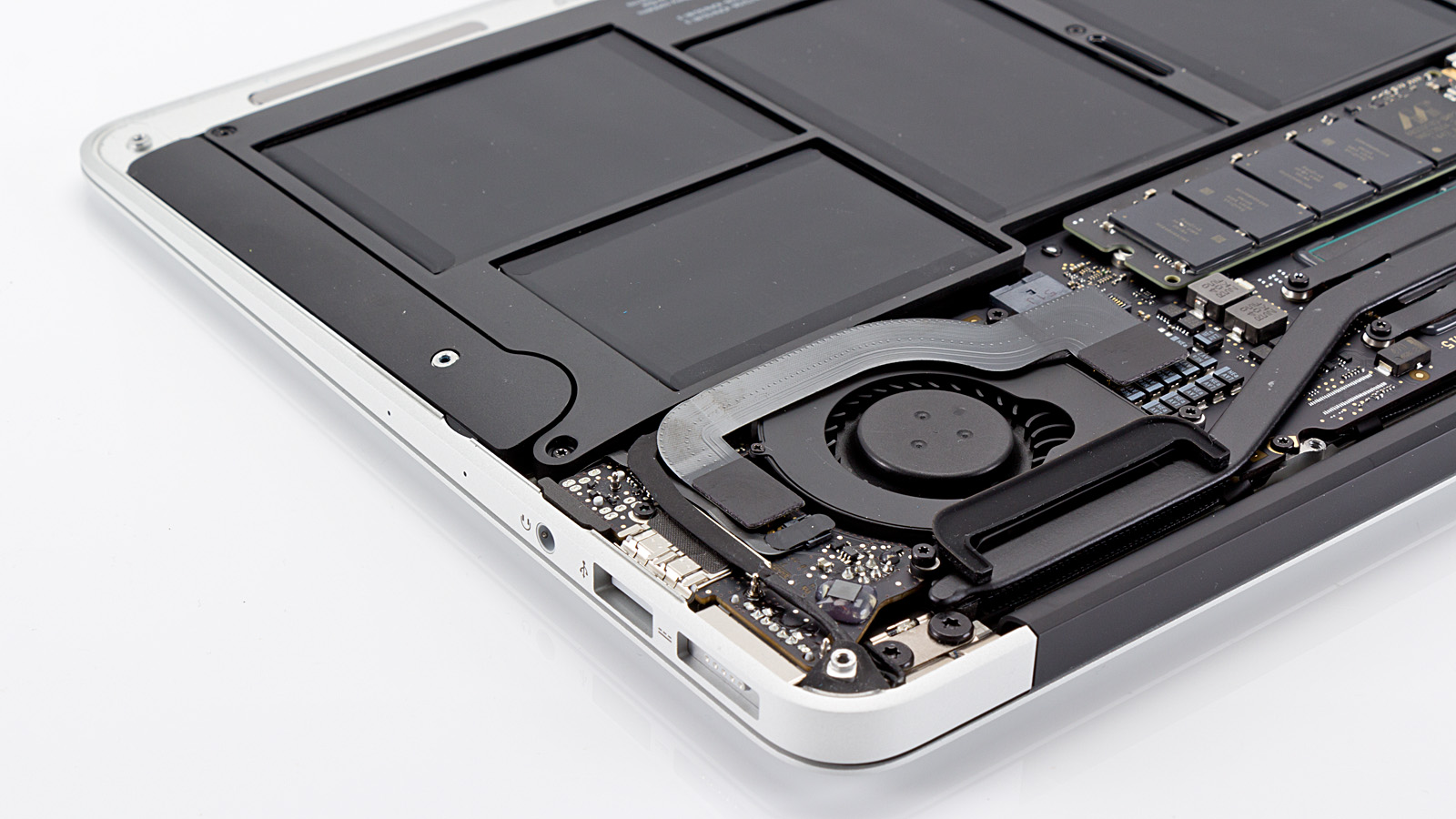 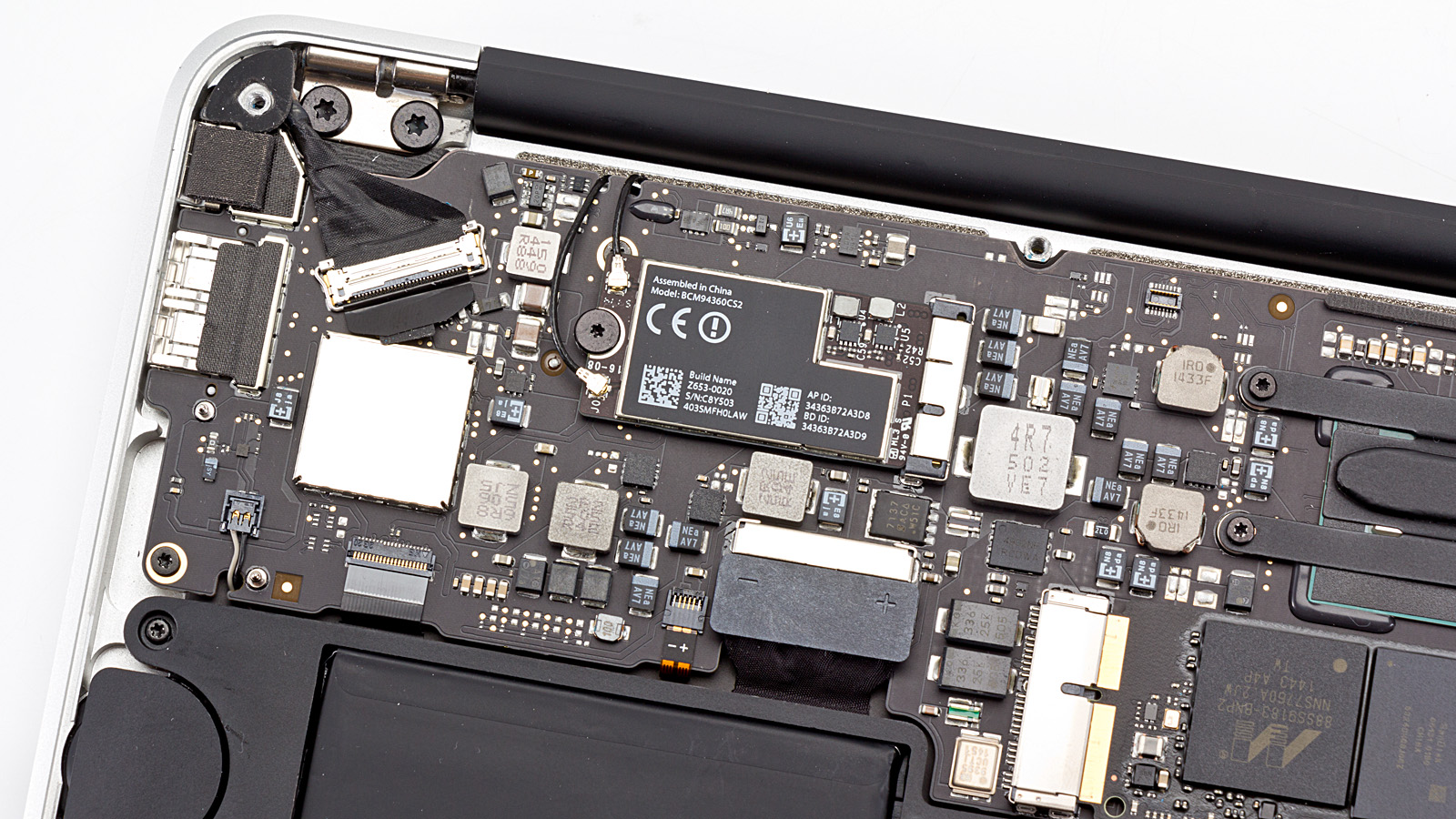 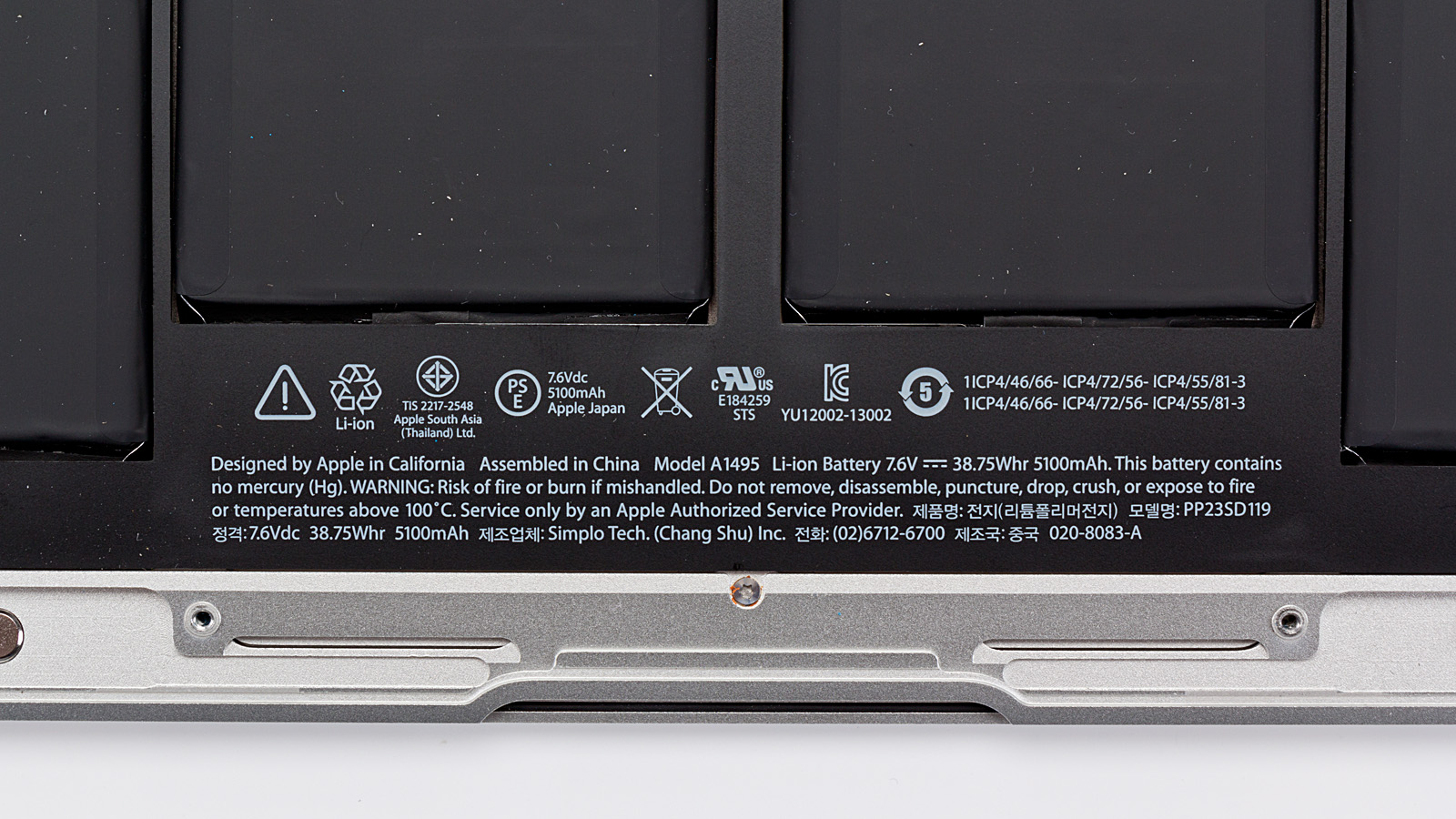 The standard processor for all MacBook Air models is now the 1.6 GHz Intel Core i5-5250U, a low-power variant from the dual-core Core i5 mobile processor range that has become almost standard issue across all kinds of laptops. We tested a MacBook Air sample with this chip and its integrated Intel HD Graphics 6000, with 4GB of memory and 128GB flash drive.

The processor and memory performance of the 11.6-inch Air is effectively the same as the 13.3-inch model, with some tiny variations in benchmark scores due to inevitable fluctuations in speed from intelligent monitoring adjusts operation with ambient conditions.

The updates to the processor and graphics setup should produce appreciably stronger real-world performance in both general tasks and gaming – in areas where processing speed or graphical power are the limiting factor, at any rate. You’ll be able to run a higher (or more processor-intensive) calibre of software on this machine than on last year’s, although those who just wish to surf the web, tap out emails and write the odd essay may not care too much about that.

The increase in baseline processor clock speed for the starting configuration looks minor – from 1.4 to 1.6GHz – and anyone pondering an upgrade from last year’s model shouldn’t expect the Air to be transformed into a powerhouse. But this small bump is potentially more significant than the MacBook Pro’s increase from 2.4 to 2.6GHz because in lower-specced machines processing power is more likely to become the performance bottleneck.

And as with the 13-inch MacBook Air, we found real-world gaming performance to be slightly behind the comparable models tested in April of last year.

Given the superior-looking specification of the new Intel chip’s integrated graphics (if only subtly), we suspect the slower graphical speed of today is due to either the change from Mavericks to Yosemite, some internal power-saving clock management that Apple applies to the new processor; or perhaps simply the loss of 50 MHz in peak graphics memory clock speed that’s found when comparing this year’s Intel HD Graphics 6000 to last year’s 5000.

But as with the 13-inch Air, we found results from Cinebench’s OpenGL render test that showed the integrated GPU in a slightly better light. Version 11.5’s score went from 22.2 to 24.4 fps (10 percent higher); and version 15 allowed a clearer distance to be put between MacBook generations – from 18.5 to 25.9 fps (40 percent framerate increase).

The fact remains, though, that unless you dial down resolution and detail to minimums, the MacBook Air is not a laptop that can yet take on modern action gaming. 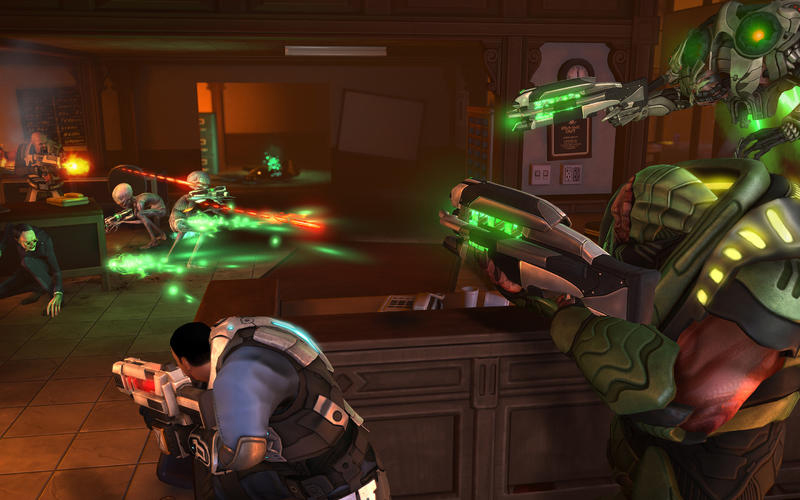 For internal storage, the 11-inch MacBook Air has the same component specification as last year, either a 128 or 256 GB flash drive (with 512 GB available as a CTO option).

Our sample had the standard 128 GB capacity, with a drive made by SanDisk. (Samsung and Toshiba are also known to be OEM suppliers of flash storage for Apple Mac computers.)

This is a PCIe-attached device, using two PCIe 2.0 lanes to break through the SATA speed ceiling. We measured 181 and 138 MB/s for random read and writes, when averaging the transfer speed of data sized from 4 kB to 1024 kB.

While this trails the startling 450 and 503 MB/s we saw from the 13-inch Air random small-file benchmark, be assured that speeds above 100 MB/s alone in this particular test bode very well for overall system responsiveness.

Top sequential speed from the SSD reached 754 MB/s for reads, and 316 MB/s for writes, the former figure especially entirely unheard of from a single laptop storage drive, before the ground-breaking revision was made in 2013’s MacBook Air.

But where the new 13-inch model showed little measurable difference, our 11-inch sample comfortably exceeded its predecessor’s lifespan. Last year we noted 10 hr 11 min in our battery stamina test playing an HD film over wireless. This year the new 11-inch kept on looping for 13 hr 28 min, a runtime more in line with expectation given the mooted gains from the Broadwell processor.

Like all of Apple’s current Macs, the 11-inch Air comes with OS X Yosemite pre-installed. If you wish, you’ll be able to upgrade to OS X 10.11 when it launches later this year, and if the past two years are anything to go by, this upgrade will be free.

The early-2015 MacBook Airs are available right now: you can order from Apple’s website, Apple Stores or Apple resellers. We haven’t heard any reports of stock shortages, either. 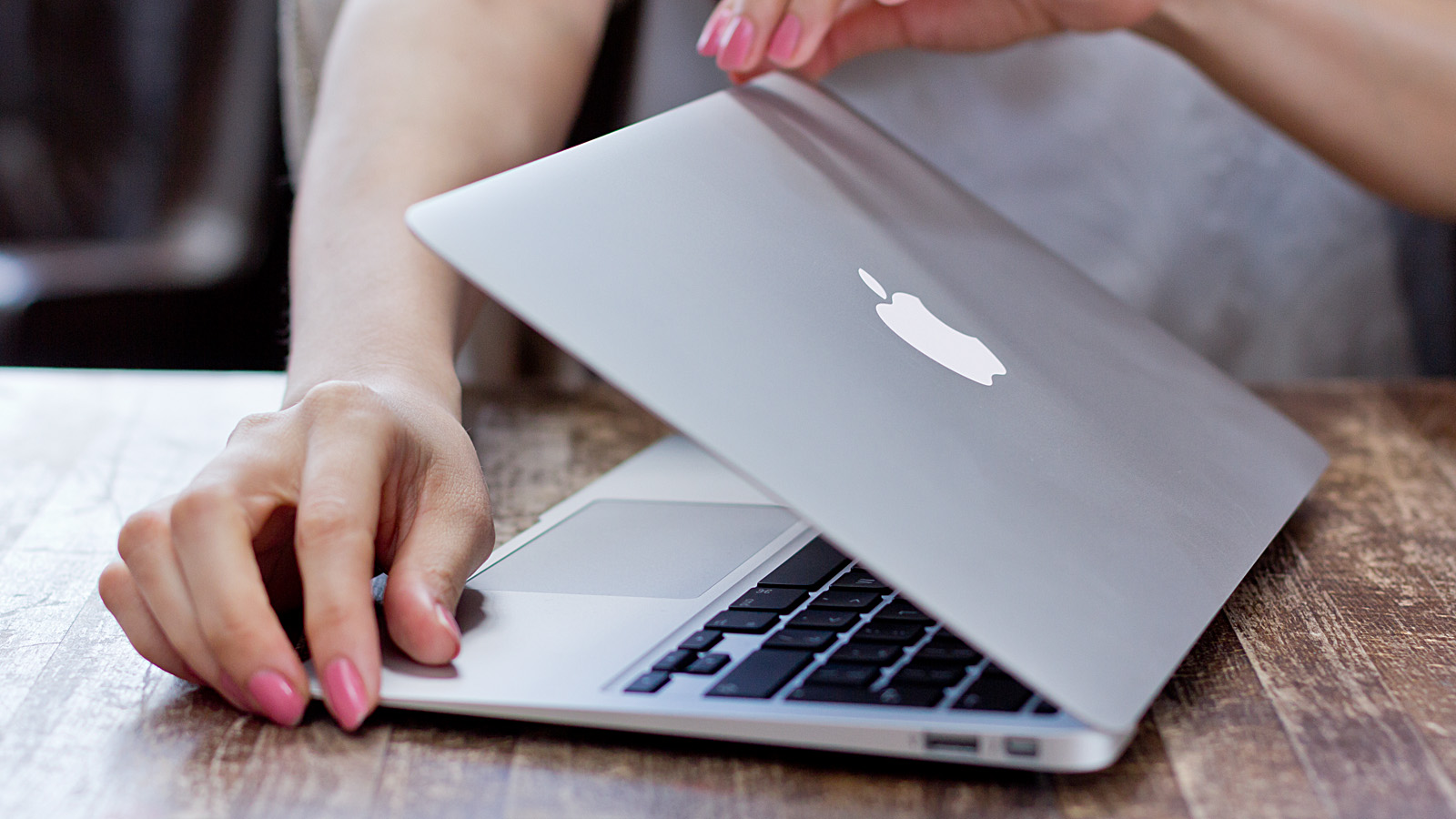 The 11-inch MacBook Air is available in two off-the-peg configurations, differing only in the allocation of flash storage. We’ve put links to the Apple Store below, so you can see more detailed specs and buying options and buy them, if you wish. You’ll be able to make further customisations to the spec (adding extra storage and so on), so click on the version that’s closest to the machine you want, then select changes to the spec as you wish. Apple’s buying process is very user-friendly. 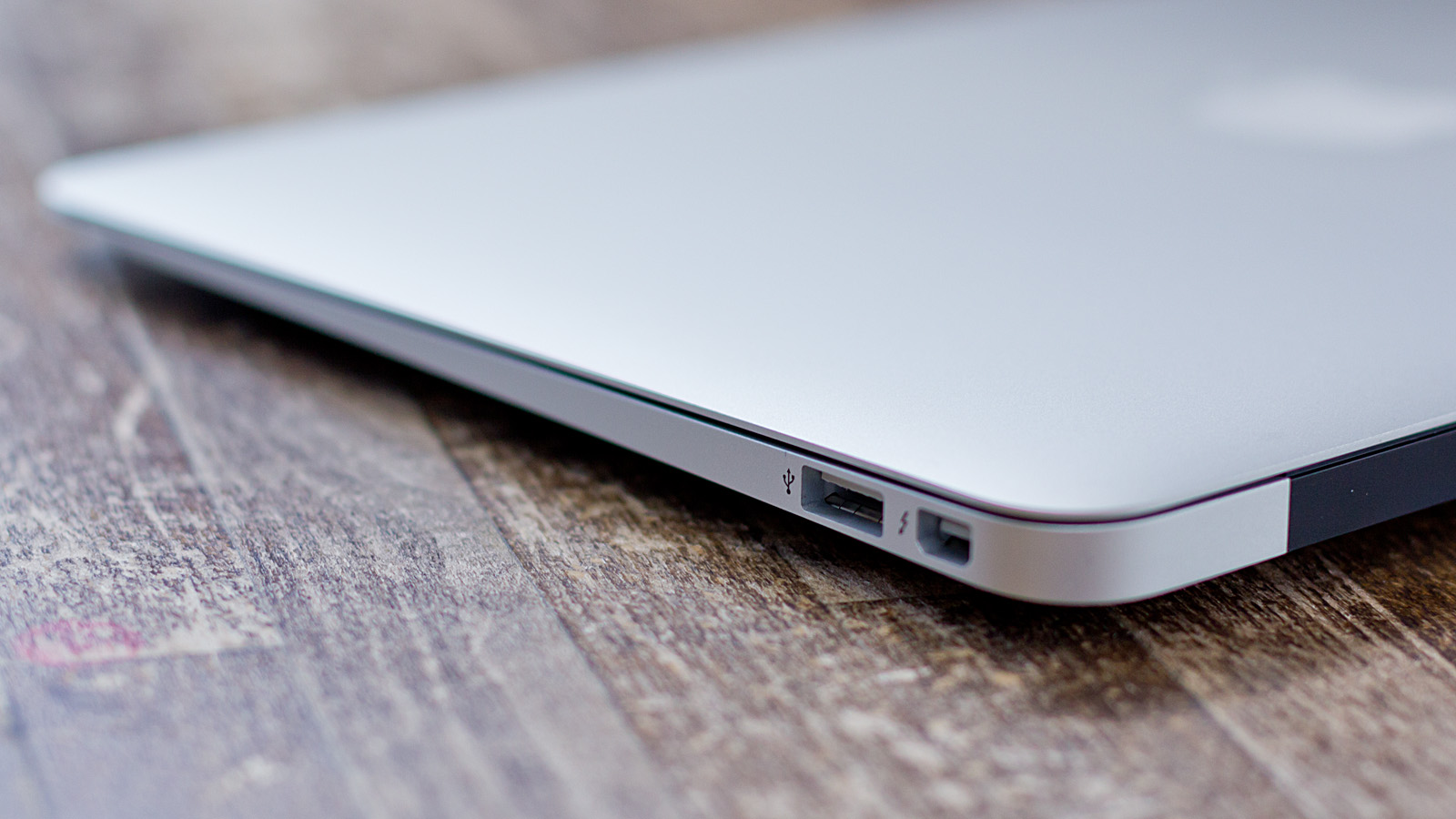