You can purchase an Apple Watch for roughly the same price as you can the Huawei Watch, so although the Apple Watch can get much more expensive, we don’t think either product really wins on value. Both are built well, and designed beautifully. So one of the key differences is a circular fascia over Apple’s square face – which is a question of traditional watch design vs functionality. Other than that, if you are an iPhone user you should choose the Apple Watch. And for Android fans the Huawei Watch will be a good purchase.

Here at Macworld we are committed iPhone users, and we are very excited about the launch of the Apple Watch. But as is so often the case with Apple products, Apple is not the first to make a smartwatch. Far from it. Indeed, Android Wear devices no proliferate. So we have decided to compare one of the best – the Huawei Watch – with our own beloved Apple Watch.

To be entirely clear: if you are an iPhone user the Apple Watch is the only smartwatch that works for you, right now. But that may change in time, and it is always good to know what the opposition has up its sleeve. Here then, is our Apple Watch vs Huawei Watch comparison. For more news about the Apple Watch, read our Apple Watch release date, price and specs article.

At the time of writing Huawei hasn’t officially released details on where the Huawei Watch will launch, when you can get it, or how much it will cost. You can definitely get it in the UK because MobileFun has the device up for pre-order. The retailer is expecting stock in 3-5 days.

As we expected, the Huawei Watch will cost £300. This matches a number of rivals, but is slightly misleading. That basic £300 price is only for the black and the silver models. If you like a bit more bling then the gold option will set you back a little more at £350. 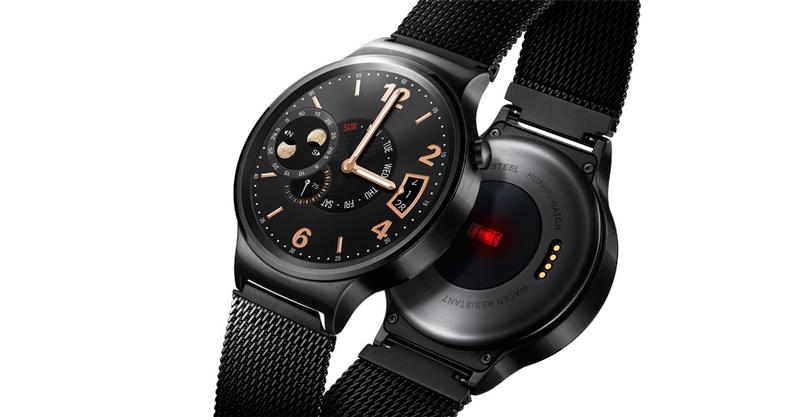 Apple’s cheapest model is bound to be the most popular, but prices soon scale up and there are lots of optional extras. You can spend more by opting for the Apple Watch Edition which starts at £479. The most expensive Apple Watch is £13,500.

So there is parity of pricing when considering the Apple Watch and the Huawei Watch. But you can spend a lot more on the Apple Watch should you so desire. Should you? (See also: Apple Watch vs LG Watch Urbane smartwatch comparison.)

One thing you know with Apple: design will be a key consideration, and build quality superb. Indeed, since the initial introduction of the Apple Watch last year, we’ve seen a number of rival manufacturers bring more luxury to their Android Wear smartwatches. Whatever you think of Apple, when it enters a market its rivals up their game or get out.

The Huawei Watch is certainly a classy design. Round rather than the square Apple Watch, the Huawei Watch has more of a classic wristwatch design. It comes in three colours: silver, black and gold plus the choice of either leather- or stainless steel straps.

That is a reasonable amount of choice, but watches are very personal devices, and Apple has beaten off all the opposition with an array of 38 different combinations of body and strap.

Unlike many other wearables (although not the Microsoft Band) the Apple Watch is available in multiple sizes. In this case two: 38- and 42 mm height. This is a clever move that will suit anyone who doesn’t fancy a giant smartwatch on their sticklike arm.

The Huawei Watch comes only in a 42 mm diameter, and the watch body itself is a little chunky at 11.3 mm. The Apple Watch is a little thinner at 10.5 mm and varies on weight depending on the model but the smaller model is 40-55 g while the bigger case is 50-69 g.

You have a much better chance of finding an Apple Watch that suits than you do of sourcing a perfectly fitting model of almost any other wearable.

We can’t separate Apple and Huawei in terms of the materials used in construction. In both cases we find premium materials including stainless steel and sapphire crystal glass. And if you have money to burn you can upgrade to Apple’s 18-carat rose and yellow gold models.

Both smartwatches use touchscreens as their main interface, but you can interact with the Apple Watch using the digital crown which sits on the right side of the device. Huawei just uses a more simple on/off button which is also on the right but at the 2 o’clock position. In principle this makes it easier to find and press.

By comparison Apple uses its own S1 chip and has double the amount of storage at 8 GB. However, as it stands you can only use 2 GB for music and just 75 MB for photos. As usual, Apple doesn’t quote RAM.

Don’t expect anything other than premium performance from either of these devices, however.

Also present in both the Apple Watch and the Huawei Watch: a heart rate monitor and an accelerometer to track activity. Both also use Bluetooth to connect to your smartphone and feature onboard Wi-Fi.

One key differentiator between the Apple Watch and the Huawei Watch is the different displays: do you want a round face or a square face?

Resolution is different, too. The Huawei Watch’s is 400 x 400, which makes it roughly 286ppi in terms of pixel density (it’s not square, of course, so you don’t get all of those pixels).

Apple simply describes the resolution of the square Apple Watch’s display as ‘Retina’. Thanks Apple. 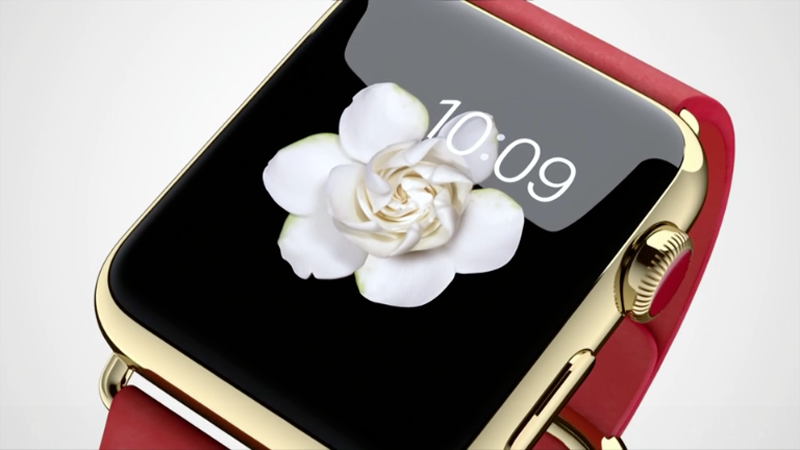 So that is a win for Apple, although we doubt anyone can actually tell the difference in terms of pure sharpness. Ultimately the competition is between a more watch-like round display, which is typically more aesthetically pleasing, or the Apple Watch’s arguably more practical square screen.

The choice is yours.

This is a tricky one, and in truth we won’t know the true verdict until we have used both watches for a good chunk of [coughs] time.

In terms of battery life, Apple touts up to 18 hours of varied use which drops to 6.5 for audio playback and just 3 for phone calls. The Huawei Watch will last longer, according to the firm, with one and a half to two days usage.

Ultimately, if you can use your watch for a day and then comfortably charge overnight, that will be okay. The first full-spec smartwatch that lasts for a week will be the first one to really hurt all the Fitbits and JawBones of this world.

This, then, is the killer difference between the two smartwatches. For the iPhone user, the Apple Watch is the obvious choice of smartwatch. The Apple Watch will work only with iPhones, and the Huawei Watch is compatible only with Android devices as it runs Google’s Android Wear.

(Google is reportedly working towards adding iOS support to Android Wear. It will probably happen at some stage, and in a reversal of the OS X/Windows situation I would bet that you are much more likely to be able to pair Android Wear with your iPhone than you will ever be able to use an Apple Watch with anything other than an iPhone. But for now, the choice is clear.)

The functionality of each is similar, but the information is presented in a very different way. Android Wear uses a card-style system to provide notifications and various bits of data such a weather, and number of steps. 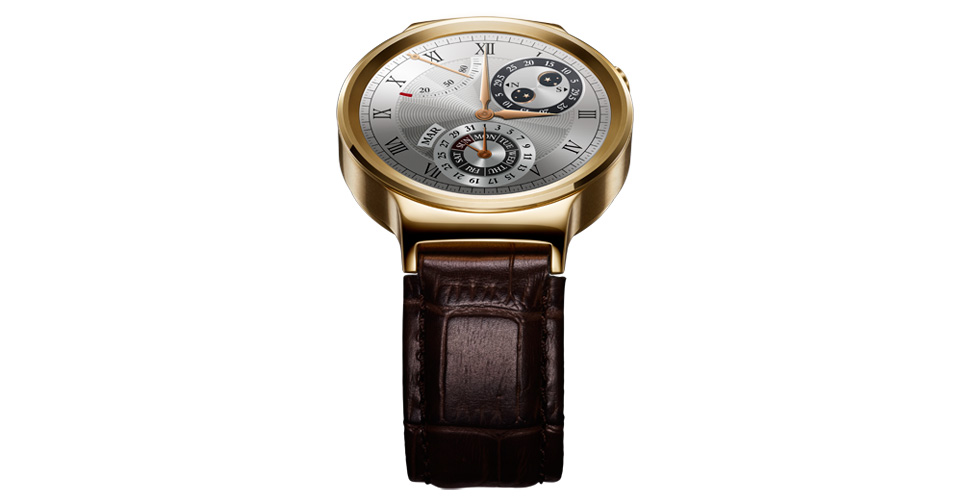 You can also interact with ‘Okay Google’ with voice to send messages or ask questions. You can also control music playback on the connected smartphone and the camera shutter.

Something both the Apple Watch and the Huawei Watch share is the ability to install apps like you would on a smartphone or tablet. There are many for Android Wear and while there may be less for the newer Apple Watch system it will quickly go up after launch.

The Apple Watch can do everything Android Wear does, providing notifications to the device over Bluetooth and built-in apps include Messages, Phone, Mail, Calendar, Activity, Workout, Maps, Passbook, Siri, Weather and Photos. You can also use the Apple Watch to make payment and with certain partners check into flights, hotel rooms and the like. We have more information about the apps available on the Watch here.

The likelihood is that the Apple Watch will gain traction quicker than will Android Wear, and therefore the app support will be better. But at this stage that is pure speculation. The truth is, if you are an iPhone user and you want a smartwatch, the Apple Watch is where it is at.