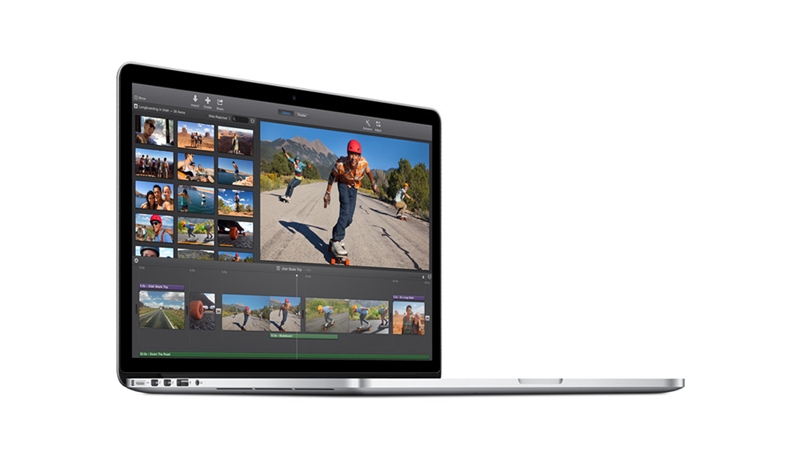 For many tasks there will be little difference in performance if you have to choose between the two versions of MacBook Pro (Retina, 15-inch, Mid-2014). Both have the same 16 GB memory complement now, and while processor benchmark tests favoured the faster clocked model, the differences are only a few percent in point scores. A welcome surprise is just how good the Iris Pro graphics chipset can prove to be when playing action games, with this integrated version even playing slightly faster in some titles. We did note, however, that the fan ramped up to higher and noiser speeds with the Iris Pro graphics model; perhaps thermal management is more challenging when all your processor eggs are concentrated in one rapidly heating basket. With the same storage performance from the small 256 GB, and usefully longer battery runtime, the case for choosing the cheaper MacBook Pro becomes stronger again. But if you can hold out for the anticipated 2015 model, expect to find even further improved battery life, a Force Touch trackpad and quite probably significatnly improved graphics, should Apple select a discrete graphics processor from Nvidia’s lauded GTX 900 series.

The 13-inch MacBook Pro with Retina display was blessed with a great upgrade this spring, acquiring a new Force Touch trackpad and Broadwell-series Intel processor (read: New 13-inch Retina MacBook Pro (early 2015, 2.7GHz) review. The 15-inch meanwhile remains the same as when updated in June 2014 (read: New 15-inch MacBook Pro with Retina display release). All the signs suggest that Apple is waiting for a new quad-core processor to power its flagship notebook, but that wait must continue as long as Intel is unable to supply the necessary 14 nm quad-core Core i7 chips.

Until new models do appear, the current MacBook Pro (Retina, 15-inch, Mid-2014) remains a worthy contender when set against any available challenger in spring 2015. The review I wrote last year convered the top of the two MacBook Pro versions available, so now here’s the entry-level model, with 2.2 GHz Intel Core i7 processor, priced at £1,599.

Read our Which Mac Buying Guide

The most affordable 15-inch MacBook Pro has the same chassis, screen and port specification as the best MacBook Pro with discrete graphics.

It differs in three respects from the £1,999 model – central processor speed, storage capacity, and its single rather than dual graphics processors.

The best model includes an Intel Core i7-4870HQ which has a baseline clock speed of 2.5 GHz and Turbo provision up to 3.7 GHz. This entry-level model has the Intel Core i7-4770HQ, specified at 2.2 GHz and able to reach up to 3.4 GHz in short-term Turbo mode. Both chips include the same Intel Iris Pro 5200 graphics, but the chips otherwise list the same specification – 47 W thermal design power (TDP) and 6 MB Level 3 caches shared across the four cores.

The standard storage capacity of the MacBook Pro’s flash drive is 256 GB for this version, half that of the best model’s 512 GB; but they’re both based on the same fast technology of two-lane PCI Express direct attachment.

For graphics, this version relies solely on Intel integrated graphics. Fortunately, this component is much faster than the usual on-chip graphics engine found in Intel Core series chips. With the help of additional local video memory cache on the same die, we found the cheapest MacBook Pro with Retina display is capable of playing games with better detail level and framerates. 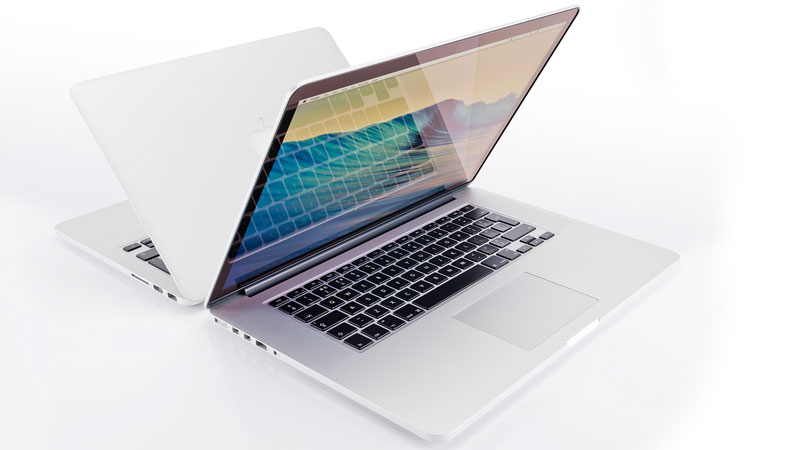 Let’s start with those graphics. The biggest surprise may be that, for certain games at least, the integrated graphics seem to perform better than Nvidia discrete graphics.

Faced with Tomb Raider 2013, the top model with its Nvidia GeForce GTX 750M graphics could average 56 fps when set to 1280 x 800 pixel resolution and Normal detail. The entry MacBook with Iris Pro graphics played the same test at 59 fps, and could still sustain a 46 fps average after moving up to High detail. That’s with the game set to use legacy OpenGL.

The default for Tomb Raider on OS X is a newer version of OpenGL, and here the Iris Pro graphics proved less capable. At 1440 x 900 resolution and Normal detail, the Nvidia model averaged 33 fps while Iris Pro graphics dropped to 17 fps. (Restoring legacy OpenGL mode here did allow the Iris Pro MacBook Pro to reach back up to 40 fps.)

In Batman: Arkham City, the Nvidia MacBook averaged 61 fps (High detail) but the Iris Pro graphics version pushed its average up to 68 fps. Stepping up to 1440 x 900 resolution, the Iris Pro model again pulled ahead with 66 and 60 fps at Medium and High detail respectively; the Nvidia model returned slower results of 57 and 50 fps.

Turning to workstation benchmarks, we found that Cinebench 11.5 results were almost the same between MacBooks – Nvidia returning 48 fps and Iris Pro 49 fps. But the more recent Cinebench 15 showed a clear gap, in Nvidia’s favour: 54 fps versus 32 fps.

With a 300 MHz difference between processor speeds, we would certainly expect a measurable change in performance. But while the 2.5 GHz clock speed drops by 12 percent to arrive at 2.2 GHz, the performance delta is a little reduced so benchmark results of the 2.2 GHz model were somewhat closer to the 2.5 GHz model.

With the same type of flash drive in each (both from Samsung in our particular samples), we weren’t too surprised to find that storage speed is effectively the same for the two models; one with 512 GB, the other 256 GB. While the speeds look almost pedestrian compared to what’s now available from the 13-inch models of MacBook Pro and MacBook Air, make no mistake – the 2014 MacBook Pro with 15-inch Retina display is still incredibly quick in solid-state technology.

The headline sequential read speed of both models was around 785 MB/s, and write speed not far behind at around 730 MB/s. Looking at small-file random read/write speeds, the QuickBench test for data from 4 kB to 1024 kB gave averaged results of around 200 MB/s random reads and 350 MB/s random writes.

We compared battery test results between the two current version of 15-inch MacBook Pro, and found a slight advantage to the slower clocked model. In our standard battery benchmark test looping an MPEG-4 film over Wi-Fi with screen set to 120 cd/m^2, the 2.5 GHz model lasted 7 hr 57 min, while this 2.2 GHz MacBook lasted nearly an hour longer, running for 8 hr 48 min.