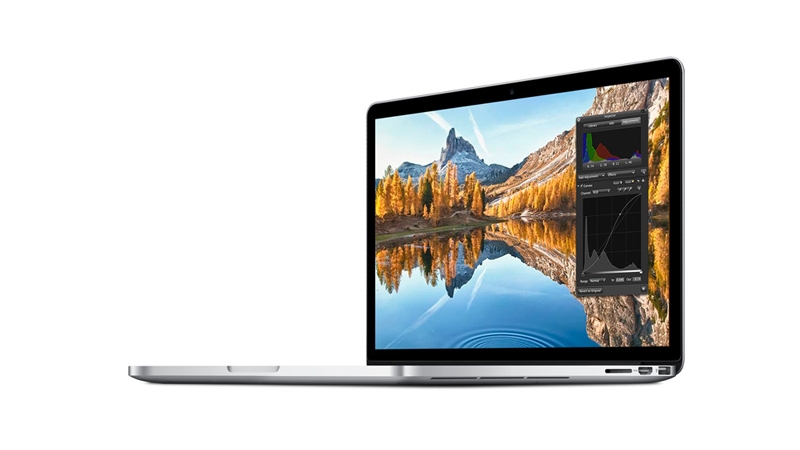 In last year’s line-up, moving from entry to middle models of the 13-inch MacBook Pro with Retina display meant gaining more memory and more storage. With this year’s range, it will cost you £200 just to add another ‘128 GB’ (actually a change from 121 GB to 250 GB). With that extra capacity in this middle model can come a near doubling in write speed though, which may prove very useful in some applications.

When Apple makes MacBooks, it tends to do so in threes. This provides a choice of products pre-configured with better specification as price increases. In marketing terms these may be described as ‘good’, ‘better’ and ‘best’. You could also view them as entry-level model – the basic version to get you started at the lowest price – and at the top, the top or flagship model with best components and all available features.

The largest differences in such a series is clearly between entry and flagship versions, with fewer changes to be found between entry and middle, for instance. And in the case of the Early 2015 revisions to the 13-inch MacBook Pro with Retina display, there is only one single difference between entry and middle. That difference is the storage capacity, not normally a reason to review the middle version as a separate product. But while we were waiting to get the flagship 13-inch with 2.9 GHz processor to the test bench, that’s exactly what we did, since there is something a little more than a matter of storage space to separate them.

Read our Which Mac Buying Guide

Let’s recap what goes into the latest 13-inch MacBook Pro with Retina display. This is the smaller of two available screen sizes, appreciably lighter and more compact than its 15-inch brethren, taking a Core i5 dual-core processor from Intel’s latest Broadwell chip series.

If you work in professional creative media, scientific research or just enjoy a spot of computer gaming, you can put those powerful graphics engines to good use in the 15-inch MacBook. If you don’t have such requirements, or you’re watching your weight or pennies, the 13-inch may be all you need.

Changes made to this year’s version of the 13-inch are focused on three areas – processor update to Broadwell with its newly shrunk 14 nm silicon, new all-electric Force Touch trackpad, and upgraded four-lane PCIe storage technology.

The entry-model we tested in the above review featured 8GB of memory and 128GB flash drive. By spending an extra £200 beyond this cheapest machine’s £999 price, all that you gain is an upgrade in storage, with no movement in memory. (If you need more RAM today or just want to add a degree of future-proofing for tomorrow, the premium to get 16GB of memory is currently £160 for all three 13-inch models.)

So we have the same 2.7GHz Intel Core i5-5257U dual-core processor, the same Intel Iris Graphics 6100, and the same notebook chassis with its two Thunderbolt 2 ports, sublime Retina display, the Force Touch trackpad and all. 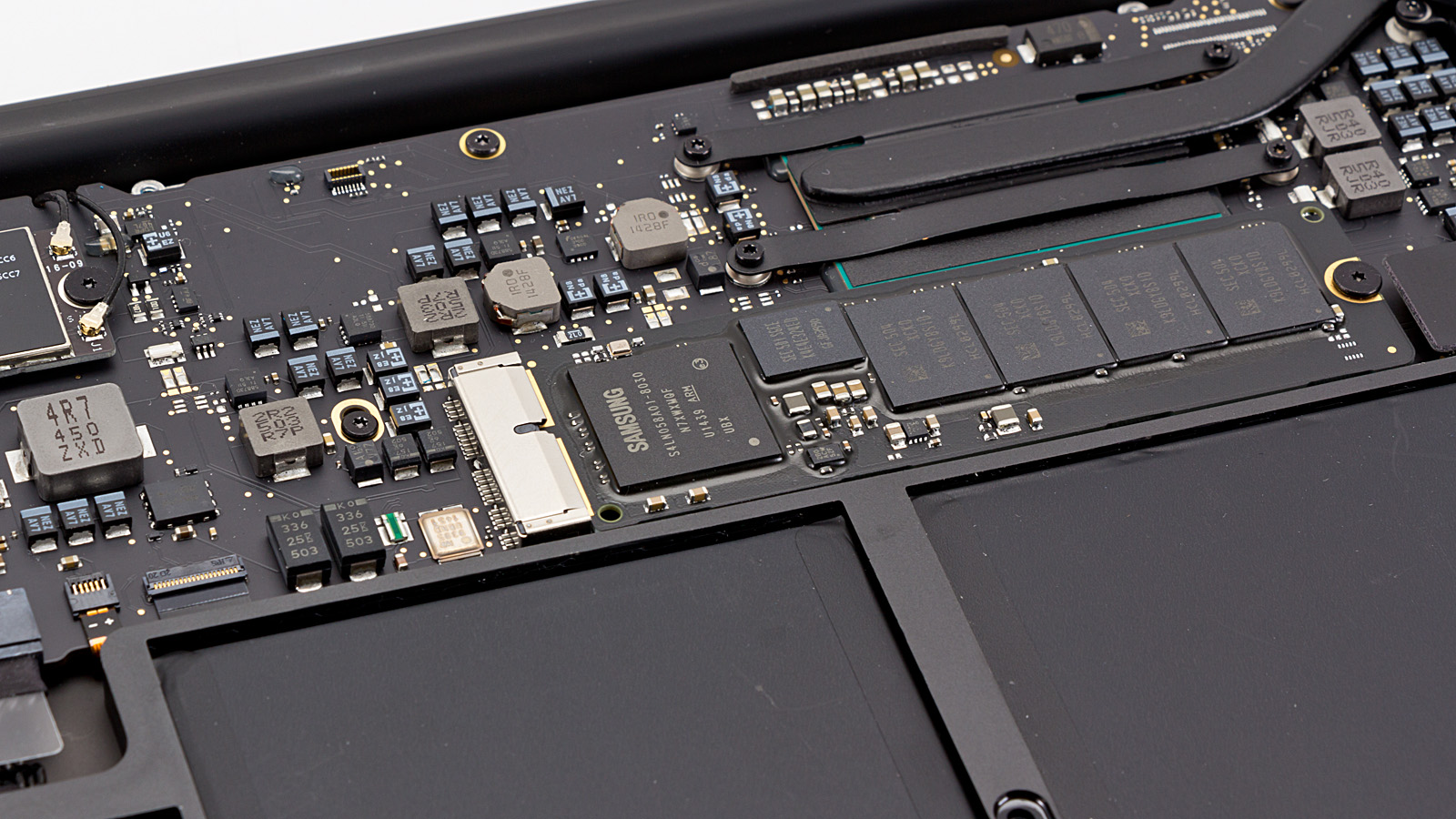 In the case of this middle MacBook Pro, the internal flash drive in our sample was a Samsung-made SSD using four lanes of PCI Express. That contrasts with the previous generation that used two lanes; and is now a world away from most of the Windows PC industry which is using comparatively snail-like Serial ATA (SATA).

Note however that the MacBook Pro is still based on the advanced host controller interface (AHCI), where the new 12-inch MacBook is using a new NVM Express specification for its PCIe-attached flash drive.

Capacity for the middle model is advertised as 256GB – and that is real gigabytes, rather than the gibibyte system still indicated in Microsoft Windows – although mysteriously only 250GB is available to the computer. Even allowing for the hidden EFI (200 MB) and Recovery HD (650MB) partitions, there’s still around 5GB left unaccounted for.

If we had to guess, the missing space is used for some undocumented over-provisioning of the SSD volume, in order to assist with NAND flash longevity. But this goes against the grain of SSD manufacturers that always quote available space after over-provisioning. An example is the ‘240GB’ sized SSDs sold by many brands that internally comprise 256 GB-worth of flash chips but which have 16 GB capacity in this example reserved for over-provisioning; a means to keep fresher blocks of memory in reserve to maintain overal  longevity and performance.

The surprise in the middle MacBook Pro is not the missing capacity which has been an issue before this notebook arrived – although we’d dearly like to know what happened to it (and are surprised there’s been no class-action lawsuit in the US yet for false advertising). But the surprise for anyone not familiar with the technology is the increase in performance found when moving from 128- to 256GB. Or from 121- to 250GB, if we wanted to express available capacities here more accurately.

With the entry-level MacBook Pro and its 128GB flash drive, we measured sequential read speeds of 1500MB/s and sequential write speeds at up to 681MB/s. There’s a large discrepancy between reading and writing here, usually explained as a reduction in the level of parallelism available to smaller capacity solid-state drives.

From the 256GB MacBook, we found that write speeds now closely approached read speeds. To wit, sequential write speed now reached up to a maximum of 1424 MB/s, with averages of 2–10MB files of 1353MB/s; and an average speed of 1231MB/s for 20–100MB data (all measurements with QuickBench).

Here’s one use scenario: you would like to copy a 25GB video file from a fast external storage drive (and to keep up with the internal flash drive performance, we are now only talking about a Thunderbolt-connected disk array or fast SSD system such as the LaCie LBD 2).

Using the 128GB flash drive in the entry model, and assuming a 650MB/s average write speed, the process would take around 38 seconds.

With the new 256GB flash drive in the middle model, and writing at an average of 1250MB/s, you would have to wait just 20 seconds.

So this may look more like a first-world problem, especially since to take advantage of the added write speed you would need some particularly fast external Thunderbolt storage.

What about at the small-file level though, which impacts normal operation of a computer with the saving of user files and background housekeeping activities?

Here we found the two drives were performing the same in single-threaded operations, up to a file size of 64 kB, where both were capable of random writes at around 790MB/s. But where the smaller 128GB drive would then drop to around 680 MB/s at 256kB files, then plateau for all subsequent file sizes, the 256GB drive kept rising in speed to the best 1200+ MB/s write speeds we measured with the largest files.

This suggests that you will not experience any difference in speed when it comes to launching and exiting application, or opening and closing (most) files. But in the edge cases where you need to write large files to the MacBook’s internal drive and you can deliver that data quickly enough, it’ll only take around half as much time. Remember though, even the 128GB flash drive will still scorch off any regular SATA SSD in this respect.