Although boosted by invaluable features and a new look – the greater consistency between OS X and Windows editions will make things easier for many – Excel for Mac 2016 remains the poorest performer in the otherwise solid Office 2016 offering. Some will find it interminably slow at handling even moderately complex spreadsheets. Unless you desperately need the new features we recommend you stick with Excel 2011 for the near future.

As with all of the Office 2016 apps, arguably the biggest change in Excel 2016 is the neat look and feel. A ready-for- Retina-screens ribbon makes Excel 2016 for Mac feel more like the Windows version, while retaining a Mac distinctiveness. This comes at the price of the traditional formatting/standard toolbars disappearing although Excel 2016 for Mac retains the traditional main menu by which many of its functions can be accessed.

User interface changes are more than skin-deep. The pinch-expand gesture is now supported, for example, so you can zoom in and out of larger spreadsheets easily using a trackpad. Keyboard shortcuts used in the Windows version of Excel are now supported, which will aid PC switchers. 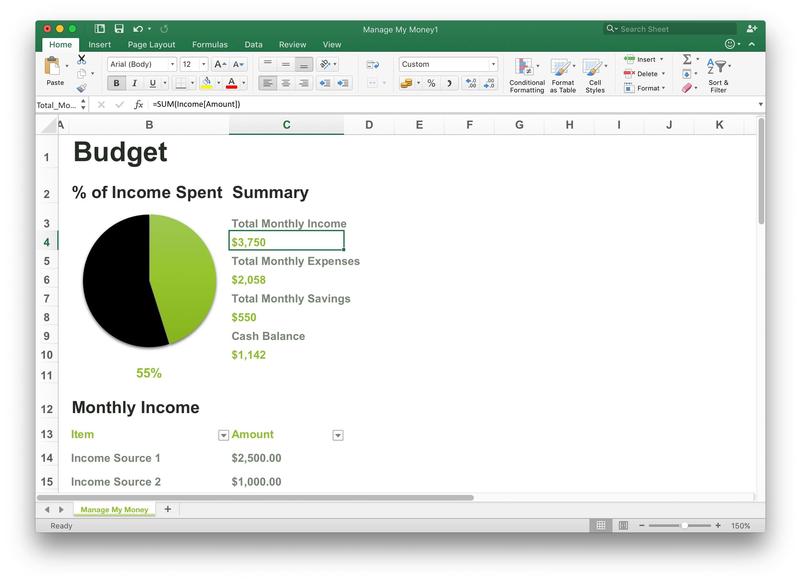 Excel 2016’s new look and feel really is rather nice, but the sliding cell highlight and smooth scrolling can be insanity inducing

Alas, it’s not all good. The cell highlight now slickly glides between cells but once the coolness factor wears off it becomes annoying. When combined with a new smooth scrolling experience within spreadsheets, accurately selecting a cell, row or column can be insanity inducing – and especially with the aforementioned trackpad. It’s like the spreadsheet is a skating rink. This sounds like a minor grumble but has a massive impact on usability.

Other new features include improved charting tools, with a Recommended button that will attempt to match the data you’ve selected with the best type of chart. The addition of PivotTable Slicers vastly improves the pivot chart abilities, allowing you to dig further into data with just one click, and a new Analysis Toolpak add-in, accessible from the Tools > Add-Ins menu, will delight engineers and statisticians (and leave the rest of us scratching our heads –  here’s more information if you want it). 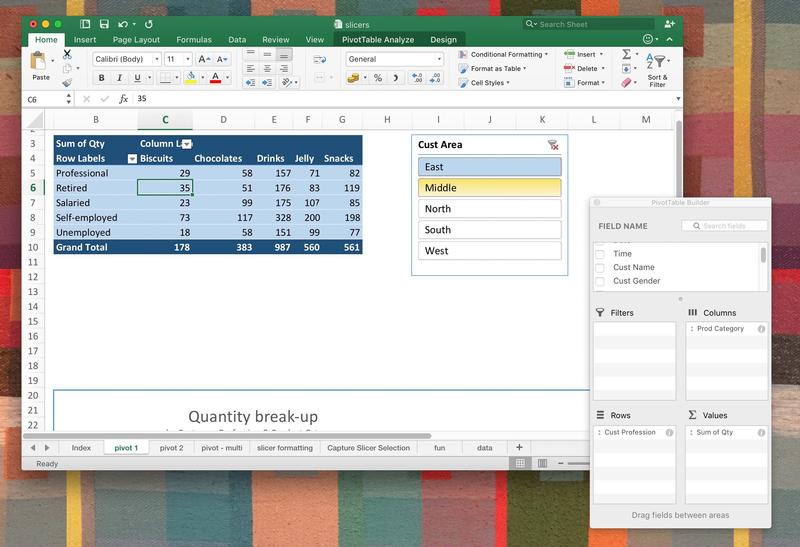 Excel 2016 now supports pivot slicing, allowing you to dig down deep into pivot tables with just one click

Sound good? Well, statisticians and other serious users might want to hold off upgrading just yet. For trivial calculations such as most of us undertake everyday – household budgets, for example – Excel 2016’s performance feels no different to that of the earlier 2011 release. Yet there are many unhappy individuals who find the newer version interminably slow with even moderately complex spreadsheets.

Entirely unscientifically, we benchmarked Excel 2011 and Excel 2016 using the older ExcelTrader benchmark from 2011 (the newer version failed to work in either version). This tests rapid graphical updating using stockmarket data. Excel 2011 completed the test in 14 seconds, while Excel 2016 took 1 minute 35 seconds, although it reported the document contained unsupported content.

Our testbed was the fastest MacBook Pro you can get but, whatever the case, this doesn’t actually make much difference because Excel 2016 is also single threaded, meaning it can’t fully exploit the extensive CPU power of modern Macs. To make things worse, all the main Office 2016 for Mac apps are 32-bit, rather than 64-bit, which fundamentally limits Excel’s number-crunching performance. (Windows users get to choose between 32- and 64-bit versions of the Office suite.)

Macros are a fact of life for many Excel users, especially in the corporate environment, where Visual Basic for Applications (VBA) is used. The VBA editor in Excel 2016 for Mac has been rebuilt from scratch and lost nearly everything in the process, reduced to little more than a bare editing window.

Microsoft refers to this as “simplified” and cheekily advises interested parties to create VBA macros and add-ins using the Windows version of Excel, before testing them in the Mac version. Obviously, if the Mac is your primary platform then this is unacceptable. The good news in that Microsoft has begun work to port the old editor from Office 2011. The bad news is that there’s currently no ETA. 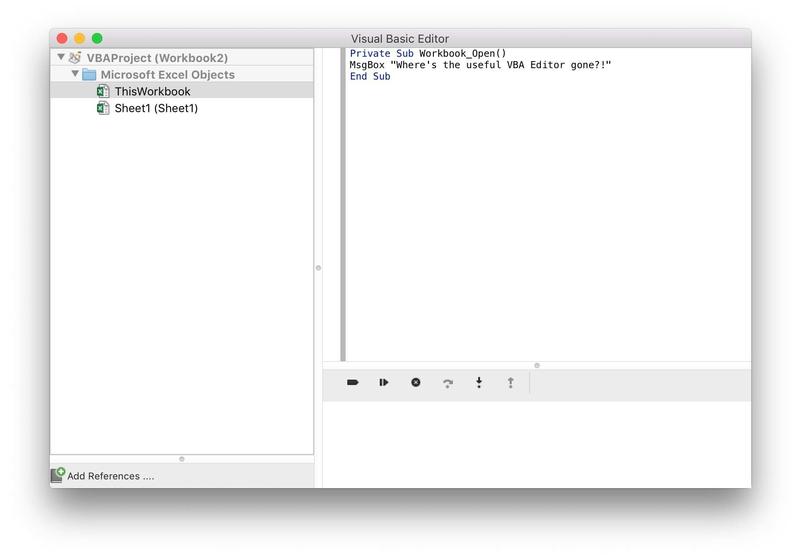 The massively cutdown Visual Basic for Applications Editor has drawn the ire of many, although Microsoft is working on a fix

Microsoft seems happy with this Real Soon Now approach to software development for all of the Office 2016 components but with Excel 2016 it’s particularly acute from the user’s perspective. To be fair, things do move rapidly. For example, in version 15.18 of Excel 2016, which we looked at and which was the current release at the time of writing, Excel 2016 had gained a selection pane by which you can better organise drawing objects (to view it, select an object, then click Selection Pane on the Shape Format ribbon). That’s a big feature to add eight months after the app was first released but, hey, let’s be grateful.

Indeed, it’s not at all clear if Excel 2016 will ever be “finished” and a quick search of Microsoft’s support forums reveals a growing list of features, directly requested by users, that – once again – will be here Real Soon Now. These aren’t exotic or fanciful requests. They request basic functionality, much of which was already present in the older Excel 2011.

Read next: Apple Numbers vs Microsoft Excel vs Google Sheets: Which is the best iPad spreadsheet app? 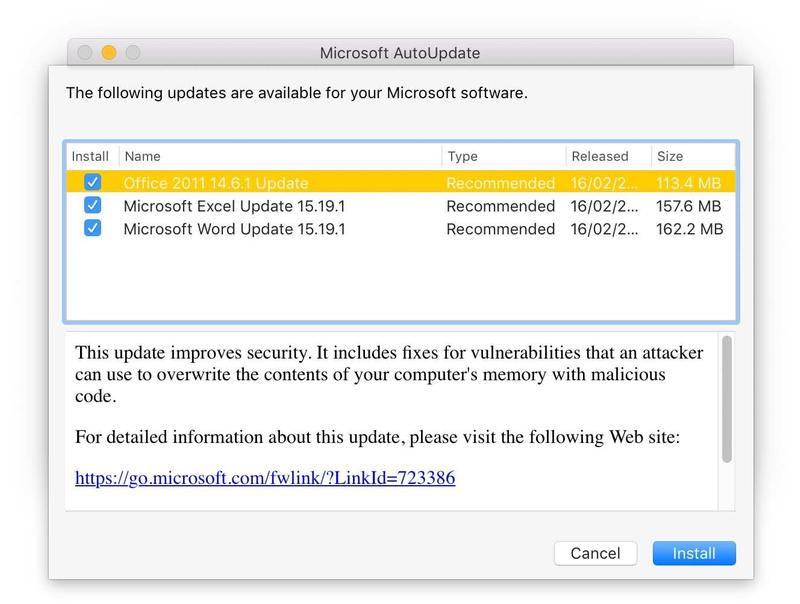 Get used to this screen because Microsoft is rolling out significant new feature updates as time goes on – but will Excel 2016 ever be actually finished?

If you pay monthly or yearly for an Office 365 subscription then upgrade worries are not a worry because you’ll get the next version for free, but those buying the Office 2016 boxed edition have reason to be concerned. At what point will Microsoft abandon the fundamentally unfinished Excel 2016 and turn its attention to the next release?

Not only does this rolling update cycle make users feel like eternal beta testers but it also means they’re frequently clicking Help > Check For Updates to find if a valuable new feature has arrived. This is worthwhile because the impetus seems to be to finally – after years of Excel for Mac being the underdog – of feature-matching the Windows release of Excel. This version of Excel gets a number of formulas once limited to Windows Excel, for example, which enhances spreadsheet compatibility.

If you’re feeling a negative vibe then, well, you’re not alone, and you may have already reached our conclusion. Unlike the other components of Office 2016 for Mac, which are largely solid, at the present time Excel is barely out of the gate. It might even turn out to be a non-runner. Many heavy users have resolved to simply avoid it.

Unless you desperately need the new features we have to recommend you stick with Excel 2011 for the near future. You can install and run Office 2011 alongside the Office 2016 without any issues, and Office 2011 comes as an option with an Office 365 subscription.