These criticisms can be set aside, however, because at its heart the new Outlook is a solid email app that’s surprisingly stable and usable in this early release. In terms of features it’s more of a sports car than the 4-wheel-drive off-roader of its Windows sibling, but this is perhaps no bad thing. For over a decade Apple’s own Mail app has veered consistently between frustration and usability, so the new Outlook’s light touch plus its blazing speed and decent core features are a much-needed breath of fresh air.

Increasingly a gem in the Office crown to rival big-hitters like Word, Outlook’s new-found performance is almost worth the price of admission alone. It’s like somebody’s squirted WD-40 into the older Outlook app. Put simply, there’s no longer any waiting around while you scroll through emails, or select messages buried deep in your inbox. Searching is also much faster, even on older Macs.

Wondering when the final version will launch? Keep up-to-date with the rumours at Microsoft Office for Mac release date rumours

The new Ribbon-only interface complete with blue status bar also looks good. It’s clean and there’s little trouble finding where features are, or finding out what’s Outlook is up to in the background. 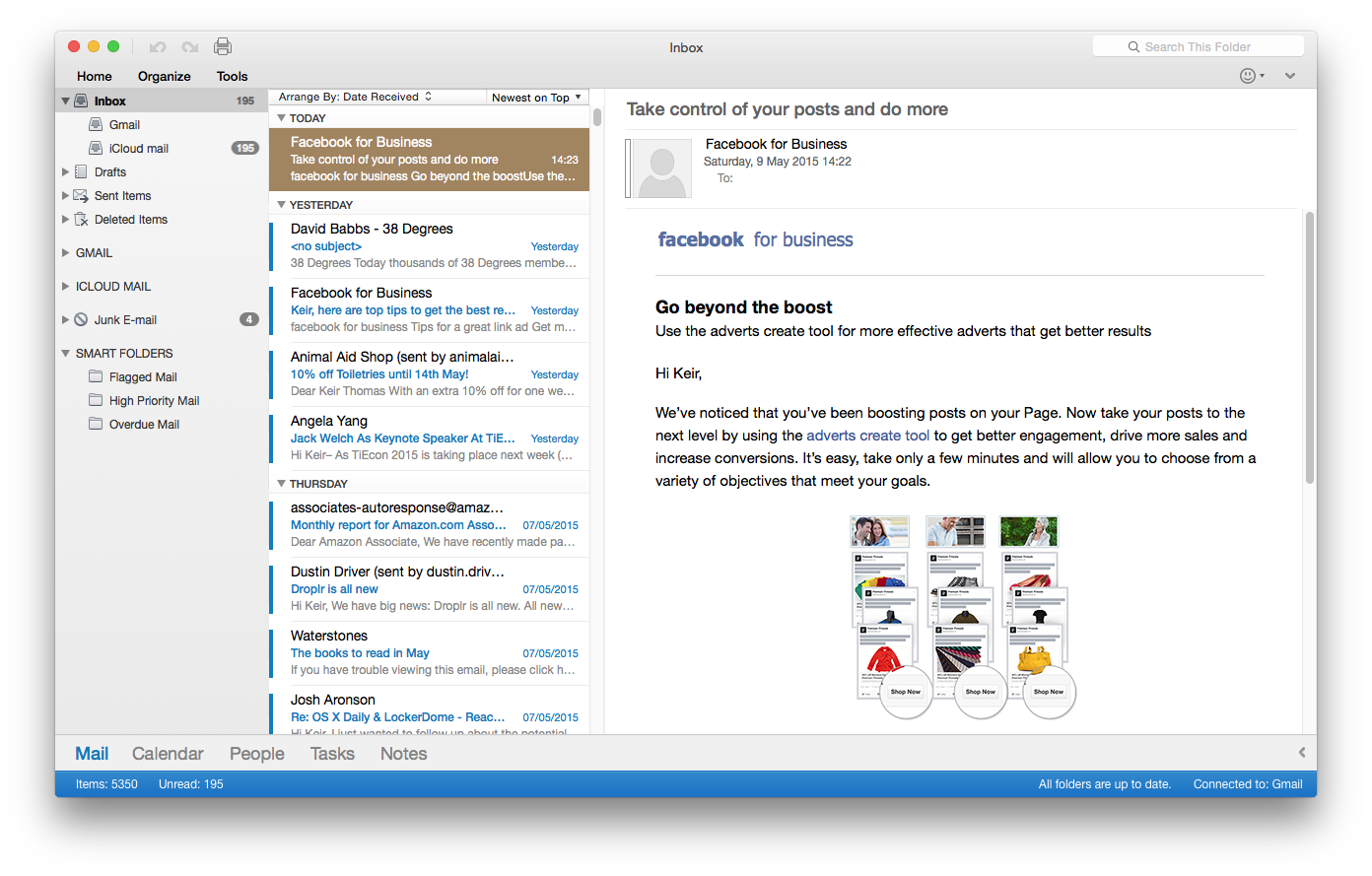 The downside is that Outlook is still a tool focussed on accessing Exchange servers – it feels like a tool from Microsoft for Microsoft products. It’ll tune into other email and calendar services adequately but there isn’t any attempt at full integration with iCloud, as one example, or Gmail. Outlook simply connects to the iCloud email and calendar servers like any other third-party email/PIM app. Although Outlook has a Notes, Tasks and People view, these are essentially inaccessible on your mobile devices or indeed another instance of Outlook running on other Macs you own.

The lack of integration with the system address book is particularly frustrating and leads to the user opening the Contacts app to look-up an address when it’s first required, or searching through old emails. Outlook is compatible with LDAP so in theory you might be able to configure a connection to iCloud but it’s not taken care of by the setup wizard.

Read: Outlook for iOS 8 vs Apple Mail for iOS

Another annoyance is that this updated Outlook still lags behind the Windows version in features. The complaint that users had about the earlier Entourage app – that it was essentially Outlook Lite – still cuts close to the bone. You can’t schedule the sending of emails, for example, as you can with Outlook for Windows. There may be some design decisions at play here – after all, it isn’t the Mac way to throw 1000 features at the user, and Microsoft’s Mac team has always been respectful of this – but it’s annoying Googling how to do a task and receiving instructions only possible if you’re using Windows’ Outlook.

Although core features like email filtering are present, and highly usable, there are things missing that are simply common sense in the 21st century. Outlook hasn’t heard of the cloud, for example, so forget about iCloud, Dropbox or even OneDrive attachments. If you want to send an attachment over 20MB via iCloud (or 25GB for Gmail) then you’ll need to upload it manually somewhere. Outlook isn’t even entirely compatible with the new-ish Outlook app for iOS, which lets you archive and send received messages into the future with a swipe. The messages are simply marked with a Follow-Up flag in the desktop app, which is hard to spot and inconsistent.

Curiously, Outlook lacks full-screen mode even though the other new Office apps work fine with this.

Tips for using Gmail on your iPhone