There’s very little to dislike in Word for Mac 2016. Using it for just a few hours felt similar to the switch from OS X Mavericks to Yosemite: the new version of Word simply feels fresher and much more streamlined in everyday use. It’s also more consistent with the Windows version, so PC switchers will be happy. Upon its initial release in July 2015 it might have been a little too prone to crashing, but things have improved nicely since then. If you have an Office 365 subscription there really isn’t any reason not to upgrade immediately.

The biggest and most welcome change to Word for Mac 2016 is the new Ribbon-based look and feel, designed from the ground up for Retina displays – although it works just fine on non-Retina screens, of course. Everything looks very smart and professional. The Ribbon is also much more accessible than you might think, with several Ribbons hidden until needed. It’s only when you click inside a table that the Table and Layout Ribbon become visible, for example.

The clumsy Ribbon design of Office 2011 has been massively overhauled, with some features moved into more sensible locations, and an always-visible Design tab introduced that lets you apply one-click templates and looks to your documents. Notably, the Ribbon isn’t customisable – or at least not yet. Microsoft says it’s working on adding that feature. 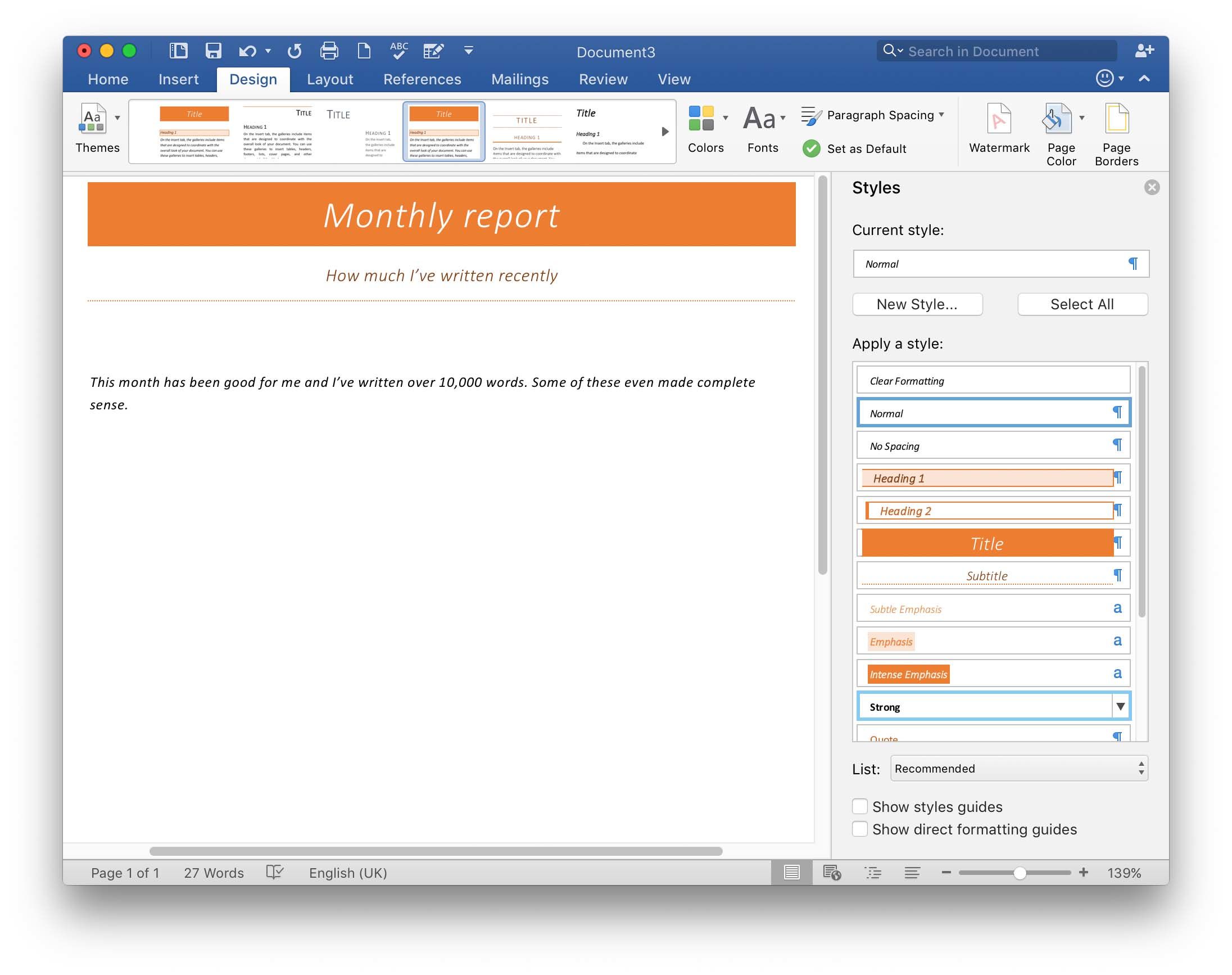 Alas, the Ribbon’s promotion means the formatting and standard toolbars of the past 25 years are no longer around; although the Home Ribbon essentially replaces much of the text formatting tools that were found there, and is augmented by the Quick Access toolbar that runs across the top of the program window and provides quick access to undo/redo, one-click printing, and file operations. Notably, the main menu is still present, unlike with the Windows version of Office, so finding most familiar features isn’t hard for upgraders from Word 2011.

Fans of the floating toolbox window from Office 2011 and earlier and catered for – just about. Click the Styles Pane button, for example, and a styles listing will appear at the side of the app window. This can be “torn off” like a browser tab to make it into an always on-top window.

There’s a new Smart Lookup pane too, which appears when you highlight a word and select the option from the right-click menu. This provides an online dictionary lookup alongside Wikipedia, Bing search, and so on. It’s not entirely unlike the dictionary pop-up in built-in Mac apps that appears if you force-click on a trackpad, but notably there’s support for force-clicking within Word.

In fact, Word’s as disconnected from OS X’s useful built-in tools as ever – there’s no file versioning, for example, other than that available via Finder. You can use the pinch-expand trackpad gesture to increase/decrease the zoom level, though.

Like all Office 2016 apps, Word 2016 focuses on making it simple to work on documents with others via the cloud. In a business environment this might be via a SharePoint server or OneDrive for Business, but humble home OneDrive users are supported too. In fact, Word 2016 defaults to saving to OneDrive and you have to click an On My Mac button to access your hard disk contents (although Word subsequently remembers this choice).

Sharing documents via OneDrive isn’t limited to working with others. If you have Word installed on your iPad or iPhone you can use it to quickly switch between devices – open the doc simultaneously on your iPad, then make an edit, and it’ll show up within seconds on your Mac. You just have to keep remembering to save the file, because this not only writes the latest version but also integrates changes made elsewhere. It all works pretty well, but we still prefer the up-to-the-second collaborative editing of Google Docs – although Google Docs hasn’t got even a fraction of the features of Word 2016. 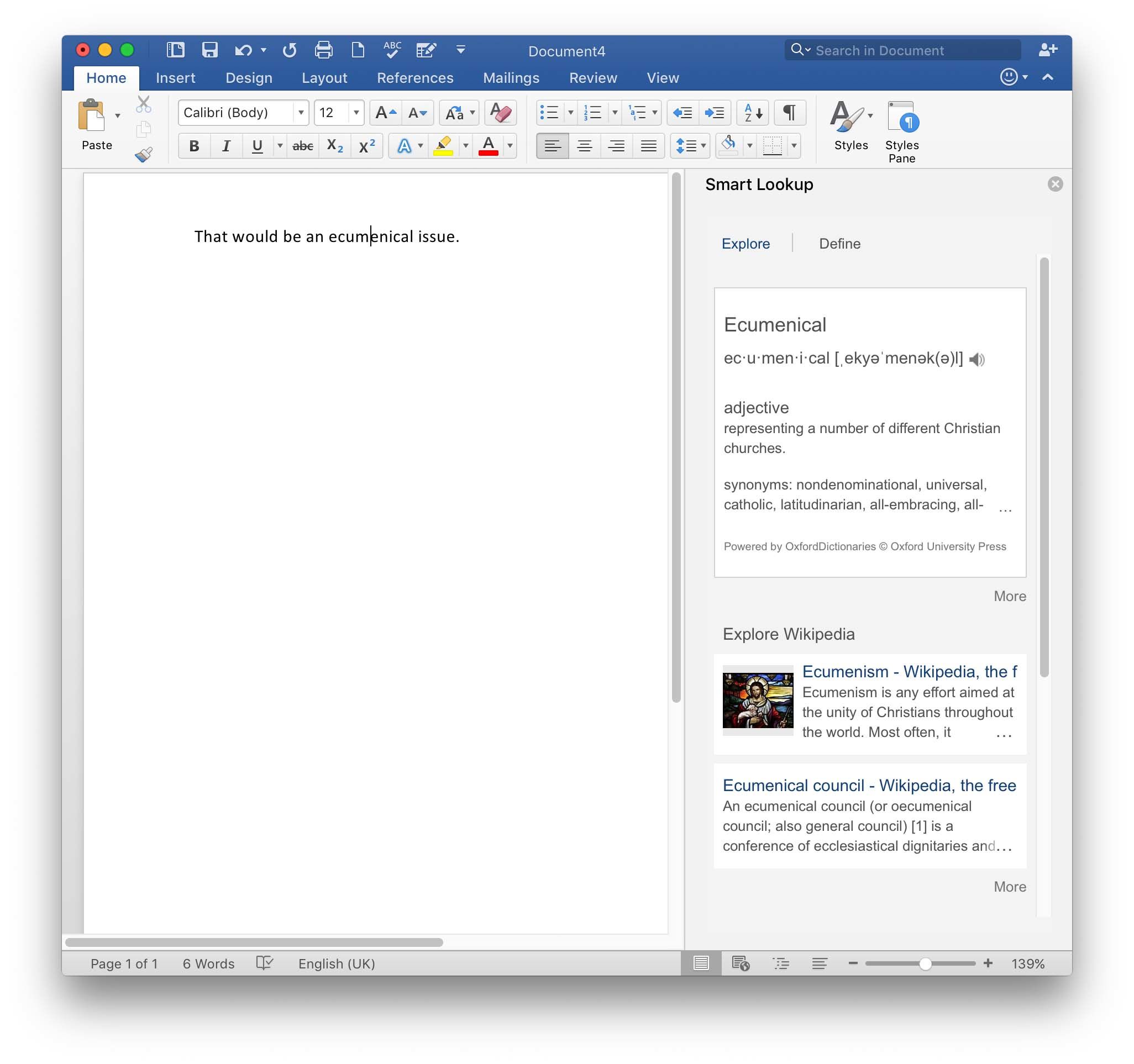 Notably, as with all the Office 2016 apps, there isn’t direct support for Apple’s own cloud storage service, iCloud. You can still save files to iCloud Drive, of course, just like with any app. But for proper collaborative features you’ll need some variation of Microsoft’s own cloud offering.

As with all the Office 2016 components, Microsoft has taken a rolling update approach with Word 2016. Not only are bug fixes regularly delivered via the AutoUpdate tool, available on the Help menu, but new features are added too. Some of these can be substantial. For example, recent updates include custom paper sizes, support for custom and common citation styles, screenshot taking and inserting, and New, Print and Save icon additions to the Quick Access toolbar (because, believe it or not, they weren’t present until that point).

This can make Word 2016 feel a little unfinished, as well as make users feel like eternal beta testers. But make no mistake – unlike Excel 2016, which feels only partially baked at the present time, Word 2016 is feature-complete. Everything you need is present, and more besides. However, Microsoft invites users to submit suggestions for features or improvements via its Suggestion Box website; perhaps surprisingly, many of these are on their way to being implemented.

Performance seemed absolutely fine in our testing. True, Word 2016 takes a second or two longer to start from scratch than the previous 2011 release, but this is something Microsoft is working on and has already made massive improvements compared to earlier versions. Editing and scrolling certainly weren’t slow.

The irksome find-and-replace system is mostly inherited from the older Office 2011, which is to say it appears as a side panel at the left of the program window. Getting to the find-and-replace dialog box, with its useful Special and Formatting tools, still takes too many clicks. Fortunately, there is a keyboard shortcut workaround.

That aside, however, there really is very little to dislike in Word 2016. Upon its initial release in July 2015 (see the next page for our verdict on the initial preview release) it might have been a little unsteady on its feet, and perhaps too prone to crashing. Since then the little foal has matured nicely into a handsome thoroughbred. If you have an Office 365 subscription there really isn’t any reason not to upgrade immediately. Remember that you can download just the Word 2016 installer, eschewing the rest of Office 2016 if you wish (and we strongly advise you to avoid Excel 2016 for the moment).