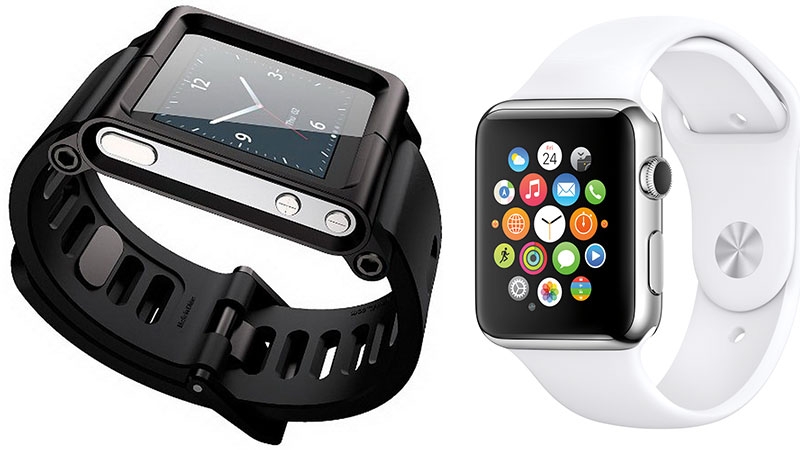 The Apple Watch is clearly the more feature-rich device, but it’s interesting just how well the iPod nano 6G with a watchstrap stands up to it. Apple’s old iPod is more useful in some ways, especially with regards to music, and thanks to Nike+iPod it’s just as good for exercise tracking. There’s a huge swathe of cool Apple Watch features missing from the iPod nano 6G, though: everything from Siri to Messages and Digital Touch. These are the things that make the Apple Watch an interesting product, not music playback. The iPod 6G with a watch strap is certainly better than many other smart watches we’ve seen, but it’s not better than the Apple Watch.

Long ago, Apple fans wore their iPod nanos on their wrists, as a sort of prehistoric Apple Watch. But how well would this setup compare to the real thing? You might surprised. Here’s our head-to-head comparison of the Apple Watch and the iPod nano 6Gk, complete with wriststrap.

Should you think about an iPod nano 6G with a strap instead of an Apple Watch? It’s an odd thought: after all, the iPod nano 6G came out back in 2010, while the Apple Watch is so new that you’ll struggle to pick one up from the Apple Store.

But for a brief period, the iPod nano 6G was the hippest product Apple had made. This micro iPod featured a small 1.5-inch touchscreen and many apps from the iPod touch. It can be picked up for much less than an Apple Watch, and there are plenty of straps available. Now that Apple makes watches, is it worth reconsidering the iPod nano 6G as an Apple Watch alternative? 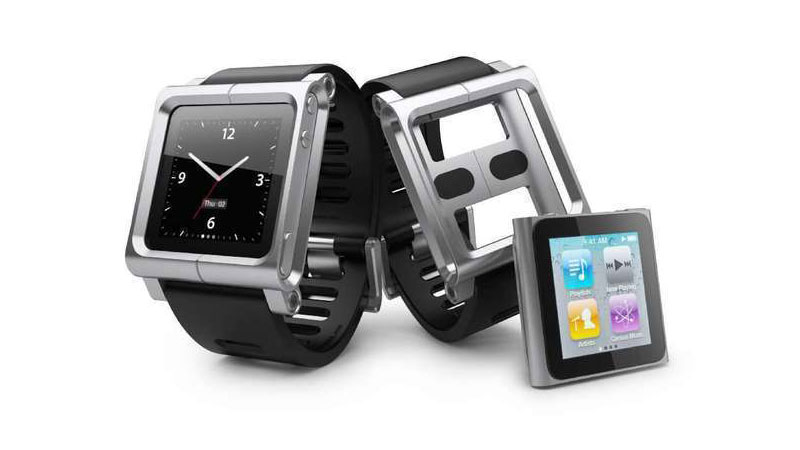 It predates Lightning and uses the older Dock connector to sync and charge. Headphones are connected via a 3.5mm headphone jack although it lacks Bluetooth. Music and audio is synced to the device, and it has 8GB of audio playback.

Apple no longer sells the iPod nano 6G, but you can pick one up on Amazon for around £150 and straps cost between £5 and £10.

The Apple Watch has a 38mm or 42mm display (340×272 and 390×312 pixels, respectively). It features a multi-touch interface along with new Force Touch technology, and Taptic Engine feedback. The Apple Watch also has a Digital Crown for zooming and moving through lists.

It uses a new inductive charger and has 18 hours of battery life (6.5 hours of audio playback). It runs the new Watch OS software with numerous OS apps including Mail, Calendar, Weather, Maps and Siri. The Apple Watch features Bluetooth 4.0LE and Wi-Fi 802.11b/g/ 2.4GHz (for system use only). The Apple Watch has 8GB of RAM, but you can only use 2GB for storing audio.

Both the iPod nano and Apple Watch work really well as watches. The iPod nano 6G comes with 18 clock faces including Mickey Mouse and Kermit the Frog. The Apple Watch has only 8 faces, but offers a huge range of customisation options so you can make it your own.

But the iPod nano 6G has a surprisingly healthy number of apps too. As well as music, there’s a pedometer and Nike+iPod, and a photo viewer. It also has Podcasts and a FM Radio tuner. The iPod nano 6G has Siri’s predecessor, Voice Over (we could never get it to work). What it lacks is an app store, and third-party apps. It also lacks Mail, Maps, Calendar and Messages so you can’t really use it for typical “smart watch” functions.

Fitness sits at the heart of the Apple Watch, and it comes with two health apps: Activity and Workout. Activity reminds you to stand up, move around and exercise for a small amount each day. Workout tracks all kinds of running, walking and sport activity. On the rear of the Apple Watch sits a heart rate sensor.

While the iPod nano 6G lacks the heart rate sensor, it integrates with a Nike+ sensor to track workouts as effectively as an Apple Watch.