If you are an iPhone user there is literally no contest: the Apple Watch is the only game in town. But we have been impressed with the LG G Watch R. Apple needs to stay on top of its game to keep ahead of Android in this area, and the LG G Watch R is a very good example of the Android Wear family.

The LG G Watch R is one of the more desirable Android Wear smartwatches, and it may surprise you to know that this is no faint praise. We know that the vast majority of Macworld UK readers are iPhone users, so to some extent how good or bad are Android Wear devices isn’t irrelevent. But it is always good to check out the opposition, and that is why in this article we take a good look at the LG G Watch R, and compare it to our own beloved Apple Watch.

The Apple Watch Sport Edition is the cheapest you can buy. At just £299 Apple’s cheapest model is bound to be popular, but prices soon scale up and there are lots of optional extras on which you can splash your cash. You can spend more by opting for the Apple Watch Edition which starts at £479. The most expensive Apple Watch is £13,500. Right now, you can’t walk into an Apple Store and buy an Apple Watch. You have to pre-order and wait.

The LG G Watch R is listed for various prices, but lots of etailers have it listed without stock. Those that do seem to settle on the SRP of £229 inc VAT, and include Amazon and Argos. In my local (non-London) area you can reserve the LG G Watch R right now, and pick it up from multiple Argos stores, so stock does seem to be out there.

Both of these devices are built and finish with premium quality in mind. They are robust and hard wearing. So where are the differences?

The G Watch R has bucket loads of style. The number of Android Wear smartwatches is increasing so with the same software and largely the same hardware, design is a key element when choosing between the devices on offer. The LG G Watch R has a round screen rather than square – like the Moto 360, and not at all like the Apple Watch. It looks more like a traditional wristwatch than the square-faced Apple Watch.

We think the G Watch R looks great and will come with a stainless steel frame and a leather strap although the standard 22mm size means you can chop and change. The G Watch R is IP67 rated so is dust- and waterproof – up to 1m of water for 30 minutes.

The LG G Watch R also comes in black or silver. And it is no bigger than a lot of analogue watches on the market.

In terms of watch faces (or ‘complications’) the Apple Watch has 11, yet Apple claims to offer more than two million ways to tell the time through various customisation options. There’s everything from Astronomy and Solar to Modular, Timelapse, Utility, Motion, Photo and even Mickey Mouse.

Both are very good-looking watches. Honestly, I prefer the more watch-like aspect of the LG G Watch R. It just looks more classy. Your opinion may differ. But when it comes to usability the Apple Watch’s large, square screen is much more practical. And it’s what you do with it that counts.

Finally, the Apple Watch offers much greater scope for customisation. And as jewelry is a personal thing, this may sway you toward the Apple wearable. Read: Apple Watch vs Apple Watch Sport .

Apple uses its own S1 chip and has a healthy amount of storage at 8 GB. However, as it stands you can only use 2 GB for music and just 75 MB for photos. Apple doesn’t quote RAM. It supports Bluetooth 4.0 and 802.11b/g Wi-Fi, too. There’s a heart-rate sensor, an accelerometer, a waterproof speaker and support for wireless charging, although the Apple Watch depends on a companion iPhone for GPS. A digital crown is used alongside touch input to interact with the Apple Watch.

We’re seeing almost identical specs across all the Android Wear smartwatches with a few little differences here and there. The core hardware with the LG G Watch R is a familiar Qualcomm Snapdragon 400 1.2 GHz processor, 512MB of RAM and 4GB of internal storage. 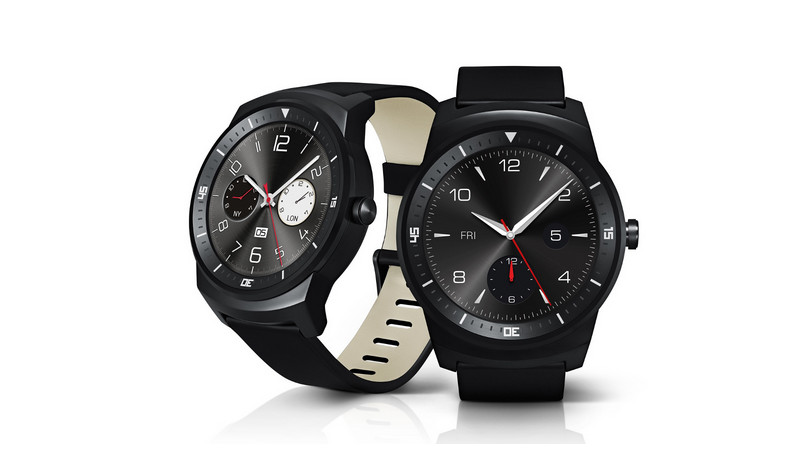 A battery size of 410 mAh is pretty typical and there’s the usual array of sensors including a gyro, compass, accelerometer. An additional feature which you don’t always find is the heart rate monitor which sits on the back.

The 1.3in screen might sound small but looks great in circular form and easy to use with Android Wear. The display itself is P-OLED and has a resolution of 320 x 320. In regular watch mode, you’d be forgiven for thinking the moving hands were real.

Don’t expect to see a huge difference in performance between these two devices. We prefer the round display of the LG from an aesthetic point of view, but the Apple Watch is indisputably more useful. And the Apple Watch wins on storage – kinda. Perhaps the key difference lies in the features. On which…

While the LG G Watch R runs Android Wear, and the Apple Watch runs Apple’s own iOS-based software, in essence both do the same thing. On either watch you can install apps, make calls and send texts, call up the voice assistant (Google Now with the LG G Watch R, or Siri with the Apple Watch), check your email, control-, store- and play back music, display photos, view notifications from social media and more.

The Apple Watch has a few extras, including Glances (swipe up from the bottom of the screen to see at-a-glance information on whatever you choose to have there), and Digital Touch. The latter lets you connect with your friends with a single touch. Pressing the button under the Digital Crown brings up thumbnail images of your friends, which you can use to call or message them. You can also send them your heartbeat (odd), or to let them know you’re thinking of them send them a physical tap (odder still), thanks to the unique ‘Taptic Engine’.

Both support haptic feedback, although Apple’s Taptic Engine takes things a step further. Not only is the Apple Watch able to distinguish between a tap and a press, allowing it to support a range of gestures, but it can also provide differing amounts of vibration for specific notifications. For example, in the Maps app the amount of vibration differs depending on whether you need to take a left- or right turn.

Both smartwatches are primed for health- and fitness tracking, with a heart-rate sensor and pedometer inside. The Apple Watch also has an accelerometer to measure body movement. Both will track your daily activity and encourage you to hit exercise goals. See also: Apple Watch vs Motorola Moto 360 comparison review.