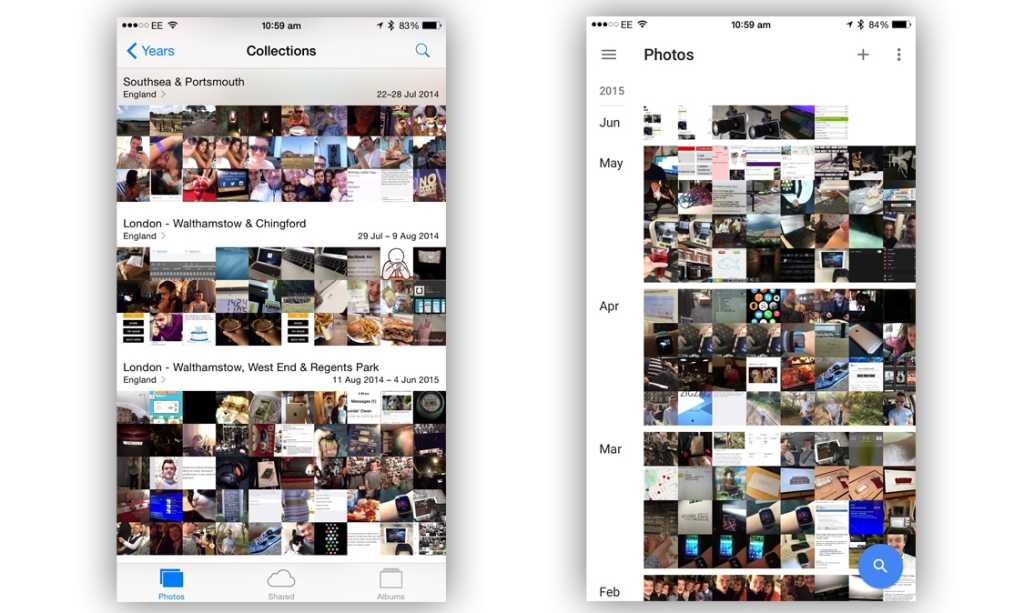 So which is better, Apple Photos or Google Photos? The decision primarily lies with how you feel about your personal data being monetised by Google; if you’re happy with that, go ahead and use Google Photos – it’s a great free service. But if you’re concerned about online privacy and prefer to use a native app, Apple Photos is the way forward for you.

Google Photos is an app where you can back up and browse your entire photo library from almost any device. Many people have drawn similarities between Google’s Photos app and Apple’s Photos app, which was introduced in iOS 7 and subsequently arrived on the Mac, so we’re going to compare the two and see exactly how similar they are, and which is the best for you.

Google Photos is a free download for iOS so you can run it on your iPhone or iPad – it’s not just for Android users.

For some related comparisons between Apple and Google products, take a look at Apple Maps vs Google Maps and Apple Music vs Google Play.

The way that both the Apple Photos and Google Photos apps organise your photos is very similar. Apple organises your photo library using smart groups based on time and location called ‘Moments’, ‘Collections’ and ‘Years’.

Tapping at a point on the Year view will take you to the Collection of photos from around that time, tap again to be taken to the Moment, which will be all the photos from that particular occasion.

On Apple’s app you can also sort your photos into Albums, or tag a photo with a heart to automatically add it to your Favorites Album. 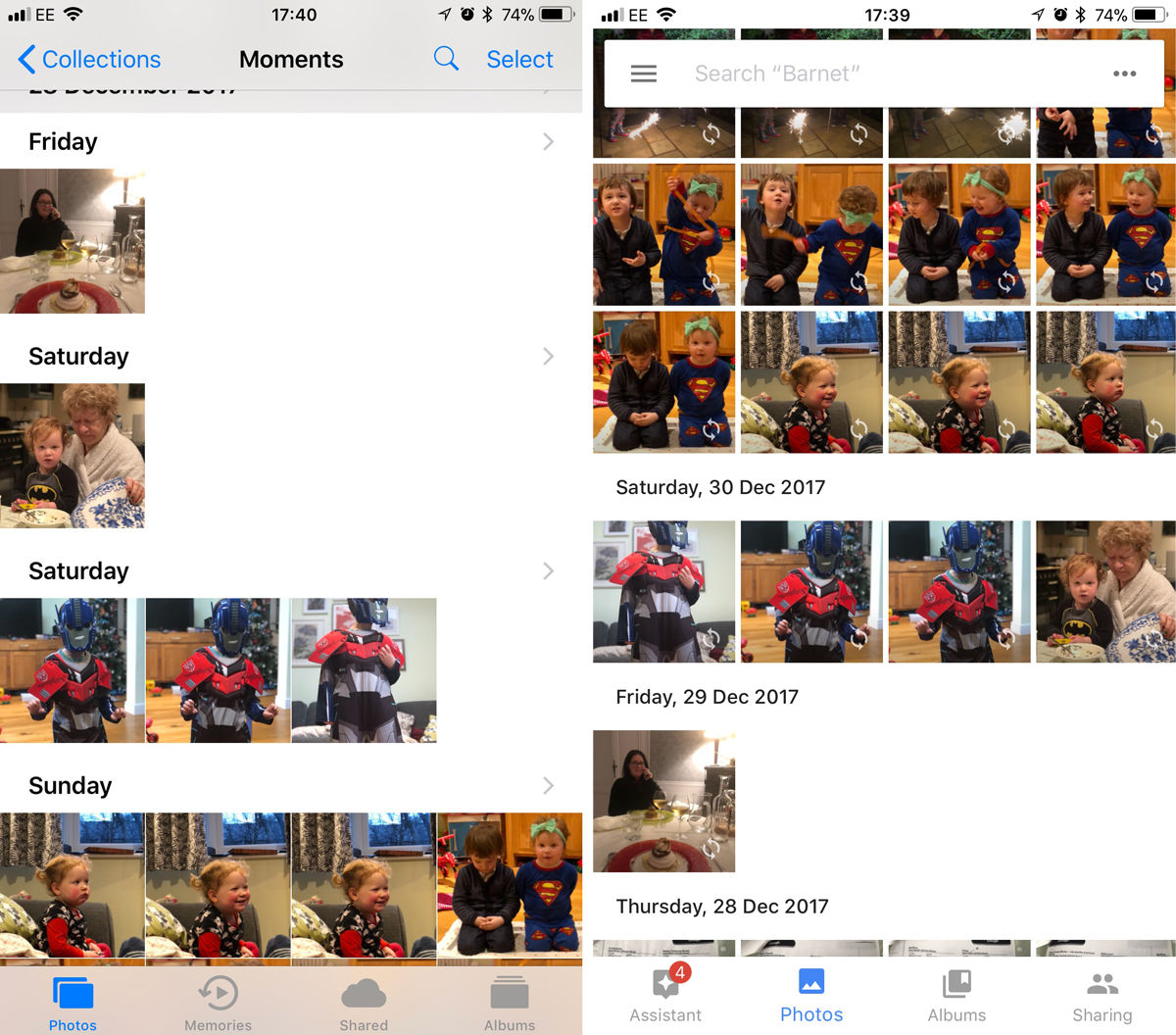 While the two apps may look somewhat similar, Google Photos takes a different approach to photo organisation. The order is reversed, for one thing: the most recent photos appear at the top and you swipe up to see more.

If you’re viewing the day’s photos in Google and want to see all the photos you took in a month, pinch to zoom out. Want to zoom in on a particular photo? Unpinch to zoom into it. If you zoom out from a photo back to the day, or month view, a side bar appears that lets you quickly scroll back in time by tapping, holding and dragging the side bar to a specific month. This side bar is slightly more precise than swiping up and down on the Apple app.

However, that’s not the impressive part of Google Photos organisation – it automatically analyses your photos and adds them to categories such as ‘Cats’ or ‘Skylines’ that you can quickly access.

It doesn’t stop there, either, as you’re also able to keyword-search to find a photo. For example, if we want to view all photos containing phones, type ‘gadgets’ into the search bar and Google Photos should display every photo in your library that has a gadget in it. It’s not 100 percent accurate yet, but we’re surprised (and a little creeped out) by how well it works.

The Google app also sorted all our photos of cats into a folder for us: we didn’t even have to ask.

Apple also has a search feature within its Photos app, and this works well. Since launch this has evolved; it used to be limited to locations and dates, but now you can search for things as diverse as chairs, chimneys and Christmas trees. 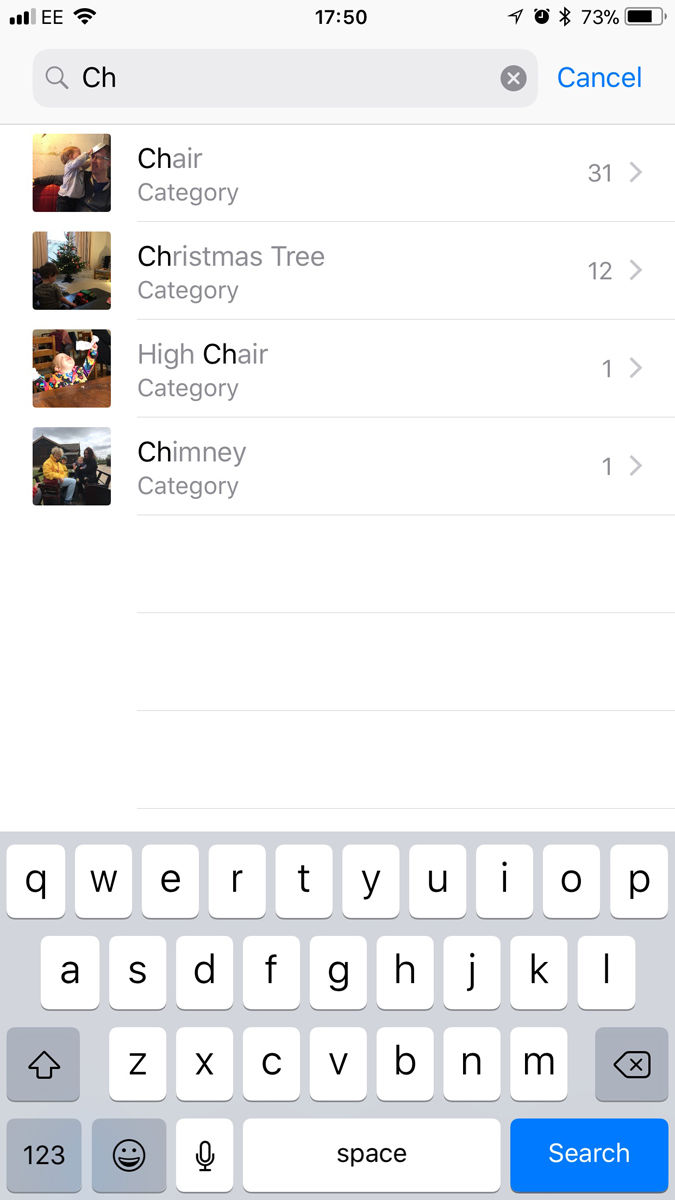 Let’s move on to another important aspect of any app that handles photos: editing.

Google offers various editing tools to help spruce up your photos, including the standard ‘auto enhance’ and a number of Instagram-esque filters for those that use them. It also offers tools to tweak the light, colour and ‘pop’. These are applied using sliders and offer no manual input. 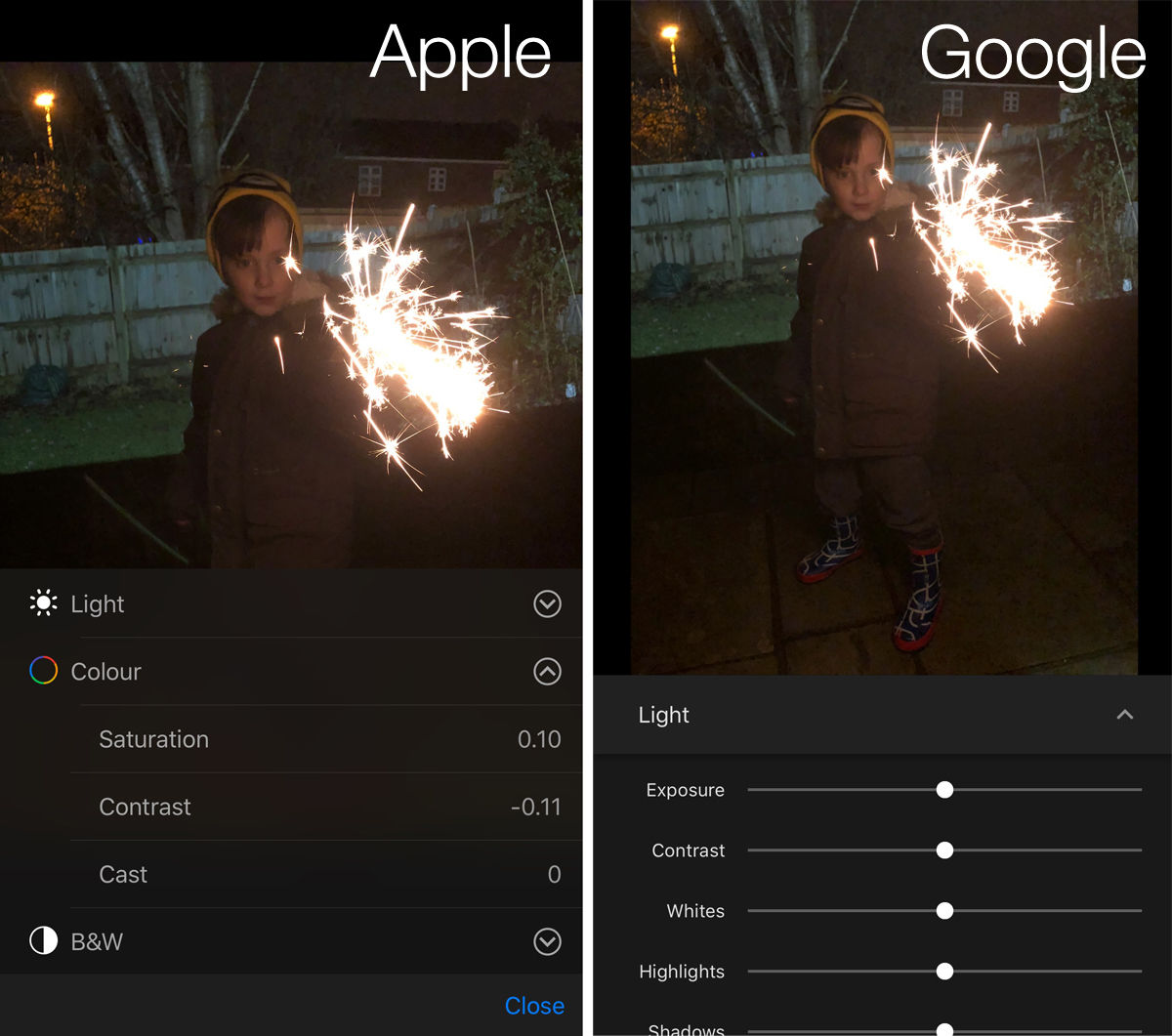 Apple also offers auto enhancement, filters and controls over colour and light but takes it a step further than Google. If needed, you can adjust:

Apple offers extremely precise numerical measures for each of these, but one quibble is that you still control them using sliders – a method which is never as precise on a touchscreen, and which in this case doesn’t even offer numbered scales.

Apple has one more trick up its sleeve: you can edit photos within the Photos app using third-party editing tools (such as those used in Camera Plus).

Google Photos hits back, however, with another impressive feature. Its analysis of your photos doesn’t only result in them being sorted into smart folders; it will also suggest edits. These include GIFs, videos, collages and edits based on your photo library, and can be hit and miss, but we’ve also had some amazing GIFs and videos automatically generated for us.

We were initially concerned that these extra versions of our images (kept in addition to the original) would quickly clog up our iPhone memory, but all these versions are saved in the cloud (which means you need a web connection to view them). And there is no fear that the cloud space will quickly fill up either – Google gives up unlimited space for your photos (more on that below).

Incidentally, Apple doesn’t save extra copies of your adjusted images, it just saves the adjustments you have made and applies them to the photo when you view it.

Sharing our photos online has become a daily occurrence thanks to the likes of Facebook and Instagram, so how do the two mobile titans handle photo sharing?

iPhone users will be aware of the Share Sheet (part of iOS that appears in many different apps – it’s the icon that looks like a square with an arrow coming out of it). The Share Sheet displays a list of social networks and apps that you can share the selected file with. A similar pallet of options appears in Google Photos and Apple Photos, and each performs as you’d imagine – simply tap the icon of the social network that you want to share the photo with. Nice and easy. 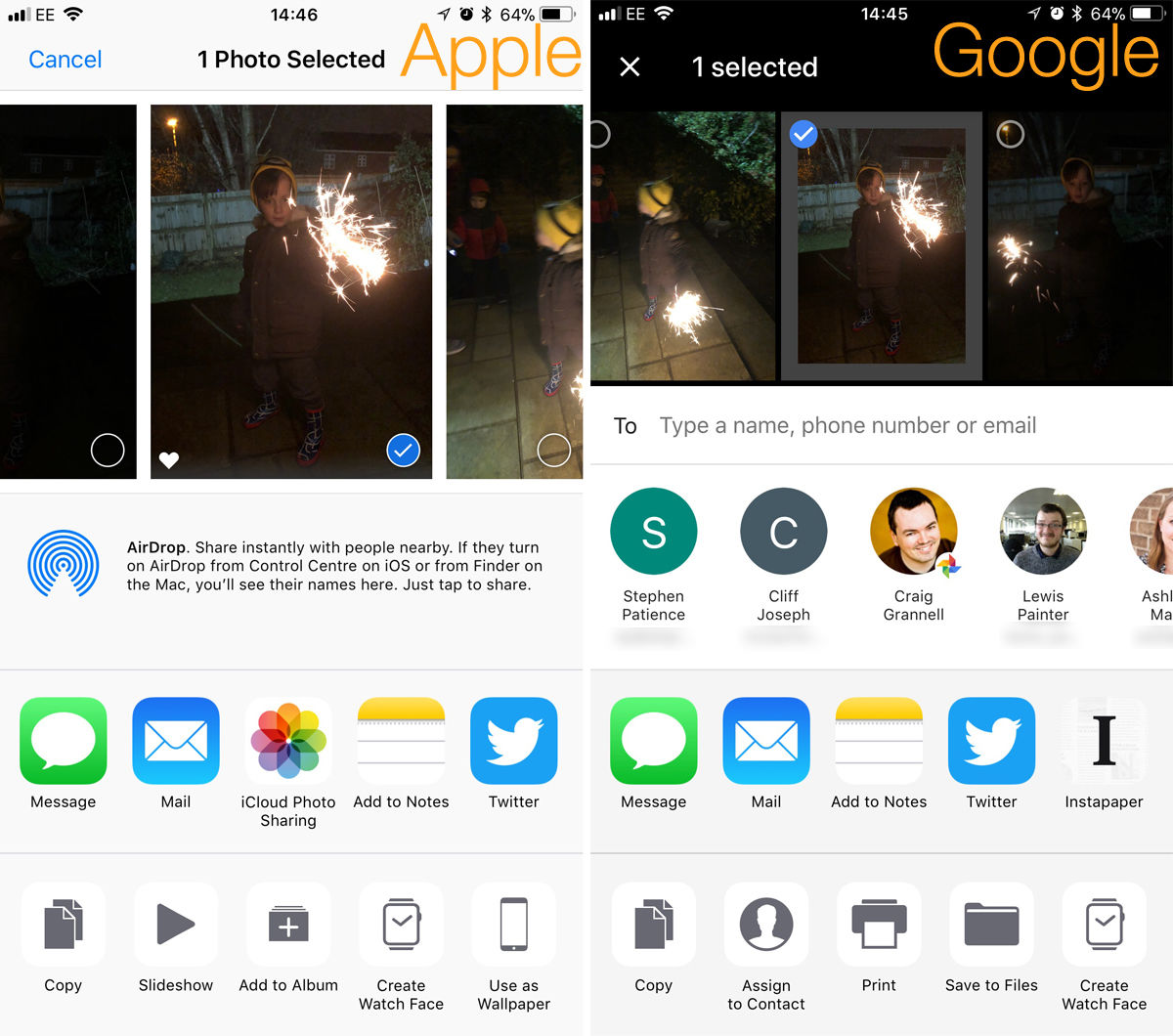 Apple also offers iCloud Photo Sharing via shared folders within the Photos app. You simply create a folder and add the email address of the person(s) you want to share the album with. Once created and shared, all members will be sent a notification whenever new photos are added, and they can also add photos to the album. You can store up to 5,000 images in a Shared Album. iCloud Photo Sharing also lets you create a pubic link to an album that anyone can view from a web browser (more on iCloud Photo Sharing below).

By default Apple stores your Photos in iCloud in My Photo Stream – you can store the last 1,000 images, or 30 days’ worth of images for free. These images can come from any of your devices – even photos you’ve downloaded on to your Mac from your camera.

This is the main thing that sets Apple Photos aside from Google Photos. Google Photos backs up your entire library to its servers, offering you unlimited space for free. 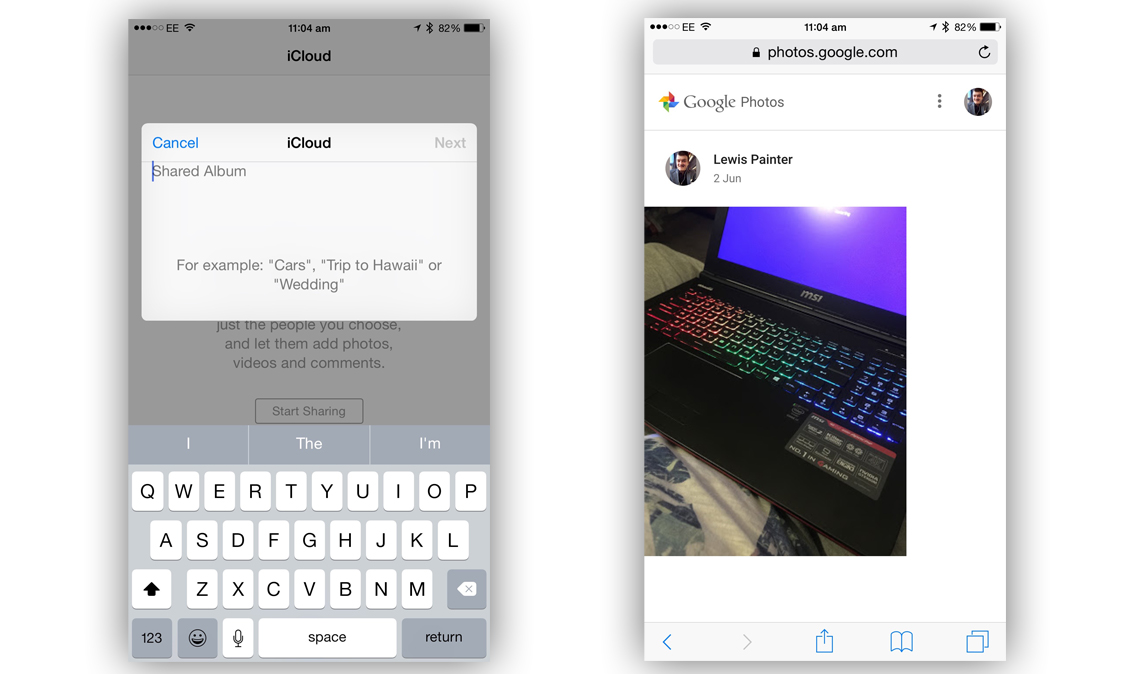 Apple’s Photos app is available on every iPhone, iPad and iPod Touch running iOS 7 or later, and every Mac running macOS/Mac OS X 10.10.3 or later, as well as via iCloud on Windows. If you are on iOS 8.1 or later, you also benefit from iCloud Photo Library, which means that if you have sufficient storage space on your iCloud account, your photo library should be synced between your Mac, Phone, iPad and iPod Touch and available on each device. 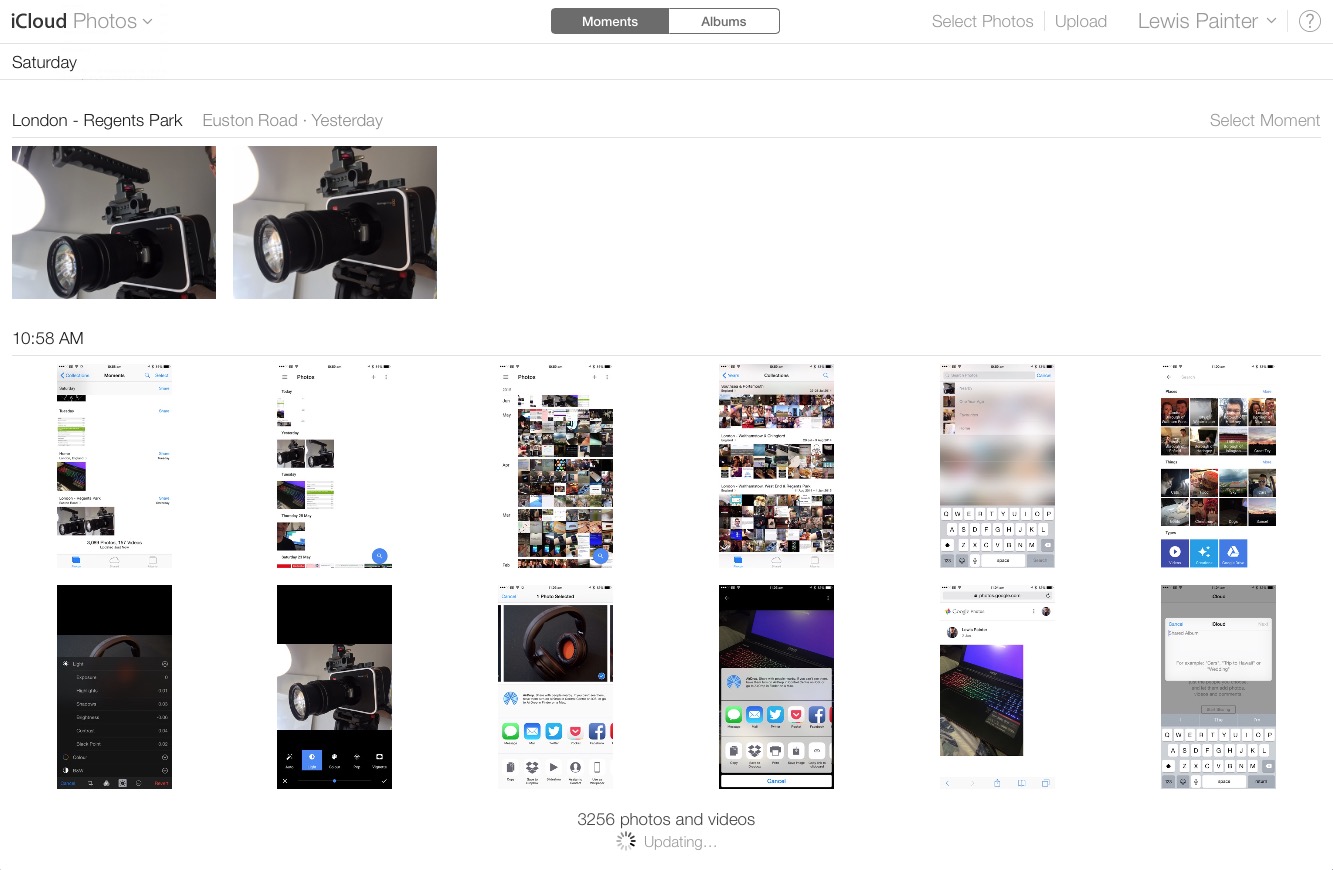 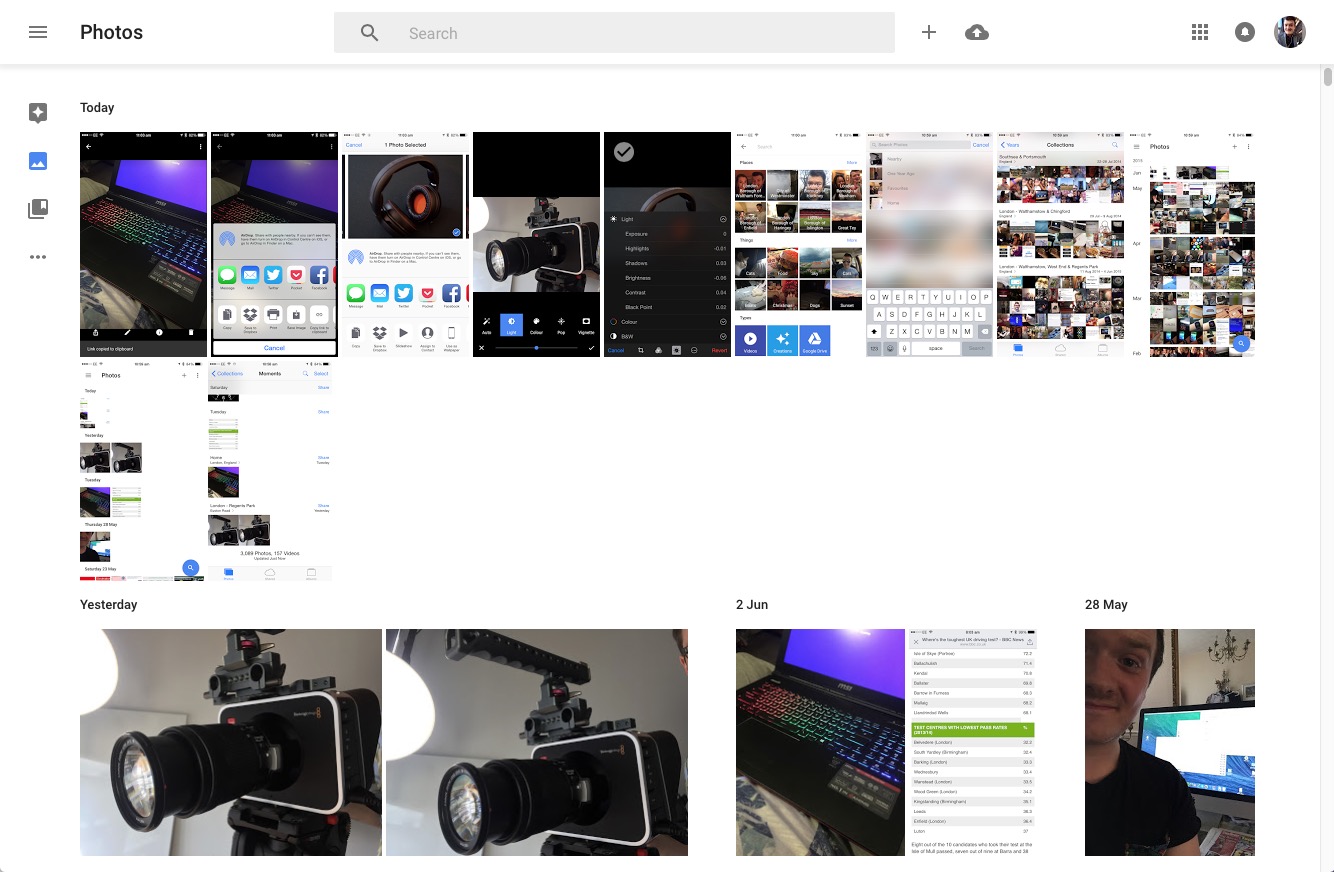 Google Photos has iOS and Android apps. Much like Apple’s iCloud, Google Photos is also available via web browser at photos.google.com, where you can view your photo library, download and upload new images.

Let’s talk storage, the most important factor in both Apple Photos and Google Photos.

Apple’s iCloud is a cloud service that backs up not only your Photos, but your entire phone. The company offers 5GB of free storage, which for some users is okay, but others need more – which you have to pay for. These days you get 50GB for a very reasonable 79p per month; if you need more than that, you’re forced to pay £2.49 per month for 200GB of storage or £6.99 for 2TB.

We’d say 50GB is around the sweet spot of what you’d need, so we’re pretty keen on this pricing structure, but it still feels like there’s quite a jump to the next tier: most people will never use 200GB and might baulk at paying so much. It’s a lot of money to pay just to have access to all your photos all of the time. Which isn’t exactly a necessity.

Google has caught on to the frustrations of cloud service users and has offered something that the likes of Apple, Dropbox and Microsoft can’t (or won’t) compete with – completely unlimited photo and video storage, free of charge. Google Photos is available for iOS, Android and has a Mac and PC uploader so you can back up your entire photo library across all devices.

There are limits to what Google can offer, though; the uploaded images and videos aren’t the original files, but are instead compressed copies. Google claims that it isn’t standard compression and that while the file size is minimised, there’s little or no effect on image quality. Magic, eh? There’s also a limit on resolution: 16Mp for photos and 1080p HD for videos, and while you can still upload larger files, they’ll be shrunk down.

Of course, you still have the option to upload full quality original files, but this will eat up your Google Drive storage, which does cost you. (You get 15GB for free, though; Apple only gives 5GB free space in iCloud.)

You should be asking yourself: “What is Google getting out of this?” We all know that nothing in life is actually free.

Apple has a very different stance on mining personal data, believing that people have a fundamental right to security and privacy. Speaking at EPIC’s Champions of Freedom event in Washington, Apple CEO Tim Cook had the following to say about Google’s service:

“We believe the customer should be in control of their own information. You might like these so-called free services, but we don’t think they’re worth having your email, your search history and now even your family photos data mined and sold off for God knows what advertising purpose. And we think some day, customers will see this for what it is.”

In response to claims of monetising the service, a Google spokesperson told us:

“Our first priority – as with most products that Google builds – is to get the user experience right. So we have no monetisation plans at this time. Google Photos will not use images or videos uploaded onto Google Photos commercially for any promotional purposes, unless we ask for the user’s explicit permission.”