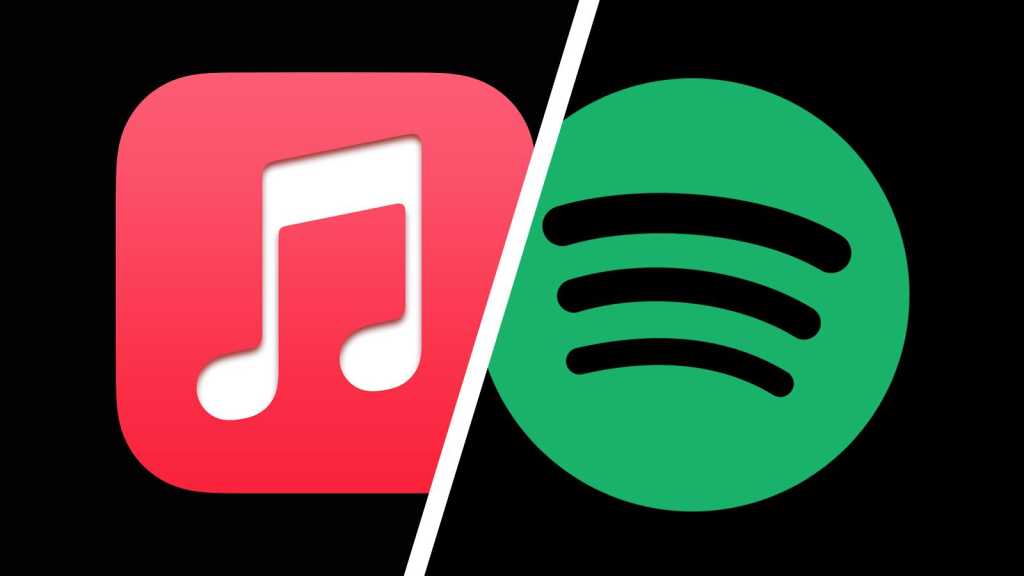 If you use mainly Apple devices and like the idea of multiple radio stations playing your favourite genres, then Apple Music is a great service with plenty to offer. The choice of tracks is as varied as Spotify, and if you’re willing to explore the genre catalogue then you’ll find a literal world of music. Spotify remains our favourite at this point though, as the interface feels less cluttered and the playlists more tightly focussed on the music we tend to enjoy. It’s very close though, and you can be sure that whichever one you choose, you’ll be very happy with all the music available to you for a modest amount each month.

Apple Music and Spotify are two of the most popular music streaming services in the world. While Spotify has been enjoyed by listeners since 2009, Apple Music is a relative newcomer, launching in 2015. Since then, Apple’s service has quickly grown so that in a recent Statista report it revealed that Spotify now accounted for 35% of worldwide market share, with Apple Music in second spot on 19%.

So, which one is the best for you? Here’s our comparison of the musical monoliths.

As you would imagine with two mature services in a well-established and competitive area, the pricing for the two platforms is pretty much the same. Both offer individual accounts, family plans and student tiers, with Spotify adding a couple of extra options. Here’s how they break down:

The two additional tiers on Spotify are the ability to use the service for free on the desktop or mobile, but you will have to put up with regular adverts suggesting you sign up to a Premium plan, plus there’s the serious drawback of not being able to download music to your device, so you have to be happy with streaming-only. Saying that, if you’re at home a lot or work at your desk with headphones, then it can be a very useful way to enjoy music.

The Duo plan means a couple can sign up for the service with only a small increase in the monthly outlay. Spotify also creates regular playlists that combines the songs you both like, which is either a great idea or a terrible one depending on how closely your musical tastes align.

Both Apple Music and Spotify offers Family packages which are essentially six individual premium accounts that act independent of each other but come under a single, reduced price. You can also try the services for free before you commit, with Spotify offering a 1-month trial and Apple Music a more generous 3-month period.

if you are a student here’s how to get Apple Music for half price.

How many songs do they have?

Both services offer a massive selection of albums and songs, with 70million+ available on either platform. These include albums, podcasts and even old radio shows. Apple did have some exclusive albums and live performances for a while, but this seems to have reduced to the occasional offering now. Perhaps we’ll see an influx of new material once musicians can start gigging in earnest once more.

What audio quality do they offer

The audio quality of Apple Music is currently limited to 256kbps. That means it’s lower than the 320kbps offered by the Premium option in Spotify, but higher than the 160kbps offered in the free version.

However, it’s important to note that Apple Music is AAC while Spotify’s tracks are MP3, and 256Kbps AAC is often considered the better format. The more deserning audiophiles among us will know that MP3 files are both larger, and also lose more information due to compression, resulting in a slightly worse audio experience when compared to AAC.

One of the big buzzwords when it comes to music services is ‘discoverability’ which is just a fancy way of describing how easy users find it to locate songs or be introduced to new ones they might like.

Spotify’s main menu is littered with options, including Recently Played, Popular Albums, Editor’s Picks, then several lists that are based on bands or albums that you’ve been listening to. Tapping the Search icon allows you to either enter the details you want or browse through specific genres. As well as the standard Rock, Pop, Hip-Hop and other standard ones you’d expect, Spotify also creates groupings for activities or themes, such as Workout, Wellness, Party, Cooking & Dining, Black History is Now, In the Car, Sleep and a whole load more. Some of these are less clear than others and it can be a little overwhelming deciding which to explore.

Tapping on any one of them opens a further page on which you’ll find sub-categories that make things clearer. For example, tapping Cooking & Dining then presents you with a range of playlists (in this case including Kitchen Swagger, Dinner Music, Mellow Dinner, and more), plus food related podcasts. Tapping on other genres, you’ll also find popular playlists and new releases available.

One of Spotify’s defining features is playlists, and the service produces several bespoke ones each day based on music that it thinks you’ll like, plus there’s the Discover Weekly playlists which mixes new and old songs together into a multi-hour selection that will keep you busy for a while. Obviously, the longer you use the service the more accurate the playlists become, so be prepared for some left-field choices when you first set-up your account.

See also: Why I switched from Apple Music to Spotify.

Apple Music sorts things in slightly different way to Spotify. Along the bottom of the main page you have four main options for discovery: Listen Now, Browse, Radio, and Search.

The first is where you’ll find your recently played albums and playlists, plus a Top Picks section that the service thinks will be to your liking. The size of the Top Picks graphics does mean that they dominate the screen, in contrast to the smaller layout adopted by Spotify, so you don’t see much else without scrolling. Selecting the Made For You playlist acts in a similar way to the Daily Mix on Spotify, with a ‘radio’ station created that plays songs similar to the ones you listen to the most. 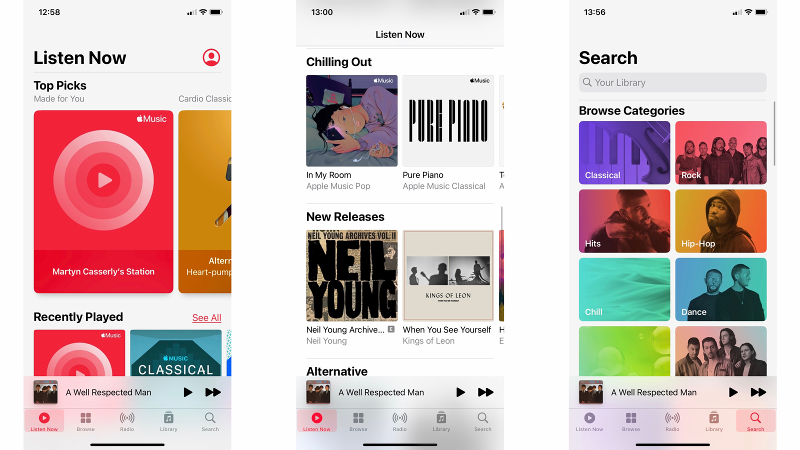 It’s not a bad idea, but you can only see the next track that’s due to play rather than the entire playlist that’s offering on Spotify. There are plenty of other options on the Listen Now page, which include the Essentials playlists that feature the best of certain artists within a specific genre, plus themed playlists and new releases.

Tapping the Browse option results in more playlists, with a focus on new releases, highlighted genres and a few selected themes, such as Your Afternoon Soundtrack, Audio Comfort Food, and the Daily Top 100 singles charts from different parts of the world. Scrolling down to the bottom reveals selections for Categories, Charts and Music Videos. Tapping the first reveals a long, long list of genres, as varied as C-Pop, Baile Funk, Indian Independent, Islamic Music, Kannada, Sertanjeo, Vallenato, and plenty of other offerings about which we have no idea either. Select one and you then have a more standard page with playlists, new releases, notable artists and essential albums. Several points for thoroughness, but unless you know what you’re looking for, it does seem a little like a shot in the dark. 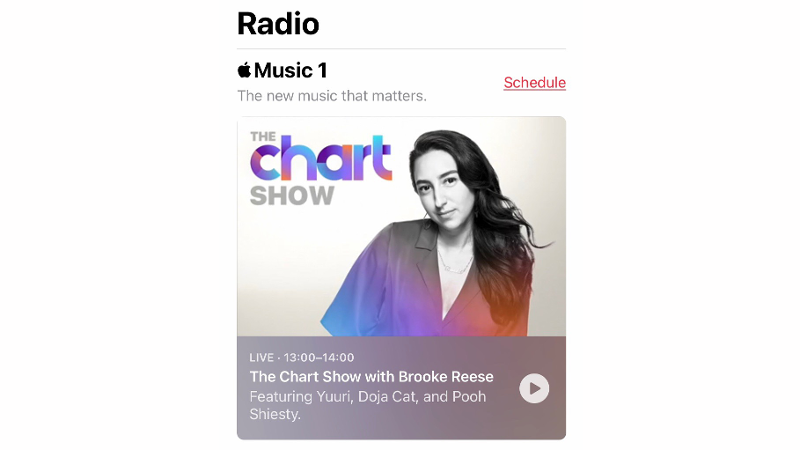 One of the standout features for Apple Music is the Radio section. In here you’ll find Apple Music 1, Apple Music Hits and Apple Country Music, which are live radio stations created specifically and exclusively for the service. These are hosted by several famous DJs, and you can also listen to previous shows that are sorted either by DJ or guest artist hosts. To compliment these, there are a selection of genre stations that don’t features any DJs at all. The range of options here are a real strongpoint for Apple Music, so long as you’re happy to trust the choices that Apple’s servers make when it comes to your entertainment.

Finally, there’s the Search option, which behaves similarly to the one on Spotify, with a search bar, plus genre and themed sections that offer playlists, essential albums, new releases and hit singles. Why it’s separated from the Browse section is something of a mystery, as it only serves to make the user experience more confusing.

What devices can I use them on?

As you’d expect, Apple Music is focussed mainly on the company’s own products. You can use the app on iPhone, iPad, Mac, Homepod, Apple Watch and Apple TV. A web version also makes it available for Windows and Chromebook users or you can access the service via iTunes. Apple Music is supported by smart speakers, plus there is a dedicated Android app. While the latter has improved over the years, the reviews on the Google Play Store suggest that it’s not exactly a refined experience at the moment.

Spotify doesn’t have the favoured son syndrome of Apple, so you can use the service on practically any device with the same level of performance. Android, iPhone, iPad, Apple Watch, Mac, Windows, PlayStation, Xbox, Amazon Alexa, Sonos, and just about any other device that supports streaming music.