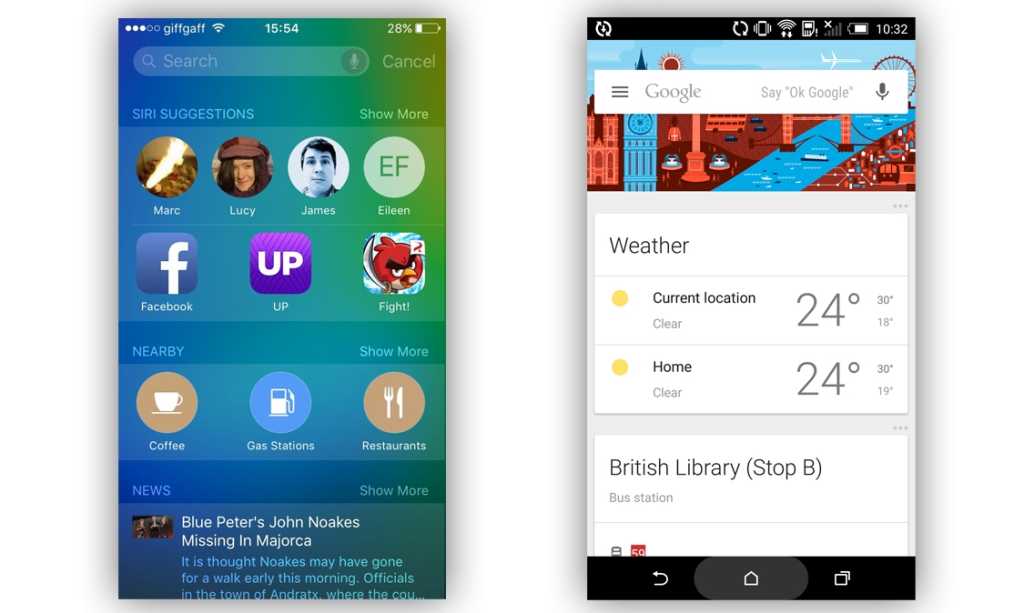 Both services are very promising but we can’t really choose a winner until Proactive is officially released later this year, so make sure you check back in September for a thorough comparison.

All eyes were on Apple at its WWDC conference earlier this month, and the announcement of iOS 9 didn’t disappoint. One interesting feature of iOS 9 is Proactive, a new personal assistant for your iOS device that works alongside Siri. The idea is that it’s supposed to learn your habits and make your digital life a little easier – but what about Google Now? Google’s personal assistant Google Now has been available since 2012, and some have mentioned the similarities between the two.

So with this in mind, let’s take a look at the two services and see just how similar they are.

The biggest similarity between Proactive and Google Now is the search functionality they provide. There are many things that you can easily search for, both in Proactive and Google Now, with currency conversion being a popular search. If you’re headed on holiday and need to know how many euros £100 will get you, you’ve got two ways of finding out. The first is to simply ask Siri or Google Now using your voice, or alternatively you can type it into the search field.

Both Proactive and Google Now display the results natively without the need to open a browser, but the results do vary. Proactive will only display the answer to your question, whereas Google Now will display a Google Search-esque window where you’ll find the answer to your question, along with general search results and additional search options (images, news, etc).

It’s not just currency conversion that makes the search feature of both Proactive and Google Now that makes them great tools. You could search for the latest sports scores, weight conversion, the weather or the latest stocks, just to name a few. Proactive can also search through your messages, email, notes and contacts to find a specific keyword – Google Now can also do this, but it doesn’t have access to your messages (in our experience anyway).

Based on current traffic information, Google Now will display a recommended time to leave along with an overview of the route, and tapping on the card will load up the route in Google Maps. Proactive does things slightly differently – instead of displaying a card, it’ll display a notification letting you know how late you are (if you’re late) and will provide you with a shortcut to get directions from your current location. Nice and simple! 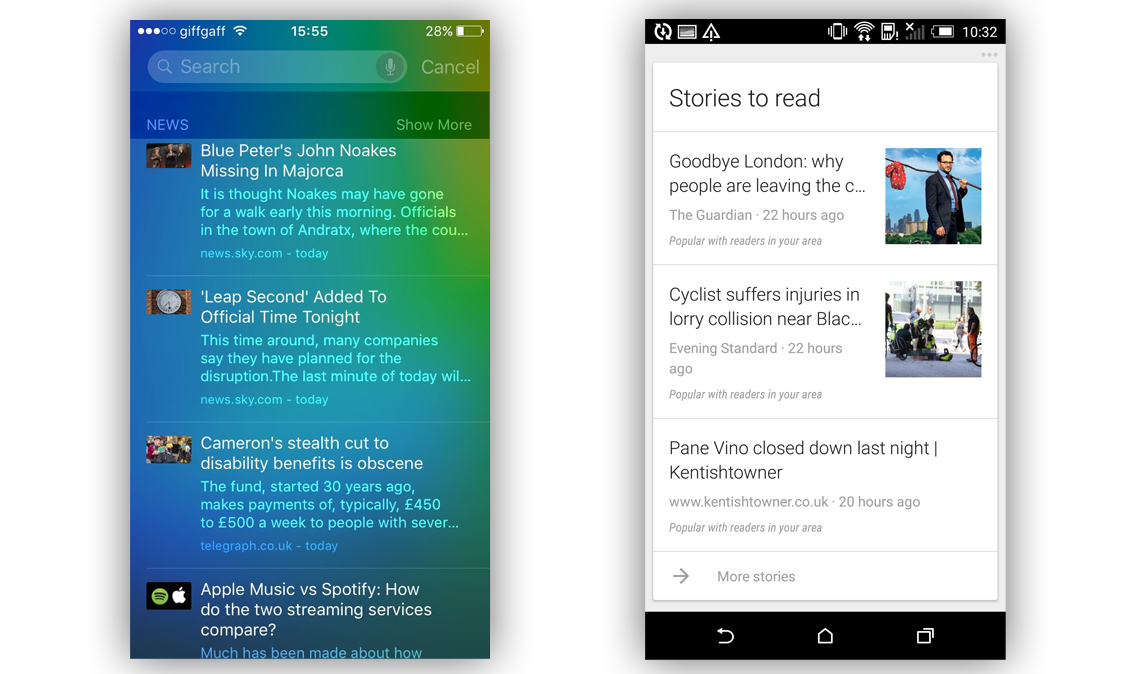 Another similarity between Proactive and Google Now is that both will provide you with news stories, however these are generated differently. As many of us use Google in our every day lives, Google has the advantage of knowing what you’re interested in. It uses these interests to serve you with news articles that it thinks you’d like to read, and in our experience it’s been pretty accurate.

However Proactive works slightly differently – while it too will display news articles, this is based on what’s trending in your area and not based on your interests. This doesn’t seem like a normal thing for Apple to do, and it may change by the time Proactive is officially released in September.

Now we’ve established what’s similar between the two services, lets see what makes Google Now unique. As well as offering all of the above features, it can also offer up some pretty interesting and useful cards if it has access to your email. We were surprised to see that our flights appeared in Google Now days before we were due to fly, even though there were only boarding passes attached to an email and no official flight confirmation emails.

It wasn’t only flights that were displayed within Google Now – we’ve had cards pop up with the status of an Amazon delivery with a shortcut to tracking the package, and even a card displaying our next Virgin Media bill and the date it was due to come out of our bank accounts. It’s a very interesting experience, and Google really does offer up interesting ways to keep on top of everything. 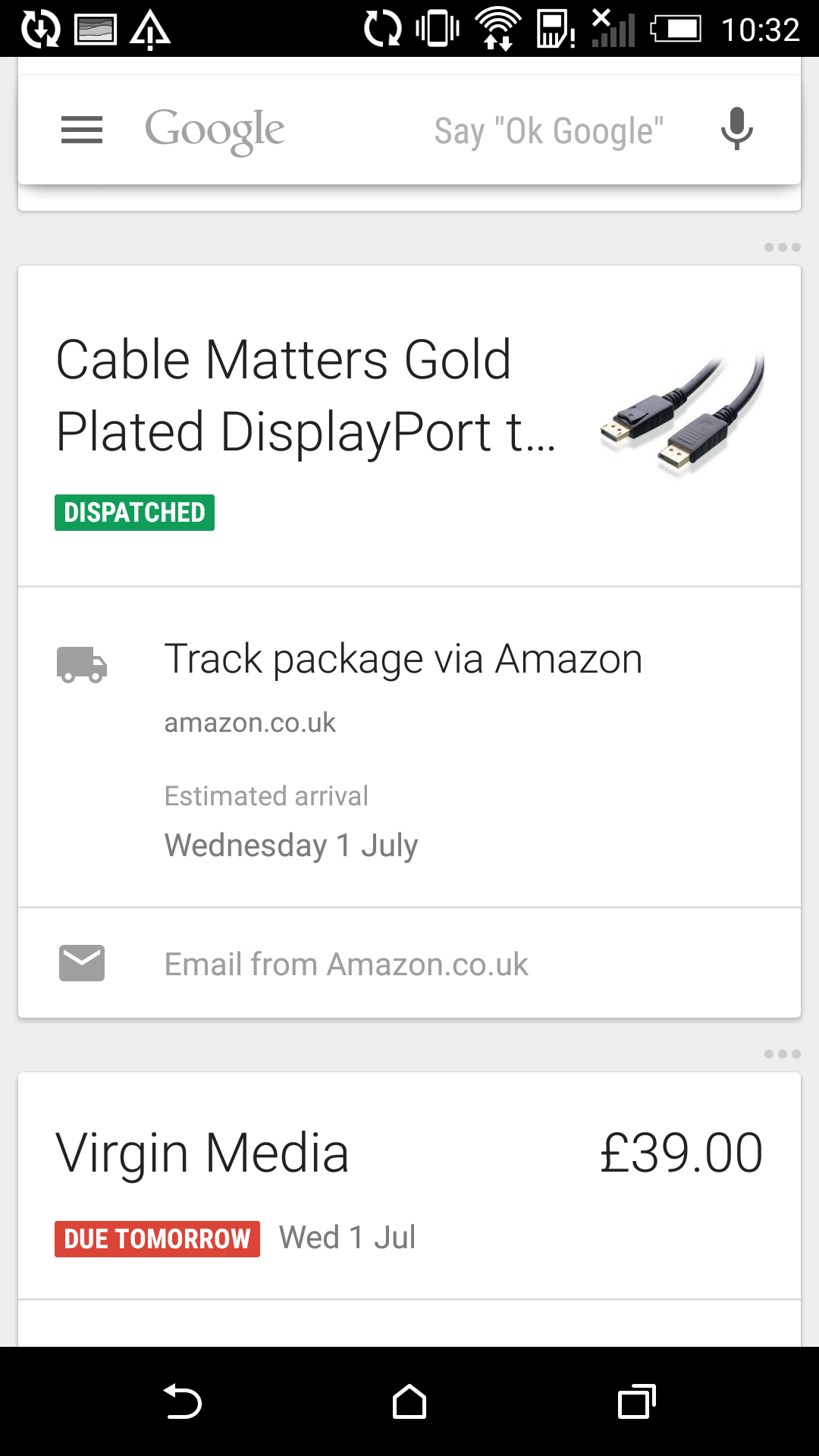 As well as displaying useful information from your inbox in Google Now, the personal assistant can also display nearby events and places that may be of interest to you. For places of interest, it’ll display an image, name, average star rating, how far it is from your current location and even its opening hours (if available). Tapping on the card will open Google Maps and provide you directions to the chosen location. Though it’s not as good as services like Foursquare, it could definitely help if you’re unsure of what’s available in the area.

One of the best features of Google Now is one that every motorist needs in their lives. If you’ve been shopping and forgotten where you’ve parked, you can ask Google “Ok Google, where is my car?” and Google Now will display a map with a pin showing you where you left your car. Google automatically tracks the last stopped position of your car – if it detects your car has been stopped for an extended period of time, it’ll place a pin in that location. Cool stuff, eh?

So we’ve discussed the unique features of Google Now, it’s only fair that we talk about Proactive too. For starters, Proactive will suggest contacts based on a number of factors – call/text frequency, location and even past habits. Lets say, for example, you always call your mum on a Sunday afternoon for a chat. Instead of having to manually open the Phone app, select your mum from your contacts and call her, you can instead swipe to the left of the home screen and quickly access her details via the Search menu.

Upon accessing Proactive, you’ll be presented with icons of frequently contacted contacts, with a similar look and functionality to how frequent contacts are currently displayed in the multitasking menu in iOS 8. Tapping on an icon reveals shortcuts to message, call or FaceTime (if applicable) them, as well as an info button to open the contacts details in the Contacts folder.

This isn’t only for contacts either, as Proactive will also suggest apps based on your habits. These will be displayed directly underneath the suggested contacts, and will often list your most used apps.

It doesn’t stop at a suggestion though – lets say that you listen to music on your iPhone on the way to work every morning. Proactive will notice that you do this, and upon plugging in your headphones on your morning journey, the Music app will automatically start playing music and a shortcut to the app will be displayed in the bottom left hand corner of your iPhone’s lock screen.

Google Now offers suggested events and places near your current location, and while Proactive doesn’t offer the exact feature, it offers something just as helpful that will be a lifesaver for those of us that travel. Upon accessing the Proactive menu, you’ll be presented with a handful of vividly coloured icons that represent nearby points of interest. These icons enable one-tap search for places including fast food restaurants, bakeries, car parks and even petrol stations (just to name a handful).

Tapping on any one of these icons will open Apple Maps, where you’ll be presented with a list of nearby locations that apply to your search criteria. The results don’t only include the location itself, but will also include a star-based rating system, Yelp! reviews and the total distance to the location.

You can also pan around the map itself to see where the results (which are displayed as Pins) are in relation to your current location. Tapping on a result should present an option to get either walking, driving or public transport (if its supported) directions to your chosen location.

Apple has also decided to address the issue of unknown callers with a smart caller ID powered by Proactive. How does it work? Whenever you get a call from a number that isn’t stored in your contacts, iOS will search through your emails to find a possible match. If a match is found, the senders name will be displayed underneath the number. However if no result is found and the caller is calling from a landline, the origin of the call will be displayed underneath the number, giving you a better idea of who the caller could be.

See also: How to use Proactive in iOS 9