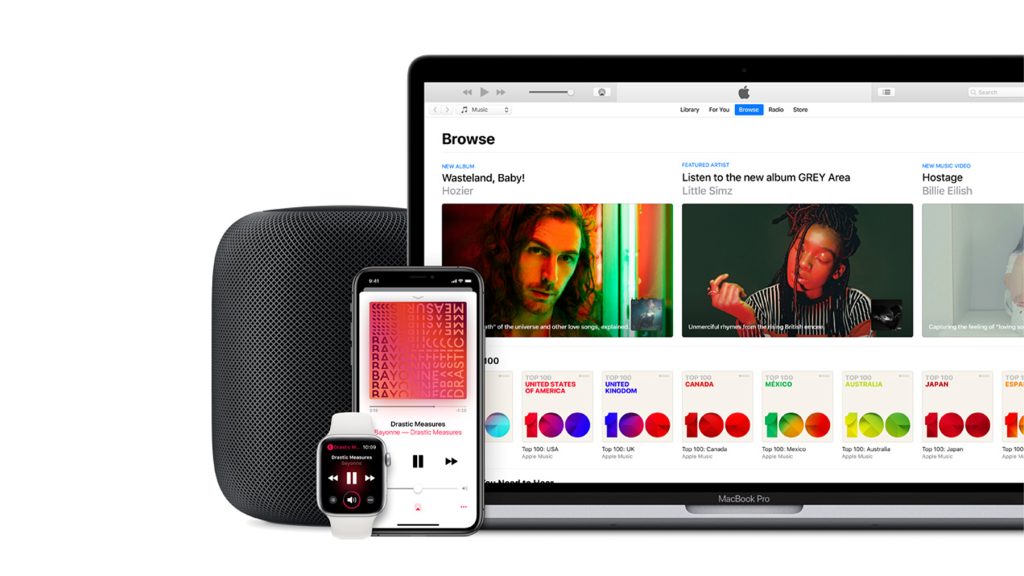 Apple Music is a polished experience, with a huge array of choice, pleasing design, and the excellent Beats 1 radio station that can help you discover new and exciting artists. If music is your passion, then this is the one. But if you just want some extra tunes and already have an Amazon Prime account, then Prime Music is essentially a freebie that is well worth exploring before signing up to any other service.

The music-streaming market is more competitive than ever, with virtually all of tech’s big dogs wanting a piece of the increasingly juicy pie. Two of the more popular services are provided by Apple and Amazon, both of whom are close on the coat-tails of industry leader Spotify.

Amazon Prime Music is available as part of the Prime service. Many people sign up for this simply to get free next-day delivery, but it also entitles them to TV and movies on Prime Video, plus Kindle books though Prime Reading.

Apple Music (which we review here) has no such inducements, but it remains the most convenient service for anyone using an iPhone, and at present the only one that’s fully integrated into Apple’s HomePod – although you can also use Amazon Music, Spotify, Audible and other services on HomePod via AirPlay.

But which is the best service for you? In this article we compare Apple Music and Amazon Prime Music (as well as Amazon’s more expensive Music Unlimited service) for features, range of songs, user-friendliness and value for money, so that you know what each has to offer.

Let’s start with the top-line features and highlights offered by each of the services.

The key differentiator for a lot of people will be the price tag.

That’s a pretty standard price for music streaming services in the UK and US, and if you use it often enough can be a really good way to save money on buying albums and singles from iTunes. There’s also the added bonus of saving space on your iPhone as the songs are stored in the cloud unless you download them for offline listening.

You can sign up for a three-month trial of Apple Music here or by opening the Music app on your iPhone and tapping the For You tab. (You may need to open Settings and go to Music > Show Apple Music.)

Amazon Prime Music cannot be bought on its own; the music service is bundled as part of Prime membership, which costs £79/$99 a year or £7.99/$12.99 a month – significantly less than Apple Music – while also including next-day delivery, Amazon Prime Video and Amazon Prime Reading.

It’s worth signing up to the free trial of Amazon Prime (click here in the UK or here in the US) if you haven’t done so already, as it means you’ll be able to try all of the aforementioned features for one month to see whether you think it’s worth the money.

As with Apple Music there’s a family plan: it too costs £14.99/$14.99 a month (or £149/$149 a year) and gives access for up to six people. If your budget won’t stretch that far, there’s a single-device plan that allows access on a solitary Amazon Echo or Fire TV but costs just £3.99/$3.99 a month. You can even sign up for that through the device itself by saying “Alexa, try Amazon Music Unlimited”.

One of the most important selling points for a music streaming service is the selection of songs. Apple Music beats Amazon Prime Music in this department, and by a long shot too. Apple offers a whopping 50 million songs, while Prime has just two million. This balance is immediately redressed if you sign up with Music Unlimited, however, which also has 50 million tracks on offer.

Of course, the value of these large libraries depends on how mainstream your tastes are; and having that many tracks at your fingertips doesn’t matter if you don’t like them. If you’re a massive fan of one or two artists in particular it’s worth checking they’re available on your service of choice.

Apple Music has had a few notable, albeit usually temporary, exclusives on particular albums, but with Amazon’s media clout you can be sure it will have some of its own.

One area where Apple Music outstrips Amazon is with music videos, so if you like to watch your favourite artists, this might be something that tips the balance.

Apple is notoriously unwilling to play nicely with other companies’ platforms, while Amazon is much more easy-going. But in the case of music streaming both firms offer fairly decent compatibility.

What devices can stream Apple Music?

Apple Music works on iPhone, iPad and Mac, and because Google doesn’t have an issue with Apple Music appearing on Android, it works on most rival phones and tablets too. The service is also available on the Apple Watch, HomePod, in CarPlay-compatible vehicles, and through Sonos speakers if controlled via an Apple or Android device with the Sonos Controller app, Alexa, or via AirPlay.

What devices can stream Amazon Music?

Amazon Prime Music and Music Unlimited work on pretty much all smartphones and tablets, with dedicated apps for iPhone and iPad and another for Android. If you’re on a Mac or PC you can also download a desktop app or use the web player.

As you’d expect, Amazon Prime Music works on a wide range of Alexa smart speakers, Fire TV, Fire tablets, plus there several non-Amazon devices that support the service. Check out the full list.

Working out what music you’re going to like is a hugely important aspect of a streaming service. We’ve already established that Apple and Amazon offer a mind-bending number of tracks. The problem isn’t having enough songs – it’s finding the ones that are good.

When it comes to discovering new music, both Apple Music and Amazon Prime Music claim to offer intelligent, user-sensitive recommendations, but based on our experience with each service we much prefer Apple’s approach.

Apple Music has a tab called For You, which offers up regularly updated playlists (curated by experts in that field or genre), artist spotlights, new releases and timely content for you to enjoy. 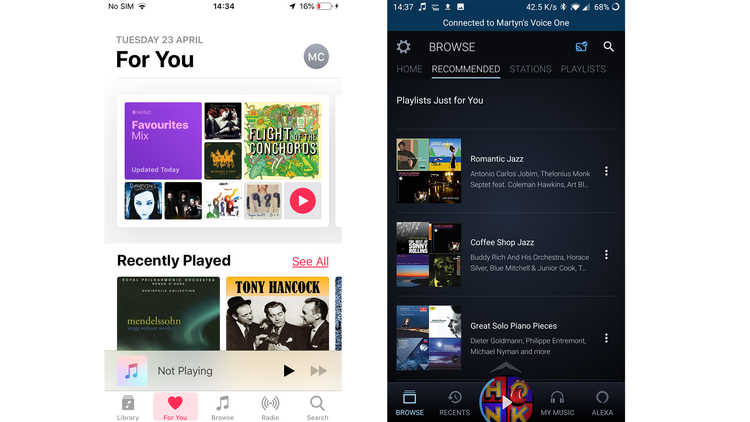 The tracks in For You are influenced by your tastes as Apple Music understands them: for example, we were told during our testing that particular albums were offered “since you’re into blues”. While this was fine, we found that it takes a bit of time for Apple Music to get to know you well, but this can be sped up by proactively feeding the app information about what you like and dislike. Over time it will start consistently recommending songs that are of interest.

For more direct discovery you can use Apple’s Search or Browse tabs instead, filtering by genre or viewing playlists related to specific moods, activities and events.

Amazon Prime Music uses your previous purchases and listening history to work out your taste, and also allows you to tap on the + icons next to tracks and put in your My Music section so you can build up a collection of favourites. During our time using the service so far it has recommended largely the same tracks and we can’t find a reliable way to tell it what we really like and dislike.

Amazon does offer a decent playlist section, though, with moods and genres to choose from which included ‘Best of Prime Music’, ’50 great 80s classics,’ ‘Morning cup of coffee’ and more during our time with the service. Of course, Music Unlimited offers even more playlists than its junior version thanks to the much larger selection of tracks available.

Apple Music is by far the nicer service to look at, although perhaps it has a bit too much going on in some sections. The For You tab has so many different types of recommendation, all clamouring for your attention, that it can be almost overwhelming. There’s a healthy selection of playlists, albums, spotlights and new releases (each of which can be horizontally scrolled).

To be fair, many will spend most of their time in the Library and Radio tabs, which are far easier on the eye and brain. And if you’re struggling to get used to Apple Music, try our How to use Apple Music guide. 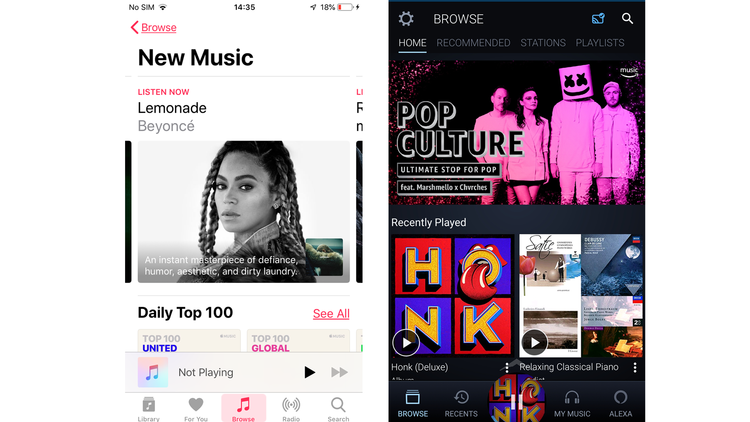 Amazon favours a darker palette, but there’s just as much on offer in terms of playlists, new albums releases, and radio stations being promoted on the home tab. The Recommended section feels a little sparse in comparison to Apple’s approach, giving the impression that the design isn’t quite as polished.

Navigation is similar on both, with sections accessible by options at either the top (Amazon) or bottom (Apple) of the screen. Tracks that are playing in the background are listed at the base of the screen, but the awkward play button on Amazon Music that requires pushing up to enter the track screen isn’t quite as easy to use as its Apple alternative.

Amazon Prime Music offers ‘stations’ but they’re not really the same as a full-blown radio feature, something we consider a big black mark in comparison to Apple Music’s brilliant radio options.

Beats 1 Radio, for instance, is a live radio station that plays globally 24 hours per day, with DJs such as Zane Lowe, Julie Adenuga, and Ebro Darden bringing something unique to the platform with interviews, live sessions, and the introduction of emerging artists to listeners. There are also lots of additional channels to choose from that play a huge range of songs with as many skips as you like based on a particular genre or mood.

Amazon Prime Music can’t beat Apple Music when it comes to the user interface, catalogue (unless you pay extra for the Music Unlimited service), recommendation engine or radio features, but that isn’t really the bottom line here as what it offers is yet another bonus of signing up to Amazon Prime. It’s a lesser but still serviceable music-streaming service for those who can manage with fewer songs and features, and when paired with the additional benefits of Prime it’s a tempting route to go down.

If music is your focus, though, go for Apple’s offering. Apple Music is perfect for listeners who want to enjoy a huge range of songs, discover new artists, watch music videos, and be entertained by Beats 1 with its great range of DJs.