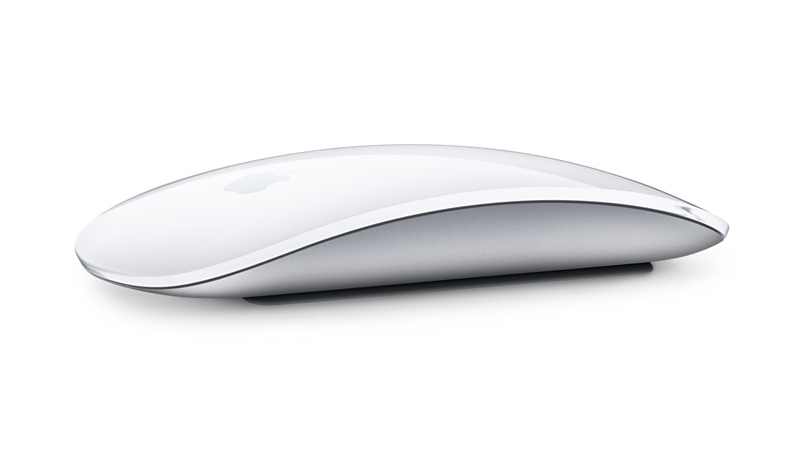 The Magic Mouse was always an acquired taste. It looks quite lovely and offers some neat, fun gestures, but you can’t help feeling that, as with most of Apple’s mice over the years, minimalism has been achieved at the expense of usability. It’s too flat – and sleekly symmetrical – to fit comfortably in most hands (which further impacts the effectiveness of the more advanced gestures, which are harder to activate when you haven’t got a confident grip of the mouse), you only get two mouse buttons, and it’s all too easy to grab it the wrong way round when you’re not looking. Aside from these issues, the problem with the Magic Mouse 2 – which is also lovely-looking – is that so little has changed in six years; perhaps Force Touch would be asking too much, but a virtually identical design and no new gestures is disappointing. You do get a noticeably smoother action on the table, mind you, and a rechargeable battery is an admirable step forward, even if the placement of the charging port is irritating – not disastrous, thanks to the quick-charging feature, but definitely irritating. We’re going to give this a rating of 3/5, but you should know that it spent much of this article flirting with a 2. Your reviewer finds the physical shape of both Magic Mouse 1 and 2 frustrating, but peripheral design is a personal matter: we recognise that plenty of other Apple fans enjoy these mice and use them all the time. If that describes you, then the Magic Mouse 2 represents an overly cautious but still solid update, with a disappointing lack of new features but an improved action and the removal of the Magic Mouse 1’s greatest weakness – batteries that constantly needed changing. For those of us who like a bit of bulk to our mice, the Magic Mouse is no more appealing than its predecessor.

The Magic Mouse 2, Apple’s follow-up to 2009’s original wireless Magic Mouse, was launched earlier this month alongside new iMacs and a two other ‘Magic’ branded peripherals: the Magic Trackpad 2 and Magic Keyboard. Our Magic Mouse 2 review tests its features, design and build quality, and helps you decide if it’s right for you.

Read next: Which is the best mouse for Mac?

Looking at the Magic Mouse from the top, nothing seems to have changed from the six-year-old Magic Mouse 1. It has the same pure white, reflective gloss finish, with the Apple logo unobtrusively picked out in light grey at the end closest to you. (Since the design is otherwise symmetrical, with no physical button markings on the exterior, this is actually crucial in enabling you to hold the Magic Mouse 2 correctly.) 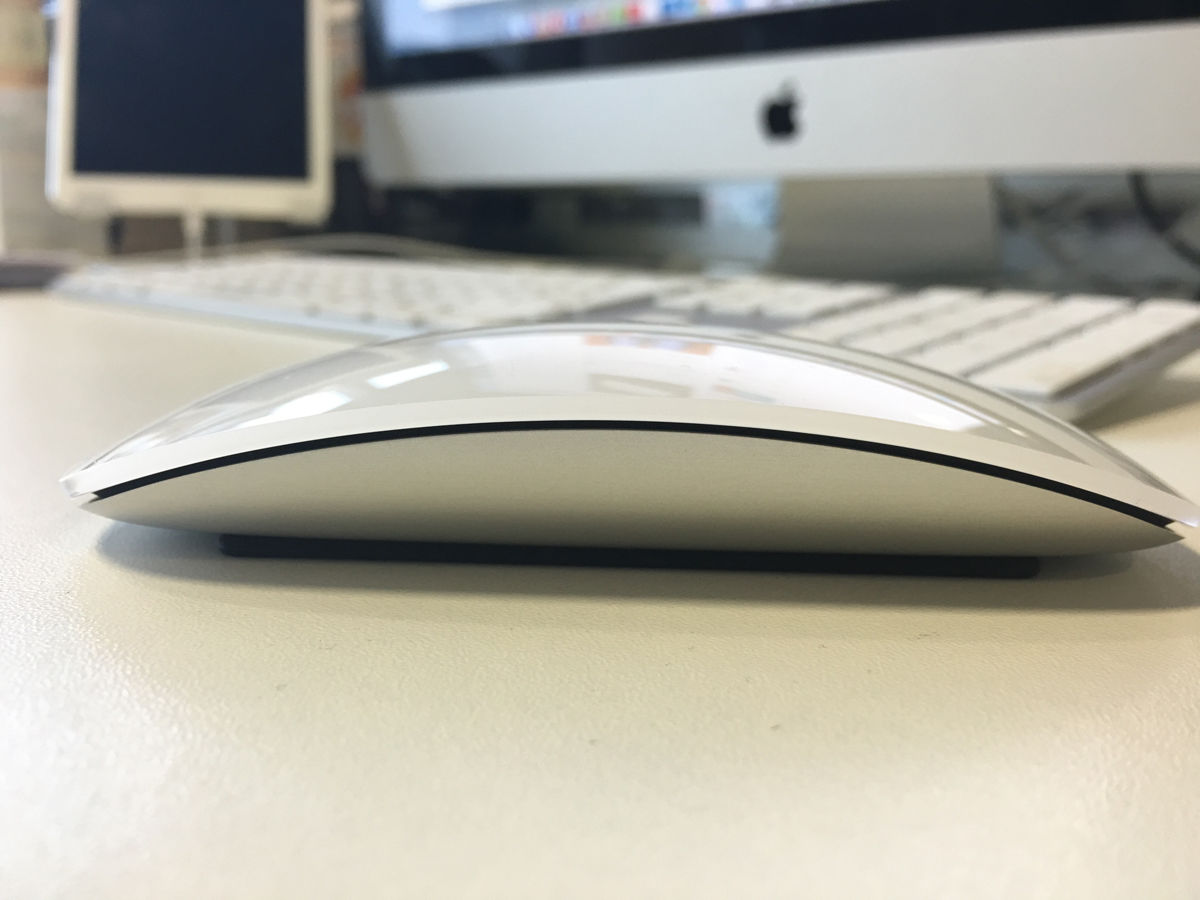 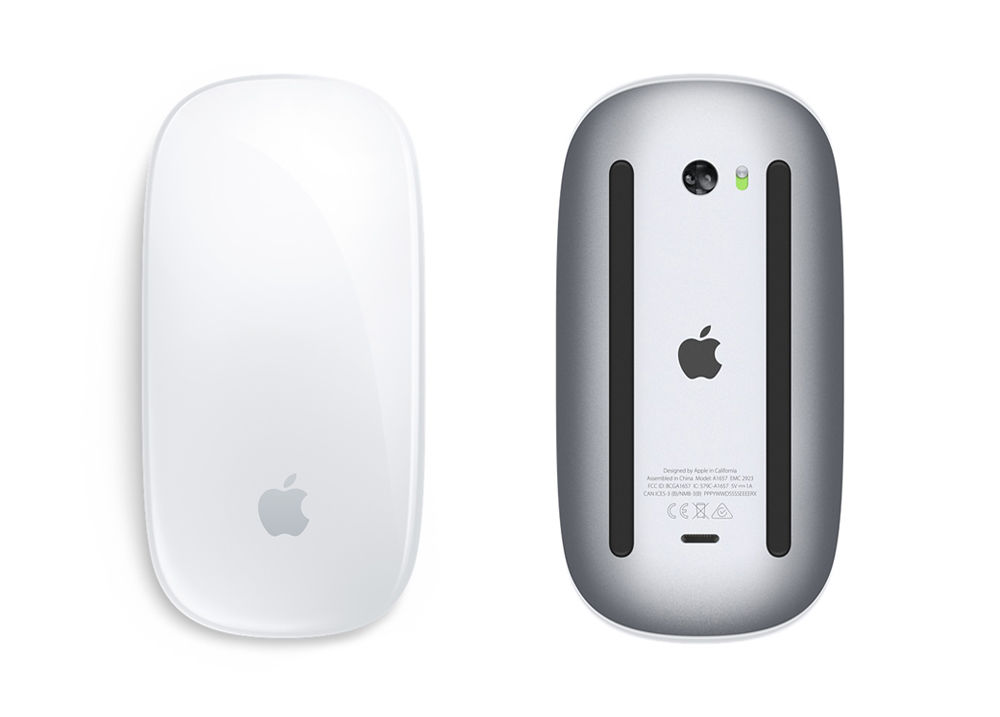 The top surface feels smooth to the touch and provides little resistance when swiping a fingertip to activate one of the gestures that the Magic Mouse accepts, although it isn’t quite as whisper-smooth as the delicious matt surface of the Magic Trackpad 2.

A second but less obvious change lies in the two black plastic runners that the mouse rests on, which now taper to a full curve instead of an asymmetric point. I can’t seem to describe this properly, so just look at the photo below: 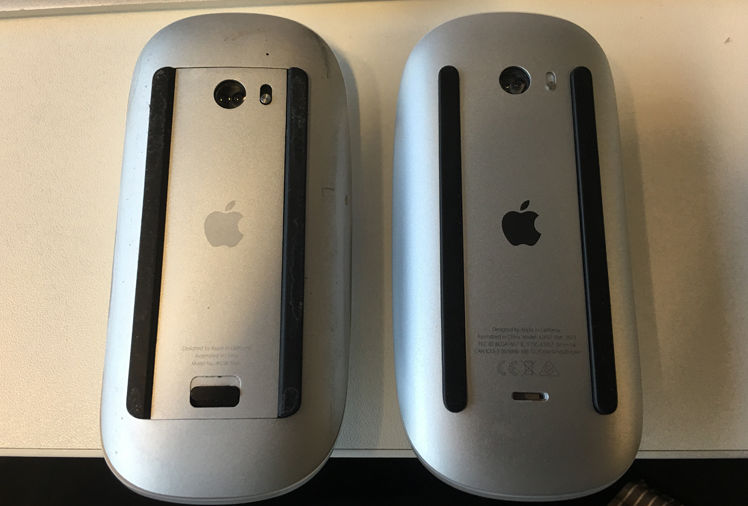 More importantly, Apple has used a different material for the runners, and says the “optimised foot design” results in “a smooth, superior glide with less resistance”; and while it’s hard to accurately compare the smoothness of our six-year-old Magic Mice – whose rails are almost uniformly gummed up with years of desk grime – with this brand-new review sample, the new material does seem significantly better at gliding around on the desk. This is also helped by the new mouse being a little lighter: 99g, compared to 109g for the Magic Mouse 1 (including batteries, of course).

One last difference that’s apparent on the underside of the new mouse: the Apple logo here is now black (to match the plastic rails) rather than off-white. Personally I think it looks a bit smarter, but you’re rarely going to see it. 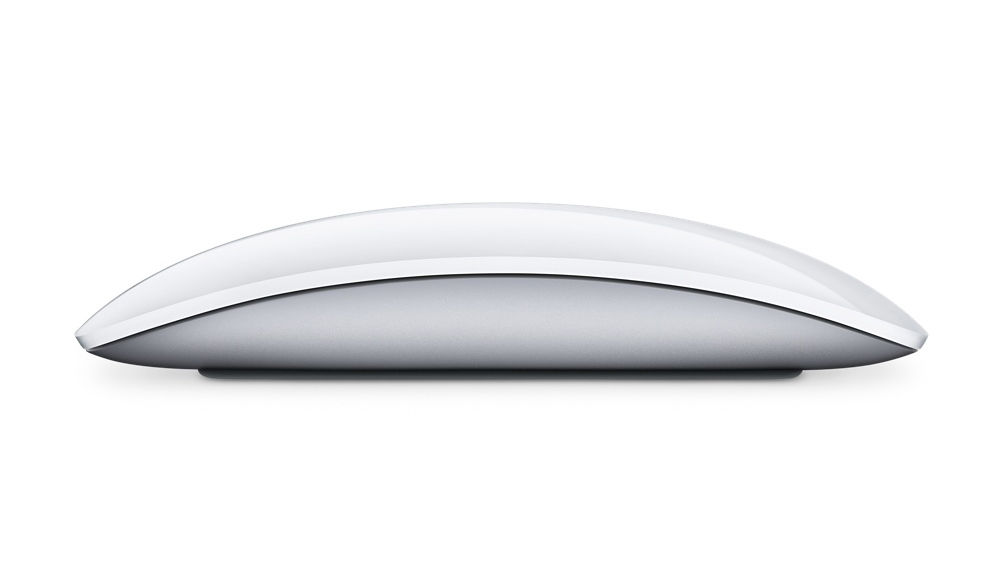 The rechargeable battery is a great improvement on the previous Magic Mouse model, with its ever-dying batteries and fiddly battery case, but there’s a caveat: for some reason – presumably somebody wanted to keep the visible areas of the product free of complications – the port for the charging cable (standard Lightning cable, bundled with the product) has been hidden away on the bottom of the mouse. This means you need to prop the mouse up on its side while charging, and lose the option to carry on using it as a wired mouse when the battery runs out.

(As my colleague Simon Jary puts it, “three cheers for stopping that damn backplate falling off, but a big groan for not thinking properly about where to place the Lightning cable slot”.)

Handily, the Magic Mouse 2 comes with a Lightning cable (left) that you can obviously press into service when charging iPhones and iPads; less pleasingly, it has to lie on its side to be charged (right)

It is worth pointing out, however, that the Magic Mouse is a very fast-charging device: while a full charge (two hours of charging) should be good for a month of typical usage, Apple claims that just one minute of charging will deliver up to an hour’s worth. The fast-charging feature means that if you do find yourself powerless in the middle of a crucial work session, you can plug in for as long as it takes to go to the loo or make a cup of tea and then carry on. It’s not a dealbreaking problem, then, although I still agree with the numerous carpers who find this an irritating design element.

One final thing about the charging setup that I find very mildly annoying: there’s no charging light, nor does the device make a noise when plugged in. This is a small problem, but an occasionally troubling one; if you’ve got a tangle of cables sprouting from your Mac’s general vicinity (not an ideal scenario, admittedly, but I can’t be the only one) and grab one that isn’t actually plugged in, you may not realise your mistake for a while. We’ve all been there.

(You do get some indication that you’ve plugged it in correctly, because a dialogue box pops up upon initial connection to let you know a wireless pairing has been achieved. But this doesn’t reappear when you plug it in subsequently.)

This won’t take long, because setting up the Magic Mouse doesn’t either: simply plug it into your Mac via the supplied Lightning cable, and a Bluetooth connection will be established almost instantaneously. We found this process fast and flawless.

(It’s not fussy about the Bluetooth standard you use, incidentally, although we’ll look at system requirements in more depth later in this article.)

The Magic Mouse 2 enables you to control your Mac with a variety of Multi-Touch gestures, which is great. Less great is that fact that the set of gestures is the same as we had on the Magic Mouse 1, six years ago. You get no new gestures – and no Force Touch for that matter. 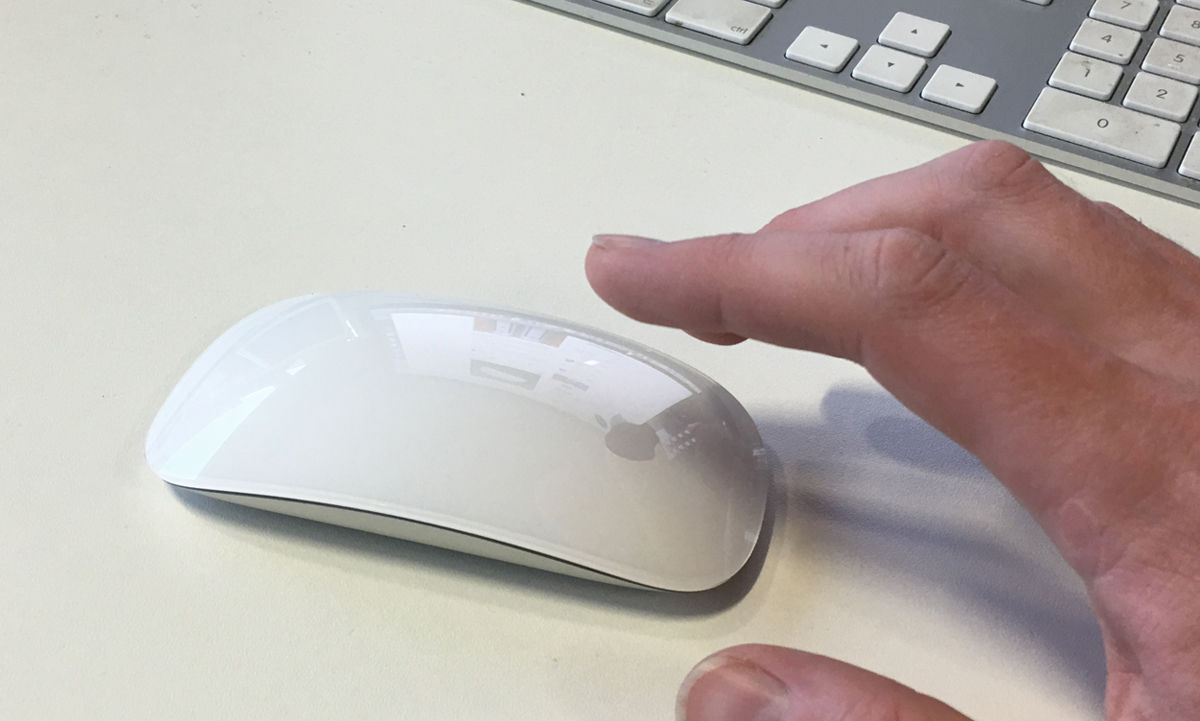 For those who haven’t used a Magic Mouse, here’s a taste of what you can do:

(See also: Gestures to use with a Mac mouse or trackpad)

You also only get two mouse buttons, same as before. (Some PC users might be surprised we even get that many, I suppose.) This is fairly standard, of course, but plenty of us have been spoiled by third-party mice with multiple easily customisable buttons, and may find this a step down. 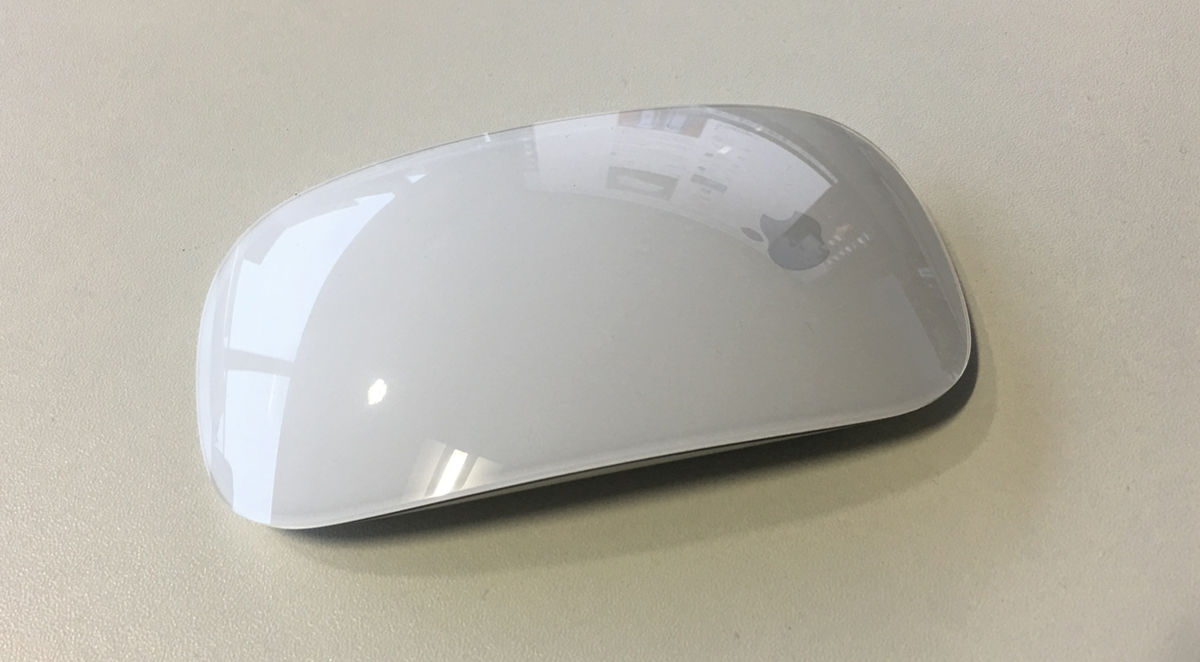 Like the other Magic-branded peripherals, the Magic Mouse 2 requires a Mac running the latest version of Mac OS X: El Capitan. This strikes us a little restrictive, but then again, it is a free update: this means that a huge number of Macs, dating back to 2009 or thereabouts, will be able to work with the Magic Mouse 2 if their owners are willing to make some software upgrades.

You also need Bluetooth, but unlike the Magic Trackpad the Magic Mouse 2 doesn’t demand Bluetooth 4.0. Any version of Bluetooth will do, apparently.

For more detail on the Magic peripherals’ system requirements, see Which Macs work with the Magic Trackpad 2, Magic Mouse 2, and Magic Keyboard?

Magic Mouse 2 review: Where to buy

With Apple products we tend to recommend buying directly from Apple’s website. You can jump directly to the Magic Mouse 2 entry in the Apple Store; at time of writing it’s listed at £65.

Remember to check alternative vendors, however. Amazon UK is currently selling the Magic Mouse 2 for a little more – £69 – but keep an eye out for any savings in the future.