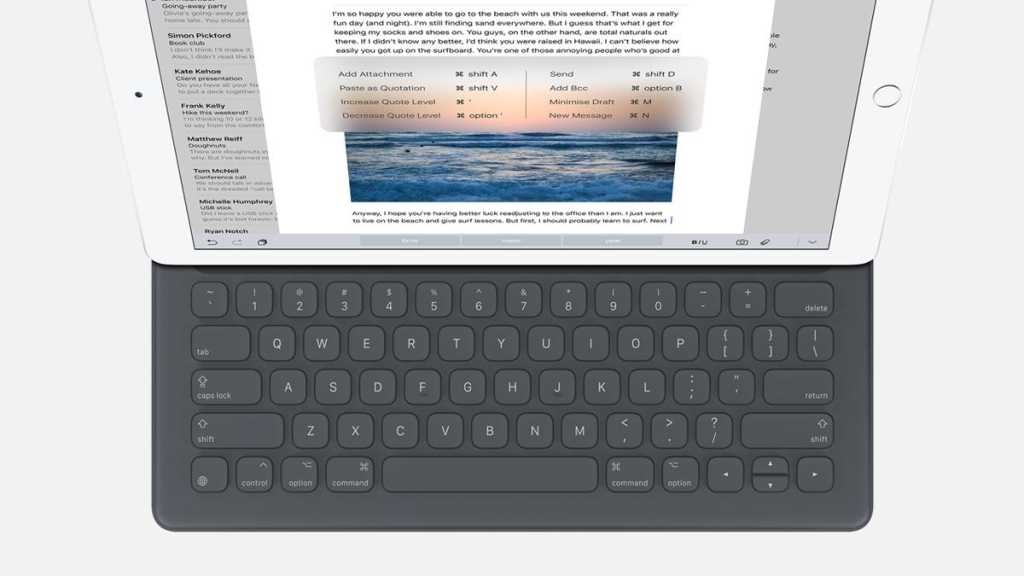 The iPad Pro launched on 11 November, and with it came a new and Apple Pencil stylus and Smart Keyboard accessory designed specifically for the iPad Pro review. We’ve spent time with all three, but here we’re focusing on the Smart Keyboard, which is not only a keyboard to help bring laptop functionality to the 12in iPad, but also acts as a stand and a case to protect the iPad’s screen whilst in transit. Read on for our full Smart Keyboard review.

Read next:  iPad Pro vs MacBook Air – can an iPad Pro replace your Mac? |  Best iPad buying guide | Best cheap iPad deals UK |  How to set up a new iPad |  How to speed up a slow iPad | iPad reviews

I’m writing this review using the iPad Pro Smart Keyboard, and am surprised to find that it’s suitably speedy once you get the hang of it. To begin with, I was making mistakes in almost every word, but it only took a few paragraphs to figure out the positioning of the keys and the amount of pressure required, after which my typing speed came back naturally and I almost forgot I was using it.

That’s while I’m sitting at a desk though. One of the big issues with the iPad Pro keyboard is that it can’t be used on your lap. It’s not sturdy like the keyboard on a MacBook, so you’ll need to find a solid surface to rest it on.

Each letter key is slightly concave – the centre of every individual key is a tiny bit lower than the outer edges. This helps your finger find the its place on the key quickly and easily, to prevent you from making mistakes and to help speed up your typing. 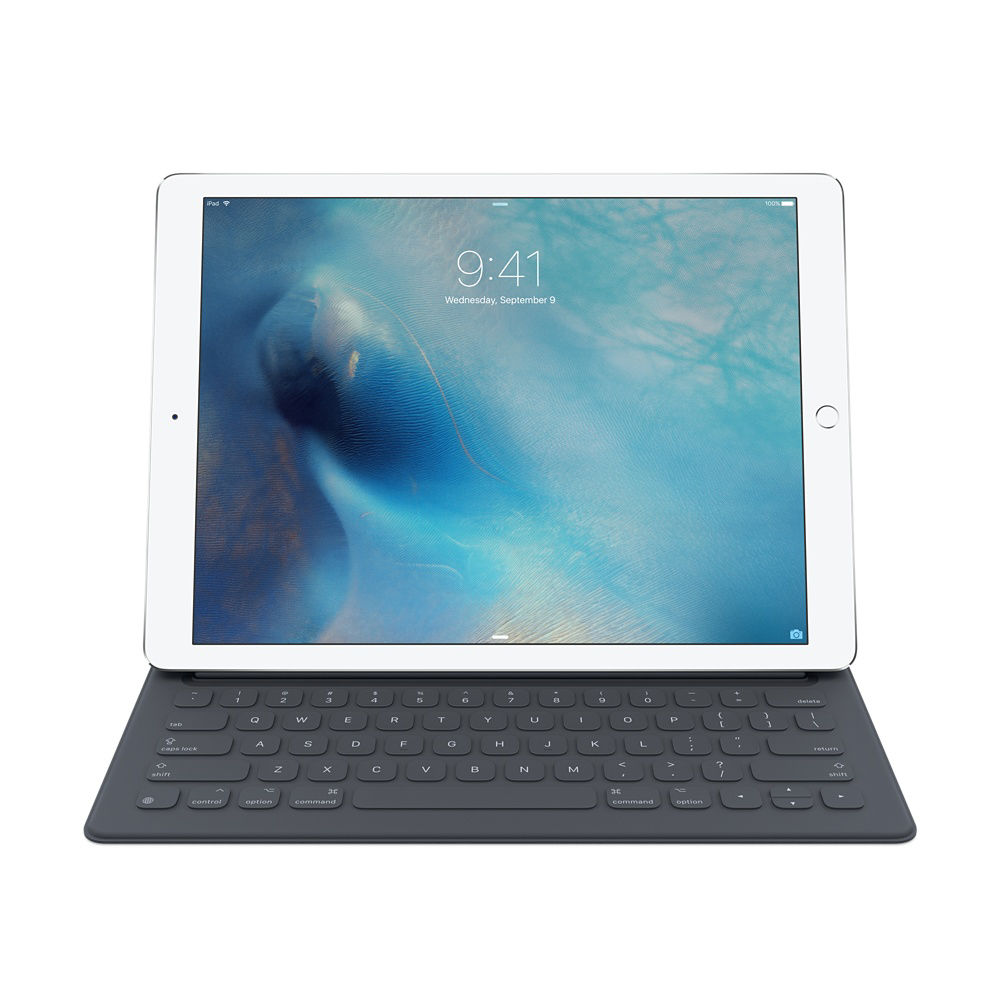 The bigger keys like the shift and delete keys aren’t dipped, but you’ll still find that they’re easy to tap when required, and you’ll find that there are all of the keys you’d expect from a normal full-size keyboard. You’ll also find a dedicated key for switching to other iOS keyboards like the emoji keyboards or a third-party option you’ve installed.

What’s surprising, though, is that there are no dedicated iOS keys on Apple’s Smart Keyboard. Third-party keyboard makers have been including buttons as shortcuts for the Home button, search, brightness and media controls.

Apple has designed iOS 9 to work with the Smart Keyboard, meaning you can use several shortcuts to get things done faster like you can with your Mac. You can find out what the shortcuts are in any app by holding down the Command, Option or Control key. 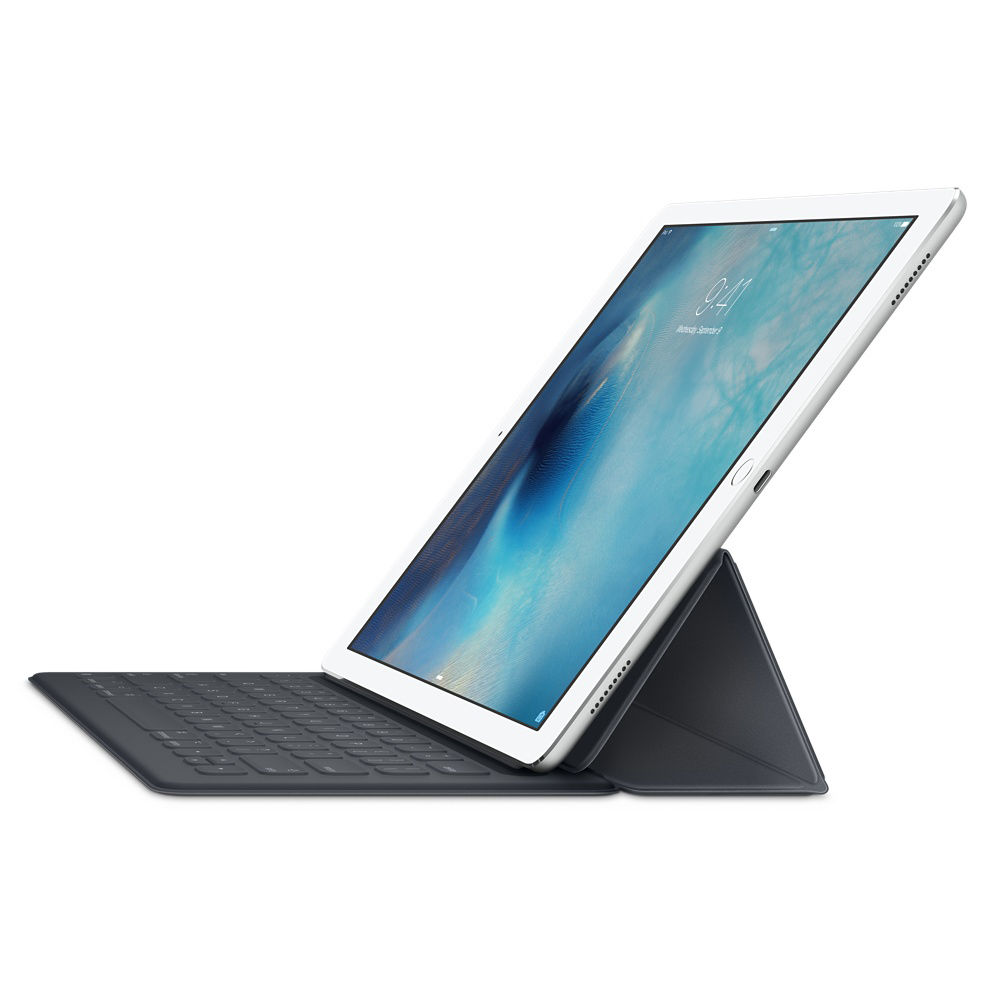 You’ll find that the Smart Keyboard can hold your iPad at an ideal angle for use while typing, and that it’s sturdy even when you need to use the touchscreen of the iPad itself. It’s also ideal for watching movies or FaceTime calls even when you don’t need to use the keyboard itself. The stand can only be used in landscape mode, of course, as the keyboard is connected to the longer edge of the cover, but that should suit most users.

I really liked feel of the Smart Keyboard’s material, too. It’s smooth to type on but it’s also durable, made with custom-woven fabric that we imagine will hold up against grimy fingers small spillages thanks to its seamless design. When being used as a case, all parts of the Smart Keyboard that touch the screen are covered in a soft microfiber material, and the outside is a polyurethane material. It’s a bit disappointing that it’s not made with leather considering the price of the case, and we know from experience that the polyurethane looks well-worn after a few months of being carried around in a bag. It’s also only available in a dark grey colour at the moment – we’d have liked a navy blue option too.

Plus, the cover only protects the front of the iPad so the back is vulnerable to dents and scratches. You’ll need to invest in an additional Smart Keyboard compatible shell case to protect the aluminium back. Apple’s own offering costs £65.

Where the Smart Keyboard’s design does shine is in its low profile. It’s only 4mm thick, which is pretty impressive, so you’ll hardly be adding any bulk to the iPad. It does weigh 336g, though so you’ll find that it adds a bit of weight.

One of the biggest downfalls of the iPad Pro’s Smart Keyboard for us here in the UK is the lack of a UK keyboard layout. The only option you’ll get is a US English keyboard layout, which means no pound key. That’s disappointing when you consider how much money you’ll be spending on the keyboard. It costs a whopping #(there’s an example of the problem with that lack of a pound key)139, which is a hefty sum once you’ve already shelled out for the iPad Pro itself, which’ll set you back over £600.

You’ll never need to charge the iPad Pro’s Smart Keyboard. Instead, it connects to the tablet using magnets in the Smart Connector and uses conductive material to pass data from the keyboard to the iPad and power from the iPad to the keyboard.

As mentioned, the iPad Pro will cost you £139. That’s a lot of cash to spend on an iPad accessory, particularly when you consider that you can get the Magic Keyboard for £79 from Apple and that’s compatible with your Mac as well as iOS devices, and offers an overall better typing experience. Of course, the Magic Keyboard isn’t as convenient to carry around and lacks the stand and cover functionality, but if the Smart Keyboard was around that price point we’d be much more likely to buy it. For £139 we’d like to see a back cover, backlit keys and the butterfly key design, as well as colour options and a UK keyboard layout too! Maybe we’re asking a bit much, but Apple is asking for a bit much from us, too, we think.

Additionally, you’ll find it tricky to get your hands on a Smart Keyboard at the moment. On Apple’s online store it’s suggesting you’ll have a wait of 4 to 5 weeks at time of writing.

Read next: iPad Pro vs MacBook Air – can an iPad Pro replace your Mac?