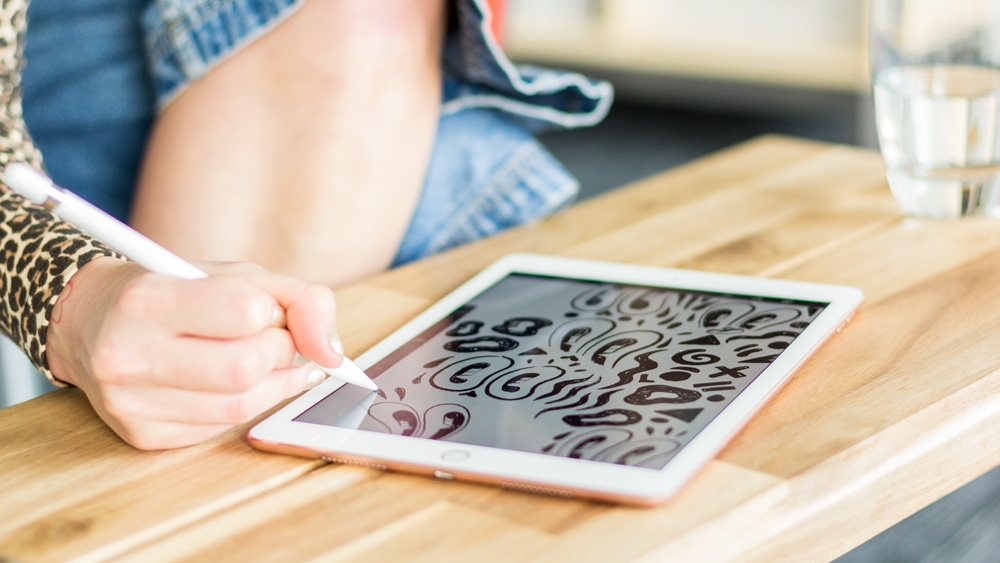 Even though the iPad Pro 12.9 is the most expensive iPad in the range, it’s beaten by its smaller, cheaper brother in almost every aspect. The iPad Pro 9.7 has improved screen technology, more colour options and upgraded cameras while still featuring the four-speaker setup and Smart Connector that users of the larger iPad Pro love. It’s a confusing move by Apple, especially as the larger variant only went on sale just before Christmas. We’ll update this comparison and verdict with more information once we’ve spent a bit more time with the new iPad.

Apple’s September 2015 event was a doozy – the company announced the iPhone 6s & 6s Plus along with a brand new Apple TV, a new iPad Mini and of course, the long-awaited 12.9in iPad Pro. While it was announced in September 2015, the large iPad Pro wasn’t available to buy until late November in many places around the world. Four months on from when the (fairly expensive) 12.9in iPad Pro hit shelves, Apple announced a smaller 9.7in iPad Pro – while this seems logical, Apple’s smaller and cheaper ‘Pro’ tablet offers functionality that its bigger brother doesn’t. Is it worth spending the extra money for a larger display? Here, we compare both models of the iPad Pro in terms of design, features, spec, cameras and software.

Read next:  Best iPad buying guide | Best cheap iPad deals UK |  How to set up a new iPad |  How to speed up a slow iPad | Which iPad do I have? | iPad reviews |  iPad Pro vs MacBook Air – can an iPad Pro replace your Mac?

Both the smaller iPad Pro 9.7 and larger iPad Pro 12.9 are similar in terms of design – in fact, apart from the size of the display, we’d go as far as to say they’re almost mirror images of each other. The iPad Pro range, much like the iPads before it, is crafted from an aluminium unibody that feels great in the hand and also allows the tablets to be lightweight and nice to hold in the hand. This is especially important with tablets as holding a 9.7 (or 12.9) inch display for an extended amount of time will take its toll on anybody, and comfort is key to the success of any product.

Let’s talk specifics. Of course, the 12.9in iPad Pro is larger than its 9.7in counterpart and is a little bulkier too. The iPad Pro 9.7 measures in at only 6.1mm thick compared to the iPad Pro 12’s 6.9mm and while this may make the larger iPad sound bulky, it’s the same width as Apple’s iPhone 6s and thinner than the 6s Plus, making it pretty impressive for such a large tablet. The iPad Pro 9.7 also wins in the weight category, weighing in at 437g compared to 713g, but when compared to the 766g (minimum) weight of the 12in Surface Pro 4, the iPad Pro 12.9 is still fairly lightweight. 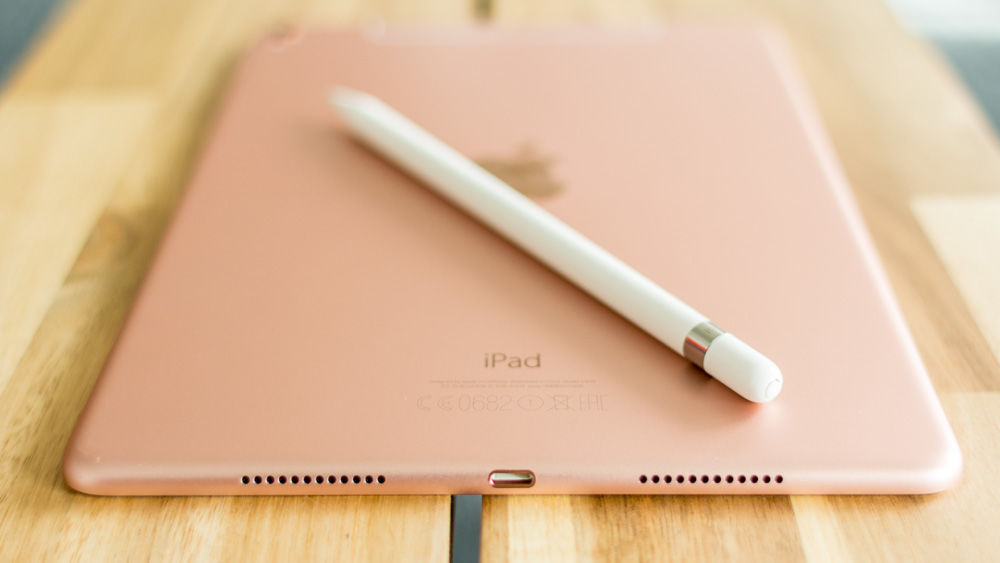 Apart from that, both the iPad Pro 12.9 and iPad Pro 9.7 feature a four-speaker audio setup that’ll automatically adjust itself based on the orientation of the iPad, along with the inclusion of a Smart Connector. The Smart Connector allows the iPad Pro to connect directly to the accessory (usually keyboard cases, but this may change in future) and provide it with power & data connections, negating the need to charge accessories and use Bluetooth connectivity.

There are a couple of key differences between the 9.7 and 12.9 iPad Pros though, namely to do with the colour options and the camera. The iPad Pro 12.9 is available to buy in either Silver, Space Grey or Gold while the iPad Pro 9.7 can be bought in the same colour options plus Rose Gold, a new option that first made an appearance on the iPhone 6s back in September 2015. While we’ll leave the specifics of the camera to the ‘features and spec’ section below, the camera system used in the iPad Pro 9.7 means that it now features the same camera bump the current iPhone line-up is infamous for. This means that it may slightly wobble when tapping corners of the display when laid flat, an issue that the larger iPad Pro 12.9 doesn’t suffer from.

It’s only when you compare the features and spec of the 9.7 and 12.9in iPad Pros that you start to notice the difference between Apple’s ‘pro’ tablets. Let’s first discuss the tablet displays because even though you’d assume the technology would be the same across both devices, you’d be wrong. Of course, both displays are LED-backlit, offer multi-touch support and a fingerprint-resistant oleophobic coating, but that’s where the similarities end. The 12.9in display of the larger iPad Pro boasts a higher resolution display (2732×2048) than its smaller counterpart (2048×1536) but due to the difference in screen size, both boast a pixel density of 264ppi. 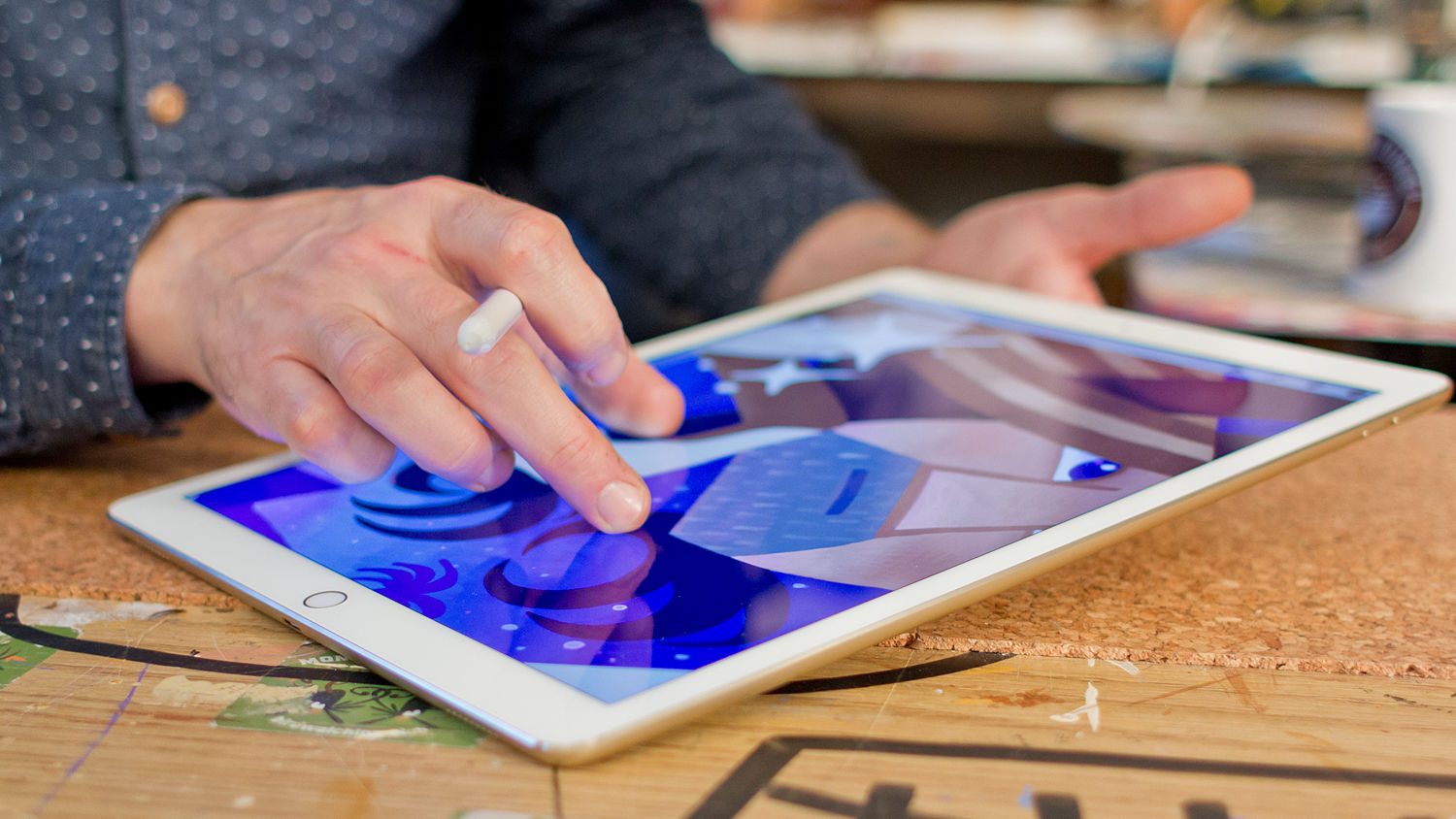 However, it seems that the iPad Pro 9.7 has the upper hand in terms of the display despite costing less than its larger counterpart. Why? Apart from being the “brightest and least reflective [display] in the world” according to Apple, the 9.7in display features the same colour space as the digital camera industry and provides a 25 percent wider colour gamut than older iPads. This means that the colour reproduction is more accurate and brighter than before, offering a new level of quality in Apple’s display.

It’s not the only new addition either, as the iPad Pro 9.7 also features a ‘True Tone’ display that uses four-channel ambient light sensors to adjust the colour temperature of the display to match your environment, which should provide a more comfortable and natural reading experience.

When compared to the 64bit A7 chipset featured in the iPhone 5s, the iPad Pro 9.7 CPU is 2.4x faster and its GPU is 4.3x faster and while that is impressive, the iPad Pro 12.9 offers a 2.5x faster CPU and 5x faster GPU. We suspect that this is due to the amount of RAM included in each device – though Apple doesn’t officially state how much RAM is included in its tablets, iFixit teardowns reveal that the iPad Pro 9.7 has half the RAM of its bigger brother, featuring only 2GB of RAM compared to 4GB of the iPad Pro 12.9. Both devices offer a range of storage options – 32, 128 & 256GB – giving users larger storage options than any previous iPad.

Apart from that, both models of the iPad Pro feature Apple Pencil support, a first-generation Touch ID sensor built into the Home button and of course, support for Apple Pay. In terms of connectivity, both feature dual-channel Wi-Fi, Bluetooth 4.2 and LTE cellular capabilities (depending on the model you buy). It’s worth noting that the cellular variant of the iPad Pro 9.7 features an embedded Apple SIM, allowing users to use the iPad around the world without having to change the SIM (charges still apply though).

Read next: Is it possible to get a free iPad? The truth about free iPad scams

The only other noticeable difference with regards to the hardware of the two tablets is in the camera department. Yes, after years of including (arguably) sub-par camera systems on the iPad, Apple has acknowledged that users want a decent camera on an iPad. The only issue is that the upgraded camera system only made its way to one of the two iPad Pros – the iPad Pro 9.7. 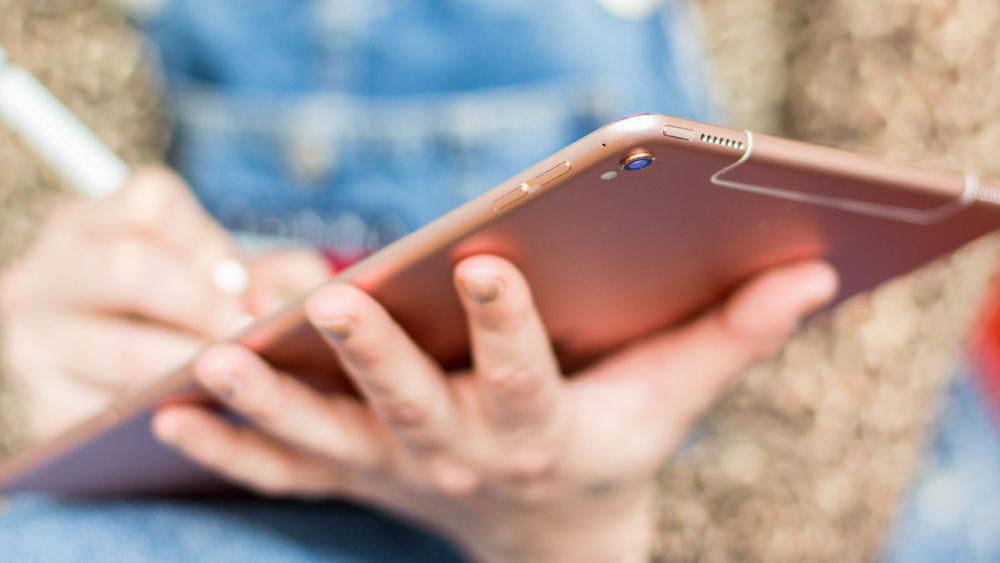 While the iPad Pro 12.9 camera setup doesn’t necessarily sound bad, it’s only when it’s compared with the camera system of its smaller, cheaper brother that you start to become disappointed.

The iPad Pro 9.7 boasts the same camera setup as the iPhone 6s, with an upgraded rear-facing 12Mp camera and True Tone flash, making it the first iPad ever to feature a flash. The sensor itself has been upgraded to perform better in low-light conditions, and features ‘cinematic’ video stabilisation. The front facing camera has had an upgrade too, now featuring a 5Mp camera compared to a 1.2Mp. In terms of video, the rear-facing camera is capable of recording 4K@30fps or 1080p@60fps and the front-facing camera can handle fairly standard 720p.

Both the iPad Pro 9.7 and iPad Pro 12.9 ship with Apple’s latest operating system, iOS 9. The operating system brings with it a myriad of new features including, most recently, Night Shift mode which adjusts the colour temperature of your display in the evening to make it easier on your eyes and (hopefully) easier to sleep. It also brings improvements like password protected Notes, and introduced Apple’s News app too.

While these features plus split-screen multitasking are available on both iPads, there are a couple of features specific to the iPad Pro 9.7. The first is ‘Hey Siri’ support – Apple’s virtual assistant can be activated hands-free by saying “Hey Siri”, ideal for when you’ve got your hands full or if you want to set a reminder on the fly. We’re not quite sure why this isn’t available on the top-end iPad Pro 12.9, especially as we know that the larger variant is more powerful than the smaller one.

Along with ‘Hey Siri’ support, the iPad Pro 9.7 also features Live Photos support. While it doesn’t include 3D Touch technology in the screen featured in the iPhone 6s to be able to activate them, users can still take and activate Live Photos. Live Photos capture a short video clip of before and after the photo was taken, and presents this in the form of a GIF (with audio) that can be activated at any time with the aim of ‘transporting’ you back to the moment it was taken.

iPad Pro 9.7in vs iPad Pro 12.9in: Pricing and availability