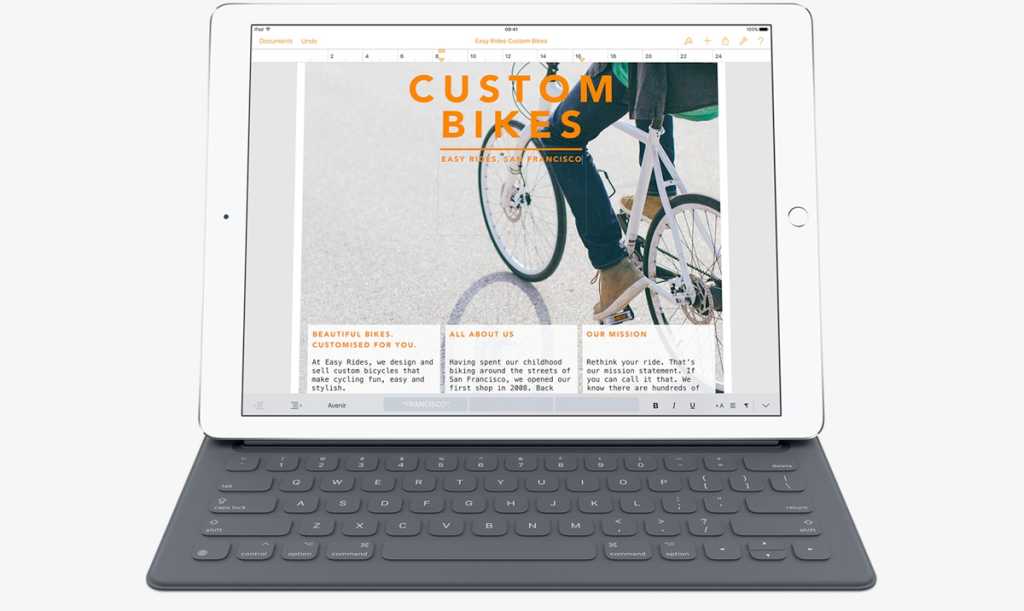 The Smart Keyboard for 9.7-inch iPad Pro is a solid accessory, albeit one that represents a compromise compared to conventional keyboards. Typing on it is in our experience slower and less accurate than on a full-size keyboard, but to a degree that’s an inevitable corollary of its size, and it’s still one of the better mini-keyboards we’ve tried. We like the feel of the fabric cover under the fingers, and while the shallow key action makes it less satisfying to use than a full-size or conventional keyboard, it’s more solid than such a lightweight accessory has any right to be. The Smart Connector is one of this device’s trump cards – you don’t need to worry about battery life, or a Bluetooth connection, because everything is handled through that port. But there will be alternative keyboards that also use that connector: we expect Logitech to release a 9.7-inch version of its popular Logitech Create Backlit Keyboard Case before long, and that will probably be a bit cheaper.

You can buy the 9.7-inch Smart Keyboard direct from Apple.

The Smart Keyboard is an attractive and slimline iPad cover that doubles up – triples up – as a keyboard and stand.

In many respects it’s like the old Smart Cover: it covers and protects the iPad’s screen when closed; it lies flat against the back of the device when open; and if you fold it up into a triangular prism, it forms a simple but sturdy stand that props up the iPad (in landscape orientation) at a convenient viewing angle for working. The difference is that, in this last position, there’s a keyboard in front.

If you can cope with the distraction of that keyboard, it’ll serve as a perfectly decent stand for watching movies or FaceTime calls (you can actually fold the keyboard out of sight in stand mode, but it’s quite fiddly to do and a little less stable because of the weight of the keyboard), but it’s obviously targeted mainly at workers. 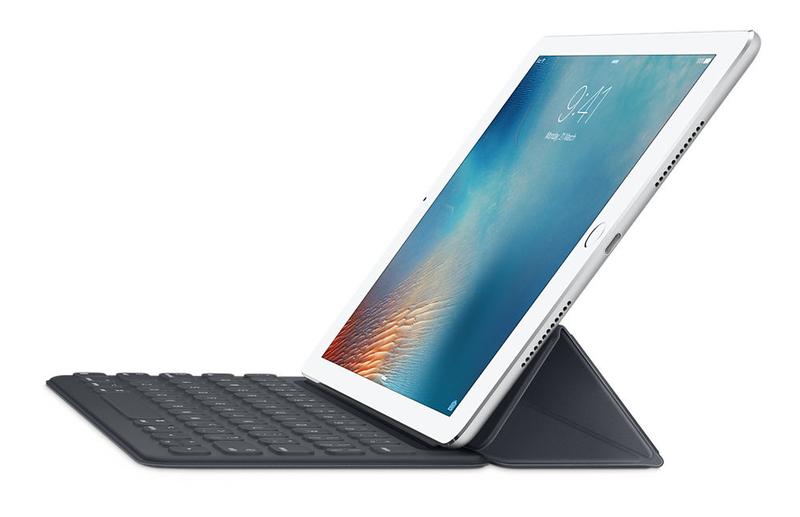 (The Smart Cover had a fourth position: laid against the back of the iPad but with one of its segments folded back so you can use the camera. That is possible with the Smart Keyboard, just about, but the keyboard section makes it much more awkward – it either sticks out on the lefthand side or has to be folded into a triangular form instead of sitting flat.) 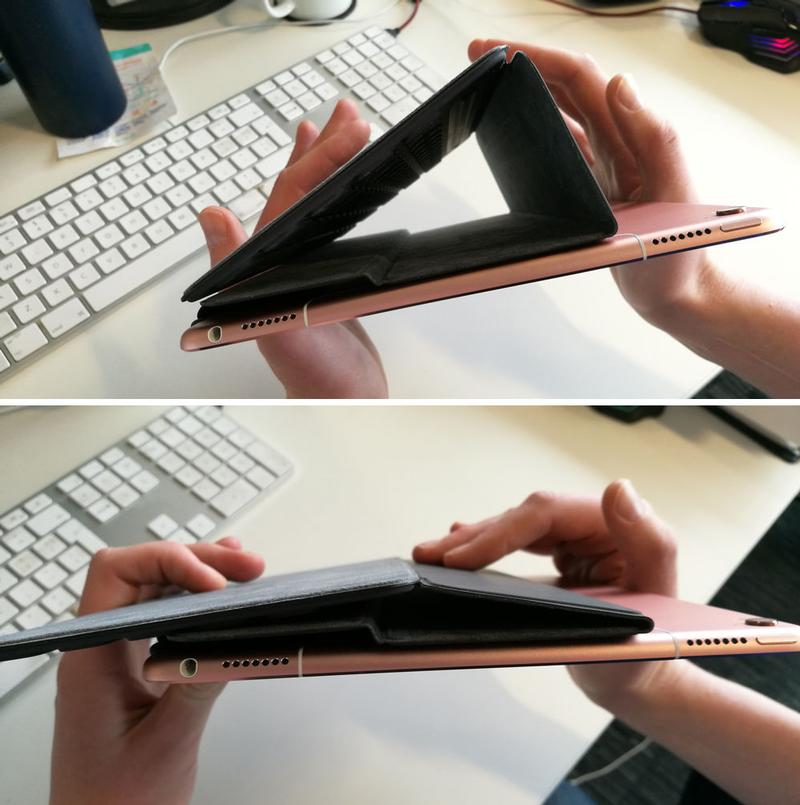 The keyboard itself is seamless: unlike conventional keyboards, with separate keys and cracks for crumbs and spilled liquid to disappear down, it’s completely covered in resilient, custom-woven fabric. It’s smooth to type on – more on the typing action in a moment – but also durable, and should cope well with grimy fingers. The keyboard and inner lining of the older and larger 12.9-inch Smart Keyboard has stood up well to six months of reasonably regular use, so we expect the 9.7-inch model to last well too.

When being used as a case (and again like the Smart Cover), the Smart Keyboard swaddles the iPad’s screen with a soft microfibre lining, while its exterior is clad in a polyurethane material. We found it slightly disappointing that it’s not made of leather, considering the price, and we know from experience that, unlike the keyboard and soft lining, the polyurethane exterior will start to look worn after a few months of being carried around in a bag. (It’s only available in dark grey at the moment, too – we’d have liked a navy blue option.)

As usual with covers (as opposed to cases), the Smart Keyboard offers incomplete protection for the iPad. When it’s closed, the back of your device is vulnerable to dents and scratches. But covers are less bulky and lighter than all-over covers, and the Smart Keyboard is impressively svelte: it weighs just 225g.

That low weight might be part of the reason why the two review samples we tried both had the tiniest tendency to lift up at the front. The 12.9-inch version of the keyboard that we tried didn’t do this.

A couple of final word on layout: the Smart Keyboard is currently only available in US English, and doesn’t feature the media playback keys – play, pause, volume controls etc – that you get on a Mac keyboard, or on the Logitech Create keyboard for the 12.9-inch iPad Pro.

We found typing on the 9.7-inch Smart Keyboard less than ideal, but it’s still better than most keyboards of this very small size.

For reasons of weight and slimness, the keys have a shallower action than those on a standalone keyboard for a desktop Mac – instead of a pleasing butterfly or scissor mechanism, the keys are kept in position by the tension in that covering fabric we mentioned earlier – and this makes them less satisfying to use. But it’s not horrible, as micro-keyboards can be: it still feels solid under the finger. 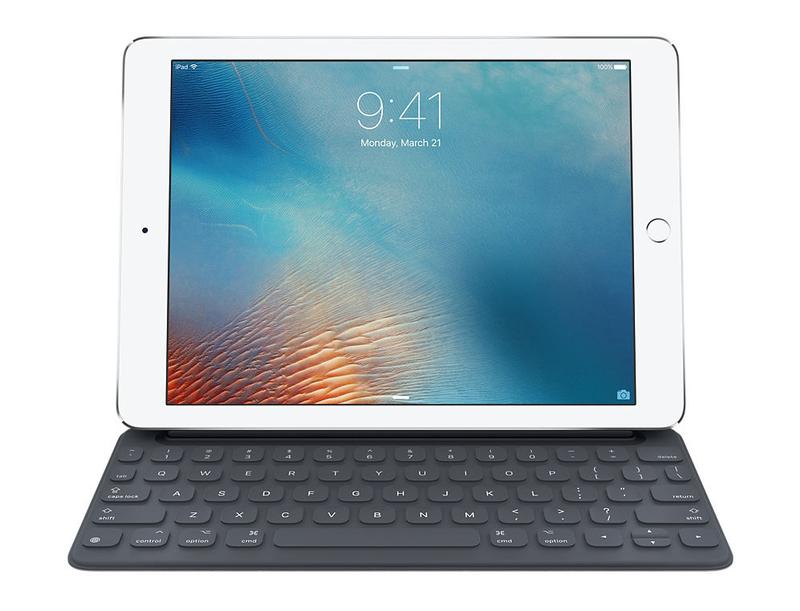 The layout of the keys should be generally familiar (expect for the unfortunate lack of a UK-specific model), but the keys are both a slightly different shape (more rounded) and significantly smaller and more cramped together than most typists will be used to. Indeed, the keys are fractionally smaller than the pad at the end of this reviewer’s fingers, whereas the 12.9’s keys are slightly larger than them, which feels like a significant difference.

These factors mean that typing on the 9.7-inch Smart Keyboard is quite slow and inaccurate, at least at first: switching from the 12.9in Smart Keyboard, or certainly from a conventional keyboard, is painful.

Practice will be rewarded, however, and considering its size this certainly isn’t a disaster: reducing the size of the keys, and pushing them closer together, was absolutely necessary in order to fit the whole thing into an accessory of this size, and Apple has done the best with what is available. If you want a 10-inch keyboard, you’re simply not going to get a slick, super-accurate typing experience right away. And this is one of the better mini-keyboards we’ve tried. 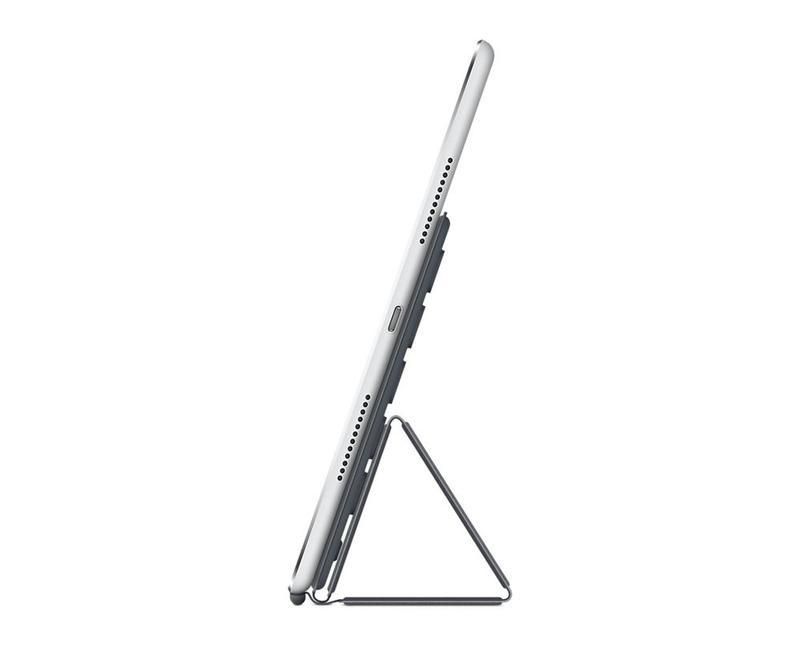 Unusually for a tablet keyboard accessory, the Smart Keyboard has no issues with battery life. It connects magnetically to the iPad Pro 9.7 via the Smart Connector, and uses conductive material to pass data from the keyboard to the iPad and power from the iPad to the keyboard.

The Smart Keyboard for 9.7-inch iPad Pro costs £129 if you buy direct from Apple.