We’re thoroughly enjoying iOS 10 and its new features. Raise To Wake is a charming idea. The ability to at least hide preinstalled apps is long overdue, and much appreciated. The changes in Messages would be easy to mock but a) they’re aimed at a user base considerably younger than your humble reviewer, b) are entirely optional and c) are actually a lot of fun anyway. And there are so many smart, useful changes throughout the rest of the OS that we simply couldn’t cover them all here. At this late stage in iOS 10’s lifecycle – iOS 11 is already at the public beta stage – it’s extremely stable and the initial teething problems and bugs have been ironed out. But the jury is still somewhat out on the widespread opening up of 1st-party functions to 3rd-party development – Siri and Messages, notably – which will live or die depending on the enthusiasm and innovation of Apple’s software partners. They’ve never failed the company before, but these things take time. This is a quietly impressive update, with a raft of enjoyable and/or useful new features. Our advice for anyone with a relatively recent iPhone or iPad would be to make the update, which is after all free. Just bear in mind that you won’t be able to revert to an earlier version of iOS because Apple stopped signing iOS 9 a while back.

Welcome to our review of iOS 10, the current version of Apple’s operating system for iPad, iPhone and iPod touch. We examine the interface, features and system requirements of iOS 10and help you decide if it’s right for you. (If you’d prefer to read about the imminent update, currently in beta but expected to launch in September, here’s our iOS 11 review.)

Note that, as with any major software update, there have been bugs in iOS 10: we look at these in more detail in our iOS 10 troubleshooting tips article. But the majority have since been fixed via point updates.

If this review convinces you of iOS 10’s merits, here’s how to install iOS 10.

There hasn’t been a system-wide visual redesign like there was in iOS 7 – I don’t imagine we’ll get anything as radical as that again for years – but there are still some significant design changes in iOS 10. Apple has focused its efforts in this department on the lock screen, the search/notification page reached by swiping from the left of the lock screen, and the Notification Centre. 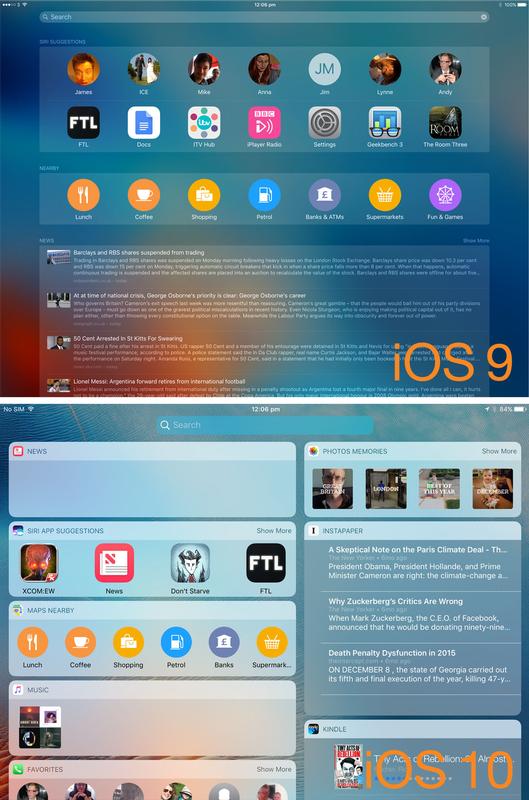 There’s also a new feature that means you’ll see these screens more often, so we should probably talk about it here rather than in the new features section. It’s called Raise To Wake, and means that, like the Apple Watch, an iOS 10-equipped iPhone will light up its screen and show you the lock screen when you lift it up. No more blasting accidentally through to the unlocked home screen thanks to superfast second-gen Touch ID.

This feature doesn’t apply to iPads, though.

The lock and notification screens have been redesigned and expanded in scope. A lot of these changes are focused on 3D Touch, which is a bit of a pain for those of us running iOS 10 on older iPhones, or iPads of any vintage, but it’s clear that Apple is following a strategy of drip-feeding the feature more and more throughout the system.

There are two generations of iPhone on the market with 3D Touch, and a third likely to launch in autumn. And it seems likely that a 3D Touch-equipped iPad will emerge at some point.

Notifications continue to become more interactive with each generation of iOS. Most of them can be 3D Touched to get a quick glance at the vital information; and iOS 10 enables live updates within the notifications themselves, so you can open an iMessage notification, then carry on a conversation there and then, with live replies appearing as they’re received, without having to open the Messages app.

There is also the inclusion of widgets working in a larger format, allowing them to be a lot more useful for different types of apps.

One last change to the lock screen that we really like: to open the Camera app from here, all you need to do is swipe in from the right. It’s a natural evolution from the old system, which placed an always-accessible (but small) camera icon on the lock screen, but a lot less fiddly.

Apple outlined 10 key features that have been changed, added or redesigned – and we look at them in detail in our separate article The 10 best features of iOS 10 – but in this review we’d like to focus on slightly fewer… while mentioning a couple that Apple didn’t.

Messages is the most-used app on iOS, and gets plenty of love in iOS 10.

Most of the changes are visual and relatively superficial, however. And lots of them involve emoji.

There are lots of other visual effects you can apply to your messages, and again, most of them are a bit silly. But one we rather like is ‘Invisible ink’, which scrambled the text or image in your iMessage until the recipient swipes across it – nice for delivering pleasant surprises. And hopefully not for dumping people. 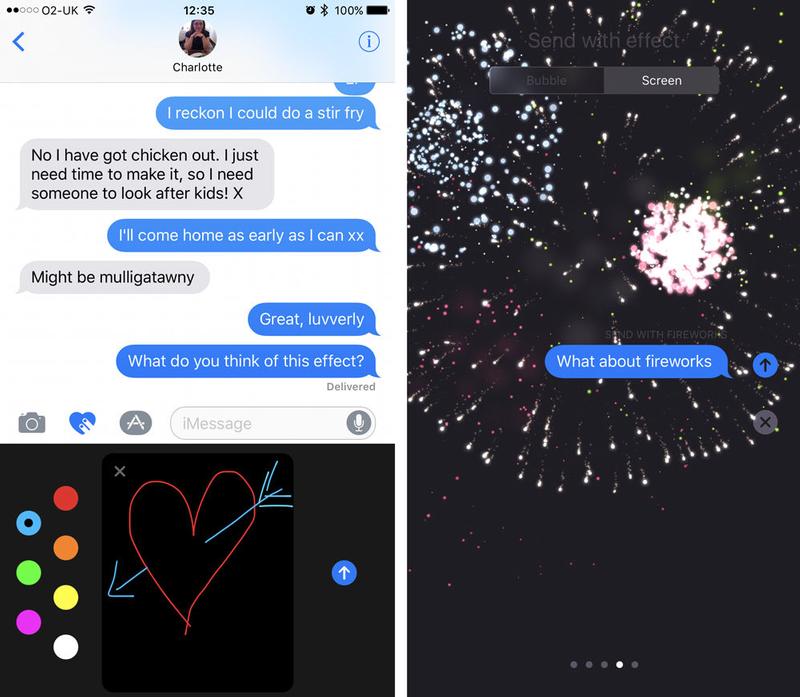 There is also the ability to enable or disable read receipts, where you’ll be able to change it per contact or group. As another feature, you can now also send low-quality images through the Messages app.

Emoji are now displayed at three times the size in Messages, and will be suggested (where appropriate) by QuickType’s predictive text. And if you’re partway through typing a message and tap the icon to open the emoji keyboard, iOS will scan the text for any word that has an emoji equivalent, and turn them orangey-gold; you can just tap the ones you want to be ’emojified’ (sorry) or see the various options if there are more than one that apply to that word. 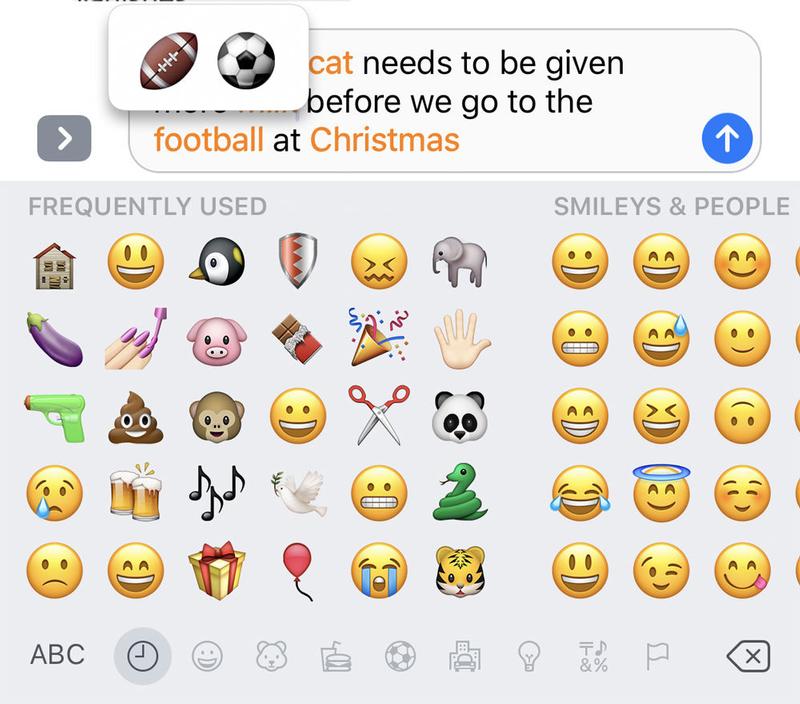 Apple has also replaced a few old emojis and added plenty of new ones. Most famously, the gun emoji now displays as a water pistol, for reasons that we believe may be at least partly political, but Apple hasn’t made a statement regarding this.

It’s important to note that the emoji remains the same, code-wise, and if you send that emoji to someone with an Android phone it’ll display as an actual (or cartoonish) gun on their device; and if they send you what they think is a gun, you’ll see it as a water pistol. This seems like an odd way of doing it (Apple could have created a new toy gun emoji, and removed the gun from the default tray without stopping it displaying if someone sends it to you), and a potential cause of misunderstandings. 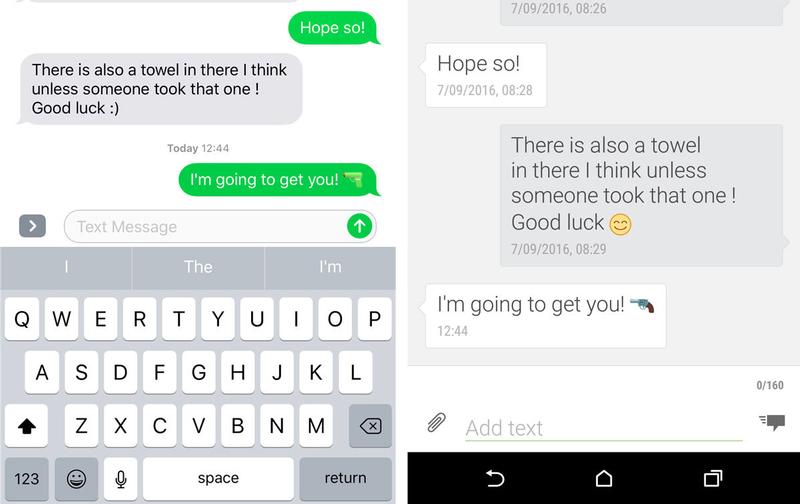 On the other hand, we like the expanded range of emojis and hope to see more included in the future. Read more: How to use Messages in iOS 10 and Complete guide to emoji on iPhone and iPad

Big news! Apple is finally letting us remove Stocks, Tips and various other preinstalled apps from our iPads and iPhones.

Technically only the user data is deleted, while the app remains hidden on your device, taking up (a small amount of) space. But it’s still a biggie. We explain how it all works in a separate article: How to delete or hide any app on an iPad or iPhone. 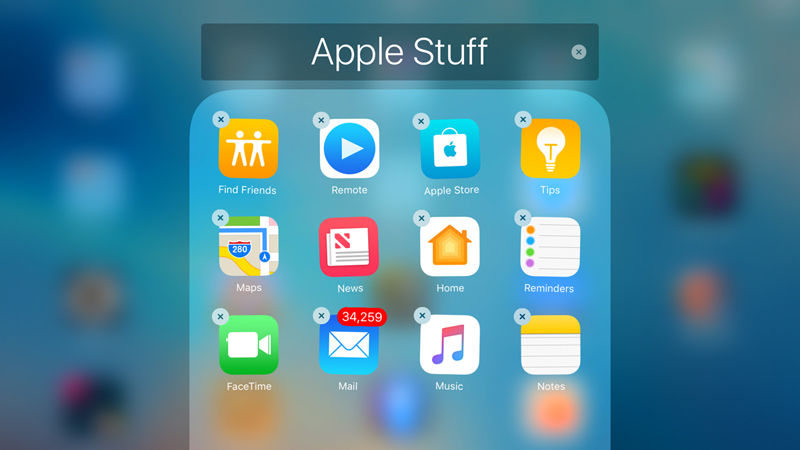 The Apple Music app has received an update, where it has had a visual redesign and now has lyrics. You’ll also be pleased to know that you can continue listening to your music whilst taking Live Photos. We like the additions to the Music app, but feel that Apple could still add more to the app.

Lots more on that here: Complete guide to the Music app in iOS 10.

Siri is now available to third-party developers, meaning you can use Siri in non-Apple apps. This change really opens up the platform and allows a greater number of apps to be controlled by voice.

We like the approach by Apple in being more open-source. Read more: How to fix the most common Siri problems

RAW images can now be taken on iOS devices, with Apple announcing support for the iPhone 6s, iPhone 6s Plus, iPhone SE, 9.7-inch iPad Pro and later devices. The feature is great for those who want full-resolution images from their iPhones and iPads.

The Photos app in iOS 10 has also received an update, with the inclusion of artificial intelligence. Apple announced that the Photos app will be able to draw together photos and videos by place, people (here’s how to correct any misidentified faces) and time where it will automatically create a highlight reel.

This is a brand-new app: a hub from which you can control all of your HomeKit-compatible smart-home appliances.

If you open up Home, you’ll see all your HomeKit-compatible accessories, no matter which company makes them, and you can easily control them all from one hub. Many of these will have 3D Touch shortcuts: you can force-tap and slide on a dimmer app, for instance, to adjust light levels.

There’s a nice feature called Scenes, which collects frequently used settings for various devices under a single button – so you could press the ‘Good night’ button to turn down the lights, turn down the thermostat, lock the door and so on. Read next: Best HomeKit devices compatible with Apple Home app

We mentioned predictive emojis earlier, but QuickType is getting cleverer in other ways too. If someone asks for a friend’s contact details and iOS thinks it knows what they’re talking about, it will scrape the relevant phone number or whatever from Contacts and offer it as a suggestion; if someone asks where you are it will offer your precise location.

QuickType will support the use of more than one language at once, too, although it’s not clear at this point whether it will work out on the fly that you user both English and French, say, or if you’ll need to select the languages you’re familiar with in Settings somewhere.

The default iOS keyboard has undergone a few changes in the beta versions, with Apple reverting changes made in the first betas, to the latest ones. As it stands, the iOS keyboard sounds have changed, with the space, return and backspace keys having a slightly different sound from the default keys.

This change could be seen by some as positive, but others are missing the old stock sounds.

As a minor, but legacy feature many will see a change in, is the way you unlock your iPhone or iPad. Slide to Unlock feature has been axed and replaced with Press Home to unlock. This broadly makes sense, because the swipe had become an inefficient extra movement: most of us who are able to install iOS 10 have got Touch ID, so we would put a fingertip on the Home button in any case. Now that is used to unlock the device.

If you’d prefer to simply rest your fingertip on the Home button to unlock the device instead of having to actually press the button, you can set this up in the Accessibility settings.

The following older devices can upgrade to iOS 10:

iOS 10 is available now, having launched to the public on 13 September 2016. Here’s how to install iOS 10. Think carefully before upgrading: Apple has stopped signing any versions of iOS 9, so it will be difficult to downgrade iOS 10 and go back to iOS 9 if you change your mind.

Note that iOS will be updated again in the autumn – indeed, iOS 11 is already at the beta-testing phase. Expect that to appear in September alongside the iPhone 8.