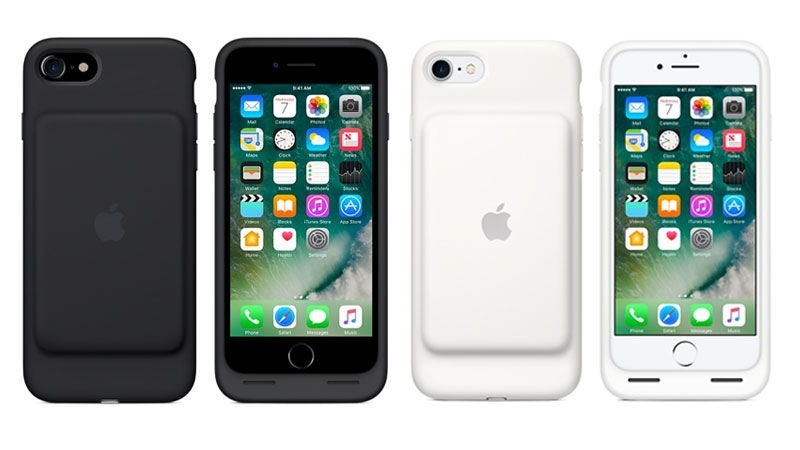 If you don’t mind the bulging humpback design (for the record it doesn’t really bother me) then Apple’s own Smart Battery Case for iPhone 7 offers decent extra battery life, robust knock and drop protection and intelligent power management features that will extend your iPhone 7’s battery life throughout the day without the need to plug it into a separate power source. The Lightning pass-through charging means you don’t need an extra MicroUSB cable that most other battery cases demand, and the case itself is comfortable and relatively lightweight.

While the iPhone 7 design isn’t that different to the older iPhone 6 or 6s it is sufficiently changed that you’ll likely need a new case for your new phone, and that includes battery cases for the iPhone 7.

Apple says that the battery life of the iPhone 7 is two hours longer than with the 6/6s, which is great but sadly not enough to get many of us through a busy iPhone day.

There are plenty of great power banks available that can be lugged around with you, but you mostly need to carry a cable too. See Best Power Banks & Portable Chargers.

That inconvenience and weight is much reduced by fitting your iPhone in a case that includes a built-in extra battery.

There are some terrific battery cases for the older iPhone 6/6s, but few right now for the 7. Check out Amazon UK or Amazon US as more become available. Be careful though as some cases claiming to be for the iPhone 7 are still just 6/6s cases – you can check quickly by seeing if they still have the port for a headphone jack.

At £99 (US$99) the iPhone 7 Smart Battery Case is not cheap, but then what do you expect when buying an Apple-branded product.

Check it out here from the Apple Store online.

As other battery cases become available for the iPhone 7 you’ll have a wider choice and cheaper options but for the time being that’s what a battery case is going to cost you.

While the 6s Smart Battery Case (with its rather weak 1,877mAh capacity) promised to charge your iPhone and battery case simultaneously for increased talk time up to 25 hours and Internet use up to 18 hours on 4G, the 7’s Smart Battery Case claims 26 hours talk time and 22 hours on 4G. Video playback time is also 4 hours longer, according to Apple.

The new Smart Battery Case has a decent 2,365mAh charge capacity. As the iPhone 7 itself has a 1,960mAh capacity this means that theoretically the case should be able to recharge a dead iPhone 7 and still have 17 percent charge left. In practice, however, you’re unlikely to get more than the one full recharge, but that’s still a great power extension when you’re away from a power source.

2,365mAh is still a light capacity compared to most battery cases out there. Mophie’s Juice Pack Ultra packs 3,950mAh, enough for a recharge and a half. But Mophie doesn’t yet have a battery case for the iPhone 7. See Mophie Juice Pack reviews.

The iPhone and case are charged simultaneously via the iPhone’s Lightning port. Most battery cases require a MicroUSB cable for case charging so the Lightning option is an advantage for Apple, negating the need for extra cables. See Best Charging Cables for a look at some we really quite like.

The Smart Battery Case doesn’t have an On/Off button (which Steve Jobs would have approved of). It starts charging the iPhone as soon as it’s attached. So the iPhone draws power first from the case, before using its own internal power.

This will take some getting used to as most other battery cases allow the phone to drain its own battery first, and then use the extra case battery. This means you should know you have back up when you need it, rather than finding out both phone and case battery have been used up.

The case constantly ensures that the iPhone will have 100 percent charge, as long as it can. It’s slightly concerning to see the phone’s battery saying it’s at 100% but still see the charging lightning bolt displayed, but we presume this type of power management is actually better for battery maintenance than user-operated management. See Phone battery charging tips and Tips to Boost iPhone Battery Life.

There’s no LED battery life indicator on the exterior of the case either. Battery status is instead displayed on the iPhone Lock screen and in the Notification Centre. You can charge the case without a phone inserted, and here’s where you can see a little LED within the rear cover (normally hidden by the phone), which indicates if the case is fully charged or not.

Unlike the iPhone 7, its Battery Case is not waterproof – which is an inconsistency Apple really should have addressed. What’s the point of a protective case that’s less immune to ceratin types of damage than the precious device itself?

The new Smart Battery Case sports the same hump-backed design as the original. Many people find it ugly, and it must be admitted that it’s a bold and unusual design from the Apple slimness fanatics. It’s maybe what an iPhone would look like if Apple put a decent-sized battery in it in the first place rather than obsessing over ever-slimmer designs.

The extra battery is not exactly hidden in the bulge, but it does keep the ends of the case relatively slim, which can’t be said of the Mophies.

And despite the odd looks it is comfortable to hold and keep in your pocket. Its soft-touch rubbery silicone feels great, and the soft microfiber lining is gentle to your scratch-prone iPhone.

With the case’s soft elastomer hinge it’s easy to slip the iPhone in, and once it’s in there you don’t really need to remove it. We like the fact that it’s a one-piece design as other battery cases come in two locking parts, which can sometimes detach and get lost or broken.

Of course there’s no headphone jack port, as the iPhone 7 has no need for such things. This does mean that if you’re using the headphone jack to Lightning converter you can’t charge either phone or case when listening to music at the same time.

Owning a battery case doesn’t just give you longer battery life, it should protect your phone from everyday knocks, drops and scratches. The Smart Battery Case for iPhone 7 feels robust enough to save your iPhone from most daily damage risks.

If you have the older iPhone 6s Smart Battery Case you can still use this to charge up the iPhone 7, but the case overlaps the new camera, which is not ideal. All the other ports (Lightning cable, Volume and Sleep/Wake) buttons, do line up and work, however.